I acquired some more trenches from Ironclad Miniatures when I was at Sheffield and recently finished painting them. The one problem I have is with the heavy weapon positions, which unfortunately are a bit too small for my bases to fit in. Therefore I purchased more of the half round positions so I could use them at front and back of the weapons. They also had some new items, a wooden and a concrete pillbox. Both are very nice, so I bought one of the wooden ones, but it still is a bit too small for my heavy weapons. 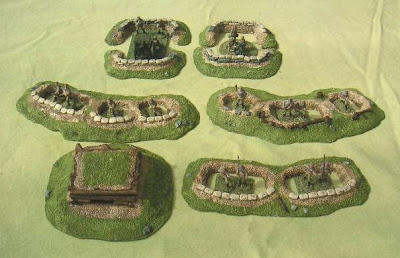 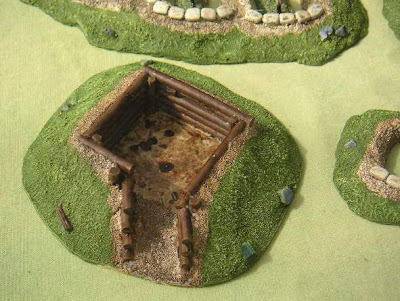 On the workbench (April)

Progress is quite slow given the good weather and the backlog of outside work needing to be done. Current work on

Plus I'm about to start on the 15mm Visigoths (that my elder daughter promised to paint several years ago) and I hope my eyesight can cope. (I've also just discovered some 6mm Visigoths in my stash as well, but they seem less intimidating)

Over the years I have used various rules, here are the ones I currently use with my figures:

6mm Ancients - all based as 15mm but with 4x the figures for DBA.

20mm TYW - my own variant on DBM (before DBR was released) and tried the TYW version of Warmaster published by the P&SS US equivalent.

20mm Napoleonics - still trying to find to right set that provides the flavour of the period, uses big armies, but on modular bases for ease of playing. Given I have over 4,000 figures finding a set that doesn't require major rebasing or changes in unit sizes is important.

6mm WW1 - still unused - and looking for some rules

20mm Colonial/Rif - various skirmish sets, not yet settled on a single set yet.

20mm WW2 - Rapid Fire dominantly, though I do have hankerings for our old Bath Wargames Society Rules.

6mm WW2 - mostly used for solo games so my own simple rules.

20mm Vietnam - tried various rule sets, still to settle on the right one.

20mm late C20 wars/actions still working on the figs, but a variant of AK47 is the favourite so far

WW1 Naval - still not used yet

I do use other rules, but with other peoples figures.

Thought I ought to summarise what I've got and play with, e.g. frighteningly large amounts of some periods and gaps in others

6mm Ancients (based for 15mm DBA so 4 times the figures per base) - Byzantine, Huns, Sassanid, Norman, Saxon, Viking.

25mm ECW an infantry and cavalry regiment for either side

I have always been impressed by the buildings in Charles Grant's book "The Wargame", so a while ago I built some similar structures for my SYW armies. Each building is mounted on a 120mm square base, which provides sufficient room for a complete regiment. For strength they are fixed to the base and the roofs are fixed as well 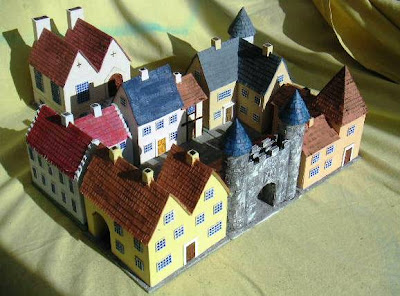 The buildings are either positioned on one side of the base or as an L shape, or covering the whole base in the case of the town hall (at the back). I still have to build two more straight sections so the whole town forms a square with the town hall in the middle. 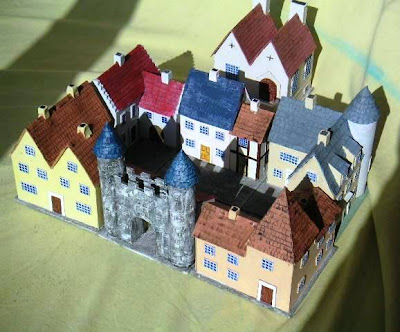 They are all constructed in foamcore and cardboard with thin card roof tiles/slates. The couple of extras will probably be timber framed.

They are also shown in the background of my Polish Renaissance haiduks.

Possibly the last cavalry unit I'll paint for my White Russian forces, I bought two packs of the Strelets Russian WW1 Hussars. The uniform is mainly the normal summer cavalry uniform with only an officer and a trumpeter in actual hussar uniforms. 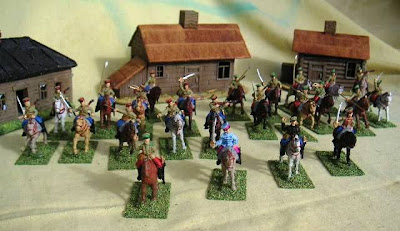 I intend to use the officer figures as colonels and painted two of them to match the uniforms in the Osprey RCW books. The one in the black leather coat for the whites and the gaudy hussar for the reds. 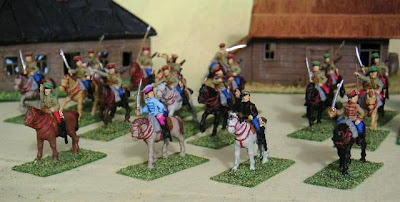 A pic of one of the 10 man units left 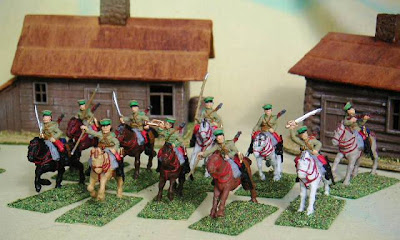 Just finished these two units of haiduks for my renaissance Polish army, They are not completely correct as they are based on the most conveniently available figure, the Russian Strelets by Zvesda. They are painted in the correct colours, but the costume is not an exact match
. 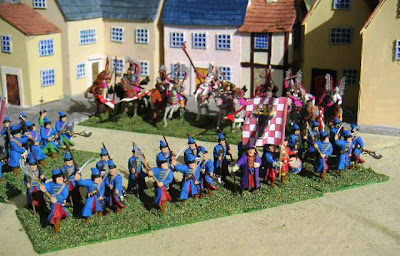 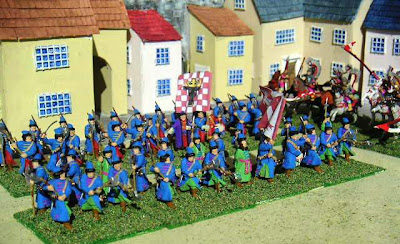