Two new wagons from HaT. As with all their recent production they are in a soft semi-gluable plastic that has less detail and the flash is difficult to remove. Worse of all it the erratic nature of it's response to "normal polystyrene glue, it's sometimes OK and then not. I think the plastic must flex thereby weakening the join so that the glue fails.

First off is the field forge, I assembed it in operation with a few extra figures looking on. 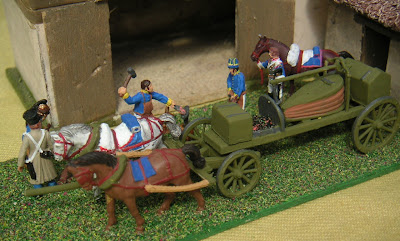 Then there is the wurst wagon used for transporting medical personnel, it doesn't look the safest or most comfortable means of transport 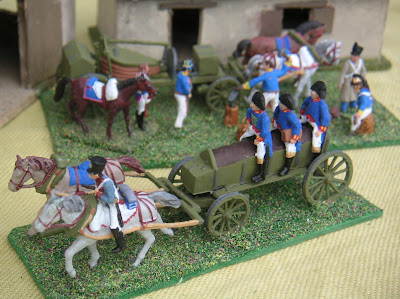 I've still got two more of each and I'll certainly modify a forge to use in the SYW, and the other wurst wagons will be used for the "flying artillery"

Something old, something new

I got bored with the cossacks, the curse of painting irregulars again, so I "quickly" painted the Strelets guides of napoleon. They actually represent the 2nd regiment of eclaireurs (scouts) of the imperial guard. It was quite a short lived unit raised in late 1813 but saw a lot of combat during the campaign of 1814.

Many years ago, I created a squadron (old guard) of the 1st regiment (scout-grenadiers) from the Airfix hussars, so given that I had 12 figures I used the extra 4 to reinforce these up to full strength (for my rules) by adding some young guard. They are not exactly correct as they have the tapered shako.

The rest made up the 2nd regiment (scout-dragoons) which are fairly correct except for the saddle cloth which seems to have never been used. I was tempted to give them a wintery base as that was the conditions in which they fought, however I decided to flock the bases to keep them consistent with the rest of the Napoleonics.

Now back to the cossacks, etc.

Seems a bit of a gap, but I've spent quite a while working on the kitchen and I've actually finsihed my WW2 Italians except for basing and I'm waiting for some more bits before I do that.

Therefore it's onto the main task, my renaissance cossacks from orion. I split out the armoured version so I could use them as pancerni with my Polish army. I know they are not perfectly correct but they do look the part. 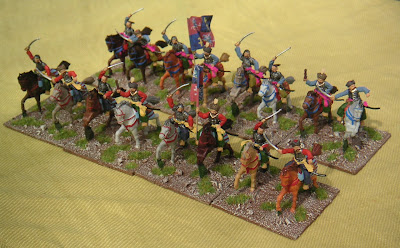 The flags are those for Lithuania provided on the Historical Flags for wargamers site Alex's Flags, which are just the job.

Various other bits are in progress so I'll see how well I do by the month end.

To start a Classix Ford 10cwt estate car, repainted as a command car for my BEF, I've already used one to make an ambulance for my Italians so I had to have at least one acting under it's true colours. 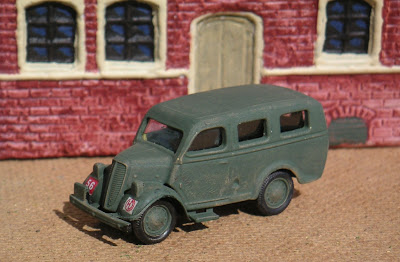 An M20 Greyhound, this is the Italeri model and it turned out OK except for the wheels. I used the wargaming version provided, but in retrospect I'd have been better using the standard model as the wheels are hollow at the back. I'm not sure how I will use it, as it is very large compared to my Frontline M8s (I think they may be undersized for 1/76). 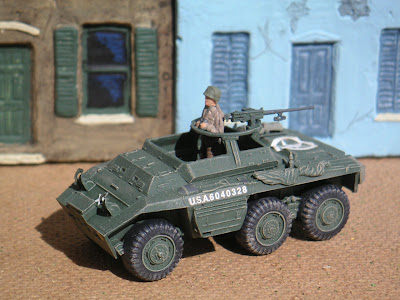 Lastly a pair of M40 GMC, they were used only at the close of WW2 and the decals I used were for a unit operating in Korea. Strictly I should have got the Fujimi M12, but I couldn't find any at a reasonable price. I need one M12 for a Bulge scenario, but I'll just use one of these instead. 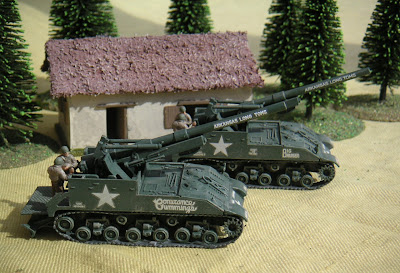 Thats all for now.

Yet more macedonians, this time bought and painted to fill some gaps in the Hellenistic light infantry. My opponents got a little confused sometimes where I used the staff slings to make up the numbers of archers. 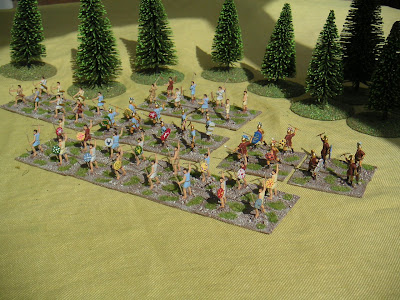 Like most of the army these are bulk standard Hat figures

On the workbench - April 08

The painting station seems empty now that the Parthians have gone. It's been a moment to take stock and shuffle some priorities around. I won't add anymore to the Parthian army until I've played at least one game with them.
So my current/ongoing plans are

I'm still trying to find some suitable 20mm figures for French revolutionary generals for Desaix in the Desert game.