On the Workbench - September 09

Is it September already? I've decided that this will be a medieval month so it will be:

Just finished some cannon fodder for the Ottomans. This is as close as I could get to Tufekcis by modifying the Orion Janissaries by cutting down the hat and adding a tissue paper turban.

The Orion figures are better for irregulars as there are only two figures in each pose. 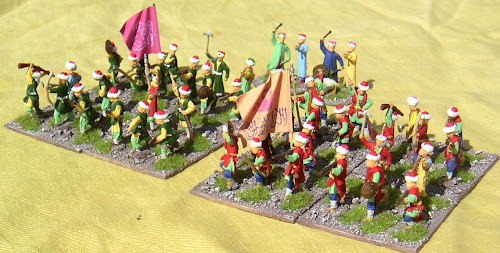 The musicians at the back are a bit of decoration to accompany my Ottoman commanders
Posted by Fire at Will at 12:57 4 comments:

I acquired a third Matchbox Wespe as part of a purchase and rather than reselling I decided to add a Muntionspanzer version to my existing force. Overall 683 standard Wespes were built along with 158 Muntionspanzer Wespes. I couldn't find any interior details for the vehicle so I simply added the blank plate that covered the apperture and gave it a canvas cover over the fighting department. 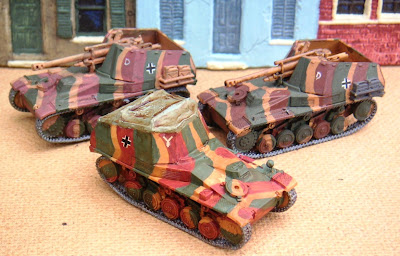 When I photographed it up against the originals it was vary apparent how humbrol sand and dark green paint colour has changed over the years, assisted by fading I'm sure.
Posted by Fire at Will at 11:13 No comments:

Phil Olley's blog raised the issue of army planning and I admit that although I try to plan, my armies just grow like “Topsy”. So I thought it was time to explain my own approach having passed 22k figures.

The origin of my lack of discipline stems from my use of the Springwood plastic Napoleonic figures. At this early stage of my wargaming life I had two small Napoleonic armies based on Airfix figures, but I decided to widen my scope to cover the Prussians and Russians. Springwood offered packs of 48 figures, 12 each of British, French, Russian and Prussian line infantry and I bought enough for 12 units of each. It also linked with the bath Wargames club plan to refight Borodino. Of course Springwood didn’t stop at one set but both upgraded the quality and increased the range of figures, the current size of my Napoleonic armies reflects this. Also given the wide number of Napoleonic armies I now have, any new figures for the period have an instant attraction such as the Strelets Eclaireurs

A long time back I decided that (a) I would stick to plastic 20mm (b) I would always build at least two sides to a conflict and (c) The army should fit on an 8 x 6 table
My SYW army is still the best example of my approach to army planning and one where I have not subsequently made any changes to it. My major constraint was using just he plastic figures available, but Revell had provided enough to cover most of those needed. Like many of my armies I worked on the premises of twelve 24 figure infantry units, in the period would give me twelve 8 figure cavalry units for a 3:1 ratio typical of the period. For the horse this worked out simply into equal thirds of hussars, dragoons and cuirassiers. I kept the Prussians to 12 units, but these were 8 Line, 2 Grenadier, 1 Frei Korps and 1 Jaeger. The Austrian foot was larger (to compensate for the quality?) with 8 Line, 2 grenadier and 4 Grenz. It meets all of my three criteria

Another pair of armies was for the Anglo-Zulu war, once Esci released the figures I estimated the rough numbers required and for most games these are what I stick with, however I did subsequently buy a small number of extra (metal) figures to enhance the army. Again it meets my criteria.

I’ve also had failures, like the Crimean war, where Esci released Russian infantry/artillery and some British cavalry, so I have subsequently been wary of starting a new period until sufficient figures are available. Btw, Strelets now have some excellent figures for the period, but…

Along with the Naps WW2 is the other period that just grows it seems that every scenario needs some additional vehicle that is not in my collection, and there is the constant flow of new figures for the period. Having a large number of armies, I am still managing to resist the allure of Poland 1940 and the Far East campaigns. The one constraint that has helped here is my attempt to use 1/76 scale wherever possible for the vehicles

My ACW armies have very much stabilised as I have more than enough to fill a table and luckily there are not that many “pretty” units you can add.

Ancients/Medievals are a lot easier as I just have to produce enough figures to meet the requirements of the army list.

Linking back to Phil Olley’s post, my TYW armies started out as a simple project, once Revell produced the figures, but gradually grew once I became committed to a demo game for the Pike & Shot Society at Triples in 1997 (I think). This was Lutzen in 1632 and I built my armies to give a scaled down representation of the forces involved while not representing every unit involved. Since them with a few minor exceptions the armies have stayed unchanged until now when Phil is tempting me on his blog and the spare figures in my stash seem to demand to be used!!
Posted by Fire at Will at 21:01 4 comments:

literally a "furniture van", it's a real box on tracks. 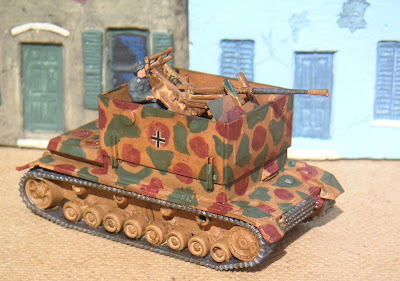 I had to construct four new sides as the original was missing three. There were two styles of side wall one with the top sloping inward and the other just made of a flat plate, so naturally I made the flat plate version. Unfortunately I only discovered to late that the small plates on the front and rear were made to fit the side wall when it was lowered to about 45 degrees, typically I had copied the small plates for the sloped sided version!! Hopefully the camo will hide the error most of the time.

Here's a picture of the original Eidai Mobelwagen as purchased. 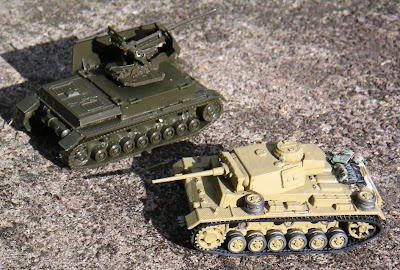 In retrospect perhaps it would have been just as easy to build one from scratch on an Airfix panzer IV chassis.
Posted by Fire at Will at 07:07 1 comment:

Just updated my figures database and I'm please to announce the passing of another milestone, I now have over 22,000 painted 20mm figures.

made up as follows

I'm not sure why I painted so many as I can't see myself using all in one game (but that is now the challenge) in retrospect it would have been better to have used two of each pose and traded the rest.

The force is made up of the contents of two Caesar sets WW2 Underground Resisters (Partisans) and Partisans in Europe. There are some lovely figures but for some reason some of the poses only have one figure. I particularly like the figures in trench coats (front left) and the will make excellent gestapo, etc. I managed to find a couple of MMGs and a mortar in my bits box so the partisans can have some more substantial firepower. My only other quibbles are the large number of SMGs and the thickness of the bases.
Posted by Fire at Will at 13:48 1 comment:

The 6th edition army lists allows two options for the Hypaspists, either as phalangites or as shown here as Light Medium Infantry. I have created the maximum allowed in the list, 36 figures to give me maximum flexibility. I have split them into two units one with armour the other without.

The figures were all from the latest HaT set covering the Hypaspists and Macedonian command (not yet reviewed on PSR). Unfortunately they are in the new soft plastic which means the figures flex quite a lot so I'm worried about how long the paint will stay on.
Posted by Fire at Will at 13:39 No comments:

Another chance to use my English heritage membership, this time it was Stonehenge while visiting family in Wiltshire. It was an early start on the Sunday, but even so the site was already swarming with foreign tourists 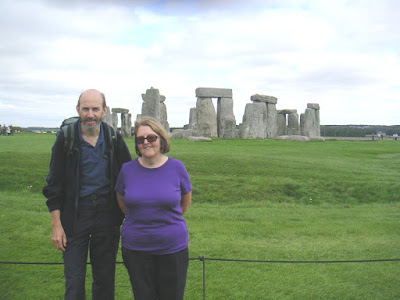 It was just as well that I didn't have to pay as you don't get much for your money. My earlier memories of the site were of wandering among the centre stones, now you can't get within 20m of them at the closest point. Apart from the audio guide there is no interpretative material at all.
It was much better wandering over the nearby tumuli and the cursus, which did have signboards up.
It was then onto the Westbury White Horse and nearby hill fort before returning for tea. Again a disappointment as the surface is all concrete, It was done in the late 50s so I must have been quite young when I last visited and remembered the rough stone finish and grass eye.
Our Monday return included a trip to Kenilworth, which must still be one of the most impressive castles in England and far better in terms of presentation than Stonehenge. 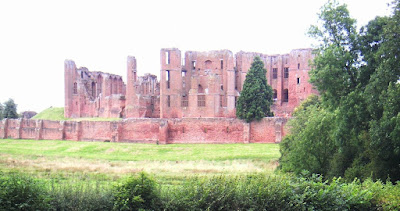 Part of the highlight was the new Tudor rose garden. quite impressive. 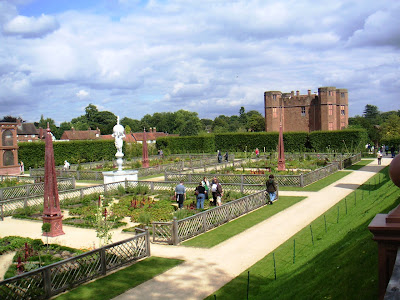 At long last it's finished, it has been a bit of a stop/go project as I struggled with each stage, especially the big frame aerial at the back. The model is not an exact copy of a specific model, more a generic version, still it will look great leading my early war (1941) panzer battalion. 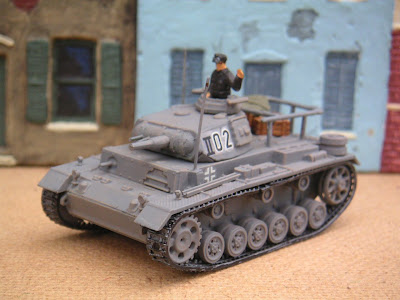 A big thanks to Alan McCoubrey for providing input
Posted by Fire at Will at 22:54 1 comment:

Earlier I showed some spare Strelets ACW Confederate commanders I had acquired in a trade, those were the one's I couldn't find a way of using for this project.

The heads and infantry came from the horrible Italeri 1805 French Infantry, they were awful to prepare due to the excessively hard plastic and the curve needed to remove the hat from the head. Normally I would have done a complete head swap but the stupidly high collars was a total disincentive.
Posted by Fire at Will at 20:23 2 comments:

Continuing the tidy up, here is some more figures I picked up on the B&B to boost my Macedonians

All Zvezda ( or Italeri) figures Greek cavalry in front, Thracians behind.
Posted by Fire at Will at 20:19 No comments:

These are the Strelets figures and they have a lot of character. despite having padded armour, etc, they are classed as light cavalry hence the larger bases. I can also use them if needed as Crusader turkopolen or even mounted archers.
Posted by Fire at Will at 20:13 1 comment:

I exploited my English Heritage membership last Sunday and visited a number of sites in Shropshire.

First off was Haughmond Abbey the remains of an Augustinian Abbey 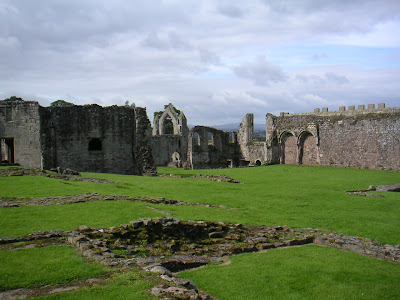 Then onto Wroxeter Roman city, where not much remains above ground except parts of the bath complex. We planned the visit to fit in with one of the EH events and getting a guided tour made it well worth while. It was rather strange after being inside actual bath complexes at Pompeii and Herculaneum earlier this year 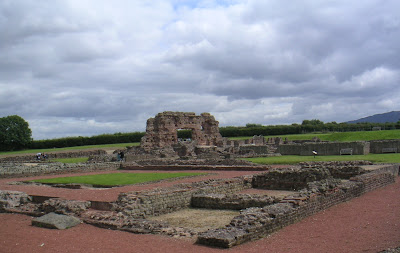 Then a quick diversion for a Sunday roast at a local pub and a pint of Hooky Bitter and then a walk up the Wrekin which is topped by the hill fort capital of the Cornovii. When they became Romanised they moved to Wroxeter.


Finally on to Boscobel house where Charles II hid after the battle of Worcester 1651. The Royal Oak is now a sorry site, but a new sapling is growing up alongside. 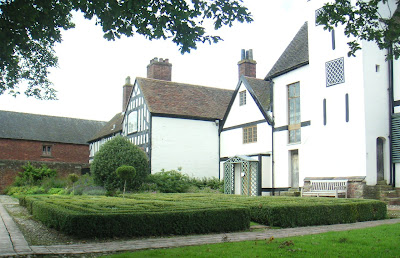 Part of the oddments for painting were three Companions and some Thessalians, this time they were picked up as part of a bundle on a B&B and will enhance the flexibility of my Macedonians.

On the left is Alexander inspecting the new arrivals!!
Posted by Fire at Will at 20:09 1 comment:

On the Workbench - August 09

I'd thought I'd kick off this episode with a view of what is physically on the workbench. As can be be seen most items are nearing completion. The trays enable me to keep some degree of organisation and allow me to easily swap subjects when I feel the need. 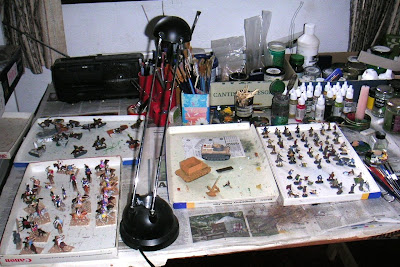