Off to Vapa in the morning

An early start tomorrow to get across to the Vapnartak show in York. Should be a great start to the wargaming year, hopefully the weather will be OK. If you want to stay hello I can be found on the Lance & Longbow stand.

If keen you can refight the battle of Hexham 1464, which will be played using Lion Rampant Rules, or you can buy some of my rummage, the proceeds from which will go to the Army Benevolent Fund.
Posted by Fire at Will at 20:39 1 comment:

It's a nice feeling when a conversion gets completed. I can always spot bits that could be improved, but these are certainly good enough for wargames use. 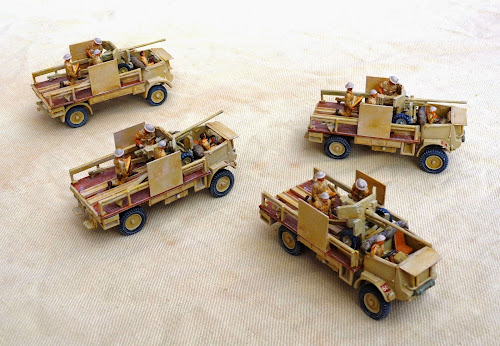 For those that like to see a comparison, here is one alongside the Britannia version (Resin/Metal) 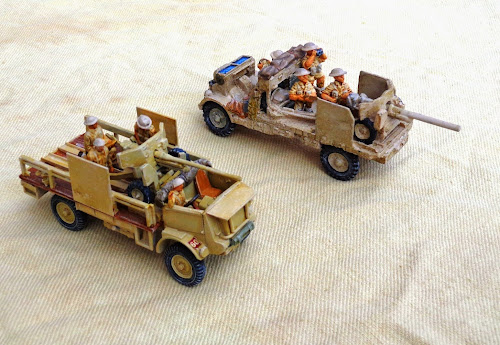 Three of the models will be used for the Motor Battalion and the other will be used with the others as needed.
Posted by Fire at Will at 07:59 5 comments:

More for the Sudan, but compared to my last batch of Egyptian Artillery this pair of guns have limbers. Gunners and guns are the Strelets Turkish Artillery 1877. 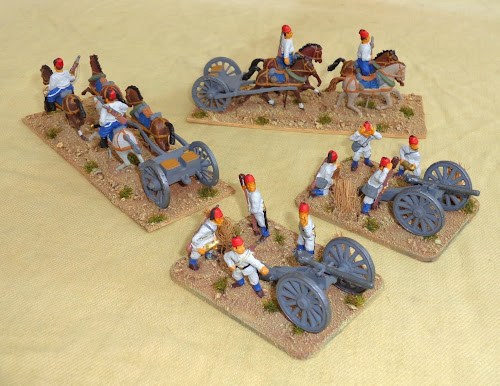 The limbers are from the venerable Airfix Waterloo RHA Artillery, off which I still have quite a number, but these are the last of the limber horses. Outriders are some of the "spare" Strelets turkish cavalry, quite well armed, but the Sudan isn't the safest place to be!
Posted by Fire at Will at 07:17 2 comments:

More Egyptian cavalry for the Sudan

Back on track and some more Strelets Turkish cavalry painted up as Egyptians, just like before the officer has been promoted, this time to the Egyptian CinC hence the Khedival flag. 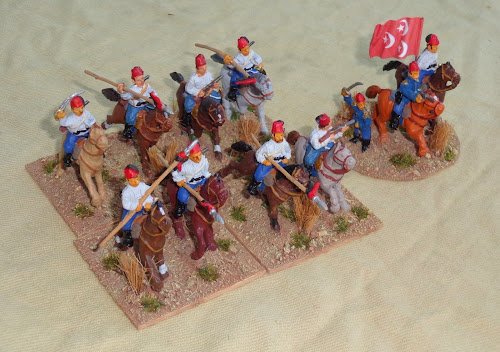 Last few bits added, loading ramps and the side and front screens. Some more parts are now painted. 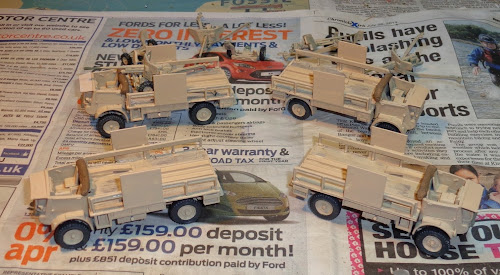 Thanks to input from Charles, the 6 pounders have had their muzzle brakes removed

I picked up another pair of the Italeri fast build version, while buying another bargain They were assembled and painted almost at the same time as the Shermans. 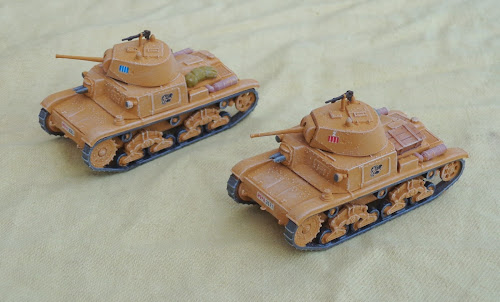 Further progress on the portees

Stowage compartments and the ramps for the forward firing gun position have been added. 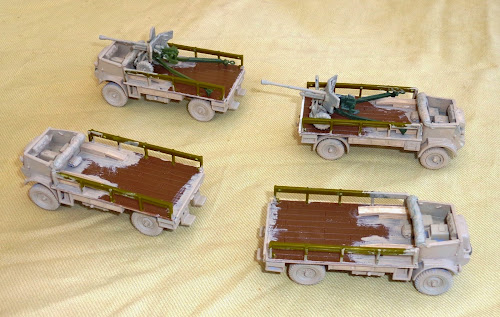 On the rear pair of portees I have shown the 6pdr in its alternative firing positions, but I think I'll opt for the forward firing position for them all.

Well the extra US armour did arrive and I decided to get them done. It's a pair each of the excellent Italeri fast build Shermans. To the left a pair of 75mm armed "Jumbos" and to the right a brace of 76mm. 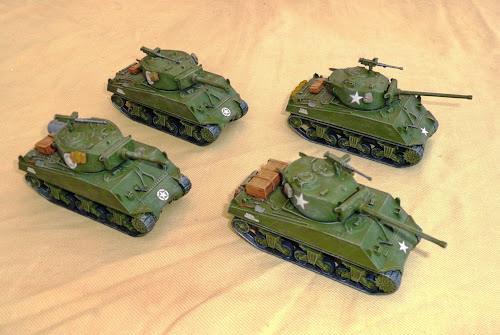 I was dissappointed to find the same hull had been used for both versions, the Jumbo should have a clearly thicker hull plate
Posted by Fire at Will at 14:42 4 comments:

More progress at last on the Portees, the cabs have been sawn down, the subframe built up and a new rear cargo bed added 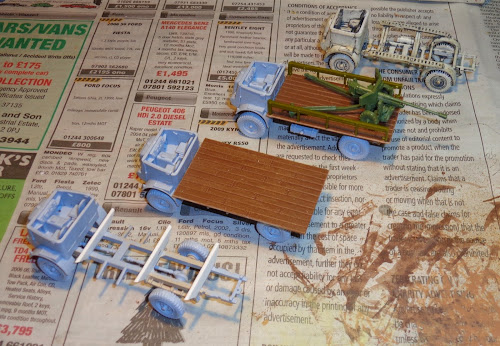 Here they are laid out to show the steps. Front - new sub frame, Middle - cargo deck added from Will's Planked Plasticard. Rear - side rails added - these were left over from the Pegasus US trucks, they are slightly too low, but give the right feel and are structurally stronger than anything I could scratch build. At the far rear is an old Bedford refueller that I'm also converting to a Portee.
Posted by Fire at Will at 11:46 3 comments:

Painting these was quite enjoyable as it brought back memories of the various "Monty's Desert Battles" fought two years ago.

I had always planned to add a proper motor battalion rather than the scratched up version using existing figures from various units, so when I picked up the Esci/Italeri 8th Army figures as part of a bundle I knew what they would be used for. 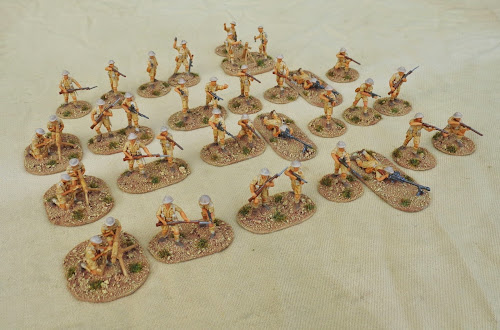 Not all the figures are Esci, the MMGs are Airfix. The chaps with the Boyes AT rifles are conversions using the weapons from the Sgts Mess British Small Weapons pack, and the Mortar crew are Matchbox.

During the sort out of my stash, I identified figures to create a third infantry battalion, which would round out my desert forces. The real temptation was that although they were Airfix figures, they were moulded in a very hard plastic. 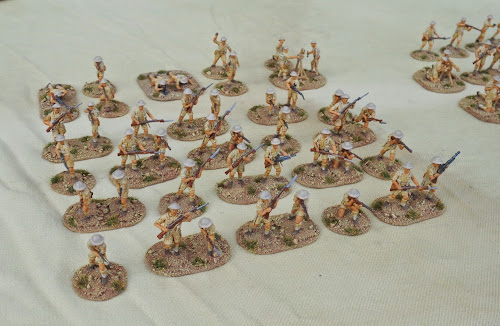 Seem to have got a bit behind with posting this, but here's what I'm currently working on

Well we had a fine and somewhat sunny day in Cheshire and with nothing else to do I have laid out my upgraded US Army as requested and as a final check. 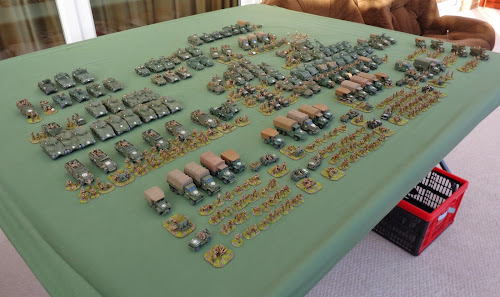 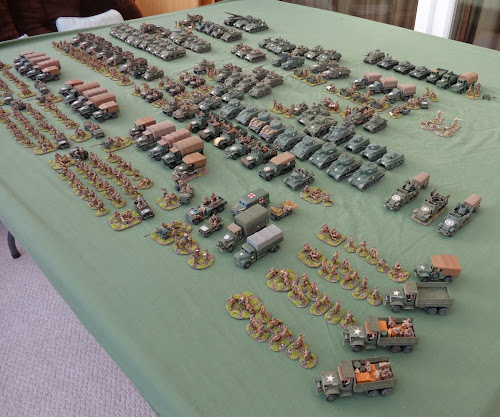 Some close ups
An infantry battalion 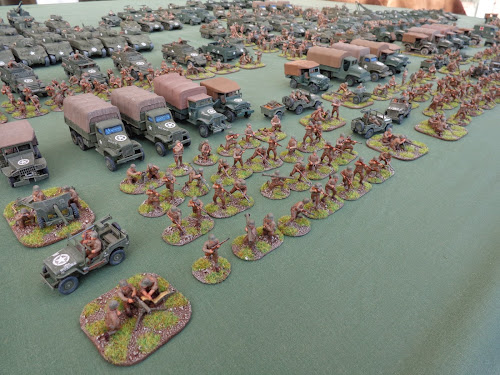 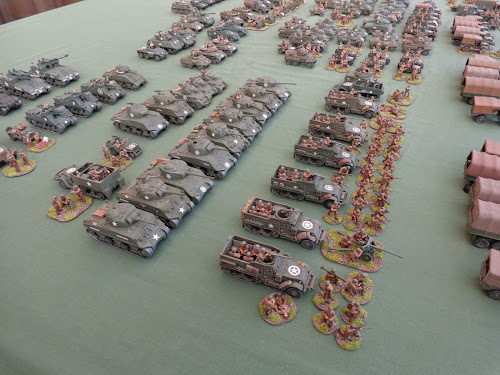 Armoured artillery battalion M7s, the M40s and M12 (the one I bought from Dennis) are add ons. Yes I do know the M40s are post war. 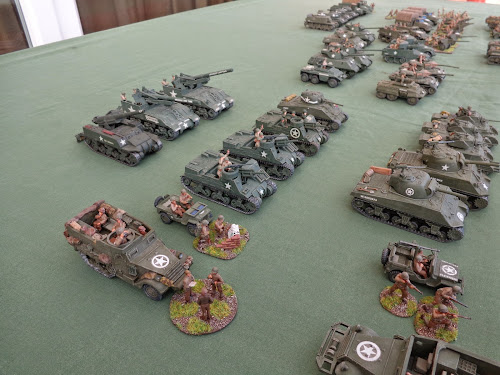 The Reconnaissance Squadron, quite a mix of M8 Greyhounds 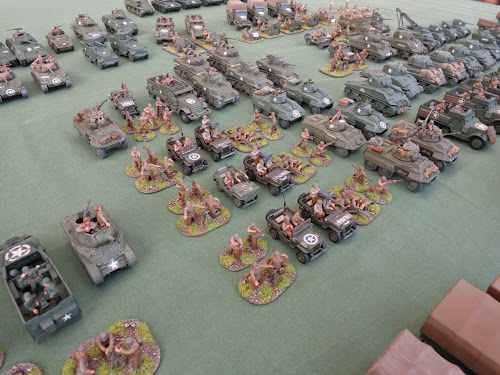 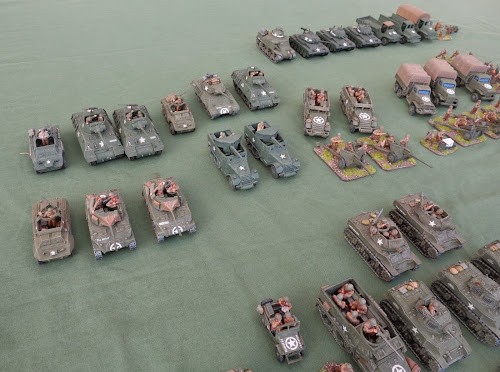 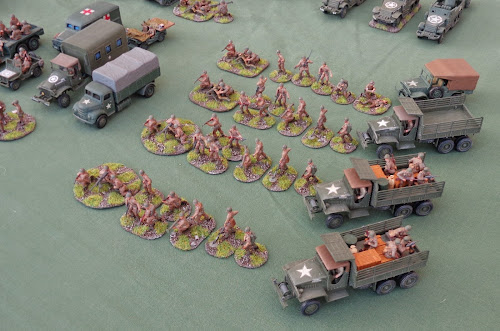 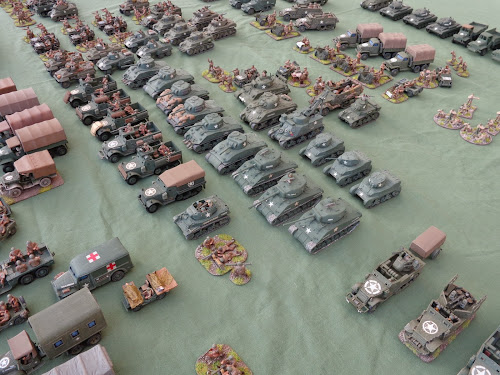 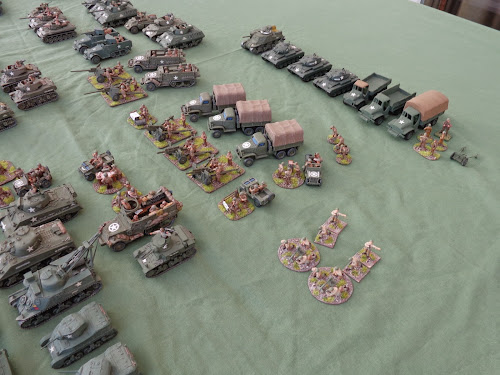 Still missing are
A pair of M3 Mortar Carrier Half Tracks - the Hasegawa ones are horrible. If I can find some cheap diecast M21s then I'll probably use them.
The Recce Elements for the Tank Destroyer units should have three dismounted figures.
Bailed/Dismounted Tank Crews
105mm short howitzer, I've have the crew all ready for it
M32B1 Tank Recovery Vehicle (UM do a nice one but it's hard to find in the UK)

What I'd still like to work on
Tidy up the M12 155mm GMC (but I'll wait till a game when I have to use it)
Some extra armour, an extra 76mm Sherman and a couple of Jumbo's would be handy (Subsequently bought)
Rework one M36 into and M10, or possibly find another Cromwell models of the M10
Gradually try and get a consistent colour across the army, especially with units.
Add a couple of 37mm AT guns so I can replace the 57mm and cover early war as well


Now Surplus to requirements, these will be sold at some future show (Proceeds to the Army Benevolent Fund)
Three old infantry battalions 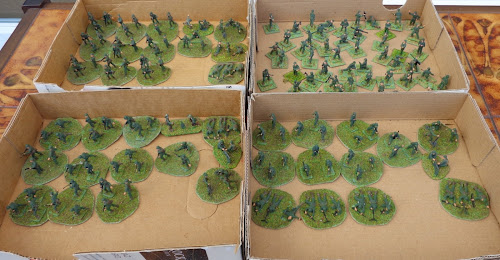 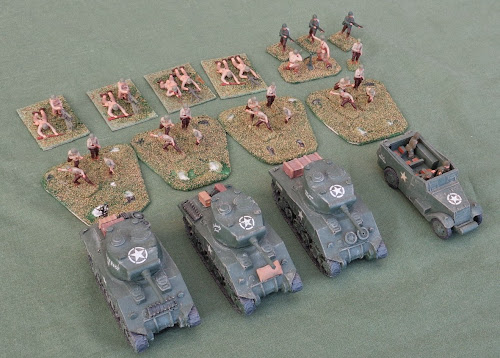 Not a lot of wargaming related presents this year, but an interesting bunch 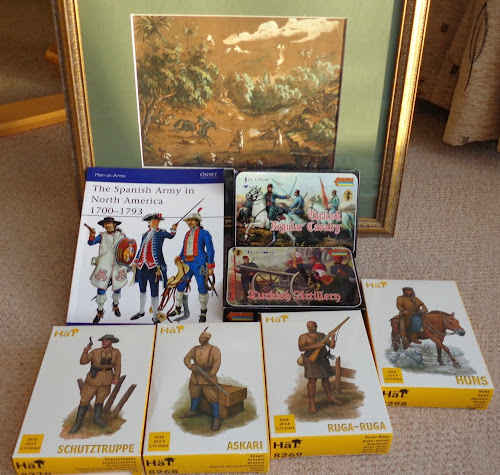 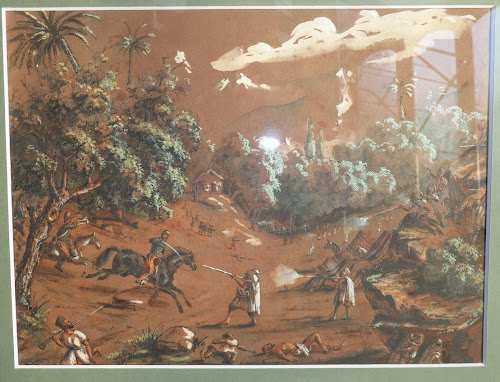 During my two weeks off-line (thanks a lot BT Openreach) last month I sorted through my stash trying to identify anything surplus to requirements. As the days drifted on I decided to try and rank what I planned to paint in some sort of order. Out of that came the following plan for 2015, of course if we manage to move house then who knows!

Major Projects (at least 100 figures, month or more in effort)


Minor Projects (in no particular order)

Labels: Commentary, On the workbench

Only just got chance to take a picture of the last unit off the painting table in 2014. The Saxon Kurprinz Cuirassier Regiment. 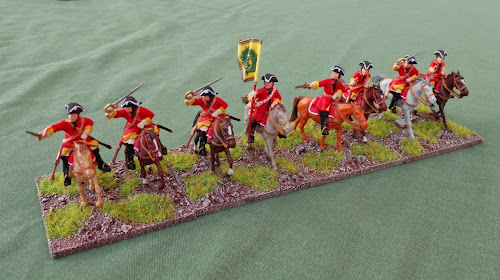 Luckily the coat is worn over the cuirass so the Zvezda GNW Russian Dragoons work fine, just a shame there are so few of them in a box, even so I may have to get more!
Posted by Fire at Will at 15:30 1 comment:

I managed to paint 1,534 items in 2014, which is quite reasonable give the time that I had to spend away from home, looking at the breakdown. Shame I couldn't achieve the same numbers as 2013 when I painted 1,794 items.

It’s obvious that WW2 dominated my painting and of that my new US forces were just over half the total. Another third was finishing off my British forces for NW Europe in the beginning of the year.

The big surprise to me was how few cavalry I painted and the large number of vehicle crews.
AFVs and Softskin vehicle number were also up, reflecting my decision to fully upgrade my US forces and the attempt to reduce the size of the stash.

The scary bit was when I looked at my purchasing, 183 boxes (kits, figure sets, etc) compared to 132 in 2013. So I’m not surprised that the stash only reduced by a single storage box compared to my plan of emptying two boxes.

Too finish with some more statistics, my current tally of 20mm painted figures now stands at 26,650, but the stash comprises 7,463 items.
Posted by Fire at Will at 20:33 2 comments: