Well, I'm just relaxing after spending the afternoon moving tables ready for our local wargames show "Gauntlet". I'll be back in the morning but as I'm not involved in any of the competitions I haven't decided what games to take.

One nice surprise, when viewing TMP, was Tony De Lyall announcing an update of the computer version of my rules for the AWI. Just convinces me I need to set up a separate blog for my AWI stuff, as apart from the rules on the Freewargames rules site (see links) I've not published some of the other correspondence/thinking on the rules.

On another forum there was a question about wagons for use in the TYW, so here's mine

The first picture shows two conversions from the Revell TYW artillery set, the one in the back with a barrel, was used the wheels and axle from the gun and a barrel from the old Airfix Scammel. The other was a complete scratch build except the wheels and axles from the limber and gun. It's basically a plasticard structure with some milliput additions. 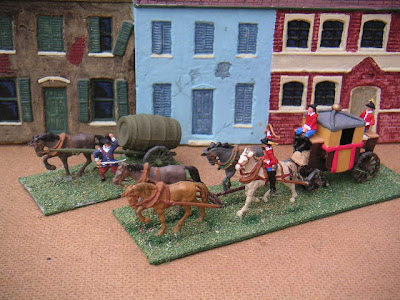 My other wagons are those the Airfix Waterloo playset, some of which were sold separately. They are very rare now. 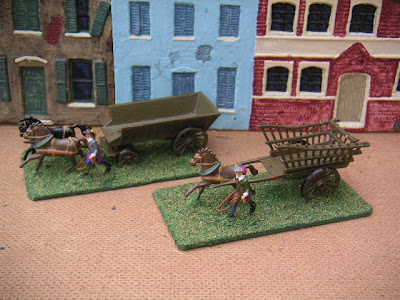 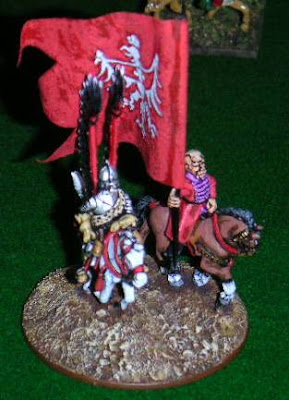 Not the best picture, but the Polish commander John Sobieski from the Kahlenberg game. A superb vignette, painted by Phil Olley I understand.

Well, I ended up being an Ottoman an the battle of Kahlenberg, and despite their best efforts the combined Polish/Imperial army failed to break through and relieve the siege of Vienna. It was a game of several parts with manic cavalry charges and counter charges on the flanks, but just at the point that the Polish hussars looked like breaking through they were charged in the rear by Ottoman cavalry that managed to disengage in time.

The picture below shows the Poles in full flow before the breakthrough, they then drove the Ottomans well back onto the ridge before the Ottoman cavalry bottom right managed to reverse and take them in the rear. 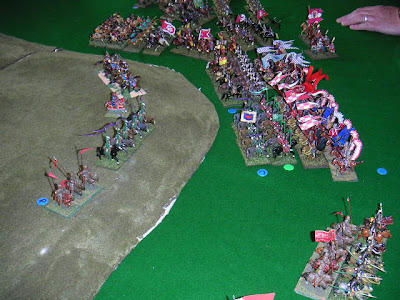 I held the Ottoman centre and after clearing any Imperialist away from the line of fire of my heavy guns in the central redoubt I gradually gave ground before counter-attacking and driving them back below the ridge line.

A great day out with a bunch of friends.

The only downside was seeing Polish Hussars, Turkish Janissaries and GNW style troops in action at the same time, I've got the first two and had been resisting moving into the GNW/League of Augsburg era as it would be yet another period, but I think I lost that battle today.

Perhaps another point to ponder was being given a pile of surplus plastic Zulu war figures, do I expand my existing Zulu war armies or what?

To me it seemed as busy as in the best September events. It was a different mix of traders, but the bring and buy had some good deals for once, I got some, but the vultures were in action as usual. The best buy was some excellent WW2 Vehicles with tanks at 3.00GBP; Trucks at 2.00GBP and Jeeps/Beeps were 1.00 GBP. And the Beeps were what I needed so I got 4 for the price of the standard kit which I picked up elsewhere at the show. I also got a couple of 250s for 3.00GBP each

I also picked up one of the new Frontline jeeps, the ambulance version for 3.00GBP. I don't need it but it'll look good on the table.

Under the Bed/Reiver had some nice figures so if I need any extra Italians for the 2008 big game I'll be getting some of them.

Ironclad Miniatures have some nice trenches sections, with some bunkers planned, (something for later) and I picked a supply dump set for 3.00GBP

Spent less than planned as very few traders had what I wanted. But well worth seeing everything in the flesh, helps when I get around to buying via on the next visit or on the internet.

The big regret was none of the traders were selling the latest plastic figure releases so I'm off to harfields to put an order in.

It was a great show for meeting up with people, I met a number of friends that I hadn't seen for years.

I'll post up some bits here early next week, but tomorrow I'm off to save Vienna from the Ottomans (or do I have to take Vienna?)

Just in time, I've finished the buildings before going off to Phalanx. This leaves a clear painting desk ready to deal with my latest aquisitions (I hope) 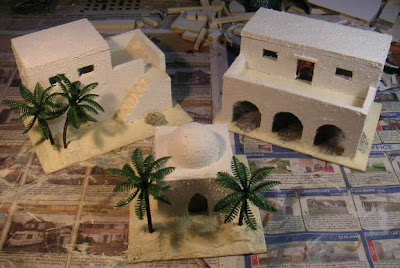 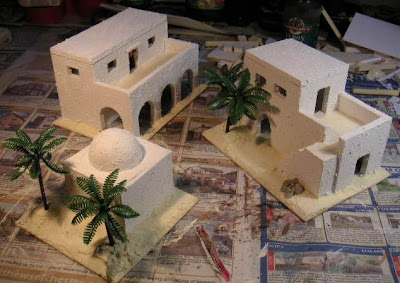 The buildings have now been based and the bases coated in tetrion. 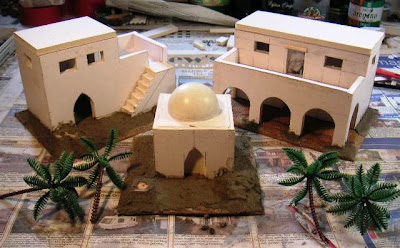 On the tomb and the house with steps I added some drilled wooden blocks before plastering. These blocks will provide a firm fixing for the palm trees shown.

Labels: Colonial, On the workbench, Terrain

Since I was in Bob the builder mode I moved on to constructing some additional "Arab" buildings to add to my existing collection. As before they are constructed from foamcore. The two rear buildings are based on pictures from an old Wargames Illustrated #10. The left building still needs its roof. The dome for the tomb comes from a damaged ping pong ball 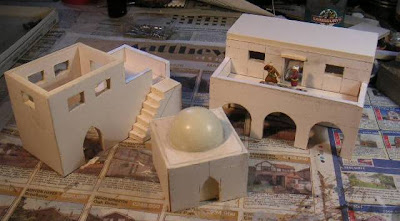 Once based up the buildings will be painted in while emulsion and then some old white textured paint (artex).

Labels: Colonial, On the workbench, Terrain 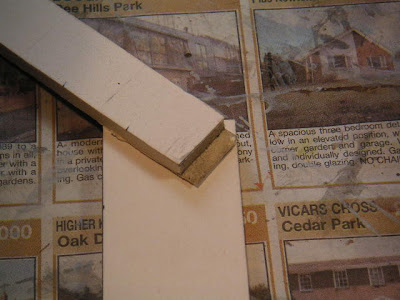 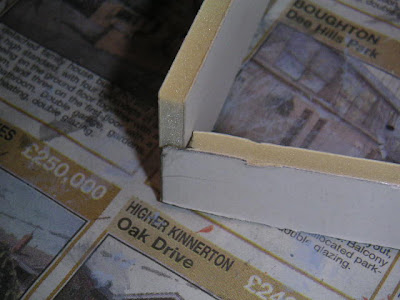 A view down at an assembled building complete with rebated corners 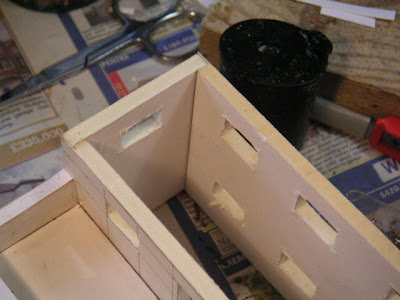 Having completed the last two buildings, see previous post, the town is now complete so here are some pictures. 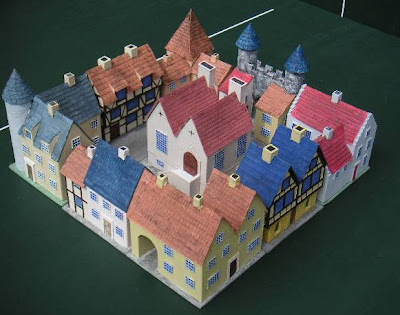 The corner building above provides one entrance 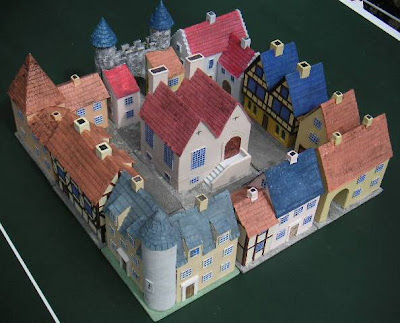 Below shows the old medieval gateway providing the other entrance 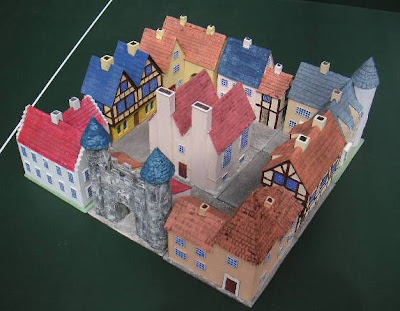 Another configuration as a single winding street 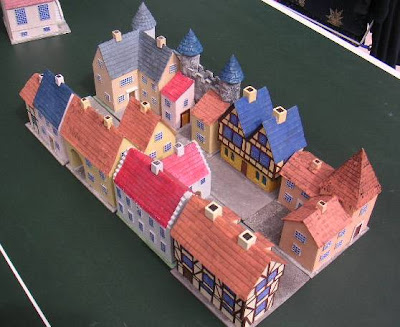 It could be split into two blocks of 4 buildings to make two small towns (the most common way I'll use it.

Well, they're completed. The final stages were painting the hardboard base grey and then washing it and the terracotta roof black to bring out the texture. The slate roof was a bit to strong so I dry brushed it with a pale blue/grey instead. The linka wall was was washed in brown ink, but it was one of those surfaces where the ink spreads evenly rather than gathering in the cracks (I wish I could work out in advance which paints do this) 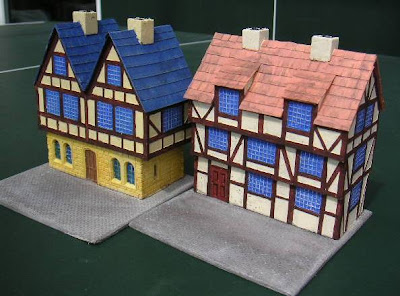 The doors were painted, then a bit of detail added with a fine pen. 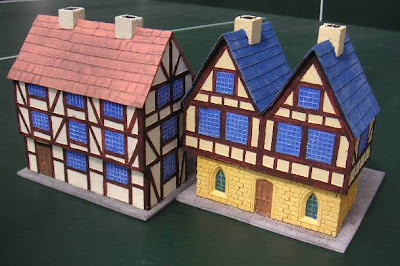 What would I do differently next time? The windows have come out rather too blue, this is despite using the same blue as previous buildings, it was the scrim for the frame that took a much lighter dry brushing than the old embroidery frame. So I'll use a darker blue next time.

Well, painting is now well underway, after the basecoat the windows were painted blue then dry brushed with to bring out the frames. The roof for this building was painted terracota to represent tiles (the other building will be blue slate). Then the hard slog painting the timber frame, done with a thinned down GW scotched brown. 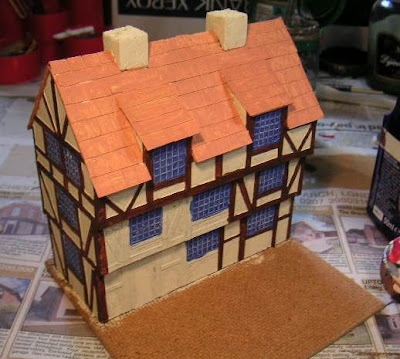 After 30 years the units of the Frunsberg Frei Stadt have seen daylight again. My father found the figures in a remote corner of the attic. 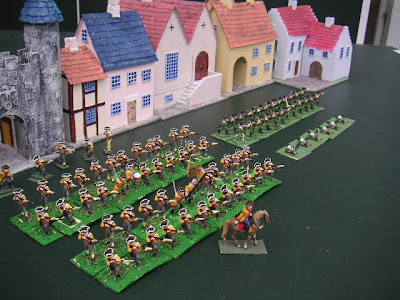 I'm not sure what to do with them, but given the number of other blogs being set up covering various ficticious states I have set up a blog for them where I will post all my memories of their campaigns, etc.

The roofs are now completed and a base coat of paint applied. Two slightly different colour emulsions were used and these will be the colour of the plaster 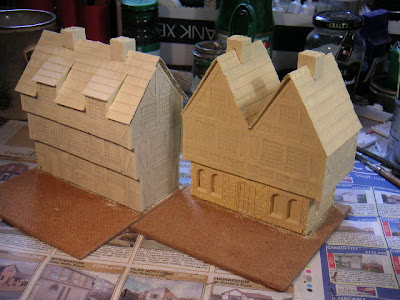 I've been asked how I construct my buildings, so I thought it would be useful to take a couple of pictures of the latest buildings while they are in progress. 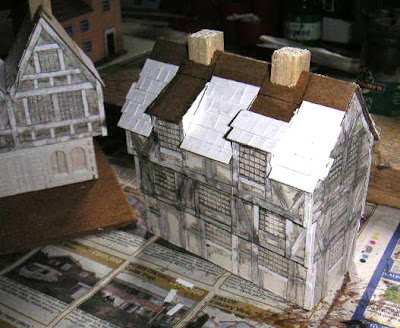 The basic structure for the walls is foamcore, cut to size and rebated at the corners for neatness and avoiding the need to cover the outside surface to hide the inner foam edge. Once the basic structure is completed I add a card roof with tiles cut in strips and overlapped. The chimneys are just balsa cut to size. For the windows and doors I have been quite lazy and just glued them onto the walls. Originally I used some windows left over from some plastic kits, then a plastic embroidery grid and my latest discovery the scrim used by plasterers to cover joins before plastering. These buildings are the first using this technique. 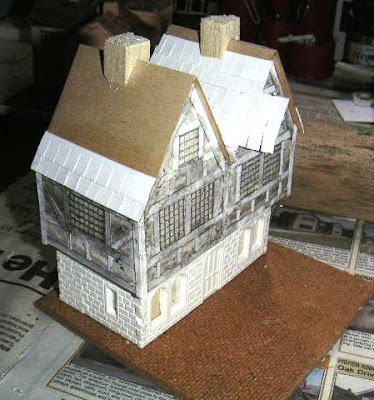 The buildings are also embellished in a number of ways, these are quite extreme as I have glued thin card all over the surface to give a timber framed effect. The base of the second building has been made out of Linka (reinforced with foamcore) to give a different effect.

On the workbench (June)

Not much to report really, having finished the Visigoths I'm in a bit of a painting lull no being sure what to do next. This is partly because Phalanx and Gauntlet are coming up at the end of the month and I will probably stock up on more goodies then. This will include some more Waterloo 1815 Egyptian figures so that I have enough for my Senegalese. Even though this mean I will have far too many General Gordons (8)

In the meantime I have continued work on the two remaining SYW buildings I need and I'll probably do some tidying up work on my Napoleonic Prussians. Then depending on the time left I may construct a couple of North African buildings that I had sketched out a while ago.

15mm Visigoths are done at last

Well at last I have finished the Visigoths. They were originally purchased from Chariot Miniatures as a project for my older daughter who wanted something paid for to do. Given my club used to play a lot of DBM I thought this would kill two birds with one stone. Some chance! At least my daughter assembled most of the figures before getting bored and then going off to university.

So here's the whole army 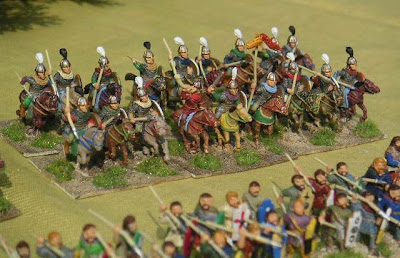 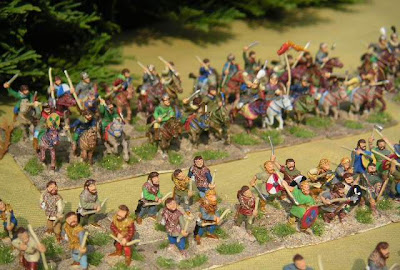 The Archers(Bw) and Warband(Wb), with more archers (Ps) in front 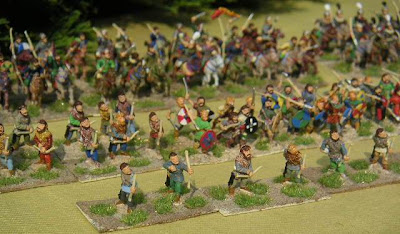 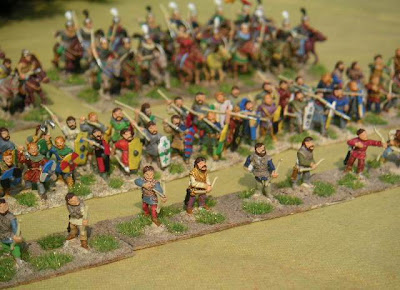 Of course having painted the army I now find it need more figures to round it out so I can use it, so I need to get more warband and cavalry, plus the baggage, which is never included in any army pack.

The good news was that they are not as difficult to paint as I suspected, but new brushes and some reading glasses helped a lot

Death to the enemies of the Republic

I've completed the guillotine and it's "crew" at last. The set comes from Odemars with the figures in soft plastic and La Veuve (the guillotine) is in hard plastic. The guillotine does not come with instructions and I assembled as best I could based on the review on PSR 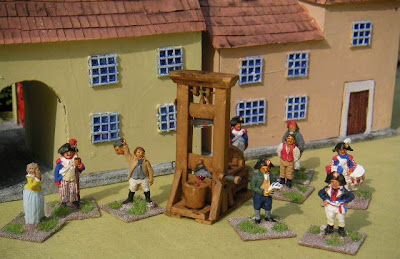 It was very much an impulse purchase, but once I get around to assembling some more figures for the risings in Brittany and the Vendee against the republic it will become the focus of at least one battle. 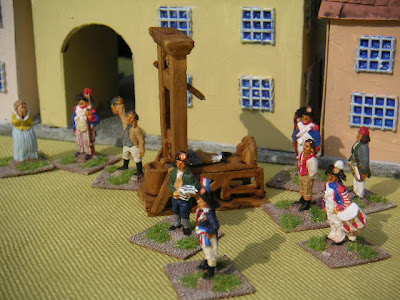