Seems rather too late to be posting this, but i wasn't sure if I would complete some more figures or not. It's not and I'll post the new arrivals for 2010 in the next couple of days.

Well, another reasonably successful year on the painting front, over 1500 items painted a higher level than 2008 and the same level as 2007 and with the extra effort of upgraded basing for everything this year

The breakdown by type is:
By period:

Looking through the list it shows the emphasis on the Crete big game and Gauntlet in the first half of the year (all WW2). Then there was the "final" completion of my Medievals (before I bought more), my French Revolutionary armies and nearly my forces for the WSS/Relief of Vienna. At the end of 2009 the stash is down to 5900 20mm plastic figures, a reduction of nearly 1,000 figures from the end of 2008.

High points of the year were unsurprisingly the Crete and Salerno games, then the trip to Salute to meet up with a lot of old friends and those I have met over the web.

Thanks to everyone who commented on my blog this year and I look forward to hearing from you all in 2010.

Following on from the Bavarians, here are the Hessians.

Again the only thing missing are officer figures, otherwise it's a nice compact force
Posted by Fire at Will at 17:06 6 comments:

Given the sun was out, a rare occurence at the moment I thought I'd have a review of my Bavarian War of Spanish Succession figures.

The only gap needing to be filled is a few generals. I had hoped that there would be a suitable figure in the Zvezda Russian Artillery set, but the box cover was deceptive. I'll have to try and find some suitable figures, perhaps the promised Zvezda GNW Russian Dragoons will have something suitable, but can I wait that long?
Posted by Fire at Will at 16:55 4 comments:

Again to keep the balance I have added three cavalry regiments to match the three existing infantry regiments. This time one dragoon and two cuirassier units.

On the right the first rank of cuirassiers are Wolframsdorf and the second Arco and as before use the Strelets GNW Swedish Reitars On the left is the Arco Dragoons made from the Strelets GNW Russian Dragoons set. This was one of the earlier Strelets sets and the sculpting is not as good as the more recent production, particularly noticeable on the horses and the tricornes.
Posted by Fire at Will at 12:06 1 comment:

Since I had added a Saxon infantry regiment to my Imperial army, I decided to add a matching cavalry regiment as well, this is the Jordan Cuirassiers. Details on the Saxons for the Great Northern War can be found on Dan Schoor's site. 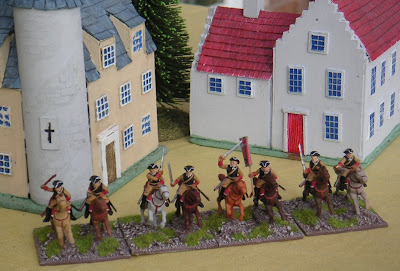 I went for the early pattern uniform, more in keeping with 1683 which had a buff coat rather than the later red coat worn over the buff coat and cuirass. Strictly the cuffs should be the same colour as the buff coat, but it looked a bit too plain so I gave them red cuffs (It's not clear what facing colour Jordan had) as facing colours were introduced sometime before the red coat was introduced. Figures are Strelets GNW Swedish Reitars.
Posted by Fire at Will at 08:22 1 comment:

Well, another spate of cavalry painting has come to an end, so expect a number of updates over the next couple of days.

First off are Hessian Dragoons of the War of Spanish Succession period. There was a choice of Hessian Dragoons, but I had to pick these as they were so in keeping with the style of my mythical Frundsbergers. Although the riders are Strelets Lieb Drabants the horses are a mix of these plus a few left over Russian dragoon horses needed to make up the numbers. 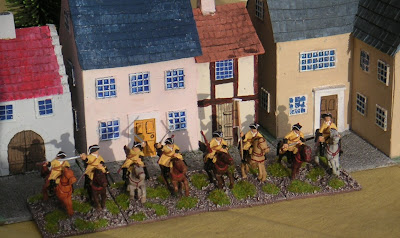 Merry Christmas to everyone.
I've had some interesting presents this year that will certainly get me started in the new year.
I got several boxes of Warlord plastic ECW figures, so one of my projects for 2010 will be the army of the Western Association commanded by who else but Sir William Waller. But before putting brush to figures I'll have to catch up on the period, since it must be 30 years since I last painted any ECW figures. It'll also be a shock painting 28mm figures in bulk.
Otherwise I've got some interesting reading
Posted by Fire at Will at 13:54 2 comments:

As part of the expansion of my WSS/Siege of Vienna armies I produced these to support my existing Hessian infantry and artillery. Due to the lack of other suitable figures I had to use Strelets Lieb-Drabants as the basis. 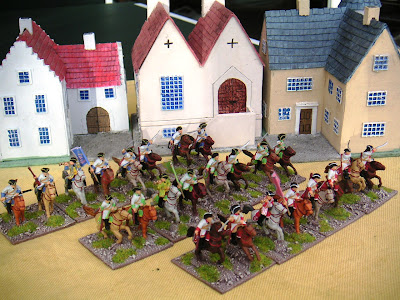 From front to back are the Lieb, Erbach and Spiegel regiments. I also spotted a flaw in the Robert Hall plates as the lion is facing away from the staff which is contrary to normal heraldry/vexillology practice, so I spend a while reversing the images only to realise that the direction is hardly visible on the flags!.
Posted by Fire at Will at 20:46 2 comments:

I decided that I would paint up the command sprue from the Zvezda Russian Noble Cavalry as either a Cossack or Polish Commander. I had bought the set in a hope of more usable figures for Cossacks/Poles. Regretably there were none really suitable. It's a shame that PSR can't keep up with the pace of recent releases, or my desire to purchase them.

Still it's an excellent group, but the exact appearance is more Russian than either Polish or Cossack, especially with the beards., however I'm sure they will appear in these armies at the appropriate time. 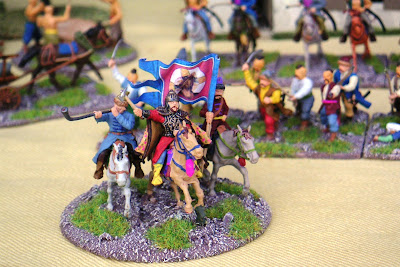 If anyone need extra noble cavalry I'll be putting the figures up on the Trading Department shortly as I try to limit my period creep!
Posted by Fire at Will at 20:15 No comments:

I couldn't resist the new Zvezda Cossacks, even thought I already have a lot of Orion Cossacks and they are not that compatible in height/build. 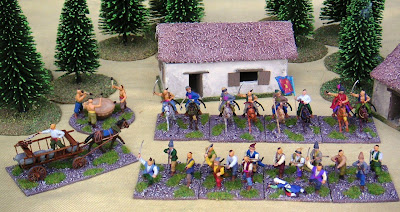 The real reason was the extras that came with the set, firstly a huge drum with three drummers, a real bit of eye-candy to go with the army. 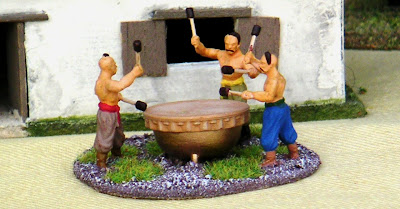 Then there was the wagon, with a light gun mounted on it. I'm not sure how effective it was, but it looks fun. One point to note is that no draught horse is provided in the set, I used a left over Napoleonic one. 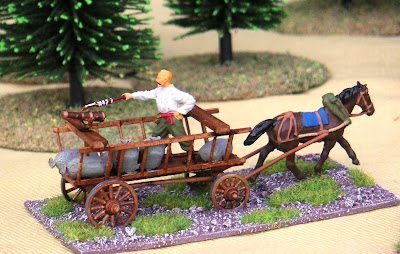 The rest of the pack provided just enough figures for a couple of bases of infantry and a couple of skirmishers. I had to add a dead Janissary to make up for a missing figure. 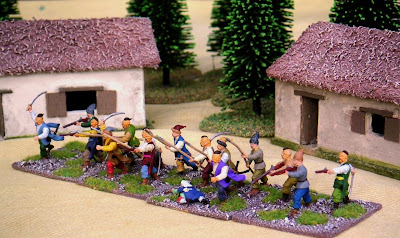 Plus a full unit of cavalry, the lances are a bit over long for my taste, but I decided to leave them rather than cut them down or replace with wire. 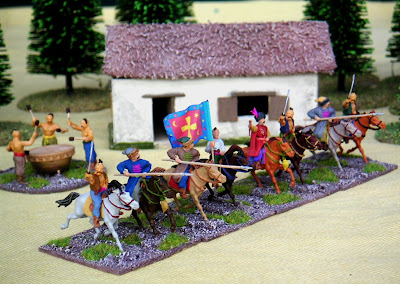 Overall a very good set by Zvezda. Various figures came with separate arms, and I'm not convinced by this approach as on several figures the detail on the chest was indistinct because of the need to create the locating holes. However in a couple of cases I was able to swap the arms around to give a bit more variety to the figures
Posted by Fire at Will at 20:05 2 comments:

I had debated the purchase of these Waterloo sets given the high prices, but when I saw them at Harfields at a substantially lower price I had to buy them. Regrettably they have increased in price since.

First off is the cannone da 149/40 modello 35 an upgrade of a similar same gun used in WW1 and still in use in WW2. These were nice crisp figures and generally well moulded, the only poor one was the figure with the megaphone. 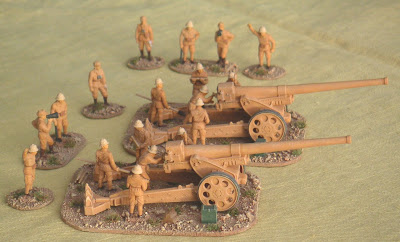 Second is the Italian Support group, a very useful set of figures, but there was quite a bit of flash on the figures and it wasn't that easy to remove it all. The inclusion of an MMG, Brixia mortar, etc. made it very useful. I'm not sure if the bicycles ever made it to North Africa but I'll certainly use them for Sicily. I felt the presence of only two sprues in the box was a bit of a fiddle and certainly if I had paid full price 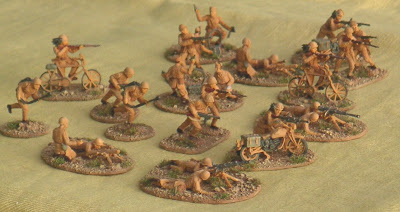 There was certainly a surfeit of teddy bear games at the Recon show in Leeds yesterday. One was a land of counterpane-like game with colonial British bears against Zulu pandas and the other was a western gunfight. Overall the show was very much as last year, small and friendly. I was upstairs with the Lance & Longbow fighting with medieval cogs (ships). The Zvezda Hansa cogs certainly impressed a number of visitors. Rules were a simple set called Might and main published by the society.
The bring and buy had plenty of bargains, but the only thing that caught my eye was a couple of packs of the Revell SYW Austrian Artillery, which I particularly need for the limbers. Downstairs apart from the traders there was a massive Very British Civil war game.
I didn't take my camera, but there are some pictures here and the VBCW game here. I was tempted by a number of books, especially the reprints of old wargaming classics but didn't succumb.
Personally, I sold quite a bit of stuff so I returned home with more cash than I started, sorry Traders.
Posted by Fire at Will at 07:33 4 comments:

Virtually all newly painted except the cavalry and the dogs. This covers everything I'm allowed, except the lists do give me the option of one extra gun.

However I'll wait and see if it is worth converting another. Close up of the centre 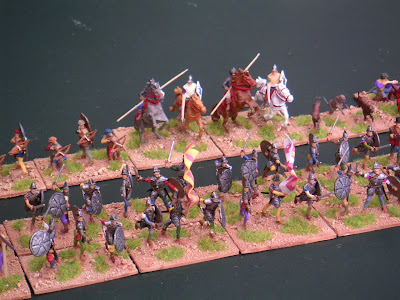 All the figures come from the old Revell conquistadores set and the gun is a cut down Revell TYW gun carriage with an Airfix Napoleonic French gun barrel. 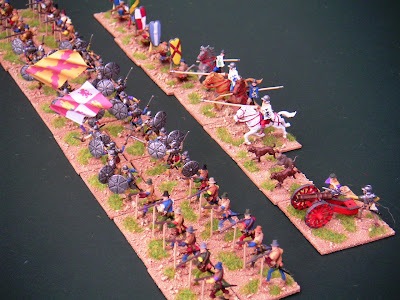 Still suffering with the poor light and putting the figures on the table tennis table doesn't help.
All being well they will see action tomorrow evening.
I see the New World DBA site has been reorganised
Posted by Fire at Will at 16:39 1 comment:

Well another year is almost over, it seems that time has flown since last Xmas, perhaps it's because of my age!! Anyway I've still got 8% of the year left and that means more painting.

Very much back on track with a definite plan for this month, but I'll see how much I achieve with family and friends visiting at various times during the month.