All my painting is progressing OK, but it feels strange painting the Airfix AWI figures, it must be over 20 years since I last painted some Americans, but it seemed like it was only weeks ago as my memory just switched on with minimal checking of how the figures "should be painted". By that I mean identifying where the dividing line exists between facings, cross belts and coat. My first brigade, a combination of Williams and Hugers brigades from the war in the south is progressing quickly. I'm still debating basing, whether to change over to my new style or whether to flock them like the rest of my AWI collection.

If you like eye candy, here's a link to the Earlswood wargamers battle of Germantown.

On the workbench July/August 2008

Caught me a bit unawares!, I finished everything ahead of target, quite unusual. For the next month I'm still debating, so this entry will probably be updated again within the next few days. My current plans/ideas are

Well the cars continued in service right up the the early years of the war, including the battles in the Western Desert, their armament was changed to a Boyes AT Rifle, Bren and 2" smoke mortar in an open topped turret. 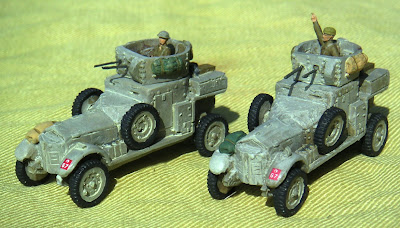 Makes a nice change from the heavy armour late war

The early version of the Rolls Royce armoured cars from Frontline have been completed as used by the RNAS (Royal Navy Air Service). They operated in quite a number of theatres including the Caucasus, so mine will be used as part of by British trans-Caspian forces during the Russian Civil War. 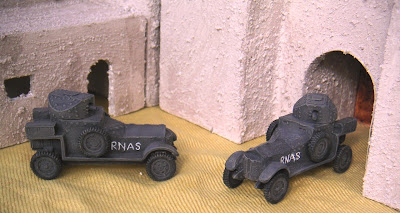 They are nice vehicles and I'm now tempted to get an extra one to support by Arabs against the Turks as used by Lawrence of Arabia.

The fortress is now finished. As you can see from the pictures it's built as a set of modules that can be combined in different ways to provide a variety of forts. 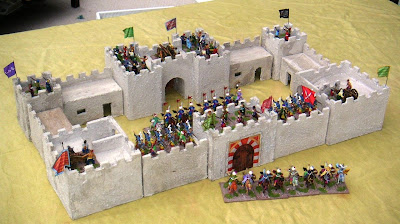 Overall there are two gateways (one large and one small), six wall sections, two small towers and two artillery towers 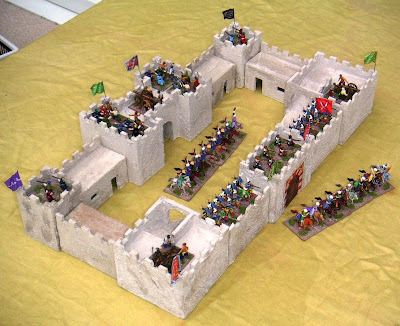 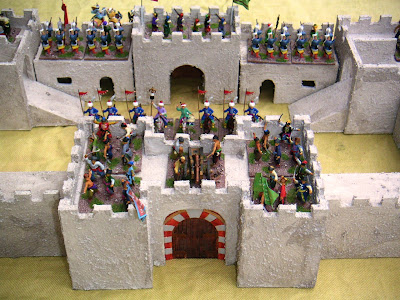 above & below, the large gateway 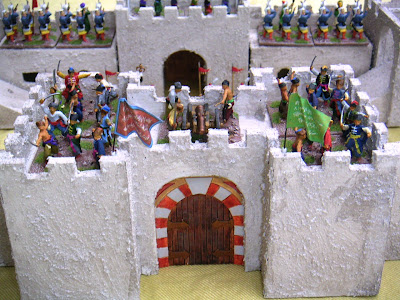 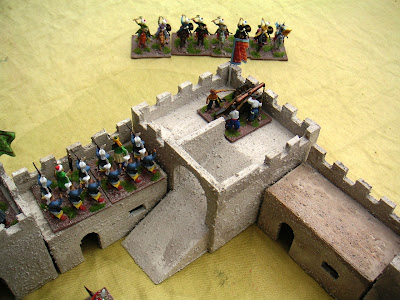 I'll probably have to add some more sections as needed for particular games.

The textured finish is a very old pot of artex paint, still going strong after more then 20 years, everytime I open it I expect to find it hard, but it's always still usable. It is white but I gave the whole surface a quick brown/black ink wash to tone it all down.

I've started work on a scenario of this battle using my rules, see my AWI blog for details. One consequence of this is (as always) I need some more continentals. I had already planned to painted some Maryland line for use in the south, so I think I'll paint Ebenezer Learned's brigade in addition. Luckily I still have plenty of Airfix AWI figures still in my stash.

OK, finished all the Zvesda Turkish cavalry and another fine bunch. These are pretty flexible and will cetainly be used across the full range from the Rennaissance to fighting the French in Egypt. 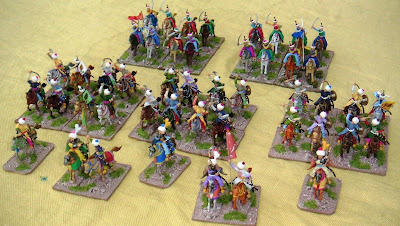 I the front the various commanders (Agas), then three units of what I will probably use as Feudal Sipahis, behind are a couple of units of Napoleonic mamelukes that I've rebased. My only regret is that I would have liked a bit more variety, but that's a minor grumble. 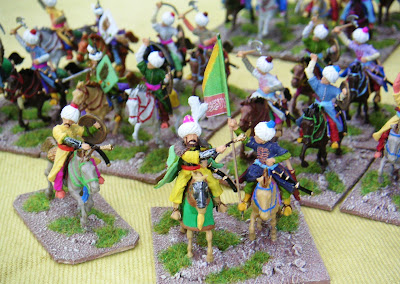 Closeup of one of the Agas with their barded horse. I also modified one of the ordinary cavalrymen into a commander by just swapping his sword arm for a mace.
Will
Posted by Fire at Will at 10:31 1 comment:

Yes, as is typically the case, the regulars are finished first, in this case more Austrians for 1798 in Italy, to face my French when they return from Egypt. The figures are the newer Italeri version on the original Austrians from Esci, most now have backpacks and they've added some Grenadiers. There was enough for 2 battalions of line (2x12) and one of Hungarian grenadiers. The the left over fusiliers were used for a Hungarian light battalion. Finally a there was a mounted figure to provide a brigade commander. 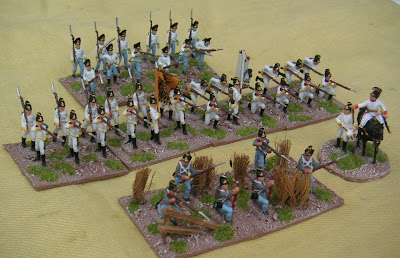 Well, from a personal perspective the SOTCW game at Gauntlet was great fun. My Andreivian Turks had a very successful couple of days.

Day 1 we successfully blocked the American advance down the valley, the Mujaheddin died to the last man blocking the US advance through the choke point of the first village. meanwhile the rest of my forces laid a minefield (which turned out to be ineffective given the mine plough on the US Abrams) and bided their time

Day 2 the US rapidly used its superior weaponry to massacre the local citizens who mustered to the defence of their homeland. Notably all my men died for the cause. In doing so, the US lost their lead Bradley blocking the bridge. Also the devil's incarnation a PyOps Humvee was turned into a Pyre by my militia.

Reinforcement then arrived, a squad of local farmers, as the dice revealed all deadly shots. They did have problems attaching a command wire to a previously positioned IED and died as they sprinted back to cover in a hail of bullets from proclaimed Spanish peacekeepers.

Meanwhile Armenian separatists tried to distract us from our vital mission. They were slaughtered in a hail of fire and retired into Tuzhar. Their other squad tried to flank us through the woods in the rain, but Allah blessed the dice yet again and the unbelievers fell like corn being harvested.

Allah continued to smile on us when the thrice-cursed Abrams drove up the road towards Tuzhar and our simple but effective explosive device ripped the machine to pieces. 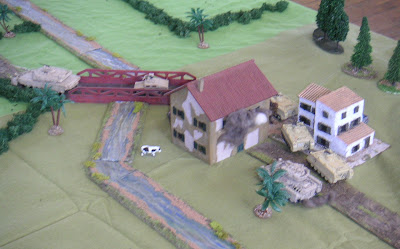 The US push through the village and start clearing the freshly laid minefield on the other side of the bridge with the Abrams mine plough. It is followed by a Bradly (not visible) three M113 (empty of troops) and another limping Bradley. The big house is still smoking from the number of 120mm rounds pumped into it. 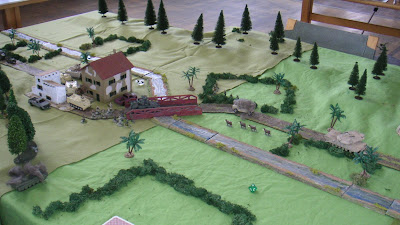 The scene about two moves later when my BMP shot up the Bradley from the rear blocking the bridge and my militia took out the PyOps vehicle. Retribution was swift with the Abrams drilling a neat hole right through the BMP 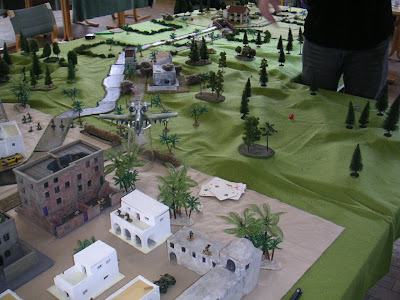 A10 completing its bombing run on the second village, the US were taking no chances now, the massacre of innocent civilians was justified on the grounds that more of my forces could be hiding there, but really it was because they were worried about friendly fire if they attacked my visible forces 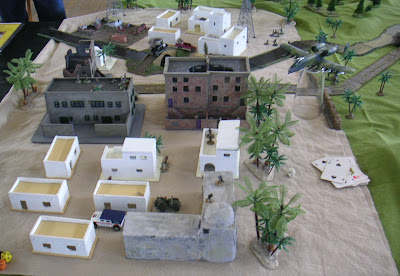 The A10 passing over Tuzhar, it all looks quiet as the government, turkish and armenian factions had fought themselves to a standstill and were awaiting reinforcements 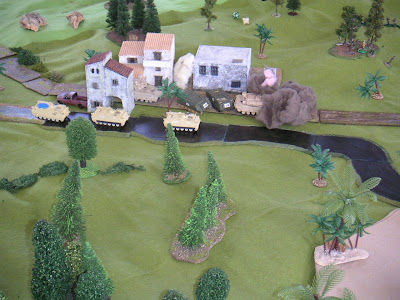 The death of the Abrams, two Spanish M113s in the village, followed by the limping Bradley, meanwhile the empty US M113's try to bypass the problem down the river.

The rules were Arc of Fire, a set I don't possess, but we quickly got used to them after the first couple of moves and then the game flowed reasonably well, with just the occasional reference to the rules rather than our individual unit playsheets.

Back in December I set myself some objectives for the year, so how am I doing?


Painting, seemed quite a slow 6 months

It was the last item that surprised me as I hadn't realised how much WW2 stuff I had done, and I've still got more to do.

Another busy month with Gauntlet in a weeks time. But it's back to the paintbrush, etc.

This weekend is our local club show with the emphasis on gaming.

If you are in the area please pop in, you can always leave your partner in the nearby shopping park.