Just completed all the buildings needed for the Tifaruin game

A couple of views of Afrau 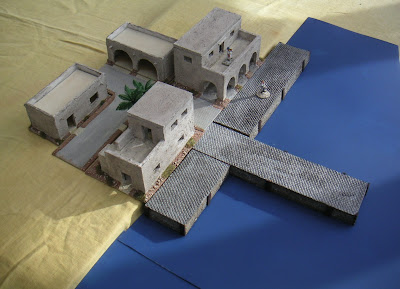 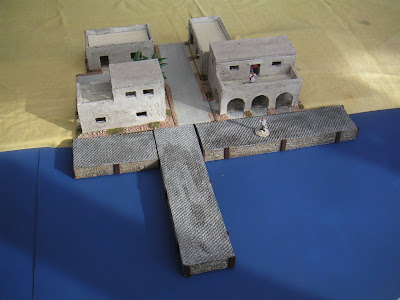 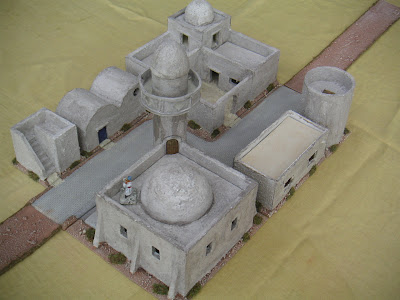 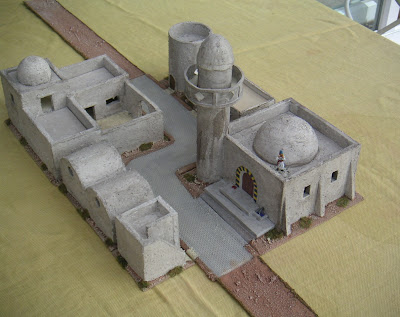 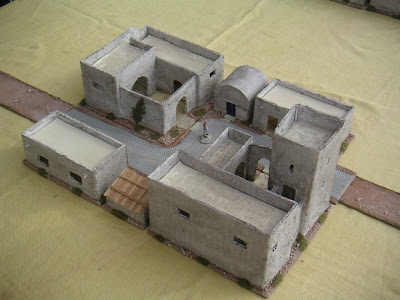 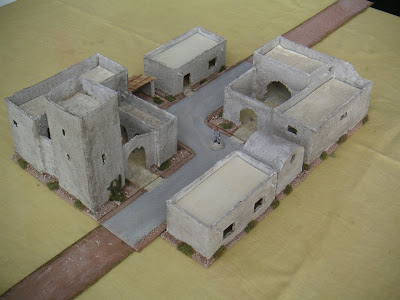 A quick update on my progress for "Tifaruin 1923" the SOTCW game at Gauntlet.

Here is the set up for the various towns. Afrau at the front (on the coast) Tifaruin on the right with the mosque and Sidi Messaud on the left.

Along with the mosque there are a number of other new buildings, plus quite a few old oneswhich I am tarting up ready for the game.
Posted by Fire at Will at 11:12 No comments:

Only one week to Gauntlet

Only one week to our local show "Gauntlet" further details can be found on the club website.
Hopefully I'll have everything ready for the SOTCW game finished by then.
Posted by Fire at Will at 10:27 No comments:

The long and winding road

Not quite, but since the big game the focus has been on preparation for the SOTCW game at Gauntlet. For last years game I created a road for the Chuinzi pass, and I had intended to create more if I had time, now a year has past and at last I have completed the rest of the roads. 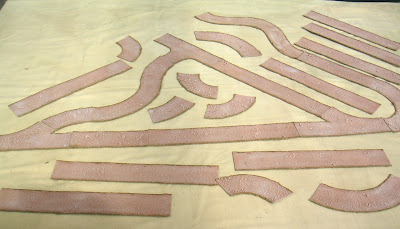 The basis is some left over rubber roofing from when my garage roof was repaired. It was cut to size and then covered with brown acrylic sealant with builders sand sprinkled on top. It was then painted up in suitable dusty colours and some scatter glued along the edges. The one problem I had was that the weather was a lot hotter than this time last year so the sealant had almost set before I added the sand so it brushed off. Therefore I had to add another layer of sealant on most pieces and rather than complete spreading all the sealant I added the sand after each piece.
Posted by Fire at Will at 12:59 2 comments:

Back from the Big Game

Just back from the big game, this year it was covering the action on the British beaches on D-Day.

I've uploaded the pictures on flickr
Posted by Fire at Will at 13:34 No comments:

Now complete with a nice selection of Kriegsmarine crew from the Revell German Navy set obtained in a trade. Thanks Ken. 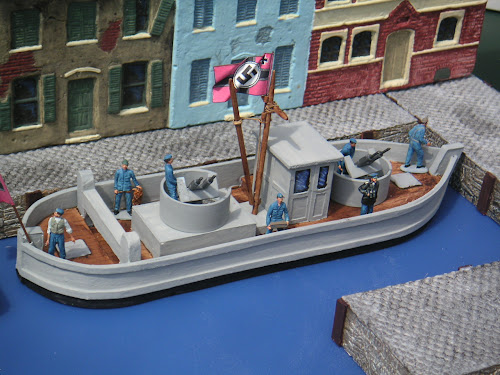 It's moored up against my new wharves that I have created for the forthcoming Tifaruin game.
Posted by Fire at Will at 13:02 1 comment:

Another oddment that has been lurking on the painting table for a while. A BefehlsPanzer I, the command version of the Panzer I. 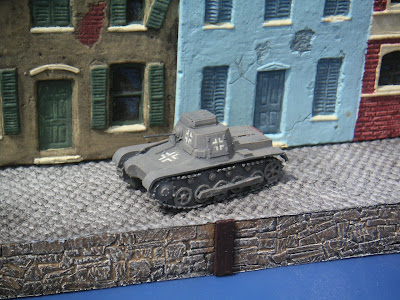 Model by Frontline, this means by early war German panzer battalion is now completed.
Posted by Fire at Will at 12:59 No comments:

Here is the last major part of my German defenders for the big game. Unfortunately I'm waiting for the Revell German Navy figures to arrive so I can add a crew.

Construction is dominantly foamcore plus card, the only extras are the gun mountings that came from an Airfix coastal defence set. The flags and guns are removable so I can easily change it into another vessel if needed.

Now for a shift in scale to 28mm, quite a major change for me. These have been lurking around the back on my painting table for quite a while while I tried to find details of Sir William Waller's early ECW army, that of the Western Association. Since little was around I've gone for a generic colour scheme, the only item marking out the units as Waller's Horse is the standard, which is the same as that used by the same unit in the Sealed Knot. 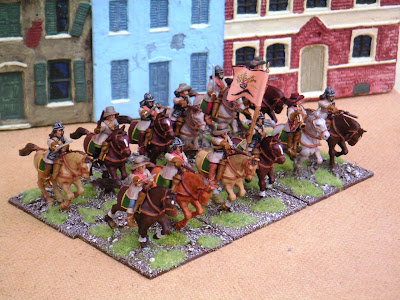 With 28mm I normally try to add some variation in tone to the large areas of plain colour, but instead I opted for using the GW wash and it worked OK on these. Figures are Warlord plastics.
Posted by Fire at Will at 16:43 10 comments:

Having created my WSS casualty markers over a month ago (link) for use with Black Powder, etc. I got to use them down the club last night. They really worked well, the only downside was that I hadn't created enough so I had to use some dice as extra markers, this then resulted in the classic mistake of collecting these up with the hit dice. Therefore either have enough markers or use dice of a different colour. Of course I'm now also thinking of adding extra markers for shaken and disorder.
Posted by Fire at Will at 13:04 No comments:

German armour for the big game

As part of the immediate counter attack forces (which are being provided by someone else) there were a couple of Marder Is. I had acquired a couple at Crewe so this was all the excuse I needed to prepare them, just in case. The Alby kit is a nice crisp casting with lots of fine detail, the only slight downsides were that one of the gun shields was broken and that I needed to provide the main armament, in this case Pak 40s. In the background are a couple of Milicast vehicles I completed at the same time as the camouflage would be the same. On the left a Sturmpanzer IV or Stupa (not a Brummbaer as this was only used by allied intelligence) and on the right a Hummel. The latter will replace a very old Vacucast Airfix conversion and an oversized Brittania version I acquired previously as a possible replacement. 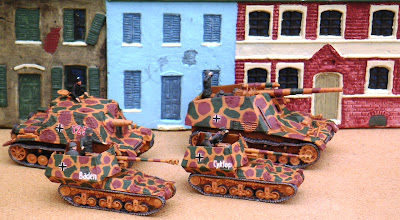 The camouflage scheme is the same as I have used on almost all my late war German vehicles, but instead of my usual wash I tried one of the new washes from GW to see the effect. I used the Ogryn flesh and as a wash it is fine, but on armour it too clean, I'll either have to add a bit of black ink, or try something else.
Posted by Fire at Will at 14:59 2 comments:

Germans completed for the big game

OK so with the along with the medics I painted/reworked all the other figures needed for my Sword beach defenders. 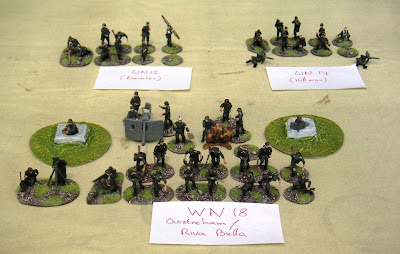 The figures in the tobruks will be used but in the actual defences rather than my tobruks. Rather than add Panzerfausts to the figures I have used the SHQ panzerfausts to make markers so I can remove them once used. 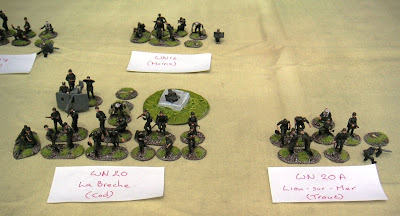 Two Festung Paks and a 155mm gun need to be added, but they will be provided by someone else.
Posted by Fire at Will at 12:56 9 comments:

One of the items I will need for the big game is a medic for each of the Widerstandsnest (WN) so not having any yet I created these six for various odd figures in my stash. two are from the Armourfast MG teams and I gave them a tabards as they were wearing smocks. The two running were from the Pegasus mortar set, so again just a simple paint job. The other was a Revell German pioneer given a stretcher and finally an old Esci figure with weapons cut off and a medical box added.