Well I got bored of all the white with the Teutonic knights and decided to do something different. I found in the last few games of Fire and Fury that I was short of artillery, so I picked up some second hand Airfix, some were already painted so they were given a spray of oven cleaner to remove the paint. Although all my ACW figures are based with green scatter, I decided to continue with upgrading the basing for these.

The artillery colour should be olive green, but I've continued with the same grey that I've used since the beginnings of my ACW collection, I can't remember how I came to use the colour.

Hopefully within the next week the Teutonic knights will be completed.

The 75mm leichtes Infanteriegeschütz 18 is a lovely little model from Pegasus, I was a bit worried at first with the small size of the parts, but they all fitted well and turned out a good model, in this case the early version with the spoked wheels. The crew were not as easy as they were in soft plastic and it wasn't easy to work out which arms went with which body as the codes on the sprue were too faint. 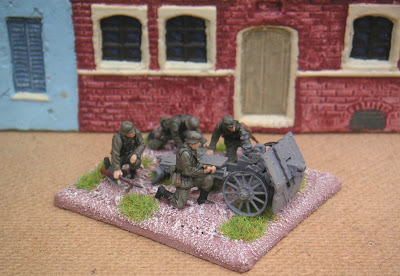 At another extreme was the IBG Bedford QLR, it was a very detailed kit (over-detailed), but the instruction sheet was useless and it was far from clear where parts went and unlike most kits no locating pins/lugs to ensure correct location. Now completed it looks fine, but I'm not going to get another kit from this maker unless desperate. As a radio truck I'll either use it with my HQ or as a part of a multi-battery artillery regiment (Rapid Fire allows multiple batteries to fire at the same target if the unit has a radio truck) 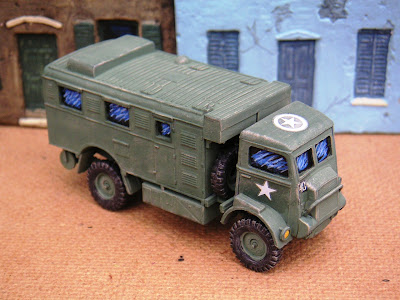 The Teutonic knights are now underway.

I went into Manchester yesterday to help on the Lance & Longbow stand at Britcon 2008. Once again it was Marignano 1515, but the rules were tweaked somewhat and this time the Swiss did mange to cross the ditches and take the guns before being driven back. 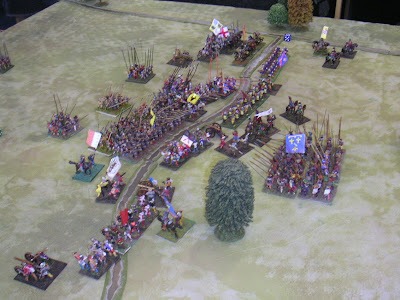 I didn't buy much as it's not really a traders event, however I did pick up a book on the actions in the Dodecanese in 1943, which is a period I've often thought of wargaming. The book is Churchill's Folly: Leros and the Aegean by Anthony Rogers and seems to have plenty of the necessary detail to create some scenarios.

There were quite a number of nice looking armies being used and I was stuck by one of the prizes for the FOG competition, which used figures on coloured bases to indicate unit status. Certainly more appealing than tiddlywinks that I use. 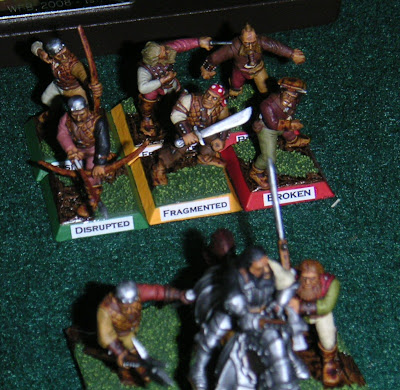 If you pop across to my AWI blog you'll find pictures of all my AWI forces on parade.

Now for my brigade to be used at Bemis Heights. I mentioned that I would depict the brigade of Ebenezer Learned comprising the 2/8/9 Massachusetts and 1st Canadian.

Clockwise starting from from the left

2nd Mass - as described in Lefferts, etc very much standard uniform except for Brown breeches
8th Mass - I used the picture in Mollo (#105) as the basis. I agree with comments that it may have been just one company, but it makes a very striking unit
9th Mass - No clear description, so I depicted another Mass regiment Glovers Marbleheads (14th Cont.), which looks very similar to the unit attacking the Breymann redoubt in the Osprey Saratoga book
2nd Canadian - rather than the 1st this unit saw more action, more clarity on the uniform so I copped out.

Flags - All generic Massachusetts flags, except the 2nd Canadian which came from Warflag

I also added a couple of extra generals by converting some Revell American Militia, one is clearly formally dressed, except he is missing his hat, and the other I will use with one of my militia brigades.

Finally, here is the very useful response from Brendan Morrisey on the Lace Wars group when I queried the 1st Canadian Uniform.

"The situation with much of the Northern Army in the summer of 1777 was that very few units were issued uniforms of any sort prior to the Saratoga campaign, most only receiving their 1777 issue clothing in November and December. So the short answer to your question is that you could probably use a militia unit with a few uniformed officers for Livingston's regiment.

To take the regiments of Learned's brigade:

2nd Mass. Several deserters were recorded wearing blue coats/short jackets, so there may have been a uniform of sorts, possibly worn by men who had re-enlisted from 1776 and were wearing old uniforms from other units. The first recorded issue of clothing to the regiment itself, was in December 1777 and included a large amount of green and red cloth (suggesting green-faced-red).

8th Mass. This unit was issued with 60 coats and similar numbers of waistcoats and breeches, but also 238 hunting shirts, some time between February and August (they were very much the exception). In the early years of the war, h/shirts were issued in pairs (ie each recruit got two), but more likely the 8th were given one each because of shortages

9th Mass. They got exactly 18 sets of coat/waistcoat/breeches,which I would suspect were issued to the sergeants. The rest of the unit would have been wearing "civvies" - ie, they'd look like militia.

1st Can. Because the Canadian regiments had no "home" State, they were often overlooked when it came to clothing and equipment (IIRC,Hazen had to bang the table a few times to get Congress to kit out his own regiment, the 2nd) and I suspect a lot of them were wearing their own clothes. From the assorted deserter reports listed in an earlier post, it sounds like the two men wearing the captured British coat and the blue coat faced red, were in the the "official" uniform( probably one was a musician and hence was in reversed colours - my money's on the guy in the British coat). The other two men were probably wearing their own clothes, and therefore may have been new recruits. A consignment of British coats was "liberated" from the7th and 8th Foot (dark blue facings) and 26th Foot (yellow) during the invasion of Canada in 17775-76, and the deserter above could well have been wearing one of these - quite likely a 7th/8th Foot coat.(Before his death, Montgomery had a spat with Congress over British coats, as the latter wanted him to take away all prisoners' coats and he had to explain that only un-issued coats could be taken as spoils of war, as the British soldiers paid for their uniform, so the coats they were wearing were private property and so could not be confiscated.)

Just completed some new figures to use in my Southern battles of the AWI. It's a combined brigade comprising Huger's (1st & 2nd Maryland) and William's (4th & 5th Virginia) brigades. Like all my continental regulars I depict them in a common uniform, which is not correct, but it's the way I started in the period over 30 years ago and it makes it easy to identify the units. The flags came from two sources Warflag for the 1st MD, and Dansk Figurspilsforenings (see downloads) for the 2nd MD and Virgina flags. The latter were adapted slightly using MS paint to give different background colours. 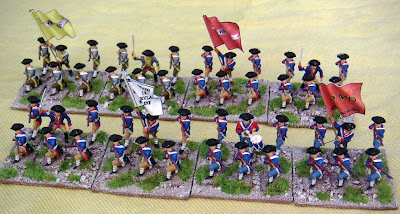 The Maryland regiments (front rank) are very much as documented, but there is much less on the Virginia regiments (rear rank), so I depicted the 4th in the standard continental uniform for Virginia and the other I used artistic license and copied the uniform used in Tarltons Quarter for the 10th Virginia (link)
As my basing seemed quite varied (link) I decided to kepp to my current style although it's more effort.
Will
Posted by Fire at Will at 21:30 3 comments:

Some German & US WW2 equipment

Well, a complete change from the Turkish cavalry, some WW2 equipment again, "because I need it to make up units for various games/units"

So what is there?