I always forget just how much effort putting on a game at a show needs. You start off with, "I've got the figures..." Then you think I just need a bit more terrain. Then, it's a participation game .. Player aids, etc. Then handouts.
The basic idea was to us Steve Thomas' DBA in the New World rules, Normally I use the 90 point version, but for the game I used 2 x 75pt armies and experience last week at the Deeside club helped to clarify the armies used. The Aztec armies were identical, but the Conquistadores were either a fire-power or blade dominated force. Both were balanced with Indian Auxilliaries. A pure Conquistadore force on 75 points is too powerful for inexperienced Aztec players to cope with so allies were part of both forces.
A bit of a blurred picture, but it shows the terrain set up used. I had originally planned to amke some more impressive Built Up Areas (BUAs) for the Aztecs, but DBA rules meant it was simpler to show an area and just add a building. 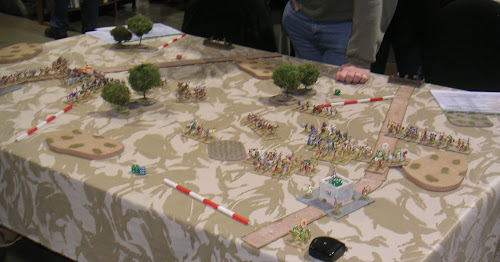 The "classic" Spanish strategy with the blade heavy army - Indian Allies kept out of harm's way while the Blades and General hack their way though the Aztec, knights, etc.
. 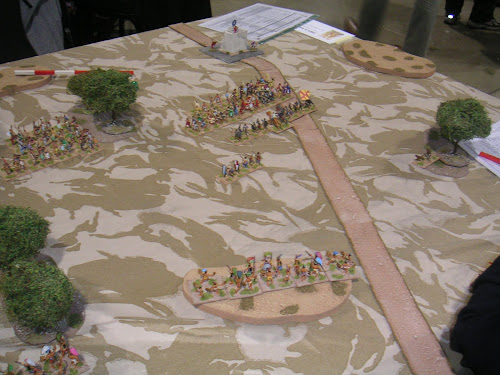 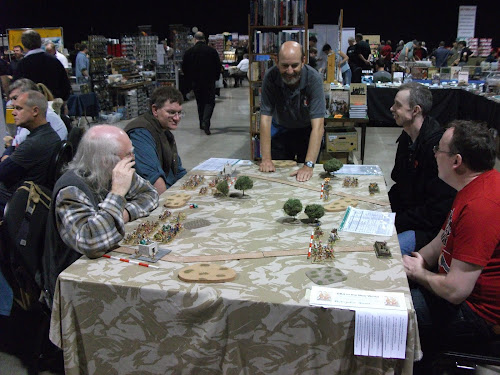 Overall performance Spanish win 6-4, however Hernan Cortes died twice, so you can rewite history however you wish.
Overall a great day out, though my voice was fading by the end. The problem was I had no time to visit the other games and the only shopping was just before we started. I was particularly glad to see that my mate's old Atlantic figures sold along with a fair bit of my plastic surplus.
Just before we started I managed to acquire:
Posted by Fire at Will at 19:27 1 comment:

Run a number of DBA in the New World test games last night at the club, and I've only got a few final bits to sort before the game is ready for Fiasco. Although I normally play a 90 point game my play is to run a 75 point game at the show because it is quicker to run and also allows me to run a paired game if more people wish to play.

Link to Steve Thomas's Blalgan site where the rules, etc can be found (link) just look under Wargaming then DBx.

The painting front has been a bit slow getting started after the holiday, but the Battenburg regiment is well underway and may be finished in the next day or two. It'll then be the end of the month so I'll have to reappraise what to do next. I suspect this might be affected by what I buy at the show.
Posted by Fire at Will at 13:05 2 comments:

Just back from my long deserved holiday to Rhodes. Rhodes city is really impressive and the walls around the old town are an excellent example of early gunpowder fortifications.. 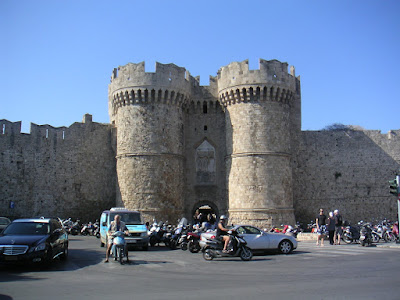 At the end of the mole between Mandraki and Commercial harbours is Fort Saint Nicolas, built in 1460 and the major focus of attention during the first Turkish seige of 1480. 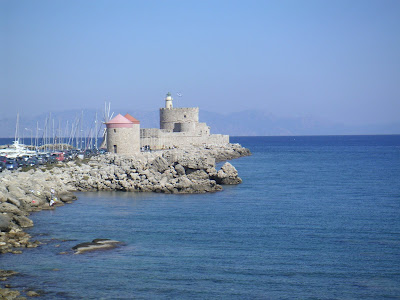 A walk around the moat sounds rather boring but isn't and give a real feel of the scale of the fortifications and their complexity with a succession of killing grounds for anyone getting this far. 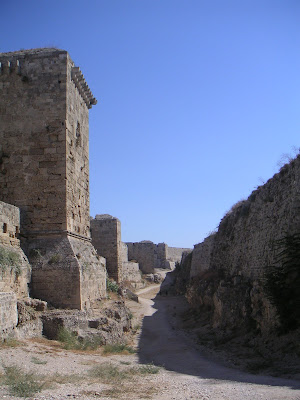 For some strange reason you only get to walk on the walls themselves on Tuesdays and Saturdays so a second visit was need to see the view from the top. This shows the old wall (1480 siege) to the left, a new moat was cut to the right leaving a new advanced wall ready for the 1522 siege. 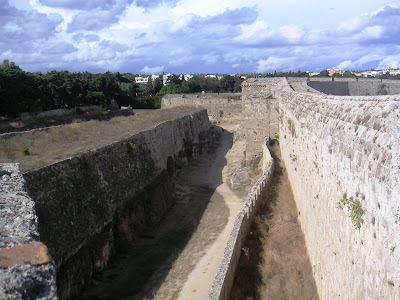 Finally the Grand Masters palace, the curse of scaffolding seems to follow me around. From the ground floor up it was reconstructed by the Italians in the 1930's 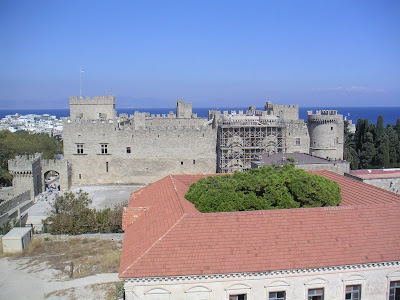 Sorry for there being a lack of new painting being posted recently. The reason why? I painted the whole lot of 96 SYW Frundsberg Infantry as a single batch and here they are:

They are part of my preparation for a forthcoming campaign set in my imagi-nation the Frundsberg Frei Stadt and further details on the units will be posted on that blog over the next few days (link)
Posted by Fire at Will at 12:06 7 comments:

Good day out on Saturday, although there were several display games none fired my imagination enough to bother taking some pictures, so if you want to see some Eye candy have a look at John's blog 28mm Heaven. Day seemed quieter than usual, and takings must have been down, perhaps it was the weather. My spot on the Lance & Longbow stand seemed to be pleasantly cool compared to some parts of the building. Didn't sell much, and there were no bargain plastic figures on the B&B.
Bought quite a bit
Posted by Fire at Will at 17:28 3 comments: