Having already mentioned that I had acquired two each of the Hat Colonial guns here is the last of the set, The Naval Gardiner guns. Rather than put them on their field mountings (as I already Have a Jacklex model) I went for the ship mounted version.

So here is a Naval landing party being landed from a very small gunboat! 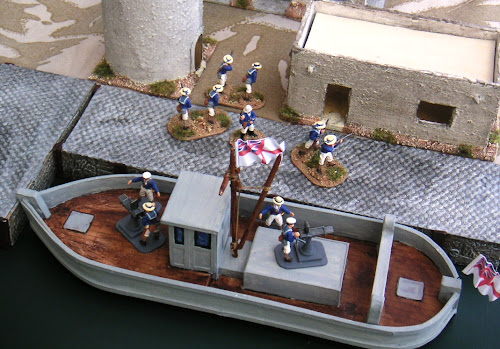 If the gunboat seems familiar see here and here
Posted by Fire at Will at 16:03 4 comments:

Yesterday's excusion to Meols saw me in command of a platoon of Spetznaz tasked with capturing the airport at Tcherbevan from the local Andreivian forces under cover of darkness. Ordering my two section commanders to provide covering fire I sped down the runway in my BMD heading for the radar station and SAM missile site, as I neared the SAM Corporal Ianavitch opened up with his AGS-17 grenade launcher and luckily distroying it. This of course resulted in my squad being iluminated by the burning propellant for the rest of the game. I managed to drive the Andreivian airport security forces out of the radar station and Corporal Connaloffski captured the Control Tower. However we were then pinned down and our BMDs eliminated by an Andreivian relief force supported by a T62. 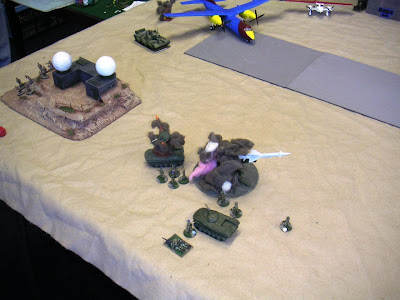 More details can be found over on the Andrevian Tales blog

Off to Meols in the morning!

For those who are not aware there is a Help for Heroes event being held at St John's Church in Meols, Wirral, Merseyside, CH47 0LF tomorrow (Saturday 27th November). It's an Andrevia game titled "Spetsnaz At Tcherbevan" being organised by Richard Crawley of the SOTCW, so if you are anywhere in the area please drop in and show your support. It'll be great to see you.

Another collection of HaT Colonials, this time their Highlanders painted as the 92nd foot. These were started at the same time as the Indians, but painting the tartan significantly increased the time taken.

The groundwork is something of an experiment as during a clear out I found some old wallpaper that looked usable. It normally looks brownish, but in the harsh morning light it is almost white, so it will certainly be painted.
Posted by Fire at Will at 15:13 1 comment:

Back to fight the Zulus

Having obtained two of each of the HaT colonial gun sets it was obvious that as well as one for the later colonial period I would depict the earlier version, particularly for the Zulu war period, to provide more gaming options. The smoothbore is simply Royal Artillery, but the Gatling and heliograph are depicted as part of my "North Mendip Regiment" 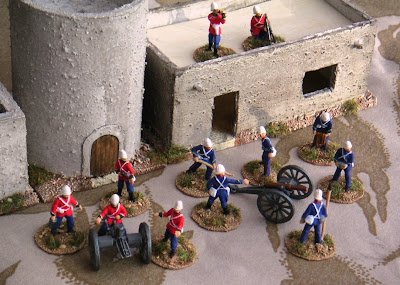 My Zulu rules are over on the Free Wargames Rules site (link)
Posted by Fire at Will at 22:08 No comments:

Well Warboot was a tale of two halves. On the negative I sold very little of my stuff because of the regular curse of Warboot, not enough buyers. On the positive I bought two Airfix Bren carriers, another German recon set, a pair of Stugs, a Matchbox 251/1 and a SM79.

Then nearing the close of business I picked up over 50 painted vehicles (below) at a very good price, I now need to decide what to do with them all! some I'll add to my 1/76 collection and the rest I'll sell/trade to cover my petrol and table costs. 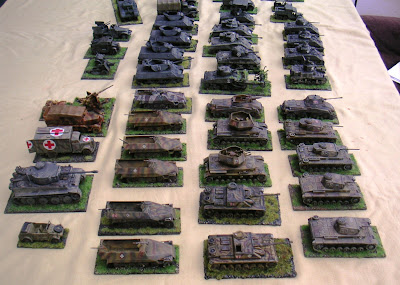 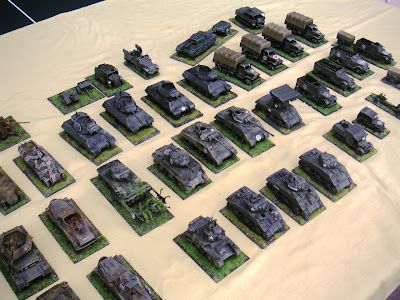 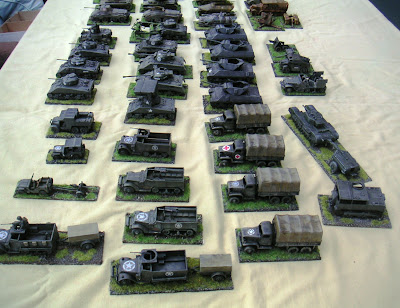 It was also nice to meet up with a lot of friendly faces, and regret taking sandwiches when the smell of cooking bacon wafted through the room.
Posted by Fire at Will at 17:05 3 comments:

Having brought one set of all the figures boxes I couldn't resist having a good look and assembling them.

Each infantry box has 2 sprues each of 5 infantrymen in three poses, plus a large multi base and five small bases. The bases are quite chunky so I won't be using them. The figures are quite nicely sculpted and will certainly add some variety to my forces.

The MG sets were really what I was after. The German is an excellent representation of a low tripod mounted MG34, but the rear legs of the tripod is quite difficult to fit, but the overall effect is excellent, the only downside is that the No2 has binoculars rather than ammo belts. The Russian Maxim set much easier and the downside here is that the wheels are solid rather than spoked.

Some more details are on the Zvezda Art of Tactic site
Posted by Fire at Will at 15:53 7 comments:

Royal Artillery - a Smoothbore gun and Gatling backed up by a heliograph team, all figures by Hat 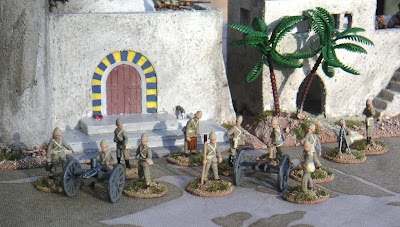 After many years of dithering I finally made my way to the big IMPS show at Telford. Conclusions:

Overall a good day out, but, not enough to tempt me again for quite a few years. Acquisitions were quite few.

For another view and some pictures see Dampf's modelling page 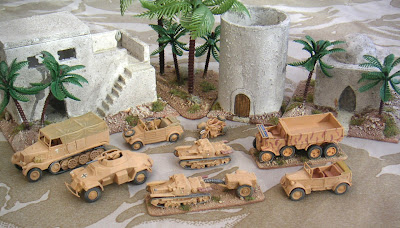 In the front a CV33 flamethrower from an unknown manufacturer (not Skytrex) followed by an Alby Fiat 508c Militaire. Second row an Airfix sdkfz 222, another CV33, and a Cromwell Fiat Dovenque. At the back a Matchbox sdkfz 11, Airfix kubelwagen and a matchbox BMW.

There was quite a bit of work on the CV33 to get the fit correct and they are quite different from my existing Skytrex versions, which causes me a problem as I need one more ordinary CV33 to finish the RF company. The Alby Fiat 508 was so nice to build, I wish I'd found the model a few years back, in time for the big Battleaxe game. The Dovenque was difficult to get squared up and also a bit fragile so I have based it and not bothered with the tilt.

No crews yet apart from the kubel as I done have any suitable figures.
Posted by Fire at Will at 15:11 3 comments:

After an early distraction because of flaking paint on some colonials, I settled down and finished my US tracked armour. 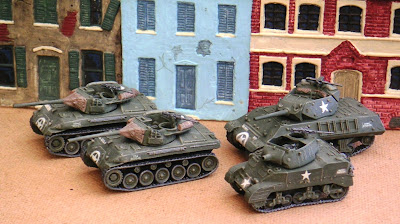 The pair of Milicast M18 Hellcats were something of a PITA as the resin was quite soft, the worst was that if you held the turret by the gun barrel for long enough it would begin to droop just with the heat of your fingers. There were also quite a lot of poor alignment of parts so filing and filling was needed. By comparison the Milicast M8 HMC was a firm resin and went together easily. The unfortunate part was that the wheels for the trailer were missing so I have put it to one side. These were old second hand kits so I suspect they reflect the standards of the time. The M10A1 was from Cromwell and a much more recent model as it was in the pale cream resin and assembled quickly.

Also no prizes for spotting the mistake that crept in somehow.
Posted by Fire at Will at 20:50 3 comments:

I'll be attending this event and selling off my mate's books and also all the stuff on my trading and sale lists (link).

Not bad progress last month, but I have still not decided what format to use for the legation walls for next years Peking game. Matakishi's Tea House has some useful ideas for gardens (see the bottom of the Afghan compounds article)
A slight change of emphasis this month as I concentrate on Colonials and continue to clear my WW2 vehicle stash.

Feels a bit ambitious, but as the nights draw in I can't do much else. No shows to go to either, but I will be participating in a SOTCW "Andreivian Tales" charity game at Meaols on the Wirral on the 27th and trying to clear some stuff at the next Warboot at Stockport on the 21st.

As well as finishing the sdkfz 222 and 231 I also completed the four preassembled Skytrex kubelwagens bought at Derby. The two armoured cars are Alby models, which are very well detailed 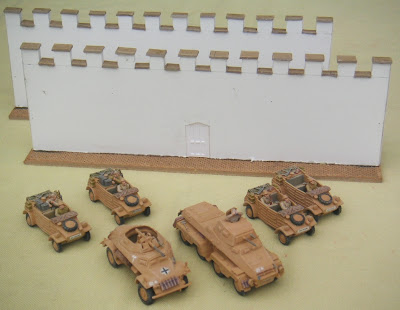 In the background are the two extra wall sections I am working on for use as the tartar wall at Peking.
Posted by Fire at Will at 16:22 2 comments:

It was an early start to get to Leeds from the other side of the Pennines. But we made it in sufficient time to get set up before the show opened (The clock change was a great help). For various reasons the Lance & Longbow Society game was Fornovo 1495, a game that I've played before. In concept it's very simple The Italians attack the flank of the French army on the march. However there is a river to cross and because of rain in the mountains it is swollen and difficult to cross. Typically, my dice rolling revealed no fordable areas in my half of the board, but the kindly umpire let me spend another turn looking and I managed to find a couple of passages. I gradually managed to get across, but my deployment was too cramped and there was no chance of preventing the French escaping off the table.

Only managed to take one picture of the game and it was blurred. 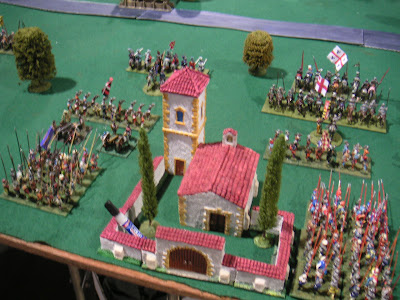 The new venue is a lot better than the old one, with more space and much better lighting. However it seemed that the number of attendees was down and they didn't stay that long. It began to get quiet after 1pm. The mix of traders was strange as well certainly compared to Sheffield and Derby so I do wonder if the show is sustainable in the long term. It was particularly noticable to us that there were two empty games tables and a trader missing, which doesn't help.

Of the other games I only managed to take a photo of the magnificent Hougoument on the next table. 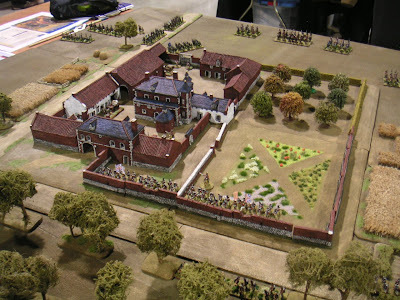