I've bought a job lot of second hand models and figures most of which I'll have to trade/sell. I'll be sorting them out over the next couple of days and post a list of what's to trade/sell. 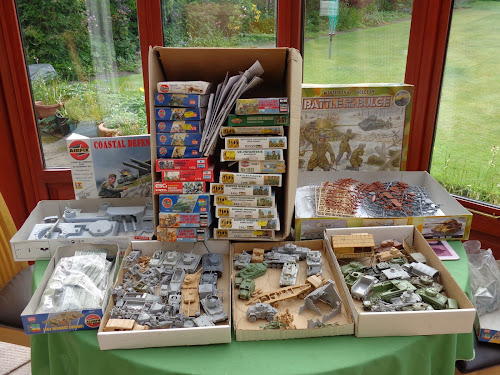 Since I'm working on my Burgundians I'm using this to keep a record of my references and links.

Books
Freezywater (Lance & Longbow) - The Burgundian Army of Charles the Bold
Hobilar (L&L Journal) Issue 19
Osprey - Armies of Medieval Burgundy, 1364-1477
WRG - Armies of the Middle Ages, Volume 1: The Hundred Years' War, the War of the Roses and the Burgundian Wars, 1300-1487
Casterman(Funcken) - Armies de touts les Temps - one of the medieval pages covers Burgundians
Richard Vaughan's books on the dukes of Burgundy - take your pick on whichever ducal reign you're covering - still best history published in English.
Wargames Soldiers Strategy 64 - the battles and sieges of Charles the Bold. Issue 30 covered the Burgundian-Swiss wars.
Renaissance Armies by George Gush, contains a chapter
Valois Burgundy by Vaughan, which compliments the 4 ducal titles
Artillery of the Dukes of Burgundy by R D Smith and K Devries

Flags
Plenty of excellent images on Dansk Figurspilsforenings
Some useful ones on Warflag
Lance & Longbow - Freezeywater flags using the same artwork as the book above.
Pavises - some decals from Little Big Men (28mm though)
Donnington Miniatures has a couple of Burgundian flag sheets

I'll be adding more as I find it, but any other useful references/links please let me know.

Thanks to Simon and Bob for the updates so far

Back to normal. I've finished the 251/3s that have been on my painting table for ages. I had a bit of a battle fixing the frame aerials, which was not helped by using some epoxy adhesive that didn't set properly!

The DAK version, plus some Sdkfz 10s, a Sdkfz 221 (both from Frontline) and a Horsh field car (Ready to Roll) 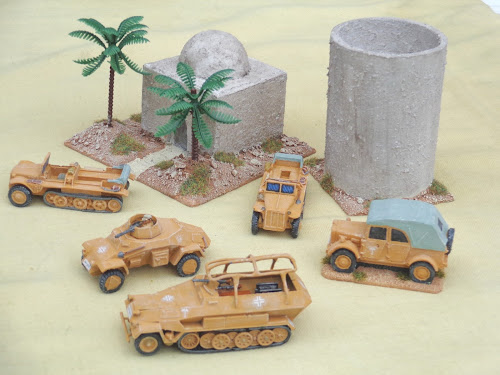 The early war European version, the basic vehicle is matchbox and the equipment is a mix of bits from SHQ, the aerial was a simple loop so I added the extra parts from copper wire. 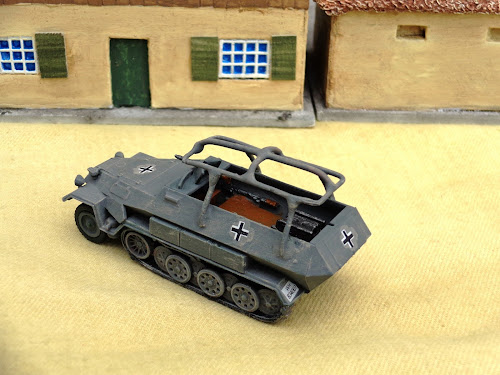 I'm currently taking an enforced rest from painting as I crushed my thumb in the car door - idiot!. So here's some pictures of the Needles Old Battery from my recent trip to the Isle of Wight. (link to the National Trust site)

It's a great mix from the Victorian old battery to the new and then the "secret" rocket testing site, despite being bright there was a gale force wind and a possibility that the site would be closed.

Some pictures of the old battery, the entrance across the ditch. 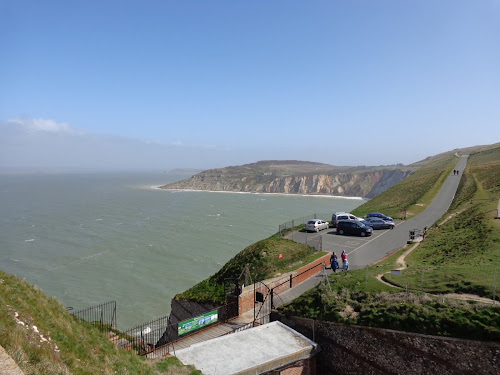 Overview of the battery 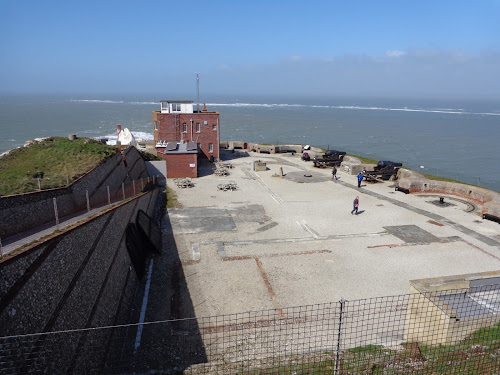 The needles lighthouse, the white crests in the mid ground mark the shoal so that ships have to pass in close to the battery 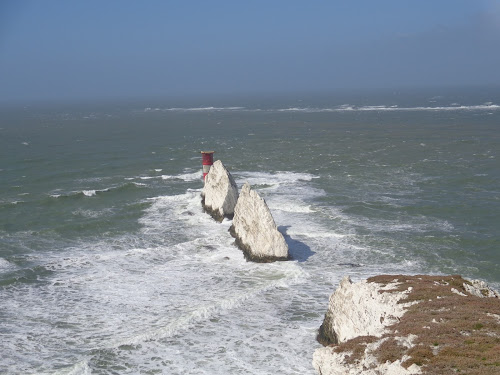 One of the 7 inch Armstrong guns, luckily when they came to the end of their useful life they were just tipped off the cliff instead of being sent off to be smelted down 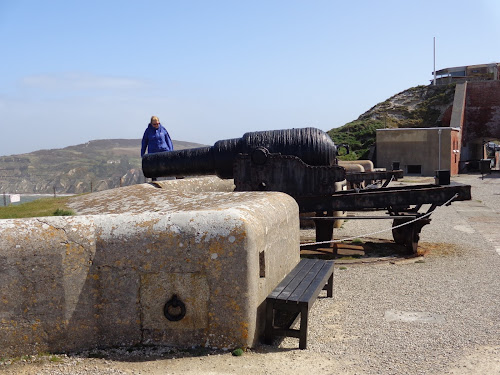 Finally, an excellent picture of the battery from the sea taken by Steve the Wargamer, thanks Steve.

First is the armoury in the Doge's palace, cases full of renaissance arms and armour (no photography permitted) and an exhibition with a number of plans of various fortified towns. 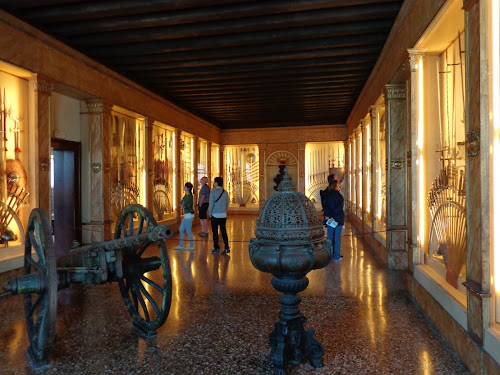 The real gem is the Museo Navale Storico, the Naval History museum, filled with ship models, uniforms, etc. It's only 1.55 Euro to get in a real bargain and my wife enjoyed it as well so I got plenty of time to look at the exhibits.

The entrance has an original Maiale (pig) the two man human torpedo used to attack various anchorages used by the British navy in the Mediterranean. 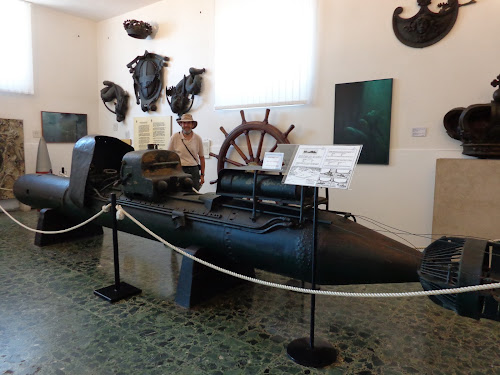 A couple of nice Galleys 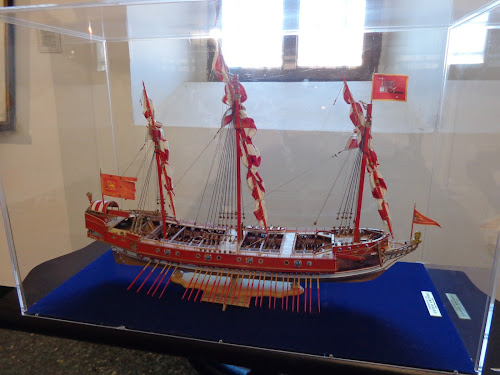 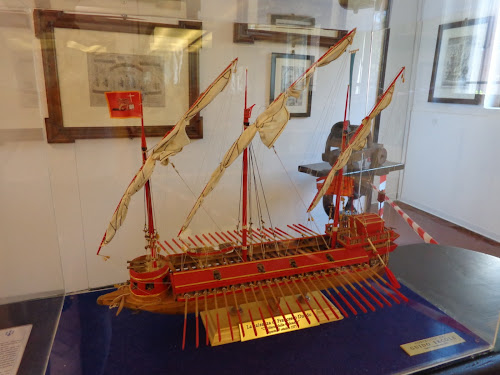 The Doge's barge, burnt by the French when they occupied Venice 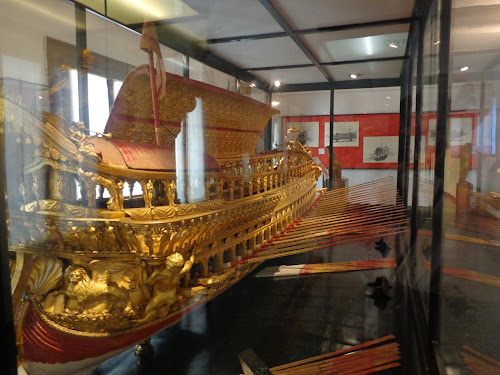 Some nice figures, I need to look them up in my reference books 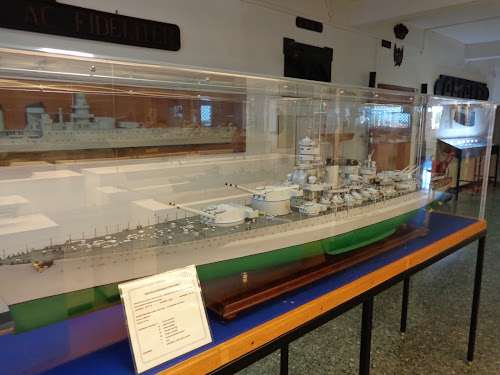 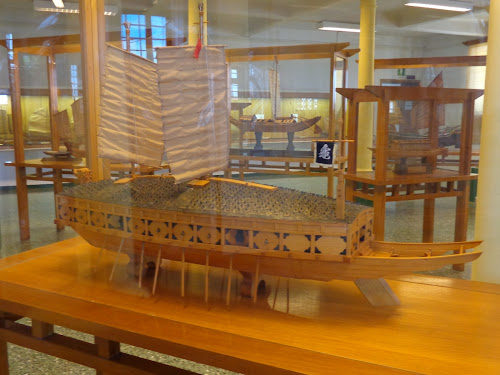 Outside is an enterance to the Arsenal, shame it's not open to the public as it's still a Military dockyard 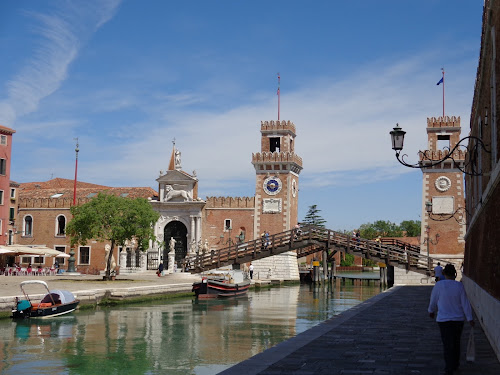 For once I was just a normal attendee at the show as for some reason the organiser couldn't fit our game in. Therefore I spent most of my times around the trade stands having a good look at what wa new and discussing forthcoming releases.

Just a few pictures from the show of games that caught my eye.
A "Fun in the sand" Sudan game 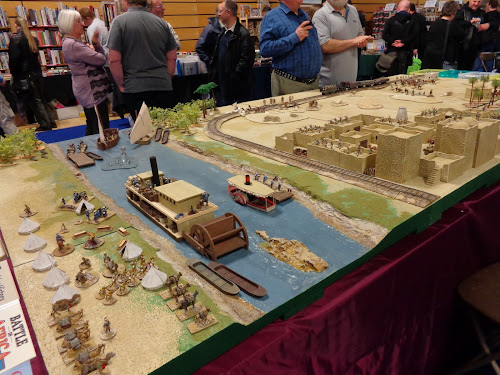 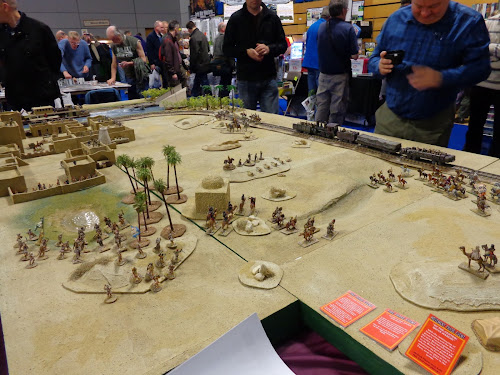 The best of the show for me, the Ilkley lads Cerignola 1503 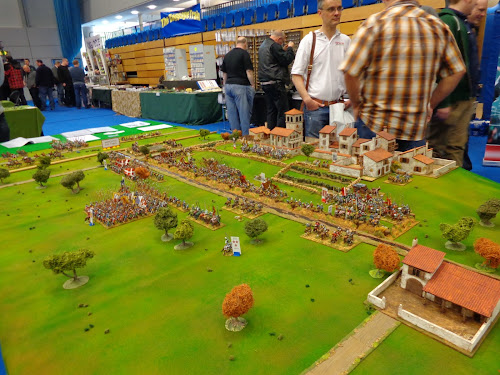 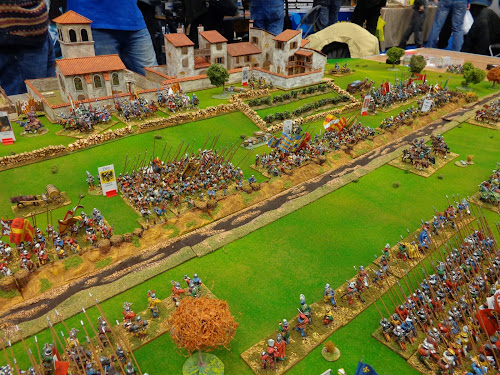 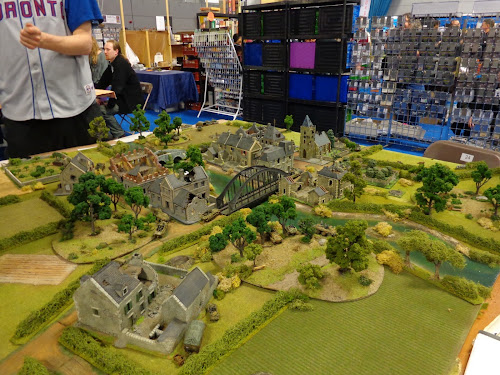 Gross Beeren, a nice big Napoleonic game, but the buildings seemed rather odd. 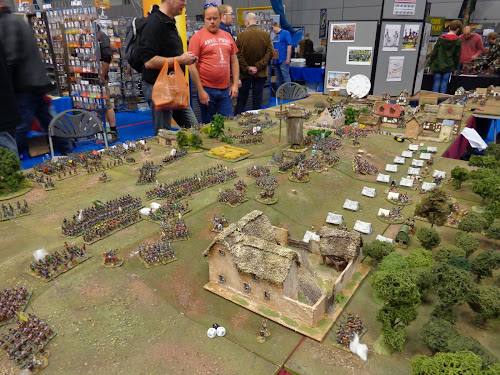 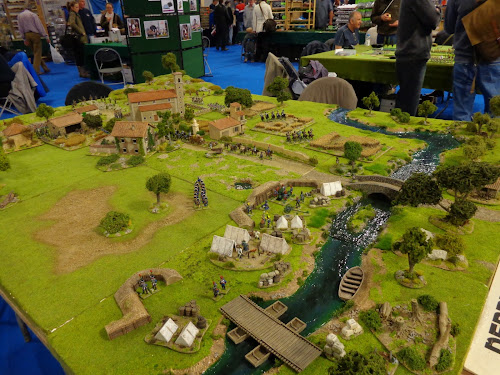 Back from Venice and off to Triples

Picked up a last minute bargain just over a week ago so I've had a week in Venice. But only one pictures until after I go to Triples today.

Yes, I’ve got 25,000 20mm figures painted, but it has been achieved over forty some years, and reaching a milestone (millstone?) gives me a cause to reflect on my real objectives through all these years of painting, like?
1.      Was my goal to paint the maximum number of figures?
2.      Will they all be used in games?
3.      Did I actually use what I painted?
4.      How many projects were left by the wayside?
Before addressing these and other thoughts, I think I should say that through out all these years, my hobby and the support of other gamers has been a source of motivation despite what life and work has thrown at me.  So on to the answers, which in the main are definitely yes!
1.      No, It was no a numbers game.  I’m a plastics nut for various reasons, partly because you can produce large armies at low cost, but particularly because of the ease of transporting the armies.  Originally by restricting myself to plastics, I felt I was controlling my acquisitive urges, yes I could create large armies, but only in a limited number of periods.  But then the ranges exploded as more companies produced plastic figures.  These days I have to challenge myself before making any purchase of new figures.
2.      Yes, but usage is partly determined by finding opponents, but more often in my early years I found that often no-one could provide an equivalent opposing force, so I always endeavoured to produce armies for both sides in a conflict.  But that said, in my early years we didn’t care so much about mixing 20mm and 25mm.  Some armies have dropped in and out of fashion, for example “Black Powder” has fired up my underlying interest in Napoleonics again.
3.      In overall army terms, they have all been used, but various sub units and add-ons have never seen action.  A better question is do I still want them and intend to use them and the answer is clearly yes.
4.      Luckily, not a lot.  My biggest mistake was in starting a Russian Crimean Army using Esci figures, as so little was produced.  What it did teach me was to wait until either sufficient figures were produced for the period or I felt confident I could convert whatever was missing.
Perils and Pitfalls I’ve encountered
·                The low cost of plastics mean you can easily buy the figures for an army, but do you have the time to paint them before your interest moves on to other subject?
·                Interrelated, than while plastics are quite economic, the extras that might be needed to complete an army may be unavailable, or make it significantly more expensive than planned.  My original Napoleonic Russians were a case of this as I had to buy metal Hinton Hunt cavalry and other bits.
·                Yellow bayonet disease – this was a problem in my early years with Airfix plastics and enamel paints, these days with washing the figures in the dishwasher using acrylic paints and not using figures for casualties the problem is only slightly worse than metal figures.
So where does this leave me in terms of future painting and modelling?
a)             I intend to stick to 20mm with the sole exception of some skirmish figures, e.g. for Saga, but these will be small in number
b)             I will not start any new periods/armies before there are sufficient figures available to complete it.
c)             Concentrate more on a replace and sell or upgrade basis.  Too many of my early figures need a complete rework, like my WW2 Soviets, where I sold off the old units and produced a new coherent force.  My plan for later this year will be to do the same for my WW2 US forces (if PSC bring out it’s heavy weapons set).
d)             If I keep on using Black Powder or similar. I’ll need more casualty markers
Reality check
a)             Quite achievable
b)             Trouble is some periods tend to morph into others
c)             I’d better watch out for the cases where upgrading turns into more effort than painting from scratch
d)             Make sure I don’t discard “suitable” dead figures
Posted by Fire at Will at 15:23 2 comments:

Now for the breakdown of my 20mm stuff by type:

It was quite a shock when I saw how many tanks and AFVs I had, they are only added in small numbers, but they have certainly built up over the years.

The coding has changed somewhat as part of my checks last year on my Excel database. I created a single database rather than the set of individual spreadsheets. “Riders” is a very dubious category as it clearly includes limber riders, and quite a few of the newly added vehicle passengers, but it certainly doesn’t include all the vehicle drivers. So that’s a task for whenever I get armies out for a review.

I'm also considering extending the coding and including all my terrain so I've got a single inventory.
Posted by Fire at Will at 07:38 4 comments:

Well a goal of some sort has been achieved as according to my database I have 25,001 20mm painted figures in my collection.  I have to say that the stash is currently at 6,449, so there is no danger of my stopping painting.  But I thought it is fitting to summarise what’s sitting in boxes waiting for games and add links to any army reviews.
Notes
This does not include my 28mm ECW and a small number of other skirmish figures (272), plus there are also some 15mm (122) and a substantial number of 6mm (2,652).  – And I’ve just noticed that this doesn’t include my 6mm WW2 stuff.  Dohh!
Only figures are counted, not vehicles or other equipment (see part 2)
Posted by Fire at Will at 10:47 No comments: