I thought this would be a simple task, painting another 48 Revell Aztecs and then rebasing them along with most of my existing figures for the DBA-New World rule variant.

Now for the army, in general I mixed up the old and new figures, I'm not sure why some of the flesh colour is so different, but it is on my earliest figures, so they would have been painted around 20 years ago. This has been a "good learning experience" and has convinced me that rebasing to my current standard is not as simple as I thought. The first problem was the old paint plus scatter was quite firmly fixed, so I decided that I could easily paint over it - wrong - it doesn't adsorb well, so I needed to dilute PVA it first. Second, it was a much darker shade than my desert base coat (Wilko Coffee) so greater precision was needed in repainting. Finally even after painting the colour/texture difference is still obvious close up. 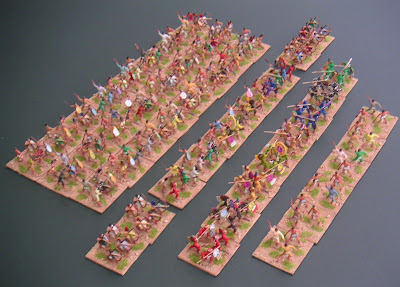 The army drawn up 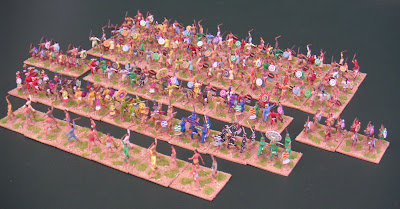 Close up of the Military orders 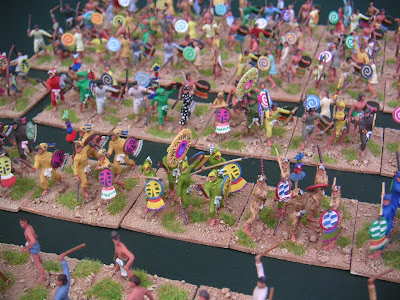 Apologies for the quality of the pictures, the daylights not very bright at the moment.
Posted by Fire at Will at 21:45 1 comment:

After another play test last week the rules have now advanced to a stage where I can publish them. They can be found with my other rules over on esnips.

These rules are basically a derivative of my AWI rules with changes to better reflect the period.

For my next distraction I modified the HaT French Field Forge into a two wheeled version. It was quite simple with just the front cut down slightly a pair of poles added and the rear wheels relocated to the point of balance. It's a pretty good reflection of the forge plan in the Almark book on the French Artillery by Michael Head. 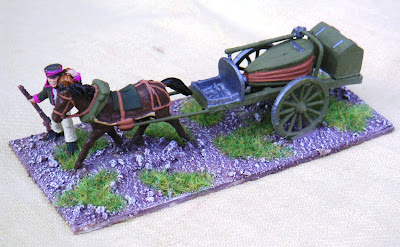 The dismounted Dragoon in Polakem came from one of the Strelets sets.
Posted by Fire at Will at 16:35 2 comments:

As I mentioned under distractions these sneaked onto my painting table and have now been finished. I'm still not convinced by the new soft plastic that hat uses. Despite a thorough clean in the dishwasher the paint still takes days before it feels dry and I'm not sure how well the pontoon parts will stand up to being assembled and dismantled as the paint seems more susceptable to wear. 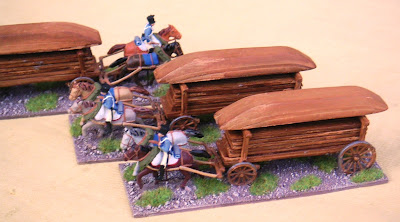 I haven't painted the woodwork the usually French Artillery Green but left it as wood so I can use them with other armies as necessary. I have painted the riders as Train d'Artillerie rather than the Train de Baggage or Train de Genie as the pontooneers came under the artillery branch.
Posted by Fire at Will at 16:08 3 comments:

Yes progress has been slow, it's because I've been distracted away from the Conquistadores and Aztecs.

I had started out sorting out stuff to take to Warboot this coming Sunday. Typically I came across my HaT pontoon wagons. These are moulded in their awful bendy plastic so it was a a keep or sell decision, I decided I might as well use them, so I sorted out some limber teams for them (from the baggage wagons!) and they are now under way. I also found the remaining HaT field forge and this also jumped onto the painting desk and has been modified to a one horse version based upon drawings by Michael Head.

Then it was a quick visit to Modelzone because I'd run out of paint and came away with the new Zvezda Zaphorzian Cossacks, a very nice set so these have also squeezed onto the table along with a few of their Russian noble cavalry.
====================
A further distraction
Just got in after cutting the hedge all morning to find a box of goodies from Andy Harfield, this will keep me busy through to Xmas
2 x Waterloo Italian Heavy Gun
1 x Waterloo Italian Infantry Support Group
2 x Strelets Reitars of Charles XII
2 x Strelets Leib-Drabants of Charles XII
1 x Strelets Russian Dragoons of Peter I
1 xCaesar WWII French Army
1 x Mars Polish Infantry Mercenaries (Haiduki)
1 x Pegasus WWII Russian Infantry Summer & Winter
Posted by Fire at Will at 08:19 No comments:

To answer a recent question here are a couple of pictures of the storage system I used for my figures. The basic tray is the top from A4 paper boxes, the sort that hold about 6 reams. I cut them down to a suitable height for the figures and then add a couple of partitions (usually I split the tray into 3 equal sized areas). The partitions also ensurse that the trays don't collapse into each other. 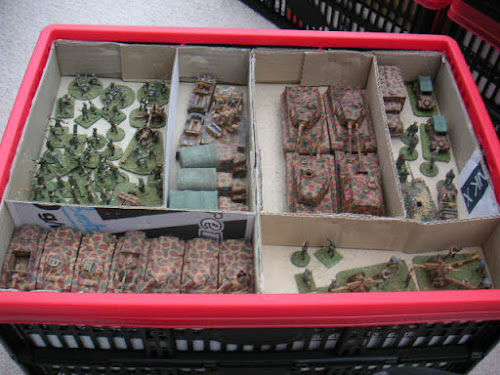 The trays then fit neatly inside a folding stackable plastic box (most of mine come from Tesco). Depending on the tray height either 6 or 8 trays fit each box 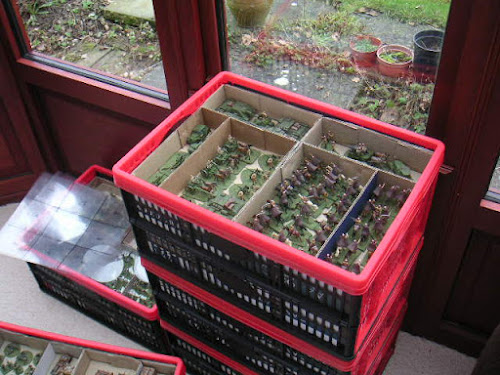 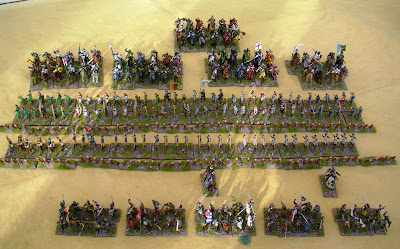 The last items to be complete were the archers' stakes. These were made out of sharpened matchsticks stuck into air-drying clay and then textured the same as the other bases. 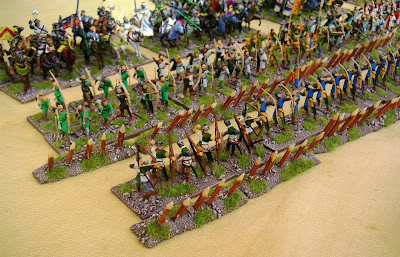 Rather an unusual unit, the Hungarian diet refused to raise any Landwehr, but rather agreed to raise the Insurrection for 3 years. They put in a very poor performance at Raab in 1809, but why is that a reason for not having a unit of them? Especially as I had some Hat Brunswickers that needed to be used somehow. 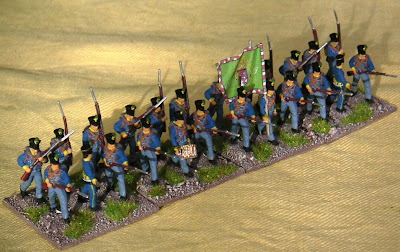 Strictly the unit should have tight Hungarian trousers rather than the loose ones shown here, but for recently raised troops I'm not sure all the uniform would be as per regulation. The flag is from warflag, but it is a Hungarian SYW colour and it makes the unit different and I'm sure old colours could have been reused for these units.
Posted by Fire at Will at 20:49 1 comment:

Marching through the last of the daylight is the last of my GNW Russian Infantry, this time painted as the Saxon Regiment Sacken. A rather splendid sight, or is that just the effect of the red coats. although the majority of the unit are Zvezda, the musicians are from Strelets

I used the excellent Northern wars site by Dan Schoor for the uniforms and colours. There were Saxons at the siege of Vienna, but I'm not sure if the uniforms were exactly the same.

They certainly tempt me to continue with a few more Saxon units for the period
Posted by Fire at Will at 20:16 No comments:

A strange moment, as I have been struggling to decide what to paint next. With 6K figures in the stash, availability isn't a problem, it's motivation or whatever. I had hoped to pick up some more Strelets figures for my WSS armies and some Resin tanks at Fiasco, but neither were available. Looking back at my year plan was not much use as it's virtually complete, except the work currently in progress and the extra WSS cavalry.


After some thought I have decided to finish off the last of my Revell Aztecs from the stash and then rebase them and some additional Conquistadores to be able to play DBA in the new world. I also think the Conquistadores could be used for fighting my Ottomans, Marks Mini Malta Blog gave me the idea.

An enjoyable trip over to the Leeds show are the armouries, but there seemed to be more problems than usual with non-attendance (maybe due to the weather)as two major display games failed to turn up.

I was with the Lance and Longbow and this time the game was Novarra 1513 where the Swiss surprised the French camp. both games played during the day recreated the rout of the French 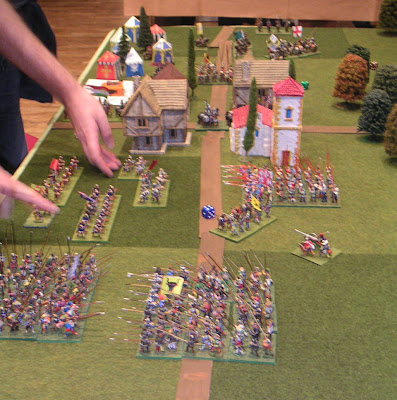 Just nearby (beyond the SOA) was the Ilkley lads ancient naval game which looked impressive, but I'm not sure about the counters on the ships. (link)
In the other direction was an impressive display by Legendary Wargames advertising their weekend games, unfortunately my pictures of there excellent Sudan setup were blurred, so you need to have a look on their web site.
There was an impressive 15mm Israeli-Syrian conflict using Rapid Fire, which looked very tempting. 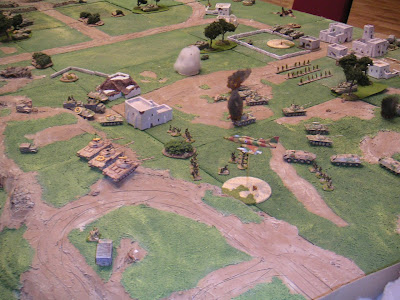 Nice vehicles and terrain, but I did feel that the helicopters could have been a bit smaller 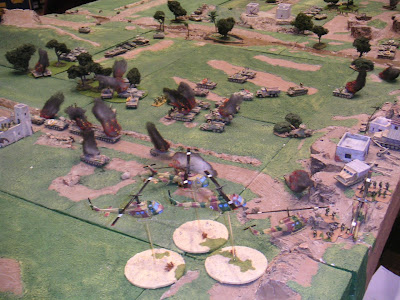 Once again I sold off a bit of my plastic stash, but I only bought a couple of pots of paints and some dice so not a good performance on the purchasing front. It just seemed that the bits I wanted were not on sale at the show and no new temptations appeared.
As always the best bit was meeting up with lots of other wargamers from forums etc.
Next show should be "Recon" in December as I mucked up booking Antwerp.
Posted by Fire at Will at 20:47 3 comments: