A long time waiting to be finished

These are a pair of Italian TL37 trucks that were purchased as mis-casts from EWM, way back pre-Covid.  I repaired the obvious damage and then debated what armament to give them.  I originally was planning to use some left-over PSC guns to give them a 75mm gun, but with the advent of the 3D printed I printed some Breda 20mm AA guns for them.  The crew are all 3D printed as well, and it makes a fine addition to my Italian army. 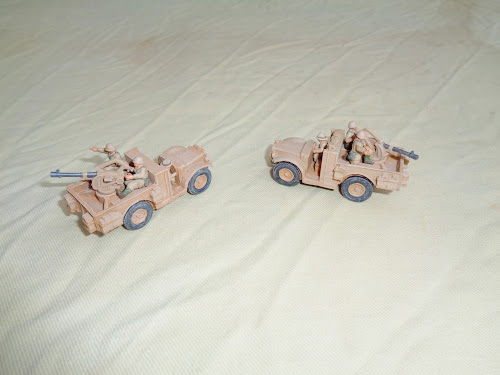 These are my replacements for the versions that "exploded". The turrets came from the originals so I did not have to reprint them. 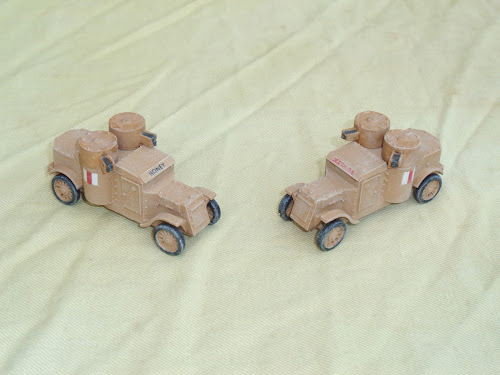 The originals are here link
Posted by Fire at Will at 11:17 1 comment:

I was putting away the rebased limbers and realised that using them with non rebase gunners would look odd so I decided to do them. 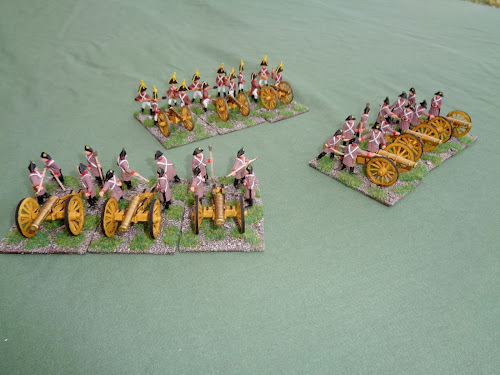 The 6 foot guns all have HaT crews, but still have my old Airfix gun conversions (RHA barrels, axles and wheels and French artillery trails) 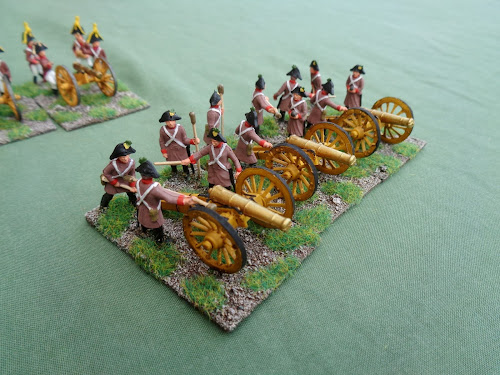 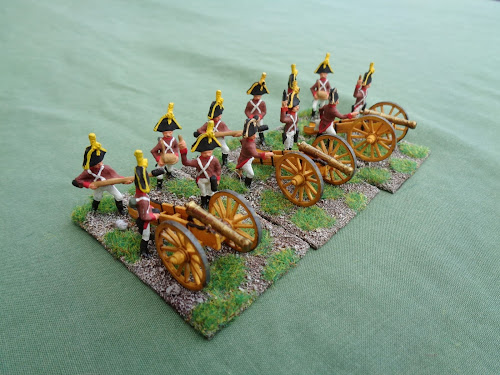 While doing it I realised that I had 9 guns but only 8 limbers, luckily I had printed a couple of spare limbers.
Posted by Fire at Will at 14:49 1 comment:

A small addition of bits I have discovered missing in my collection, all 3D printed. The trio of carriers were included as JP in Portugal pointed out that they were in the Seelow Heights scenario book, I now need to find some crews for them. 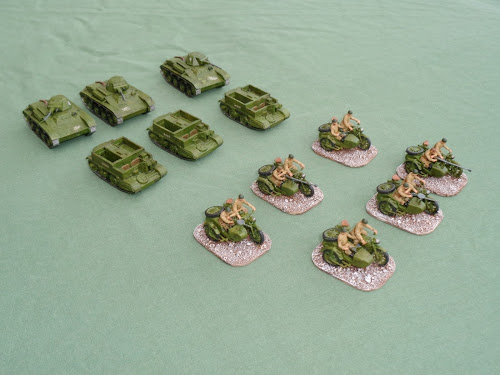 Some highly detailed motorcycles by Hartolia. Printed at 1/76 they are very fragile, so much so that I have left some of the less obvious supports in place. 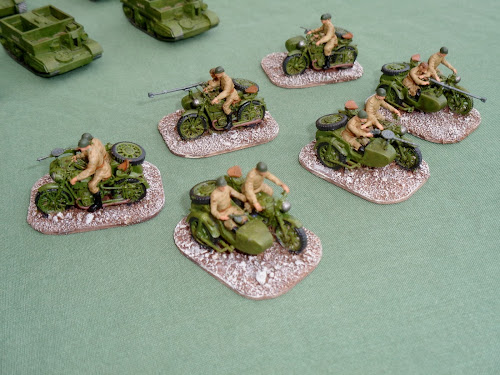 The T60s, much more suitable for small scale scenarios 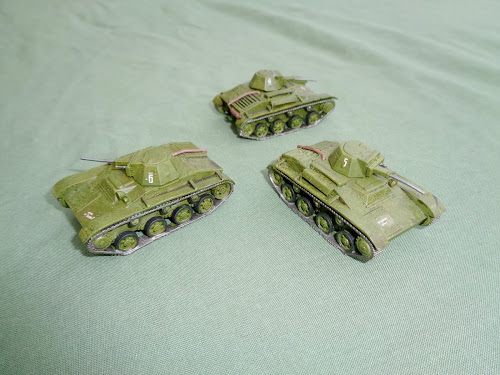 A close up for those interested in the detail of the road wheels. It also highlights mistakes I made in cleaning up the print! 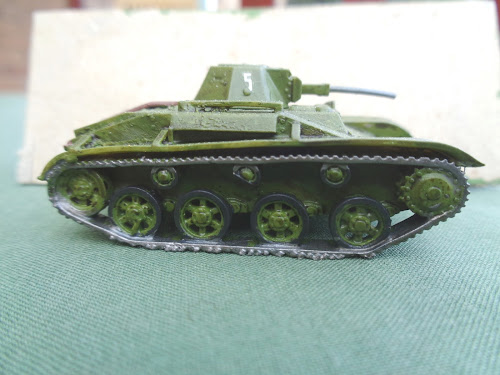 Not my usual French cavalry

But those from WW2, 3D printed as needed for RF Blitzkieg Battlegroups. I would have used the HaT figures for WW1 but they are currently unobtainable at sensible prices. 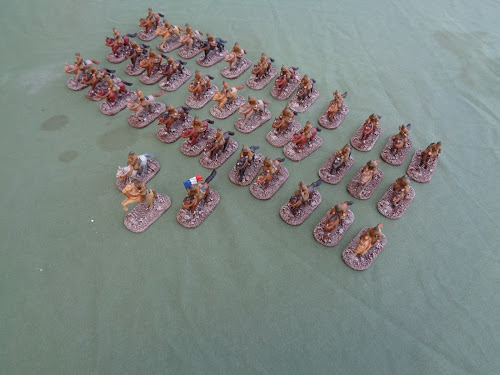 Like the motorcyclists there are some fragile parts, and I need to investigate some more flexible/robust resin before I use the printed for major production of figures. The sculpting is a bit crude, but passible for WW2 as there are far fewer details. 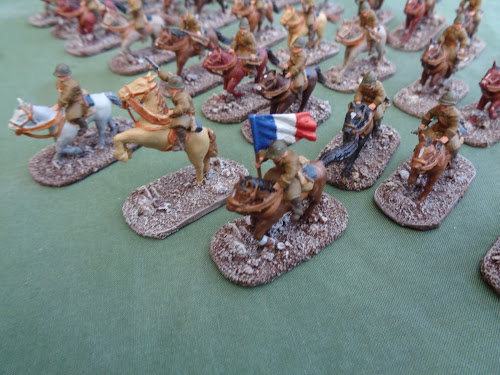 I also printed off some dismounted figures 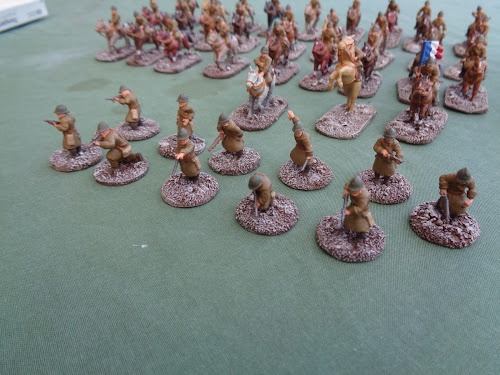 Both the mounted and dismounted figures came unbased, so I learnt how to digitally add the bases before printing, which had the advantage I could print them the exact size and shape I wanted. The only downside was they warped slightly on curing/drying in the sun.
Posted by Fire at Will at 08:09 2 comments:

I had printed 3D printed motorcycles combinations before, but I needed more to make up the maximum needed for the RF Blitzkrieg Battlegroups book. I also printed some nice solo motorcycles that were also available in the same file, here is the whole collection. 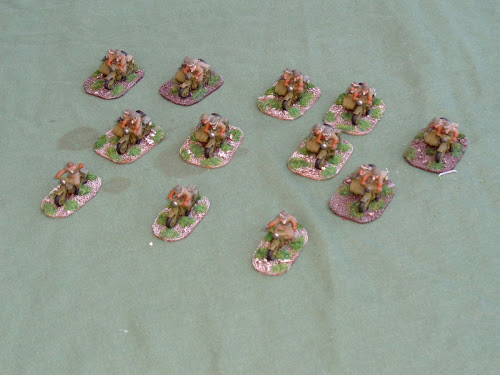 As before the MGs were very fragile 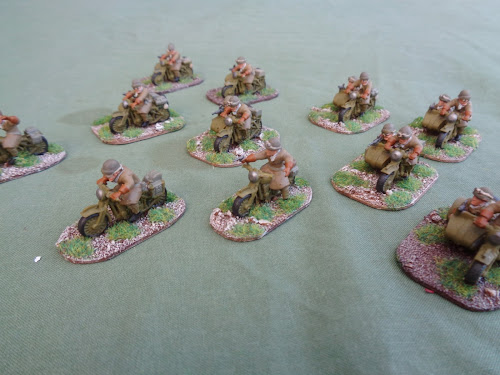 The only source of a decent Austrian Limber in 20mm is in the Austrian Cavalry Artillery set, which is virtually unobtainable at sensible prices, so when I found an STL file for $3.50 I had to get it and print off as many as needed to replace my old Airfix limbers, so here is the result after rebasing as well. 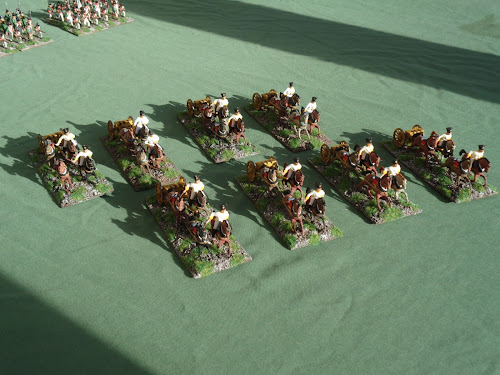 The limber is not perfect as the gun pivot is over the centre of the axle and as a result the ammunition box is too far forward, but it was close enough for my purposes and better than what I had been using. 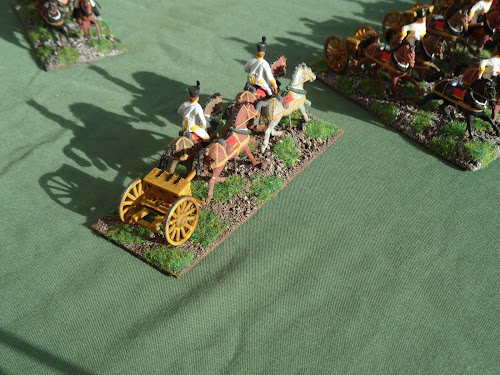 I did attempt to adjust the file using 3D builder, but the task was beyond the capabilities of my PC.
Posted by Fire at Will at 07:24 1 comment:

The variety of uniforms for the Cisalpine  Republic and other associated bodies such as the Lombardy Legion tend to have one factor in common, which is the use of green rather than blue. So here are some extra units to support my Republican French in Italy. 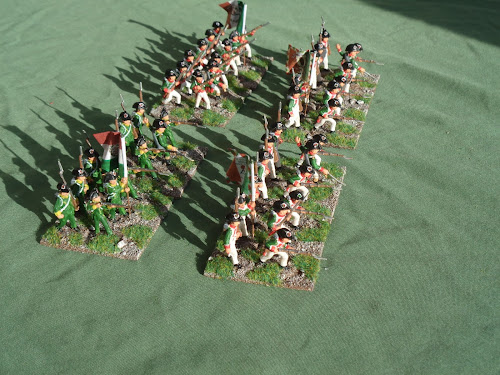 Given the difficulties of finding a definate answer, I just picked a selection of the uniforms used at the the time and a similar selection of flags 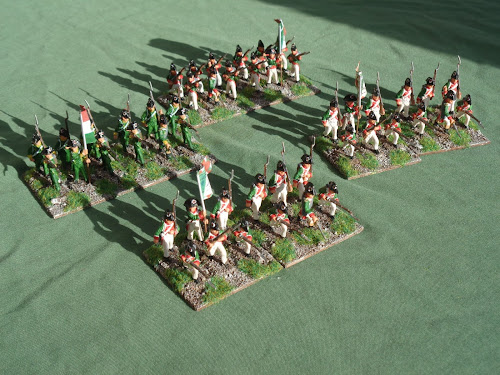 A collection of WW2 bits

Almost all of these are 3D printed except the Spitfire. 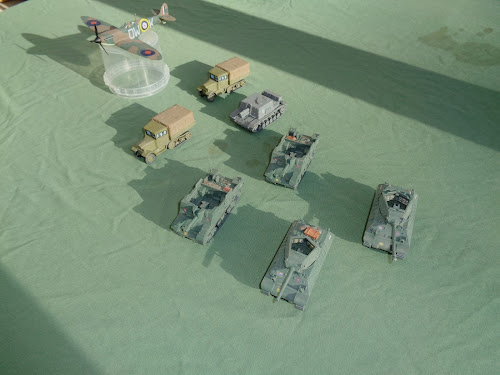 An Achilles and M10 to replace both my Armourfast and Ready to Roll versions. 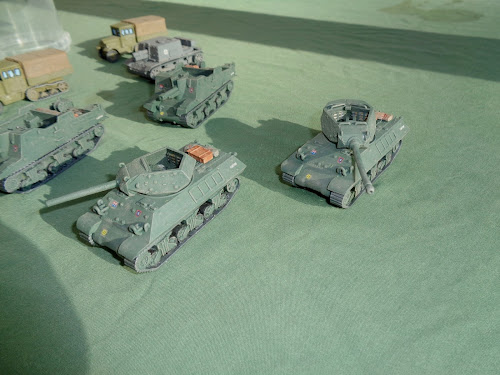 A pair of 1/76 Sextons to replace the PSC 1/72 versions, I just need to find some suitable crew. 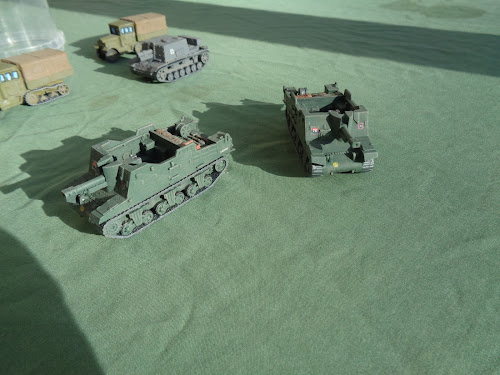 A Stug 33B to replace the version that exploded. 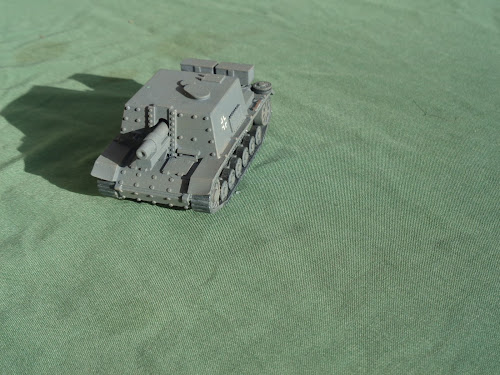 An Airfix Spitfire that is the right version to use for early war unlike my existing model. 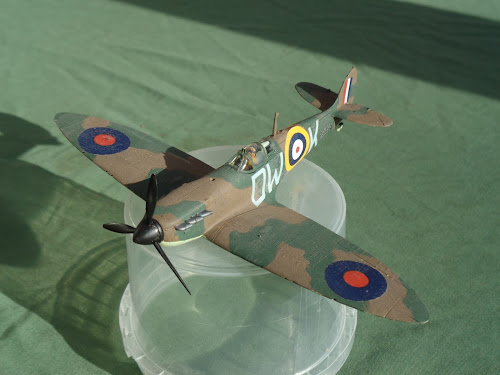 Also included is the pair of Somua MCGs shown in my last post
Posted by Fire at Will at 17:19 1 comment:

I was always frustrated by the look of the Fronline half tracks that I bought for my early war French army, but when I checked my sources it didn't look at all like the Somua MCG (or MCL) that I assumed it was supposed to represent. Move on more than a decade and I start looking fora Somua MCG to print, but no luck. But I did find a Vielfachwerfer auf Somua MCG so I printed the tracks for that and modified my old Fronline models. 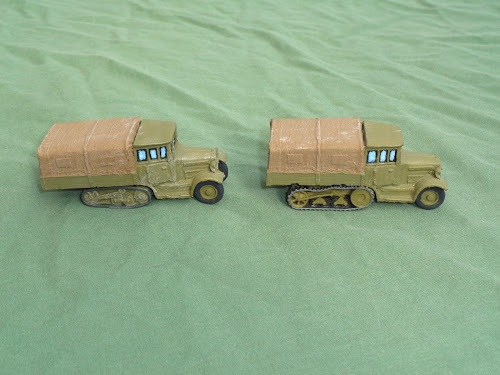 The original is on the left and the new version with replacement tracks on the right - not prefect but quite an improvement
Posted by Fire at Will at 21:45 No comments:

Again lack of progress, with the same pace continuing in Q3 as in Q2, and only completing 757 items so far this year. This is partly due to a number of problems with my resin printed vehicles, most of which have had to be drilled and drained of uncured resin. Even so some have still split and some irrepairably so.

First and foremost my plan is to meet with as many friends as possible, assuming that retrictions come to an end, other than that I'll be working on three themes. - underway - Beacon Wargames club is well established and we've now celebrated our first birthday. There have been less shows than pre-Covid and family comitments have continued to prevent me from attanding others. I had hoped to get to Attack at Devizes, but my Mother's guest room was suddenly shut down because of Covid.


Game specific projects
Reducing the existing stash, I'd like to make at least a 10% reduction - still underway - I had a purge in Q1 and sold some surplus on ebay and have started again in Q4
Exploiting the 3D resin printer - I've learnt about post production problems, I have lost numerous vehicles due to the models "exploding". So far so good with my latest batches with have far larger vent/drain holes. I have also learnt how to slice and merge models using 4D builder.
Posted by Fire at Will at 13:06 1 comment:

So I only painted 32 cavalry last month, so I felt I needed to breakdown the cause for my loss of output. I was away for aa third of the month and once I returned I spent most days printing a batch on the 3D printer. Given that this takes at least 2 hours per batch sorting out the files, then printing and cleaning up, so there goes another third. As for the rest a lack of motivation and being distracted (see below) explains it. So there are loads started, but not much finished! So of the items carried over
Items started but not planned for
Posted by Fire at Will at 06:54 No comments: