A picture for those who want to see how I doubled up the number of trucks from the PSC medium trucks set. I found it easiest to do this with the Maultier version by just gluing two thick length of sprue to connect the cab to the rear tracks. A couple of spare wheels from the bits box with a sprue axle completes the running gear. The back of the cab is almost hidden by the high cargo bay sides so a simple piece of plasticard cut to size was sufficient. The cargo bed is another sheet of plasticard scribed every 2mm to look like planking. 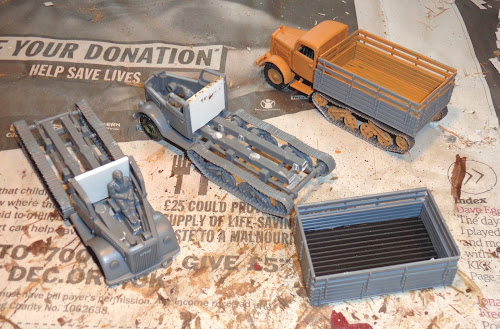 The driver and his mate were chopped apart and allocated to individual vehicles.
Posted by Fire at Will at 11:04 3 comments:

Completed both packs of Pendraken/Minibits (Red Vectors) Russian village buildings(link). Unlike some MDF kits there is no need to sand parts to get them to fit. The roofs like most MDF kits are the weak point so I added planking to most of them and some thatch to the others. As I dislike the raised edges on bases I tried trimming them with a sharp knife and was surprised how easy it cut. I'll be doing this with all my MDF in future. 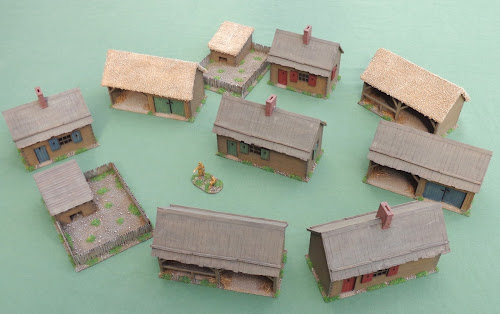 Most buildings are based on 60mm x 120mm so they are compatible with my modular buildings, and I think they will see action in a number of games, not just those set in Eastern Europe. 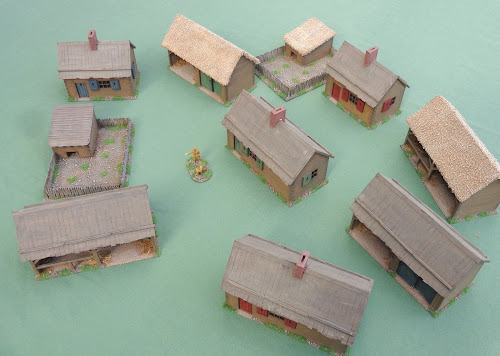 Finished a couple of 100mm guns and added some of the crew I finished last year. 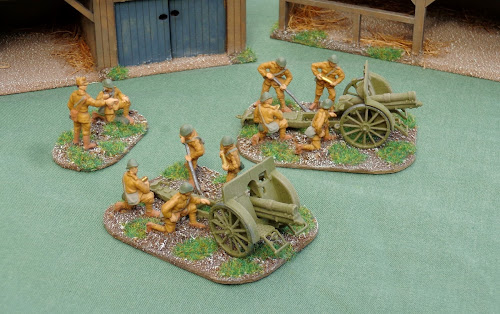 The arrival of the british CMP trucks from PSC released a number of vehicles for re-use with my BEF. I just added khaki-green stripes and new decals for the 3rd Division. 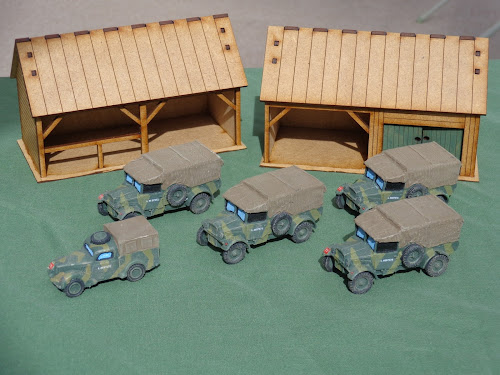 I also finished off a couple of PSC 18/25 pdr guns and reworked a pair of Airfix limbers. 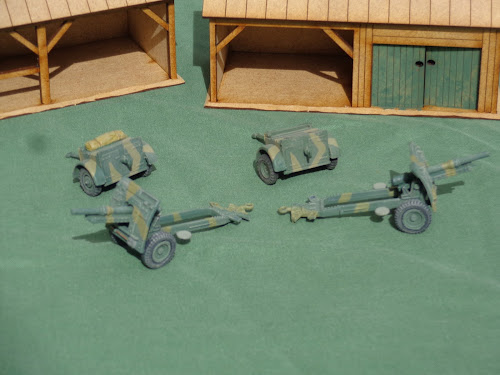 A9 Cruisers for the BEF

The second batch of three, this time to go with my small BEF force for 1940. I had hoped to use the MIG Jimenez Armo Khaki Green straight, but it turned out too Khaki so I had to repaint all three with a 2:1 mix with Vallejo Olive Green, which seems to give the right effect. 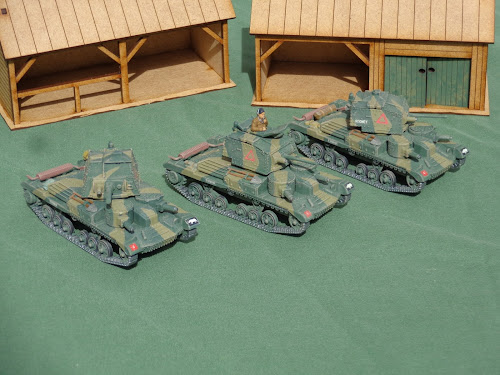 Two have 2 pdrs and the third is the close support version with a 3.7" gun. Luckily I managed to find enough (slightly oversized) 1st armoured division decals. 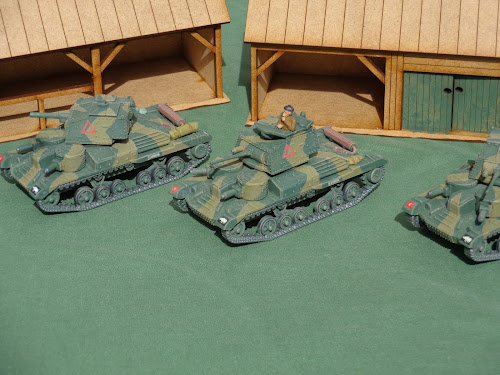 My pictures from the weekends gaming near Sheffield. The general situation was in mid 1918 the Russian Revolution was in full swing and the newly independent state of Andrevia was beset by enemies on all sides and also subject to internal politics.

My Saturday morning was spent playing a game of Pulp Alley where my band of thieves attempted to steal an ancient fez from the Andrevian museum of antiquities. In the afternoon and all Sunday I commanded Woosterforce a British intervention force in the region attempting to thwart the ambitions of the Central Powers and Bolshevik Russians

The eastern front (Wooster force would appear on the road on the left hand side and advance north. 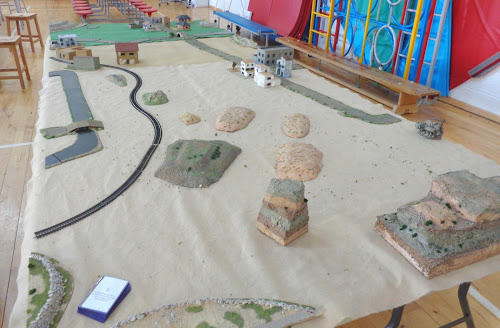 The Turkish/Russian trench lines, the Russians have departed leaving a Andrevian force holding the line. 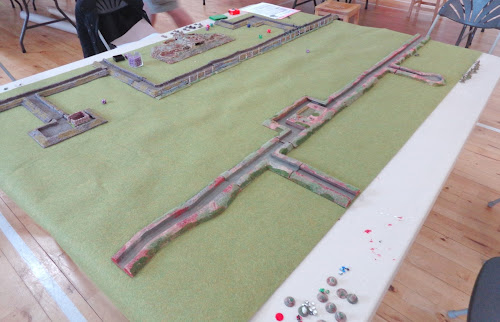 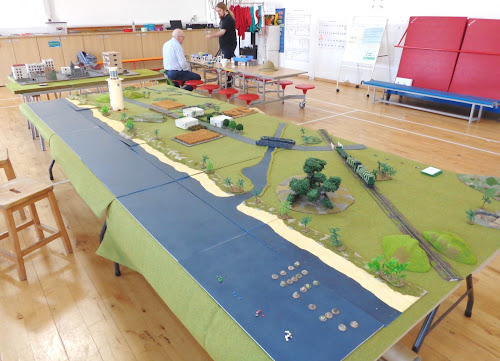 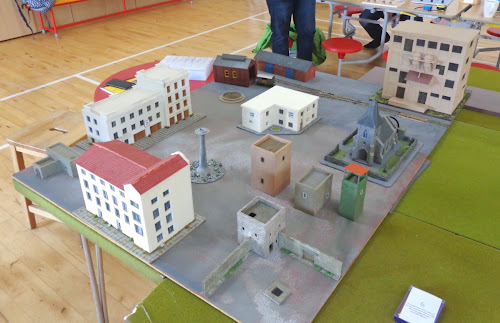 The museum of antiquities 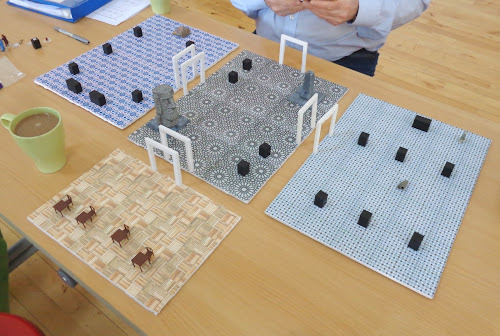 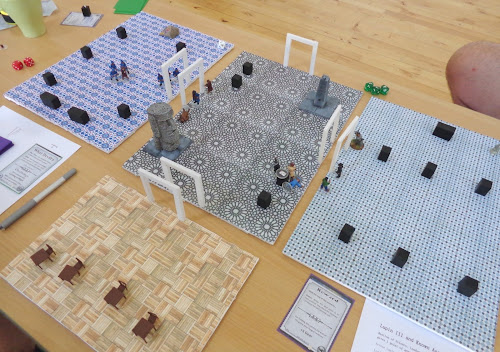 Having the initiative was marked by wearing the pith helmet 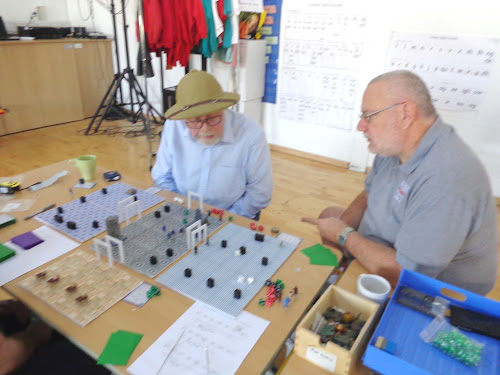 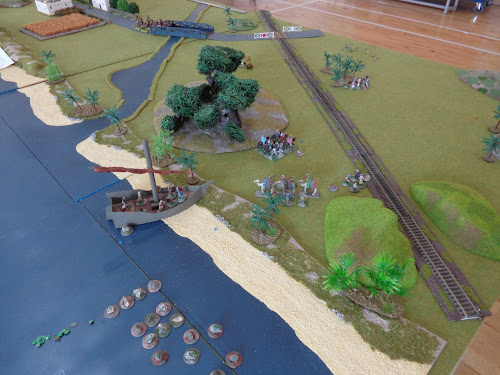 Turks starting their assault on the Andrevian trenches 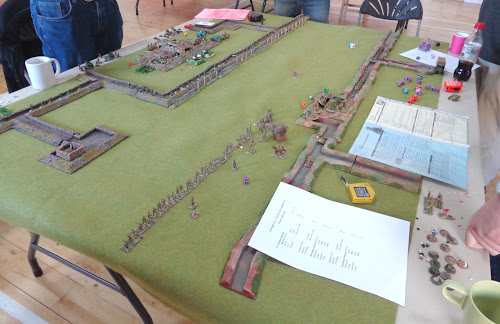 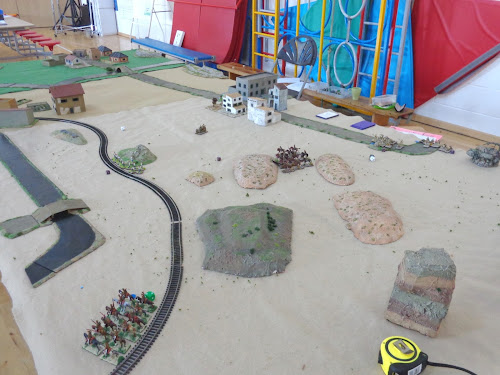 After being stopped at an Andrevian check point the patrol cars head back to report to Brigadier Wooster, however a random event sends one car across the desert towards the nearest "enemy" a Russian unit that has appeared (on the railway behind the hill). 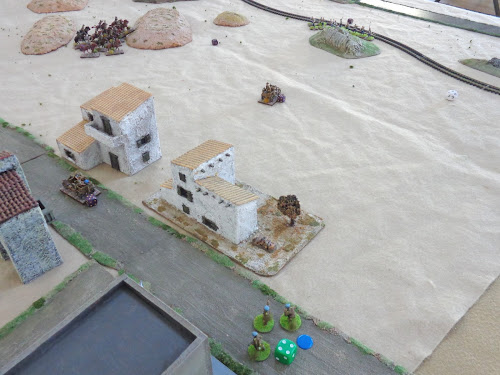 Turkish numbers are beginning to tell 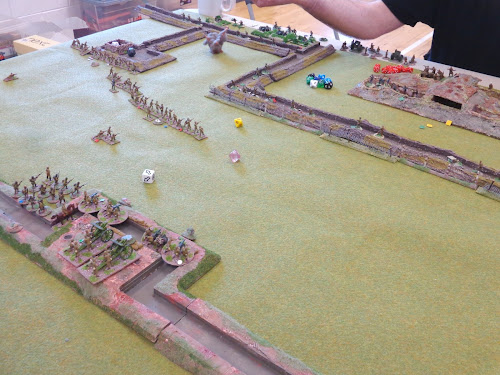 Russians negotiating with the Andrevians observed by the British. 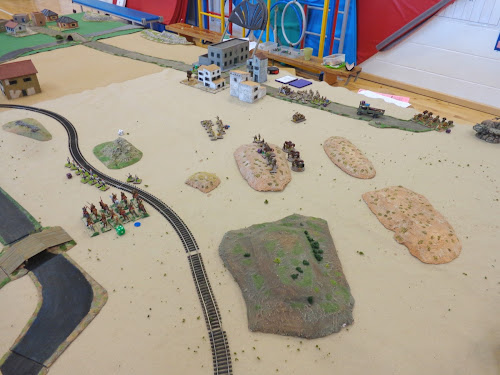 German ships appear on the black Sea coast and duel with an Andrevian armoured train causing problems for the Arabs. 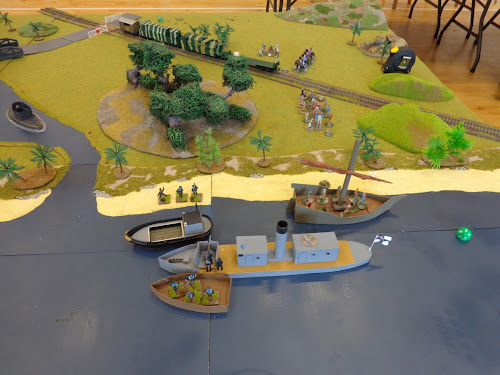 A submarine appears to be stuck up river! 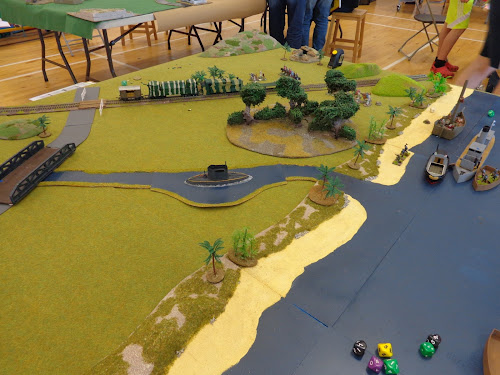 Wossterforce reforming for the night in a small Andrevian town. The local Andrevian commander is invited to breakfast with Brigdier Betram Wooster by his batman Jeeves, while a message is awaited from the capital allowing Woosterforce to continue (Of course it would have done so, whatever the result, but it's always better to keep the locals quiet) The Andrevians were introduced to the delights of kedgeree, which is now known locally as "Wooster-rice" 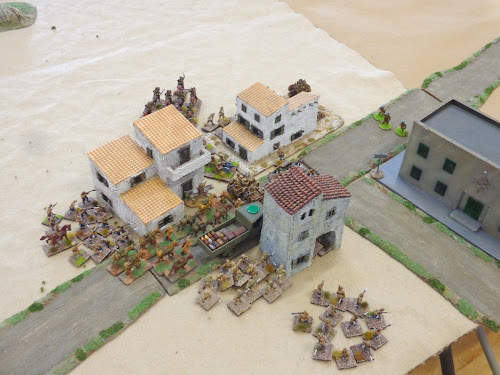 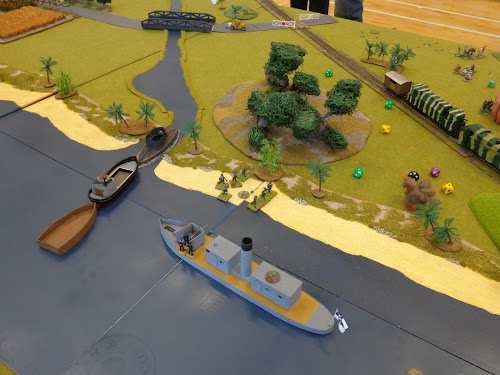 With the morning a large force of Turks arrived to the rear of Woosterforce, necessitating a rapid redeployment, Fortunately the Turkish Armoured car strayed into the line of sight of the Indian screw gun. the first hit stunned the crew and the second penetrated and destroyed the vehicle. 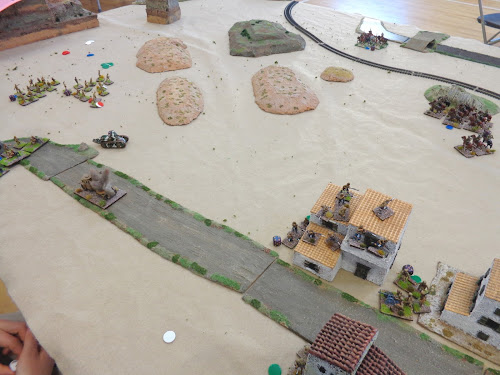 The patrol cars found themselves magnets for enemy fire, one (pictured) was taken out by a Turkish field gun and the other was hit by an Arab mortar. The later had fired a strange gas shell, which induced panic and the patrol car routed off the table. 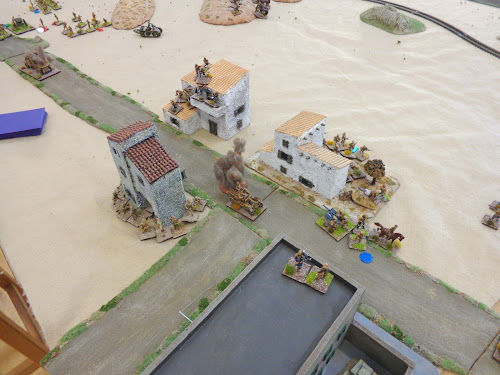 .
By the end of Sunday Woosterforce was well on the way to defeating the Turks and clearing the road to Tchebevan, but the action had been too hectic to keep track of what was happening on the other tables.

Not the best of figures, these are the two set of mounted French Musketeers from Mars. I mixed the contents of both sets to give two units, on the left the King's Musketeers and on the right the Cardinal's.

There are two personalty figures. Cardinal Richelieu is obvious, the other is just a generic 3/4 armoured officer. The Cardinal had a strange hole in his back, which may have been intended for a plug-in cloak. I modelled one on using blu-tack and superglue to harden it. 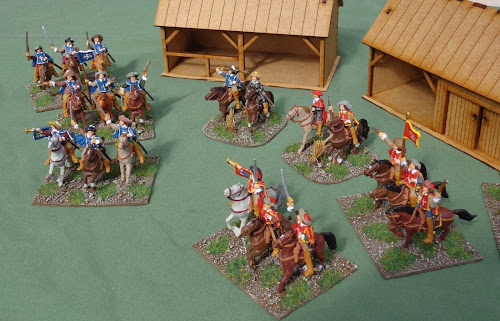 In the background are some Russian buildings I am working on.
Posted by Fire at Will at 07:40 3 comments:

At last some progress, these are the Plastic Soldier Company version kitted out for the desert, The only major modification was reducing the size of the offside sand-shield as they were asymmetrical. 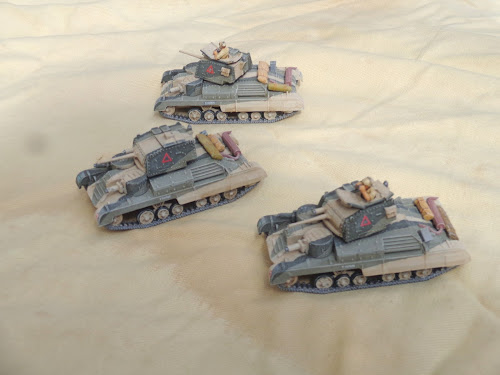 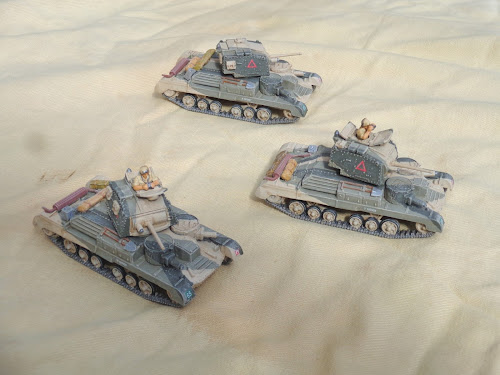 A rather pathetic start to the year with only 267 items painted in the first quarter and a lot of half finished items on the workbench. So this month I need to finish off all the bits and then get started on the big project of rebasing my Thirty Years war figures. I'm also off to play at Crisis Point in Sheffield next weekend. Here's the status: