A mixed collection this time. The cypress trees will just be scattered around the board to add colour. The olive trees (centre) will be used to provide another couple of fields to contrast with the oranges. Finally a quartet of tree to provide a small area of scrubwood.

For those interested in how I made the olive trees, here's the basic steps
Heather twigs cut to size; rubberised horsehair stuck on with contact adhesive; painted with PVA and rolled in sawdust coloured a light green/grey. Finally sprayed with hair spray to fix in place.

Apologies, I had to post this having used my children's old Thomas the tank engine set for the track. Now rebased and ready for use in another context. 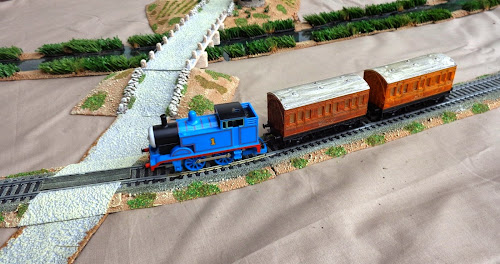 Thomas, "Oh dear, I don't think we are in Sodor any more!"
Annie "Don't be silly"
Claribel "You mean Sicily!"

The Syracusa to Catania railway line now runs past Lentini.

Completed one of the major features for the big game, the Ponte dei Malati, which was taken by 3 Commando. The pillbox had stood out a bit too much so I added a camo net. 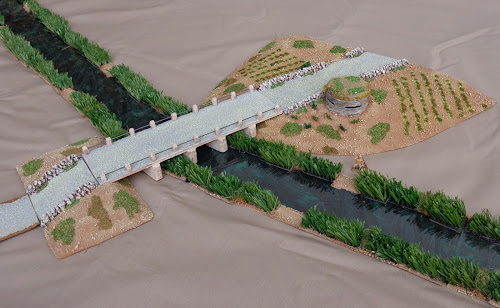 While working on the roads the post-its I was using to identify where the components should go fell off so there was no alternative but to lay out the terrain yet again on the patio and use the opportunity to check how well everything fits together. 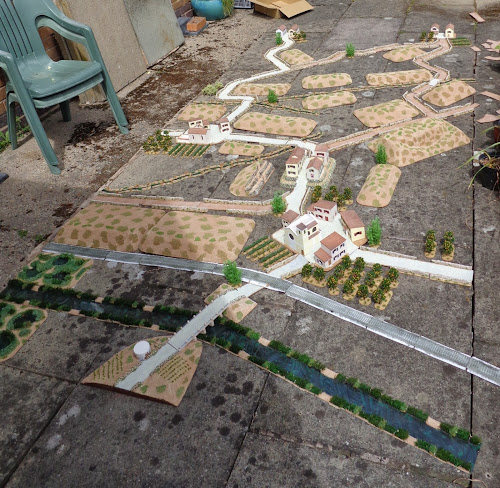 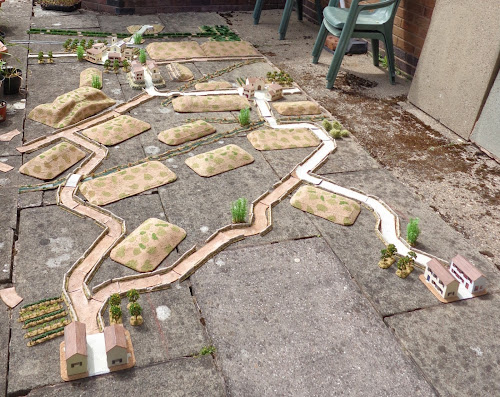 and the overhead view, useful for recording the exact fit 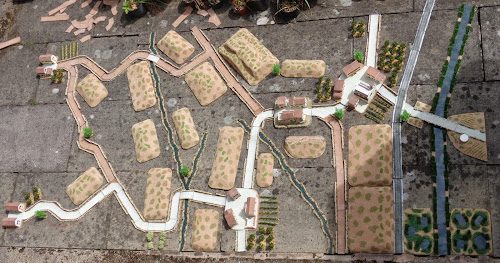 All the roads and tracks are now numbered and I've drawn up a plan to speed up laying out the terrain at the big game.

Getting back in the swing of things, although these marshes are intended for the big game (Sicily 1943) I thought I'd make them a bit more generic and suitable for actions anywhere in a warm climate and something like a watering hole. 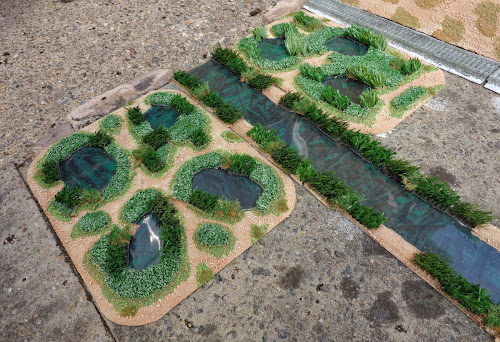 All the tall vegetation is a variety of artificial grass.
Posted by Fire at Will at 06:22 1 comment:

I'm always looking out for anything military while on holiday and yet again I found another part of the Cardona Line, which was built across northern Italy in 1915-18 as insurance against a German invasion through Switzerland! Here it was running west from Lake Maggiore blocking the Ossola valley.

A barracks nearly hidden by vegetation. 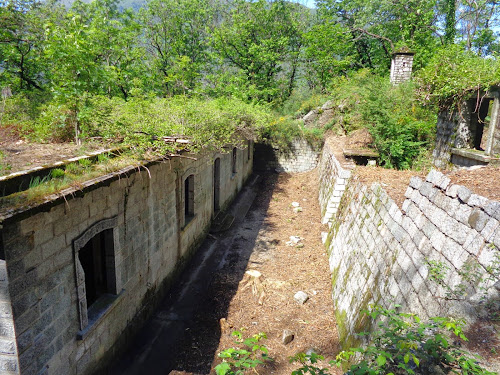 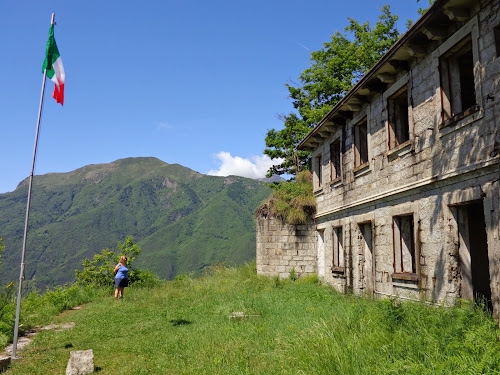 An information board giving some details 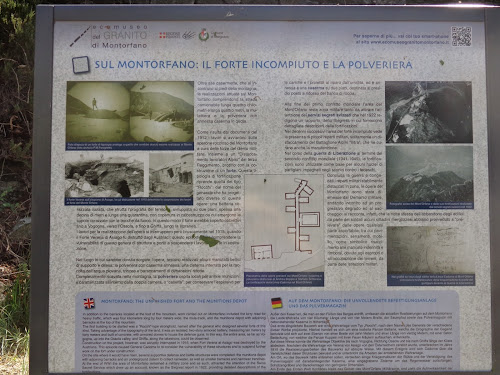 Evidence of another conflict of which I know very little, a memorial to the the short lived partisan republic in 1944, they also made use of the fortifications. 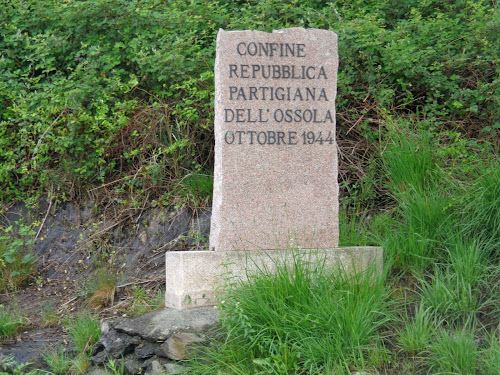 Normal service will resume now I'm back from holiday. June is going to be a busy month with both the Operation Husky big game and the Phalanx show. The biggest heap on the workbench is still terrain for the big game, but the end is in sight. other bits still sitting around are 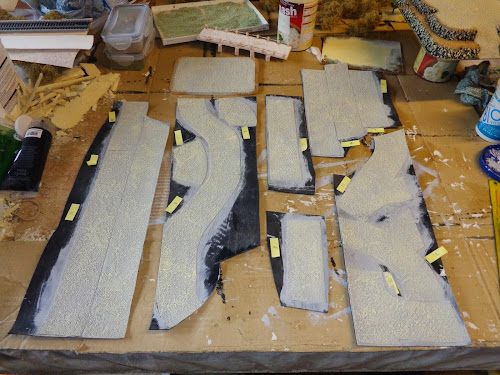 The railway is no so far advanced the I've used the Hornby track foam glued to hardboard. It'll be painted before replacing the tracks. One piece will be a level crossing. 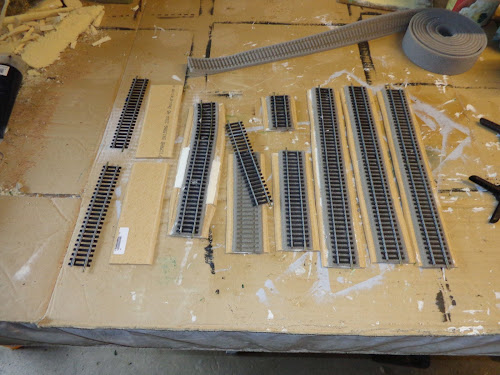 First, progress on the Ponte Malati 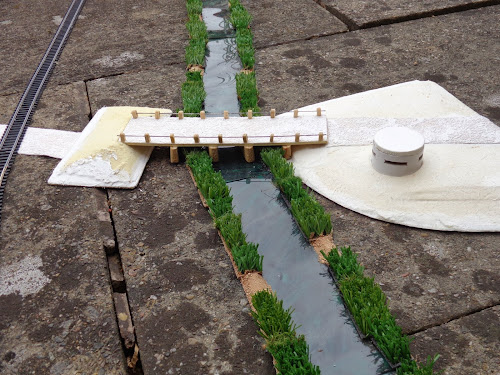 Although I used dirt roads in the earlier pictures (and they are a useful fallback if I run out of time) I decided to work on something more substantial for the N114 road consistent with the village bases. 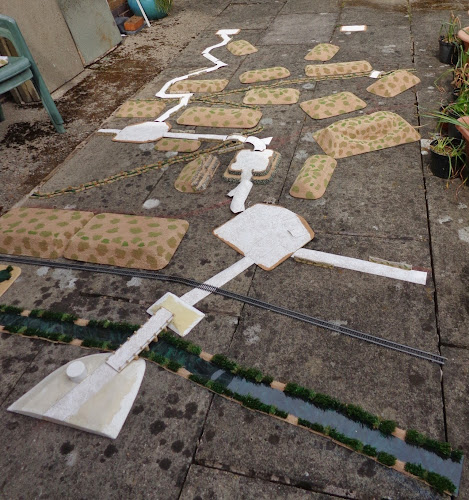 All cut from "cobbled" wallpaper and will be based on the same left over rubber roofing I used for my other roads. 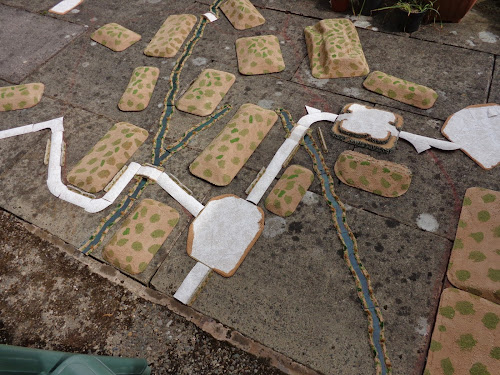 The finished streams can be clearly seen in this picture 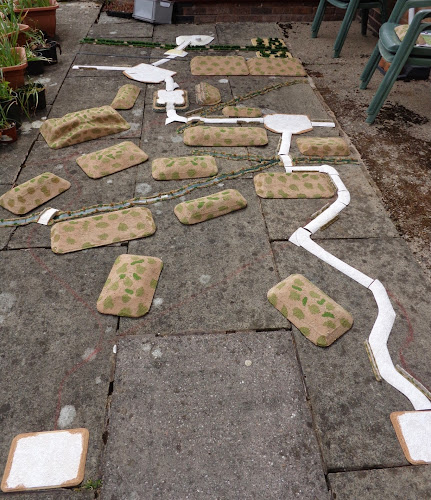 The view from above, I've started work on the marshes around the Lentini river (bottom right) 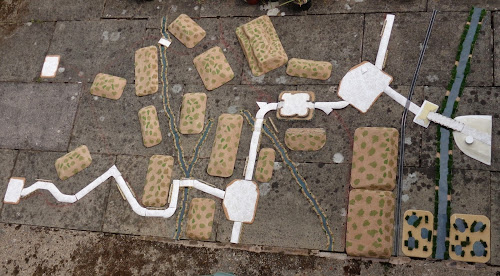 Now I've completed the river I've started work on the bridge over the Lentini,the "Ponte Malati" 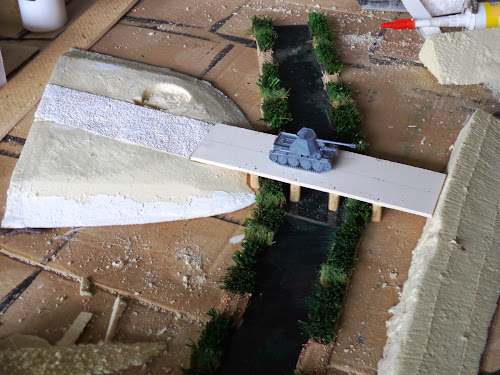 On the north (left) bank there is a cut-out ready for a pill box. To give an idea of scale I've added a PSC Marder III
Posted by Fire at Will at 11:33 2 comments: