I've just got back from a week dinghy sailing in Turkey. It was near Bodrum so I took the time to visit the town which was the ancient city of Helicarnassus.

The remains of the tomb of Mausolos, one of the ancient wonders of the world was not much to look at, as virtually nothing is left standing. Some of the best bits apparently are in the British Museum, but most of it was demolished for repairs to the castle

The main delight was the large castle of St Peter, which also contains the museum of underwater archeology. It was a major fortress during the Crusades and was held by the Knights of St John and only given up after the fall of Rhodes. It's strength was such that the Ottomans never directly beseiged it. It was also bombarded by the French in 1915 as part of an abortive landing attempt. It was restored in the 1960s.

Kos was only 4km away, just looking like an enormous ridge rising out of the water and made me think about it's involvement in the ill-fated Dodecanese campaign in 1943.

It was back to Delft for the first time in many years, it was still a friendly show as it always was. The current venue is smaller than the old one and the lighting was not very good so only a couple of pictures. I used to go when I worked in Rotterdam and the date didn't clash with Phalanx. This time I popped into my old office on the Friday and then stayed in Delft for the rest of the weekend.

The pirates game by TSOA (I think) 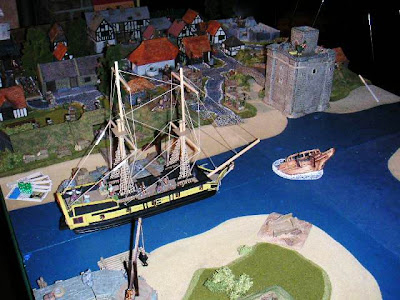 Below the map board used for the Somme 1916 game. As the British I made a credible advance all along the line taking the first line of the German trenches. In the second the British broke through on their left partly due to my bad dice rolling as Germans but cut down in droves on their right and fell back to their trenches. It had a good fell for the period and the feeling that "just another push and we'll break through" needed to help you ignore the slaughter. (more details on Jim Wallmans website) 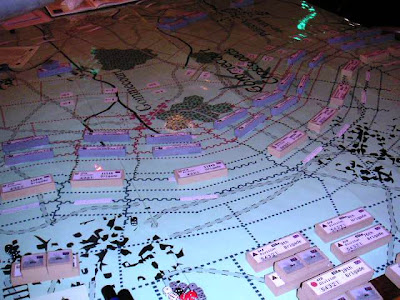 I also played Sargeant Pavlovs dogs (by Wargames Developments) several times and failed which ever side I played, not help when I played Russian when a KV1 accidently left the table to avoid the dogs and the crew were executed by the NKVD.

At the end of the day about 40 of us finished up in the local Chinese and afterwards the British contingent then retired to the Locus Publicus for a last drink or two...

On Sunday it was back to the old venue for tthe Megagame Operation Sorcher" the German invasion of Crete 1941. I didn't have enough time to play as I had to get back to the airport so I watched the openning move and then headed off to the Legermuseum (Army Museum) in the old Dutch East India Company building for a quick tour before getting the train.

A quick distraction from the Visigoths. I was given this church by someone at the club, since I was more likely to use it than he was. I have painted up for Normandy 1944 on the basis that it's limestone country and therefore the stone would be similar to those I know in North Somerset. 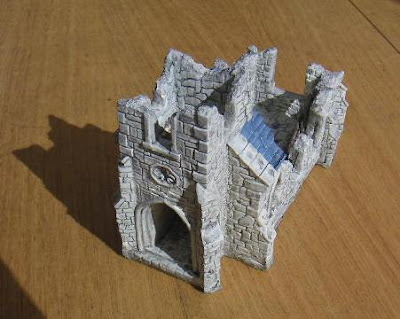 The roof should strictly be stone shingles, but over time a lot have been replaced by slates and thats what's on this model. 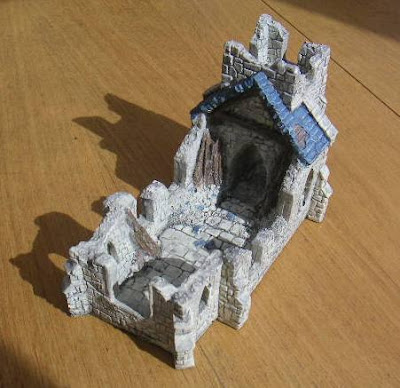 I haven't decided yet whether to base it

On the workbench (May)

Yes, another month and time to move on with my painting, etc. I made a new years resolution to reduce the number of figures in my stash (either by painting or passing on/selling) and also to complete the 15mm Visigoth army I bought years ago. (my older daughter was supposed to have painted it but that's a long story)

So in progress/planned for may

That's probably enough, given I'm off to Delft for Murphy Mania for the weekend and going sailing for a week.

I did consider working on my TYW lobsters using Tumbling dice figures but they look too large compared to the rest of the Revell figures so I will have to rethink my options with these.

Finished at the same time as the Thracians. I intend to use these for various turn of the century conflicts C19/C20, so depending on the exact scenario they could become anything from Bedouins through Afghans to tribal levies in the back of beyond/Russian Civil War. 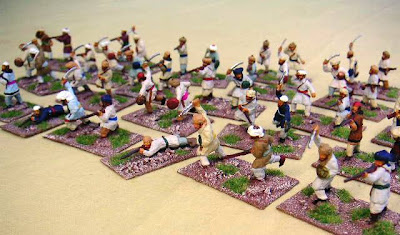 The figures are all from the Red Box Afghan set.

At long last they're finished, for some reason irregulars always take longer in more painting time and elapsed time compared to regulars. I think I just run out of steam alternating colours, etc. 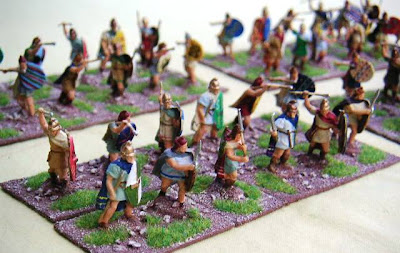 I needed them as my existing old Peltasts only had Javelins and the Alexandrian Macedonian list said I could arm up to half of each unit with 2HCW. And they are nice figures 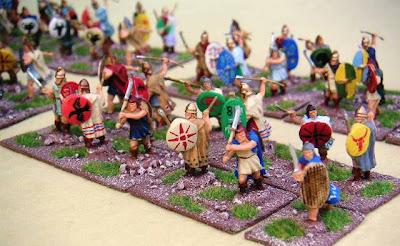 The shield designs are a mixture of hand painted and some old left over transfers (only in black) from my Greek hoplite army.