Well I made a fine impression on my February list with only the Celtic command units still to do.  A change of emphasis this month with the focus on preparing for the big games in June/July therefore.
Finally at the end of the month I'll get to go to Salute, the first time for many years (10?)
Posted by Fire at Will at 08:05 1 comment:

Now for something more obscure, after the 3rd partition of Poland various Poles found their way into the service of French Republic and then its Italian offshoot the Cisapline Republic. Details of the uniforms can be found on Histofig (link) look under the "les Troupes des republicques Italiannes 1796-1805 and work though the options (direct link). I had a packet of the Waterloo Polish Infantry spare as the poses were no suitable for my main Napoleonic armies and I decided that this was the obvious way to use them. However it appears that they did not fight in 1800 in Italy but were still reforming in France and then in garrison at Modena(?) However another legion did operate in the Danube theatre.

In the picture the Poles are front centre and rear right. flanking them are some additional French infantry using the Italeri 1798-1805 French Infantry. I had earlier used some of these to provides some Gendarmes a pied for Napoleonic skirmish games (link).

Given the performance of my French generals over the last few games I have decided to add a Polish general to my army.
Posted by Fire at Will at 20:46 No comments:

Rather than the usual biweekly boardgaming I popped down to Crewe to the military modelling show there called South Cheshire Militaire.  I hadn't been for quite a number of years ten perhaps and the show is now certainly a lot bigger than it was with every scrap of space being used so it was probably as large a show as Phalanx, but no wargames.  Of course being military modelling it is dominated by 1/35 scale , but there was a number of interesting small scale items on display.  I picked a few bits a couple of 37mm armed Panzer IIIs, a Revell CR42 Falco (East Africa WW2 again!) and a Lindberg Landing Ship Infantry, which turns out to be 1/160 scale so I think it will be back on sale soon (Although that is around 10mm I expect it could be used for 15mm games).
One thing that really amazed me was the quantities of old aircraft kits on sale and I almost got tempted by an old Airfix Ju88 for the SOTCW game at Gauntlet this year.  The other was the low prices for quite reasonable 20mm tanks on the B&B.
Posted by Fire at Will at 11:23 4 comments:

I had been hunting for the revised Italeri Austrian figures for my 1800 Austria forces, as they solely contained Austrians and in addition some Grenadiers, but with no luck. However I did get sufficient of the earlier figures to provide the line units (previous post). I had decided to use my existing Napoleonic Austrian Grenadiers by building a base they could slot into. My Napoleonic Infantry are based in 6's on a 40 x 25 base and my standard base size for most other periods including this one is 45 x 45.

On further reflection I decided that as I still had sufficient of my old Springwood Austrian Grenadier figures left I would paint up these instead.

Combined with my one existing battalion I now have enough Grenadiers for the Marengo scenarios from Wargames Illustrated.

In addition I have also added more of my fictitious Frundsberg Frei Stadt troops to the army as they used the Prussian figures that came with the Austrians (picture on the Frundsberg blog)
Posted by Fire at Will at 16:15 No comments:

A while ago I obtained some Revell SYW Austrian officers that seemed suitable enough with their long coats to provide generals for my WSS Imperial forces. 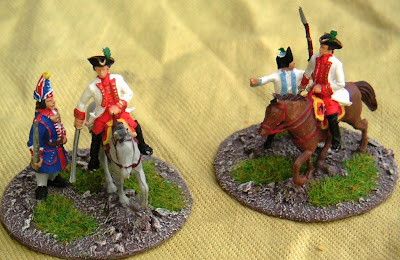 Rather than have single figures I added an extra foot figure to each to provide more interest. They are a another Revell Austrian figure and one of the Orion figures from their Great Northern War Swedes pack.
Posted by Fire at Will at 16:08 2 comments:

To provide a bit of interest to my Russian reconnaissance troops I have added a couple of Ford GPA Sea Jeeps (Seeps), although supposed to operate in the same conditions as the DUKW the free board was too low for any maritime conditions above a dead calm. However it worked well on inland waterways and via Lend Lease became popular with the Russian armed forces.

The models are from Ready to Roll (again with moulded on bases) with a few cut down plastic figures as crew.
Posted by Fire at Will at 15:15 No comments:

Something more unusual, the Lancia IZM is a WW1 Italian armoured car that saw service through into WW2 (a bit like the Britis Rolls-Royce Armoured cars) I've painted it up for use with my Italian forces to fight in Ethiopia. 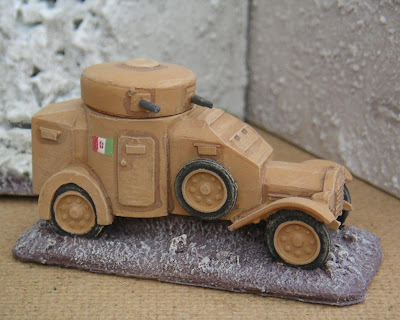 The model is from Ready to Roll, and includes a moulded on base, not what I would have liked but I couldn't face the task of sanding it off and since macadamed roads are rare it shouldn't look to out of place.

An intersting French site showing the IZM in Rhodes and elsewhere up to 1943
Posted by Fire at Will at 14:58 1 comment:

The first pair of mortars are the US 4.2" and will form part of one Chemical Weapons company for the Achse & Avalanche game at Gauntlet this summer.  I still need to add an OP team to make a complete company, and I did wonder whether to add a supply detachment with a hand cart. An excellent set of WW2 figures from Reiver. 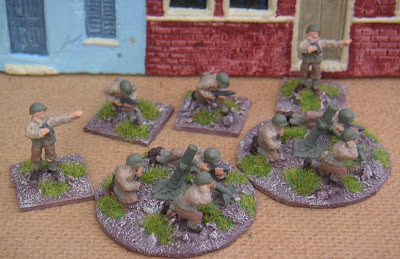 The second mortar is the British 4.2", which I will use with my MG Company, again a nice set of figures from Reiver. 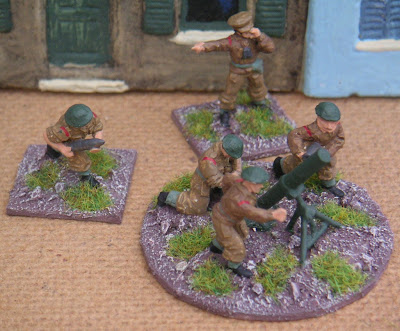 The difference in barrel length is noticable and the reason is that the US version is rifled
Posted by Fire at Will at 19:46 No comments:

Now running a bit behind on the painting because of eating something that disagreed with me. The upside is I got quite a bit of reading done.

I got tempted by the Albatross D III as it was only £1.99 in the Modelzone sale and since I don't have any aircraft for WW1/RCW yet it was an easy decision. 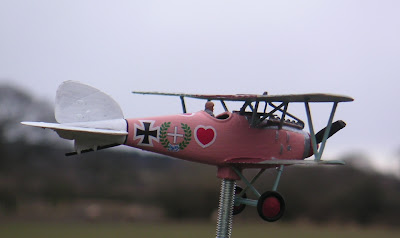 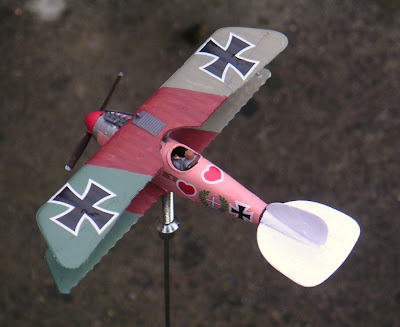 The only problem with the photos is that they have a strong red bias, it's particularly noticeable on the orange fuselage, which has come out Barbie pink!

Back to East Africa WW1

Over the last few weeks I have slowly been rebasing my old wargame figures that I used to refight WW1 actions in East Africa. A while ago I had rebased the Indian unit to use in the Russian Civil War/Back of Beyond actions and I now decided to extend my use of Red Actions to cover this aspect of WW1. The figures are over 20 years old and last saw action in St Albans. The British and Kings African Rifles are both Airfix Gurkhas backed up by the old Airfix WW1 RHA gun. 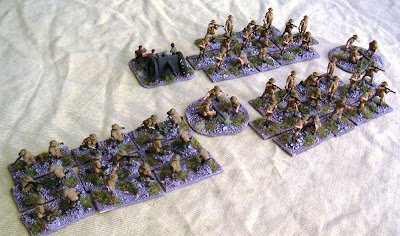 The Germans are Airfix Japanese with a couple of Jacklex officers 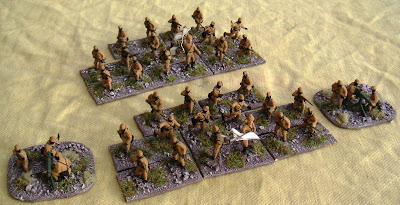 The painting is pretty basic and I decided not to bother with trying to upgrade it. The worst moment was as I was gently tapping the artillery to remove the excess static grass when all three figures broke at the ankles and fell off. They are now super-glued in place and I wonder how long they will last once they get into action?

For the games the rules will be basically be Red Actions, plus some elements of my old rules as hidden movement is quite important in this period.
Posted by Fire at Will at 15:45 3 comments:

This month will be something of a tidying up operation, so quite a mix of stuff planned
Posted by Fire at Will at 12:51 1 comment:

As I mentioned in a previous post, The Guild memers selected Boxers as my Surprise build, so here they are. In the background is a couple of new additions to my modular fort, two breached sections of wall. 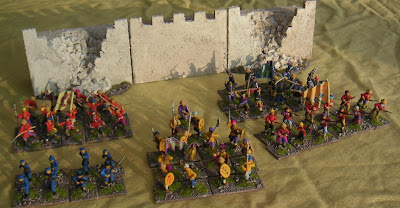 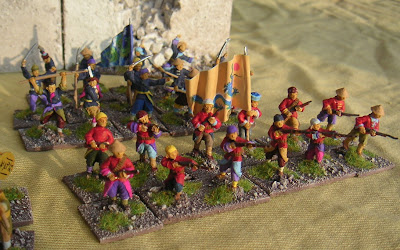 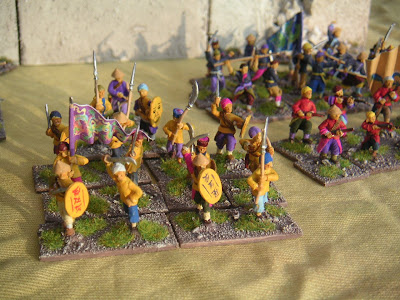 The flags came from Matakishi's Tea House, which has some useful bits on the boxers 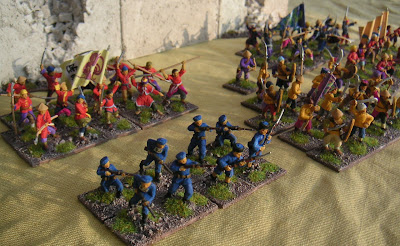 Andrews Wargaming Pages also has some information on the Boxers including some period colour pictures
Posted by Fire at Will at 10:45 No comments:

Had a great day out in York yesterday and managed to get back across the Pennines before the snow. As is often the case I was involved in a demo game with the Lance & Longbow society, this time a Viking v's Picts game using warhammer. There was a slight mix up over the gaming cloth and trees so we ended up rigging up the terrain from what was available.

The vikings (Bob and David) were raiding a pictish village defended by James and myself. Given most of our lack of recent experience with warhammer ancients Steve acting as umpire and rule researcher.

The Vikings on their right successfully stormed across the river and took the village, aided by some bad morale throws by the Picts (they had low morale to start with), meanwhile on the Pictish right the lone unit of naked blue painted fanatics carved their way through all the opposing Vikings. The end came with the Pictish right commanded by James returning to take the Vikings in the flank/rear resulting in them all routing back across the river. 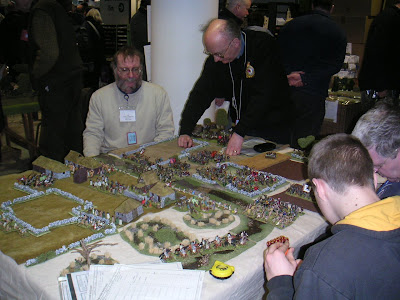 Above shows the position just before the collapse on both sides left flanks. On the right Bob and James on the left Steve and David.

There were quite a few impressive games around, but I never seemed to have enough time to persue them adequately, I'm hoping to get chance to see some of the many photos taken on various people web pages.

It was quiet on the purchasing front. I bought some amphibious jeeps and a Lancia IZM from Colin Rumsford and got a sight of the forthcoming book on the western desert, which was partly used in the big game last year. Next was some 4.2" mortars from Under the Bed/Reiver, one British to add to my MG company and two US to support Derby's rangers in the SOTCW game at Gauntlet. Finally I bought the complete set of Touching History books for £15 and a box of dice (I never seem to have enough for warhammer/FOG, etc).

In addition it was chance to catch up with a lot of contacts, especially with the SOGG guys for a pint and a chat.
Posted by Fire at Will at 10:15 No comments: