Having completed my plan for the month I added in a little extra painting/modelling time to complete an item for "The Guild" short build competition. The theme is fast build kits and it was an opportunity to complete a pair of Pegasus SU152s. 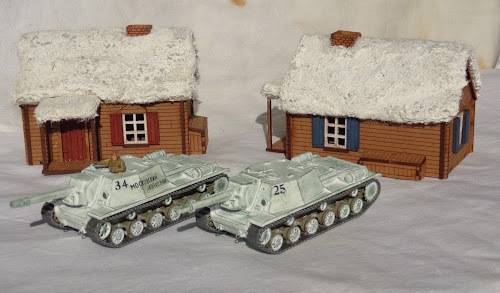 It was also an opportunity to try a different winter camouflage scheme starting with a white base coat and dry-brushing to bring out the wear. I have a number of the Fabbri T34/85s that are pre-painted in white and I wanted to see if this approach would work. 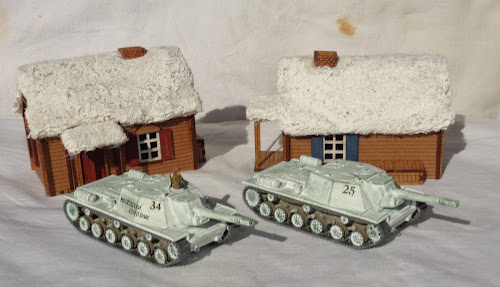 Celts - back in the trays

Finally packed the army back again after its rebasing. With the reduction in base sizes the entire army plus the new figures now fits comfortably in the three trays and is much easier to deploy. 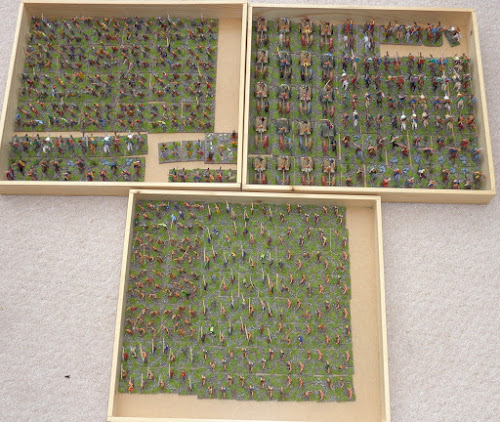 I was puzzled why all the cavalry and Chariots didn't fit in one tray compared to before (below). Then I remembered that I had retrieved more from my dark ages box. 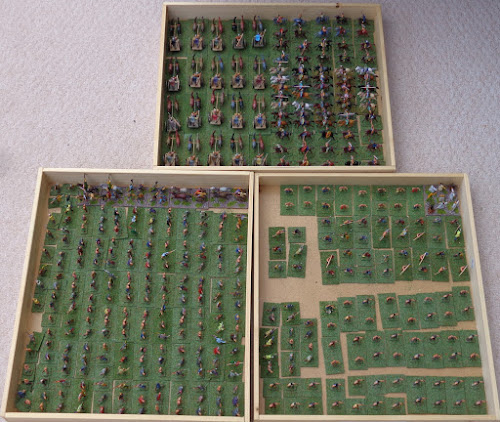 A final review of the army before packing them away. It's been a lot of effort, but it's been worth it 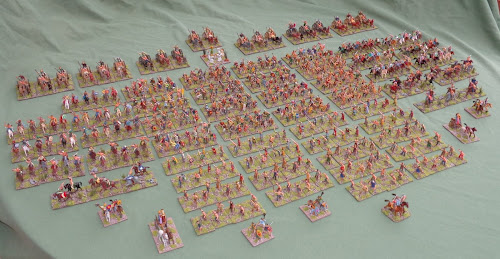 Amazingly only two figures and one horse broke during the whole exercise, which is exeptional given some of the figures must be close to original production. 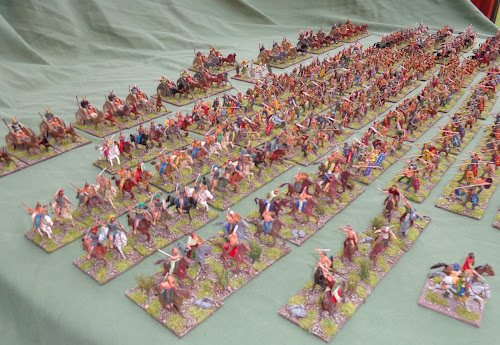 I still intend to add more bits to the army so it can be used for Gaaltians and Gothic. I could even extend it to Dacian! 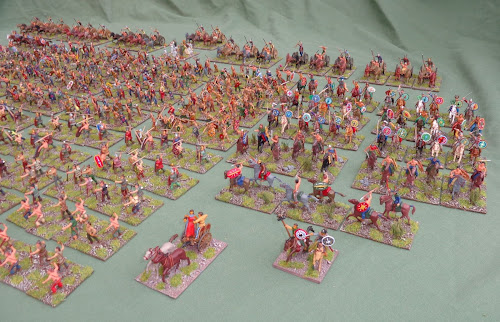 The last of my Celts are completed, hurrah. These are mainly rebased, but there are a few conversion of Airfix slingers, which I have mixed in. Thanks to Garry for the donation. 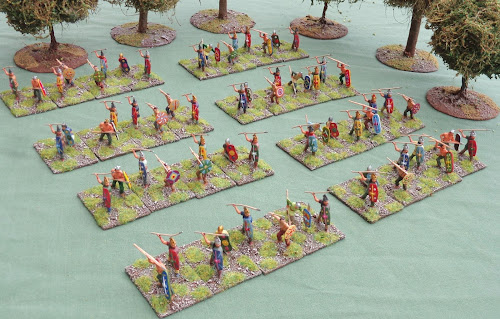 I had originally intended to create 6 units, but while checking the Hail Caesar Germania scenarios I found that for some I would need an extra couple, so lucky that I discovered this before finishing sorting them and the warbands out. 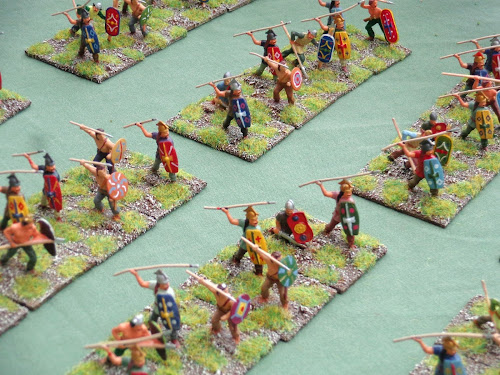 The rest of the warbands

After completing the specifically German warbands I resorted all my old warband figures to try and give a sufficiently random feel to each of the 9 figure bases. This included the newly painted Caesar Celt Warriors (which are very nice) and they are included in the units in the middle rank of the army. 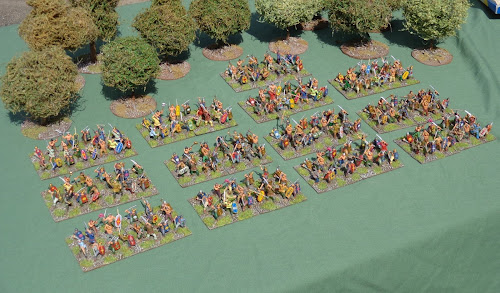 I did debate touching up/improving the old figures, but I decided to leave them as was, with just some repainting to the raised swords, where the paint had vanished over the years 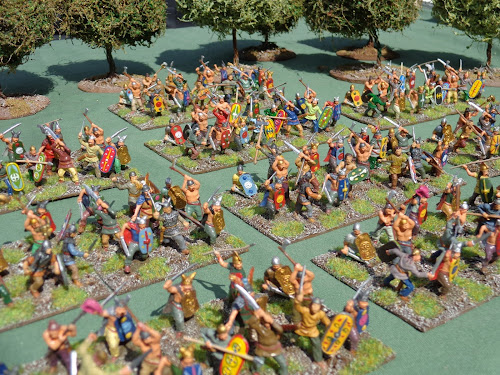 Only one figure broke in the course of the exercise, which pleased me greatly!
Posted by Fire at Will at 20:48 3 comments:

Well that's the term Phil Barker used for Chariot heavy Ancient British armies, so how could I disappoint! The bulk are Airfix Ancient Britons with the wheel replaced with RHA artillery wheels. At the back are two Hat Chariot based commanders that I didn't have to rebase. 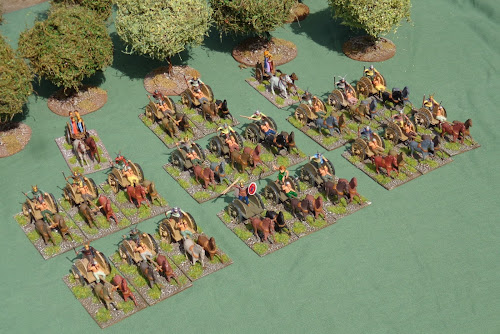 For Hail Caesar they will be used in units of three with 120mm frontage like all standard sized units. The couple of chariots in the centre are a couple of my older conversions. 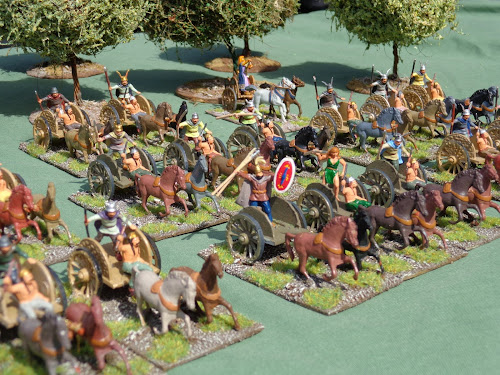 Surprisingly only one horse was broken in the course of rebasing. I reduced the depth by chopping the chariot pole behind the cross bar and then tying it further forward using thin copper wire, thereby reduce to overall depth from 90mm to 70mm, which was consistent with the Hat chariots.
Posted by Fire at Will at 20:33 1 comment:

The slings and arrows of outrageous fortune

Well I've rebased my slingers and archers for my Ancient British/Gallic army. The exact mix will depend on which army I'm playing as the Ancient Britons almost entirely used slingers 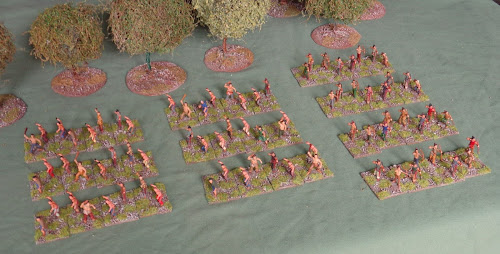 I've mixed up the figures somewhat so each of the original airfix slinger or archer is accompanied by a different figure, either from another set or a conversion. 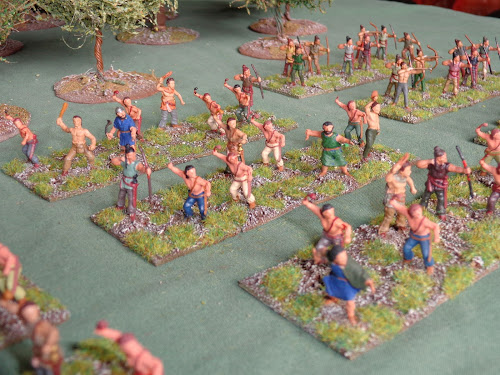 The result is that I still have a number of figures left over. I think I'll mix the remaining archers with some Revell Saxon archers so I can use them as Ostrogoths or Visigoths. I'll need to find some more suitable donor figures for the remaining archers, but I wonder how often I will need to deploy more than 48 slingers (I'm allowed up to 150 under WRG 6th edition)
Posted by Fire at Will at 20:43 No comments:

Don't go down to the woods today

Certainly not if you are Quintilius Varus, who had an unfortunate accident with three legions in Germany

I've just completed my Germanic warbands, which will be used in combination with my existing Celts to make a full army. 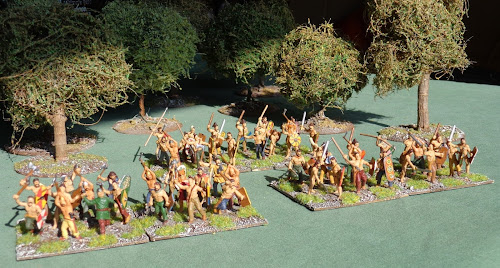 The figures are dominantly Caesar Ancient Germans, with a few other figures mixed in for variety and to make up the numbers, especially in the axe-wielding warband. A lovely set of figures for the period. 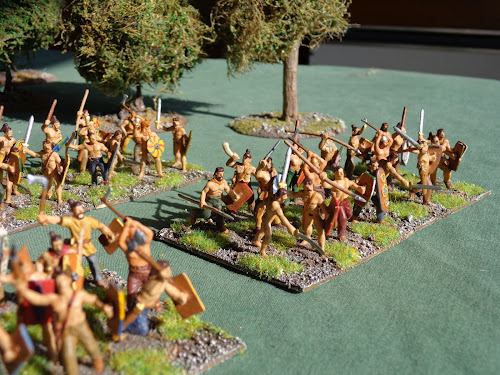 The figures are on my new basing with a 60mm frontage and 60mm depth with nominally 9 figures, so a warband comprises two base of 18 figures on the same frontage as a Roman Cohort of 16 figures in two close order ranks 40mm deep.
Posted by Fire at Will at 19:05 4 comments:

A blast from the past with this post. Many years ago in Airfix magazine there was a series of article on converting ancient figures (by Bob Black?), amongst them was how to create Balearic slingers from the Airfix Robin Hood set. Well here they are, probably at least 50 years on. 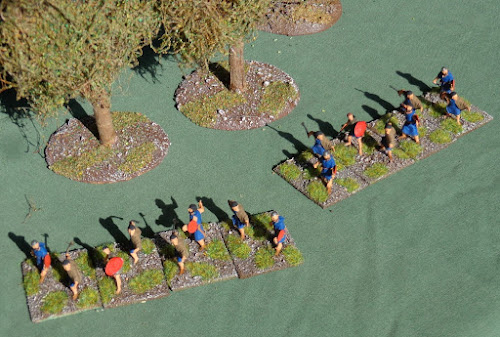 I should have replace the missing slings on a few of them, but I decided not to take the cane of them breaking.

But why rebase? - well I realised I was short of Celtic slingers and that this unit was oversize and the surplus could be used to boost them

I have also reworked a picture of the Celtic light cavalry so that the conversion are more visible for those who are interested in more of the historic conversions. 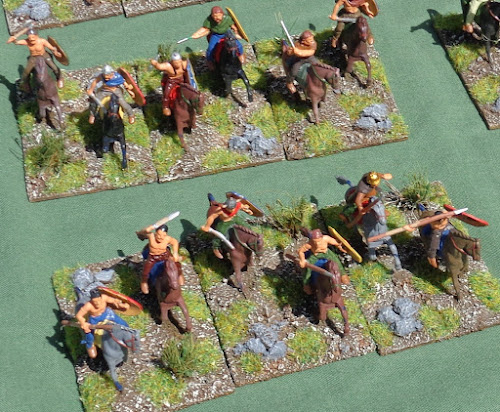 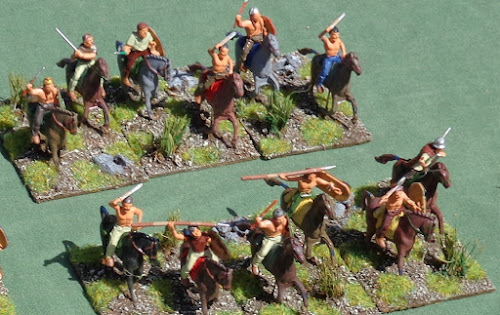 Only a quick post to record my trip up to Manchester on Saturday to attend Britcon. The Lance & Longbow Society put on the battle of Bauge 1421, the same battle as we fought at RAGE in Leeds earlier this year. We managed a couple of game on the day, both marginal English wins. My first move as the impetuous Duke of Clarence was a classic. The Scots archers woke up, fired a volley, managed four hits (enough to remove one knight) then rolled a double one to kill Clarence!! David my opponent consistently rolls low, hence his nickname "Low Roller", but he rolled high for the hits, and then low to get the killing shot.

So only one picture for the day, the double one 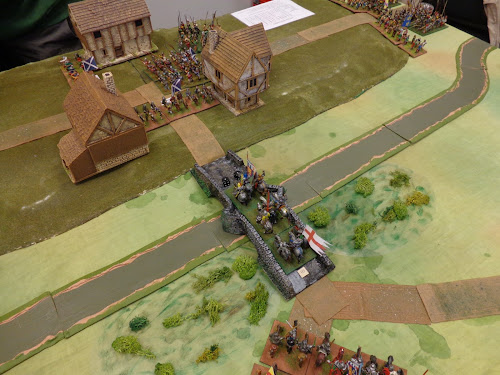 Typically I sold very little on the B&B and spent more by buying the Italeri British and French HYW sets, after all I don't have a Henry V or La Pucelle figure yet!. I also bought a cheap Italeri Persian Cavalry set to try converting the chariot into a Galatian version to go with my Celts

A couple more pictures can be found on David's blog 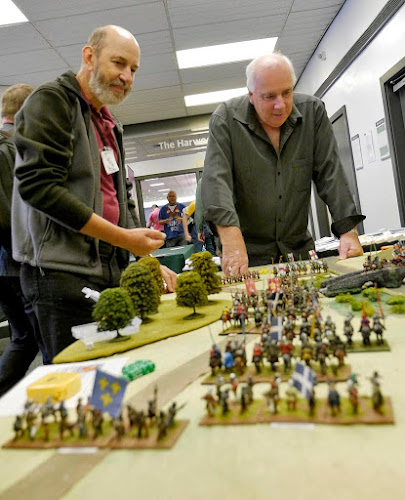 Phew, just finished rebasing the cavalry for my Ancient British/Gallic army. They certainly show the gradual evolution of the army from it's origins over 40 years ago.

The light cavalry is the oldest and is made up of various conversion by adding Airfix ancient/medieval torsos to US cavalry legs and horses, then over the years a few more variations were added. 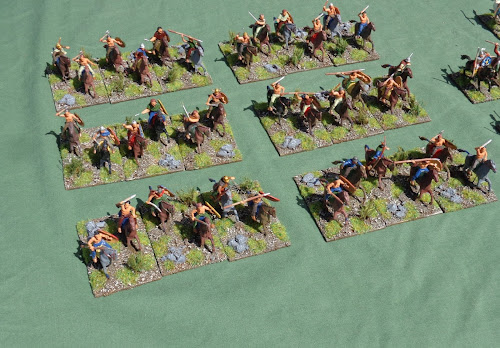 Extra units were added when figures became available, the noble heavy cavalry on the right started out as Italeri Roman Republican cavalry. Those on the left are the armoured figures from from Hat Celtic Cavalry 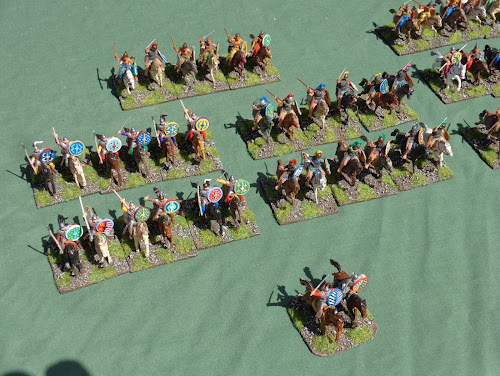 The Gallic medium cavalry are a mix of all the above plus the Italeri Celtic Cavalry. 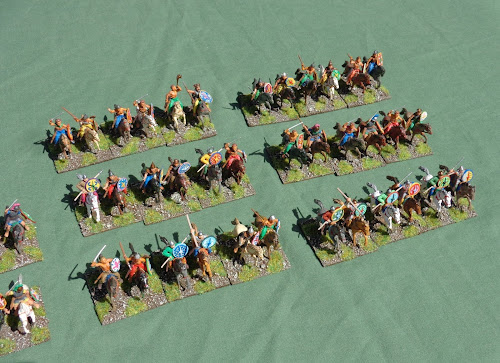 I've taken a few days to get back into painting/modelling mode and I'm feeling a bit intimidated by the scale of the task I've set myself for this month. To start it sounded simple, painting some Gallic/German warbands about 72 figures. Then add in the rebasing of the existing Ancient British/Gallic collection of over 500 figures, phew! To make the army capable of representing Germanic tribes only I need to add a unit of axemen, but I'd also like to give the slingers and archers a bit more variety.

Only one event this month, which is a quick trip over to Britcon, so no distractions from the big job ahead!