Overall I made good progress last month, given that a major DIY project has intervened. This will continue through February so I expect progress will be somewhat slow, but I do need some relaxation. So my plan is

Plus whatever I pick up at Vapanartak on Sunday, hopefully I can pickup the Orion Cossacks so they'll be stright onto the painting table.

I had been needing one more Churchill to "complete" my collection and I was planning to buy one of the Resin ones from Frontline who I have used for a lot of my WW2 vehicles that are not available as 1/76 plastic kits. However I found that Modelzone were having a sale and selling the Revell (Matchbox) Churchill AVRE for £1-99. I was already using some of these as basic AVREs without the bridge and using some old spare gun turrets for when I needed them as part of my Churchill squadron. However I had run out of spare turrets, but some research turned up the fact that the Churchills that were used in North Africa with the 6pdr gun and upgraded to 75mm were the Mark IV version, which was the same model used for the AVRE.
. 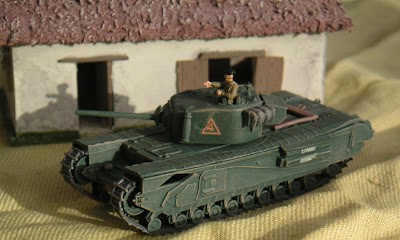 So a nice simple conversion job, just adding the gun and mantlet from a leftover Airfix Sherman, plus carving off the bridge mountings from the lowere hull and it's done. The commander came from a Fujimi Valentine.

Once in a while a plastic figure set is produced that really sets a standard that is hard to beat. Zvesda has done it repeatedly with their artillery sets and their Medieval Field Powder Artillery is no exception. It's a superb set providing (from L to R) a Ribaudquin, a Serpentine and a Veuglaire. Plus a very nice looking limber, but I'm quite suspicious of this as I thought harnessing in tandem only became common in the middle C18. 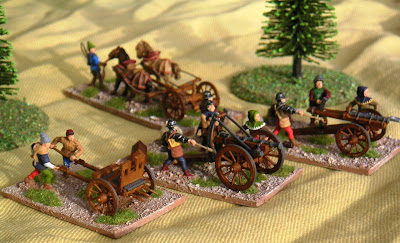 I've based the guns for use in 6th edition, luckily they all fitted well on a 40mm wide frontage, and I just picked a suitable depth to fit. I can see some fun games ahead with this lot, especially if Zvesda bring out more HYW figures, as I'm already tempted by the French Infantry, which has a good selection of proper infantry poses, not dominated by dismounted knights (It's not been reviewed on PSR yet)

Well they're finished and they look pretty intimidating. I wonder if their opponents will think this? Sixty cataphracts are the maximum allowed in the WRG 6th lists so given it was either 45 or 60 (3 or 4 packets) I went for 60. ig needed I can add more either Armenian or Selucids but neither of very good quality. 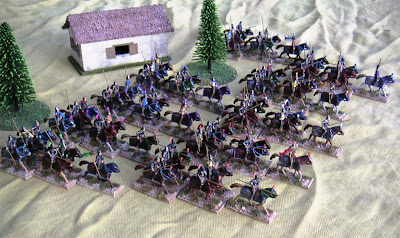 The figures are all HaT and although the detail was not raised as much as I would have liked the armour dry brushed OK. The lances are all florists wire, which is far better than the very flexible ones provided. I just wish Hat would go back to its original instead of this very soft, supposedly glueable plastic. All the lances and figures/horses were welded together to ensure no "breakages" once painted. 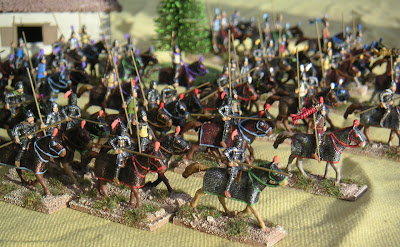 Yes, I've been caught up with DIY so progress on figures, etc has been slow. However my sixty (60) Parthian Cataphracts are coming on nicely, if slowly, and on the side the medieval field artillery, so I hope to finish them by the end of the month.

I played the first of the RF Bulge Scenarios a week ago - Foy Notre Dame as German and was surprised to win as I thought I would be overwhelmed, but I managed to use my hidden deployement to the best and the US ability to shoot up friendly british units came in useful. The US air liaison drove around for most of the game out of sight of any possible targets as well.

Last Thursday was a WW2 game trying another set of rules a local D10 based derivative of RF. I took the British and with a platoon of infantry and a troop of churchills I had to take a village occupied by Panzer grenadiers I took the cautious (historical British) approach and was pleased to drive the Germans out with relatively minimal casualties.

Having bought the new Italeri French Infantry 1798-1805 I realised that I could use them for later period Napoleonic Gendarmes a pied. These para-military police kept order in France, the rear areas of the army and especially in Spain fighting the Spanish Guerrillas, which is where this unit will end up in my skirmish games. 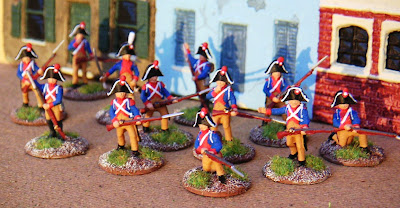 Note the first sunlight for days!
Will
Posted by Fire at Will at 21:12 4 comments:

I have been trying a number of different skirmish rules over the last few years for use with my Napoleonics, but so far I've not found anything that worked the way I want it. I find that most of the rules allow to much flexibility for individual action and this slows down the game overall as well as feeling incorrect for the period.

So I have started drafting my own and gave them a first (solo) play test last night. They worked fairly well, but lots of details need to be tightened up before I

The narrative of the play test can be found on my Frundsberg blog as I used the test as part of a solo campaign I'm fighting (slowly).

Quite a number of posts ago I added some Italian artillery pieces. I have now painted the crews (more BP Casts) and based them up. The gun crews are pretty poor castings by modern standards and the pith helmets look more like bush hats with a thick brim. 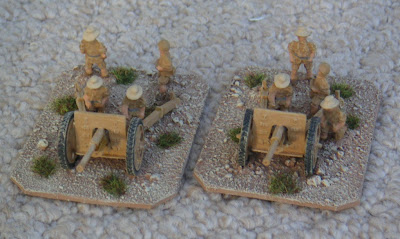 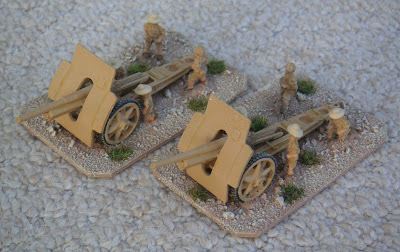 Two of these were in a towed position and I've assumed that they could be fired from their towing position. 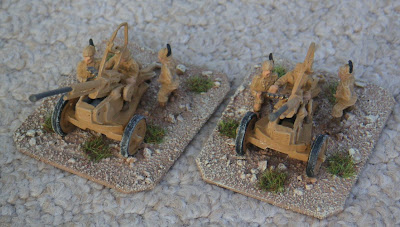 There was only one deployed version and I found that it was damaged (a broken gun and missing the main outrigger so I had to scratch build another one) and the crew seemed rather strange, the two standing crewmen were similar to Italian paras and the seated figure was a German (so he had his helmet and belts sanded down to look like an Italian) 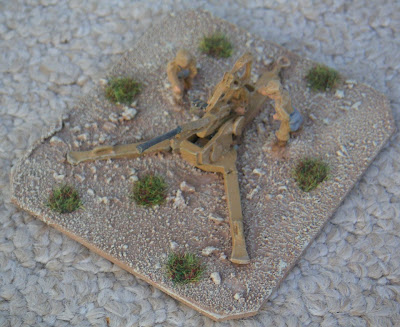 Lastly, one of the BP casts RSOs I bought had a towed quad flak, so given I already have some in my early and late period German armies I decided to paint it up as one used in North Africa. All of these seem rather oversized, but I need to get something to make an accurate comparison. 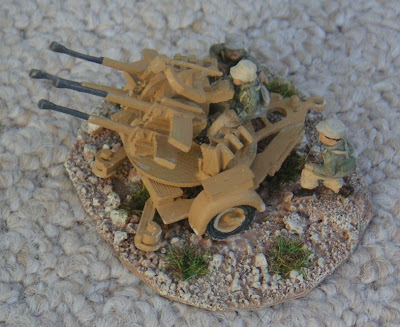 On the basing I was trying a slightly different basic paint colour as the chocolate brown I have been using is a bit too dark for the desert, so I tried a coffee shade with added white. I'm quite pleased with the effect and the odd grass spots look OK.

Just off the blocks, some more of the BP casts.

Firstly a Russian 100mm AT gun, normally I don't bother with adding any camouflage nets to my guns, etc, but this model was missing a couple of the wheels. I managed to find a reasonable close match, but the netting hides the differences in tread patterns. 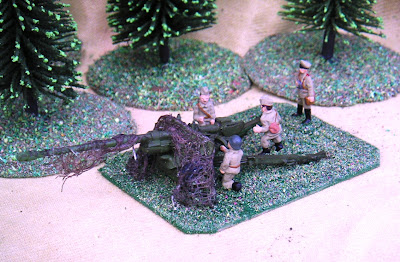 Secondly a German 150mm Infantry Gun, for those times when a 75mm IG just won't do. It came in the same pack as one of the RSO's 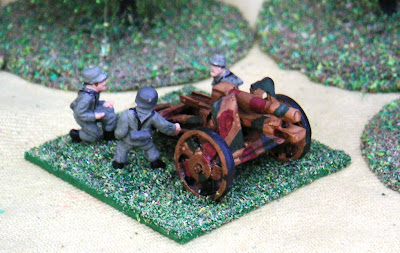 Lastly for Steve, another picture of the Indian pattern carrier Mk2, the close-up shows the roughness of the casting 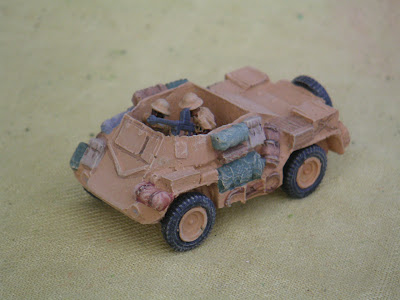 Progress has been a bit disrupted by family commitments and now it's time for DIY so future progress will be a bit eratic.

Here's what's been completed so far with the BP Casts, I've had to use flash, which is not as effective as natural light, starting from the bottom left moving clockwise:

Well it's time to look back and see what I have achieved over the last year.

20mm split by type:
By period

There were also 124 Visigoths in 15mm. Interesting that I worked on virtually all the main periods, except for the SYW/AWI, quite a surprise really that this was the only period I missed.

Not a huge list, but a lot of work this month as I'm aiming to get all the BP Casts vehicles, guns and crews finished and they do need some tidying up. Then there is the unit of Gendarmes d'Espagne for Napoleonic skirmishes, the Zvesda medieval field artillery (too good to leave to one side) and finally getting started on the Parthians.