They've been drifting along for a while with the odd figure or colour being painted when I remember, but finally here's the completed collection. All the figures come from Strelets Medieval Britain set. 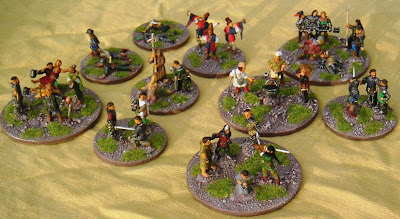 Foreground someone being knighted and the heralds, behind a rather menacing cowled monk and a relaxed group of Men at Arms. 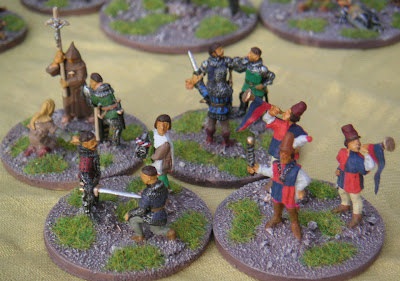 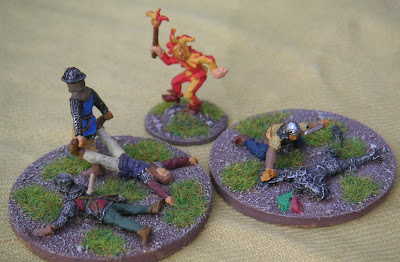 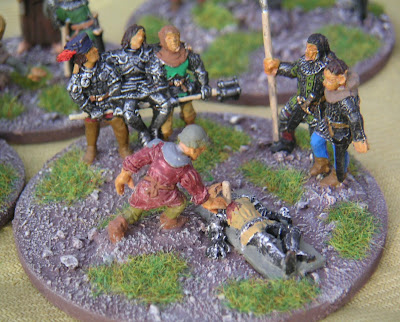 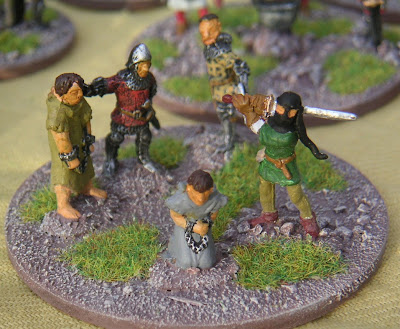 A great collection and will brighten up the rear areas of my armies.
Will
Posted by Fire at Will at 13:25 4 comments:

It's been a while since I produced any Napoleonics, so once I received a few Hat Prussian Dragoons (I still need more) I painted these two units, both Silesian Landwehr Cavalry. The one to the left the 3rd Regiment, unusual in having a polish lancer uniform, presumably from captured stocks. The other is the 2nd Regiment in a fairly orthodox uniform.

For the 3rd I used the Esci Polish Lancers and the 2nd used the Hat Prussian Dragoons. Both units along with the 1st Silesian were in the same brigade at Waterloo, but during 1813 they were individually attached to infantry brigades in the army of Silesia. 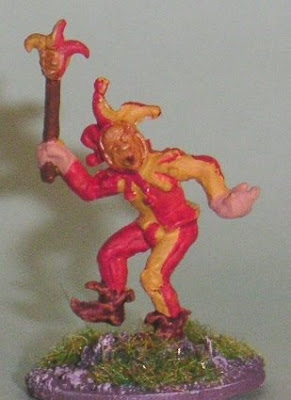 Just in case I don't manage to update the blog with my latest figures before tomorrow's club meeting here's a taster.

A great day out to the Fiasco show in Leeds on Sunday. I was with the Lance & Longbow Society again and the game this time was Marignano 1515. The third replay I've been involved in and in this one the Swiss gave their best performance. I played French and I consistently rolled low pip dice for the two forward commands until later in the game when the pattern changed. The picture below shows the intact Swiss columns about to cross the ditch. 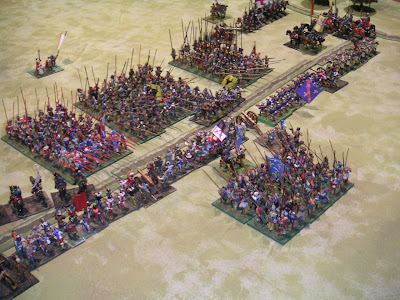 The show was smaller than before with everything confined to the main hall. There were some other interesting games, but I didn't manage to take any other photos since the battery on my camera was playing up. Hopefully one of the many friends I met will post some and I'll then add a link.

The high point was returning home with more money than I started as I managed to sell most of a large box of old/spare figures, and the new figures I would have bought were not available yet.

I've now repainted the rest of the old Airfix bowmen, this time from the Sheriff of Nottingham set. I started with 30 figures, but lost 2 due to the dreaded brittle plastic disease. I'll normally be using them as Light Heavy Infantry, and the smaller unit may well be used with the Teutonic Order hence the simple white surcoat and red cross. The other unit was given a Strelets standard bearer and after some hunting through old Hobilars I found the flag for Sir John Fastoff. 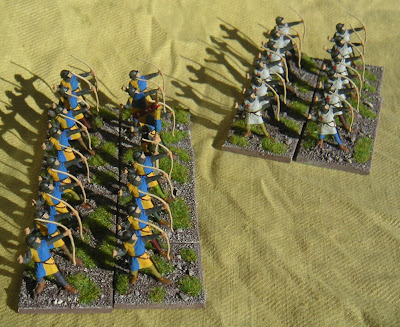 Makes quite a nice change to see my old figures repainted, but the problem is the size of the stash, so do I repaint/rebase units or paint new?
Anyway, now on to a variety of cavalry units, while I finish the Medieval Britain set
Will
Posted by Fire at Will at 16:46 1 comment:

A touch of "something old, something new" this time. I have repainted some very old Airfix "Robin Hood" bowmen, adding in some more I acquired over the years plus a few Strelets figures I got for Xmas. 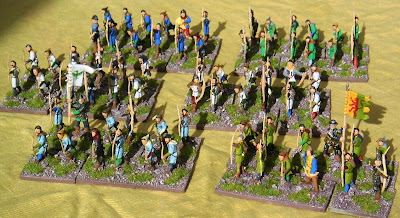 They will form the core of my Hundred Years War English army and provide bow contingents to others such as my Teutonic Order army.

From the Baku Chronicle 1919, all the news that's fit to print and more.

After a couple of attempts Turkish forces operating in Sidedeestan captured two wagonloads of important papers from a White Russian force preparing to hand them over to the British. For his exploits Bolukbashi Allak Bullak expects to be promoted to Bimbashi.

The White commander Major Birkoff complained about being picked on by all three enemy forces and the lack of British support. In his report he claimed "We were robbed" Imperial HQ is very concerned about the loss of the papers.

Kevanski, the Red Commander, caused considerable damage to the Whites, but his conscripts lost heavily in a partisan ambush. Commissar Smirnoff observing his actions said that his performance did not achieve revolutionary standards and that he would be watched for any revisionist behaviour, especially given excuses "like my cards didn't turn up"

Major Shawly-Wight kept firm possession of the town of Nothguorb, and ensured his command was kept intact despite Turkish provocation. There are rumours that some of the Indian officers are calling their commander Shawly-Cautious.

The Partisans were also successful killing many Reds and Whites for minimal losses, unfortunately their commander Mehmet Arkus was killed by a lucky shot from the Whites.The Turkish troops are reportedly heading back to their base on the shore of the Caspian with their loot, pursued by the Reds and Whites.

---------------------------------
The game was a variant of the wagon train scenario I remember as a table top teaser many years ago. The Whites had to escort the wagons across the longest length of the table corner to corner. In the farthest was the town occupied by the British, their allies. Arriving in the nearest corner to the Whites was the Reds intent on killing anyone. In the corner nearest the British were the Turkish with mixed aims capturing the wagons and/or the town. In between were the partisans, nominally allied with the Turks, but more interested in loot.

A five player game, played at the club last Thursday. The rules were a variant on Red Actions with each units activated on the turn of its card. A clever officer card allowed "Clever officers" to take their action earlier (or later) when the card came up.
Posted by Fire at Will at 19:52 No comments:

A great day out to the Derby show yesterday, as usual at the moment you found me on the Lance & Longbow society stand. This time the game was the battle of Lincoln 1141 Here is a view of the action taken from the walls showing the furious fighting over the teddy bear fur. King Stephen's forces to the right, the Duke of Gloucester's to the left. 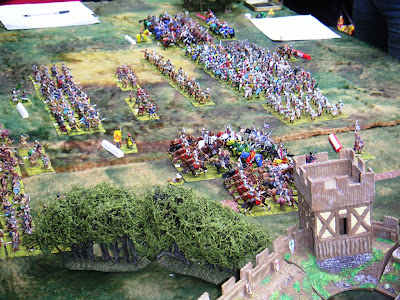 I also picked up from traders

There were lots of traders and the venue is great with easy access and parking, natural light, far better than the old Civic Centre (shows how long it was since I was last at the show)

On a second foray back to the B&B I ran into Andy Callan racking through the plastics, both of us agreeing on the pleasures of rummaging and finding that long desired set going cheap. One of other great pleasures of shows is running into old wargaming opponents, like Andy, from other parts of the country.

Probably the next show I'll be at will be Leeds

I was in my local Modelzone today and saw they had the new Zvezda figures, so I got a packet hoping they would be usable with the rest of my SYW army, that's made up of Revell figures. Unfortunately they are huge. If the PSR sizing is used the the Revell Austrian Dragoons are 24mm and the Zvezda Swedish Dragoons are 27mm. Here are a couple of comparison pictures. 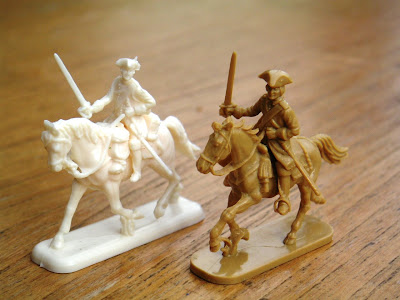 Although the Zvezda cavalryman is substantially larger, the horse is actually slightly smaller highlighted by swapping the mounts. 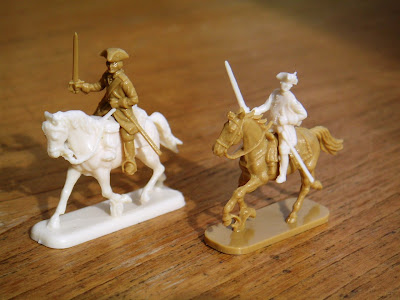 The Zvezda sculpting is excellent as always and I'm left wondering if I can somehow use the figures without the size difference being too noticeable
Will
Posted by Fire at Will at 15:13 7 comments:

Well the HYW archers are well in progress but they will still take quite a bit of time before they're finished. Other items I plan to work on are

The 3rd Silesian Landwehr Cavalry link comes from the Mont St Jean site, a most amazing resource for those interested in the armies at Waterloo.