Where did the money go?

Popped down to South Cheshire Militaire today, just in the hope that there might be some bargain figures around. However part way round the main hall I found a guy selling off his stash of 1/76 unbuilt vehicles from Alby, Cromwell, Millicast etc. after several forays I ended up spending about £120 on 38 vehicles. I'm sure I must have missed some bits that I might have wanted, but......

Even more surprising on the B&B I found the Strelets French Army Camp that I had been looking for for ages and only£2.00.

Overall a great day out, but I suspect my plan to complete everything new that I buy within 12 months of purchase has just vanished!
Posted by Fire at Will at 20:42 5 comments:

My brain can't keep up with my painting or so it seemed. I've got one problem causing a block, which is waiting for the new Zvezda GNW Swedish Artillery to appear, very tempting as always. Then there is a major problem, I can't find any information on uniforms or standards for Waller's Army of the Western Association so if anyone has any information please let me know.

So my plans are:

I also acquired some more Ottomans at York, so they may end up in the list once I've sorted them out

For once I'm ahead of schedule having completed everything a week early, so here is my Bolshevik horde using the Strelets Summer and Winter Red Army figures. Both sets have a mix of figures with and without the characteristic budenovka. My units are made for use with the Red Actions rules for the Russian Civil War and as such I keep the officers based separately. The HMGs are from the Hat WW1 Russian Heavy Weapons set.

Summer uniform with budenovka folded up

Winter uniform, all in greatcoats and the budenovka folded down 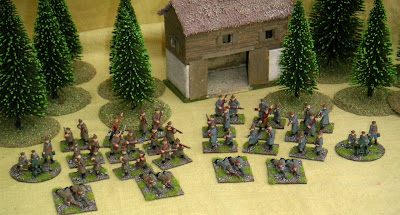 Overall a nice pair of sets, but I would have preferred there to be no lying figures. I had to use the ones with greatcoats as they included the Vickers LMGs.
Posted by Fire at Will at 16:00 1 comment:

Over on my Frundsberg blog the barges are in action with the French crossing the Rhine. 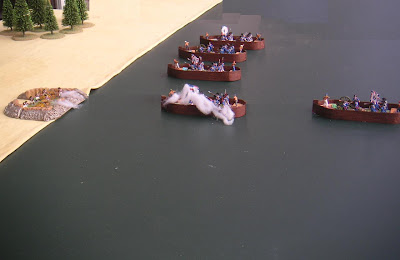 Here's my latest acquisition a Ready to Roll Crusader AA bought from Colin Rumford at York, plus the last of my Minimi vehicles a Humber Heavy Utility, just the job for the divisional staff. I would have preferred an unbased tank, but I decided it was too much effort to remove the base myself. 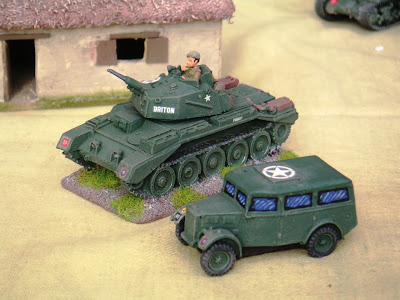 Now the Crusader AA is finished I have all the options covered for a 1944/5 British Armoured Regiment equipped with Shermans, so here is the full regiment. 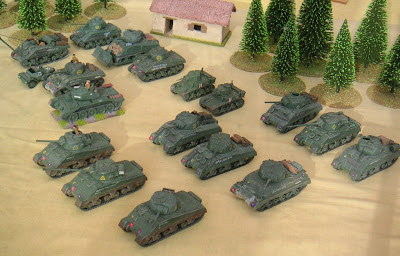 Not bad for a collection spanning over 30 years that has seen a lot of action.
Posted by Fire at Will at 15:54 1 comment:

While clearing up after completing the latest battle in my solo campaign I spotted the opportunity to use my new barges together with my rafts as a pontoon bridge. 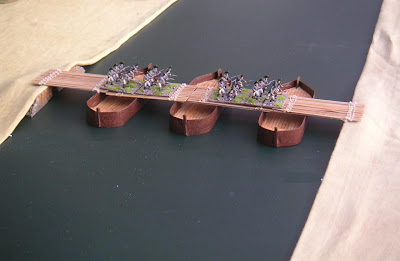 Next up is a couple of Peugeot DMA 2 tonne trucks for my 1940 French Army. Again these are Minimi 20mm resin but without the normally cast on base. 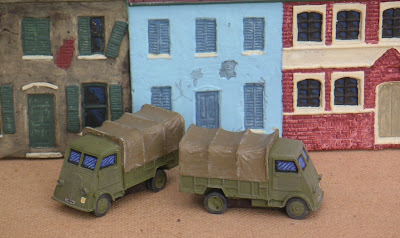 And yes I do know that Peugeot DMA prototype appeared in mid-1940, too late for being used in the Battle for France (May-June 1940).

In the period March 1941- September 1944 almost 16,000 samples of this truck were built (including the Q5A version), of which 87% were requisitioned by the Germans and employed in great numbers in Africa, Europe and on the Eastern front.
Posted by Fire at Will at 13:52 4 comments:

It's been rather slow, but here are my latest vehicle for my Italians. they are finished as per the rest of My Italians in a Tunisian /Sicilian camouflage pattern.

To the left are a pair of Fiat 626 trucks from Minimi. In the centre is an additional camionette desertica from Ready to Roll that I failed to buy in time for the 2008 big game but acquired at York. On the right is a pair of TL37 trucks again by Minimi.
Hopefully the picture show how well the Minimi vehicles look without the base.
Posted by Fire at Will at 20:34 2 comments:

I have always had an intention to create some simple functional barges for my armies ever since seeing one in Charles Grants "The Wargame" . So at long last ,after 30 odd years, I've got round to creating some. They are built to a specific size to take exactly two bases of troops (12 figures) with space at front/back for crew and possibly guns. 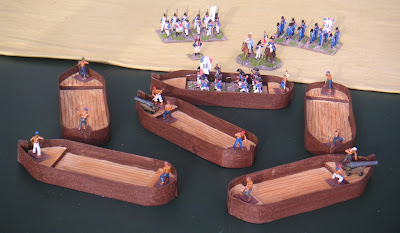 Construction was relatively simple. I used foamcore rather than balsa as I have a plentiful supply, the bow and stern posts are just scraps of balsa and the sides are thin card, the sort from the back of pads. I picked some that was as thick as possible while still being flexible. Hopefully the pictures give a sufficient idea of the construction. 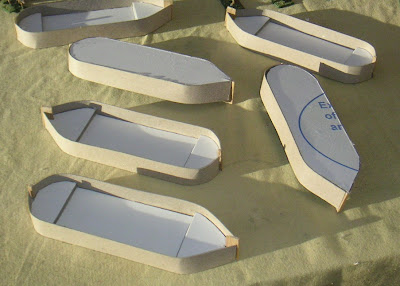 Why build them now? Well my Frundsberg solo game is just at a stage where a river crossing using barges is about to be fought.
Posted by Fire at Will at 10:37 6 comments:

As we got the last of today's sunshine I manged to get a picture of my latest unit for my imagi-nation the Frundsberg Frei Stadt and will act as the Frei Husaren Korps Von Wettin. They are based on the Saxon Frei-Husaren von Schill and will be used as such in normal SYW games. 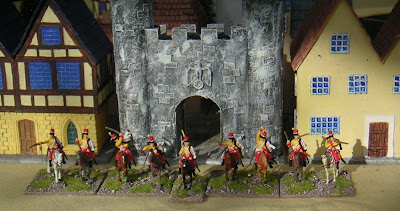 These are the old Revell SYW Prussian hussars and these particular figures have been sitting half started for over ten years.
Posted by Fire at Will at 20:25 3 comments:

Had a good day over in York at the Varnartak show, it seems to get better every year, except this year there were a couple of problems that upset a few people. There was a major queue to book in on the B&B and the turn out too large compared to the hard parking available some some people ended up parking in a field that became a swamp, this was partly due to a lot of locals turning up for football as well.

I didn't buy much, but there were some nice demo games, the Ilkley Lads had once of their usual crusade games (link) and I spotted a nice mosque in the corner, just the inspiration I need for building one for the SOTCW Rif game this summer. 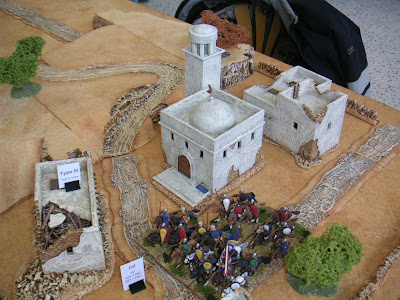 Then there was a large League of Ausburg period game that had a lot of nice modelling but the figures didn't seem to move all day. 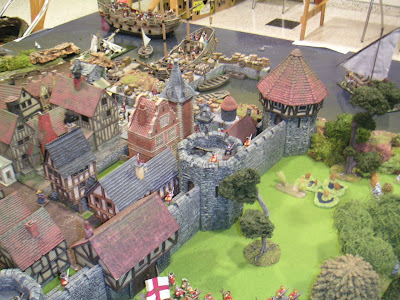 On the Lance & Longbow stand due to a technical hitch we ended up with a medieval sea battle again.

I slipped away to the bar at lunchtime to meet up with the guys from this summers big game and have a chat.

Acquisitions:
Links to some nice photos by James of the Society of Gentlemen Gamers
Posted by Fire at Will at 11:53 2 comments:

Early start tomorrow as I head off to Vapanartak in York for my first show of the year. I'll be on the Lance and Longbow stand most of the time, except when I'm spending money or meeting up with the guys at from the big game at the bar!!.
Please pop by and say hello if you see me 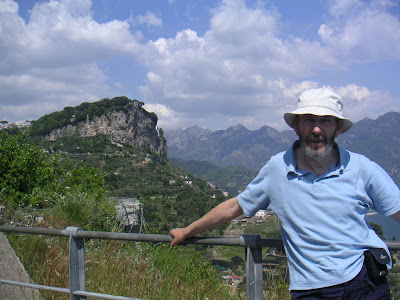 The first of my Minimi vehicles are this pair of early war Sturmgeshutz III, plus two support vehicles a Sdkfz 252 Munitionskraftwagen (Ammunition carrier) and a Sdkfz 253 Beobachtungskraftwagen (observation vehicle) 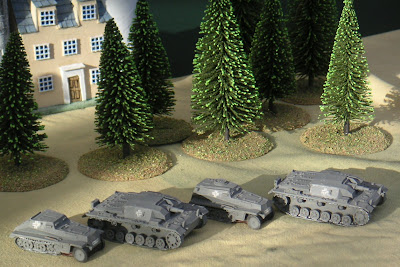 As I mentioned previously these were made to order as Minimi vehicles normally have a thick base, however Lewis at Minimi will cast the models with as little base as possible. Once I received them I was impressed by how little base was left on so it didin't take too long to remove it with a minidrill. I wouldn't recommend doing it by hand as the resin is quite brittle and you could break part of the model by accident.
Posted by Fire at Will at 07:58 No comments:

Well my first item this month is my Minimi vehicles as I've bought a minidrill at last, so expect to see these fairly soon. I then have some items for my solo campaign an eight figure unit of hussars based on the Saxon Frei-Husaren von Schill and some barges. Finally a horde of Russian Civil war figures for my Red Army, these will mainly be Strelets, probably with some head swaps with the Hat WW1 Russian Heavy Weapons set.
Posted by Fire at Will at 16:36 No comments:

For a change we travelled down to Bath through the Marches so we could bag a couple of English Heritage castles en-route, just as well we did as on our return we found on off road works up the M6.

First stop was Stokesay, a fortified manor house, the unfortunate part was that the impressive gatehouse was undergoing restoration. Built in 1281 it nicely reflects the period of transition from castle to manor house 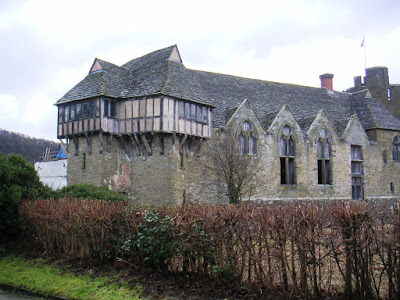 The second Goodrich was quite a contrast as it was very much a classic idea of a castle built on a rock spur overlooking the river Wye. The effect was enhanced by strong winds and snow shower just as we reached it and we sheltered from the blizzard in the gateway listening to the audio tour. From then on the weather improved and we left in bright sunshine It is certainly well worth a visit, especially for the ascent of the keep up very uneven steep and dark winding stairs. 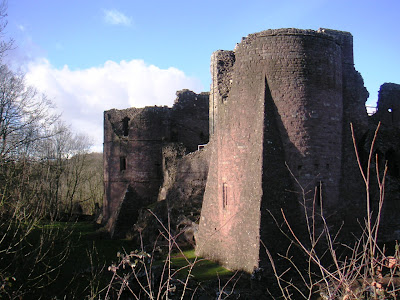 Once in Bath I attempted to do some research in the Reference Library on the battle of Lansdown. In my late teens I spent days in the Reference Library, then in Queens Square, as they had an extensive military section, but all this seems to have disappeared, and they didn't even have a book on Landsdown in the collection, except at Frome(why there?). I found a few bits but I'll have to use Interlibrary loan to find more.
Posted by Fire at Will at 13:12 2 comments: