A small collection of figures from Orion. These will be used to represent bailed tank crews and some general eye-candy. I'll use some of the other poses from the set for open-topped vehicle crews. 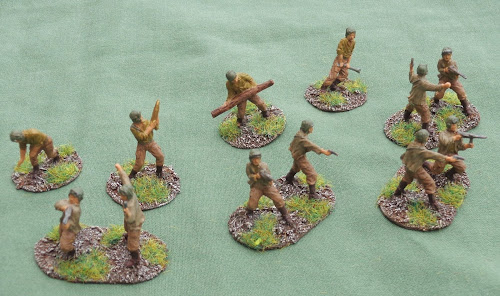 My first three Plastic Soldier Company CMP trucks. I've marked them up to round out some existing units 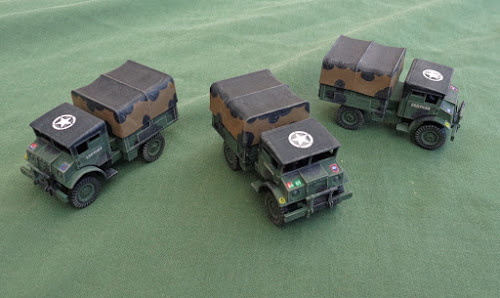 As part of my new Rapid Fire British Field Artillery Regiment I needed three battery command and a regimental command stand. Luckily I got two PSC command packs included in the Kickstarter so I only needed a couple of extra figures to make up the numbers 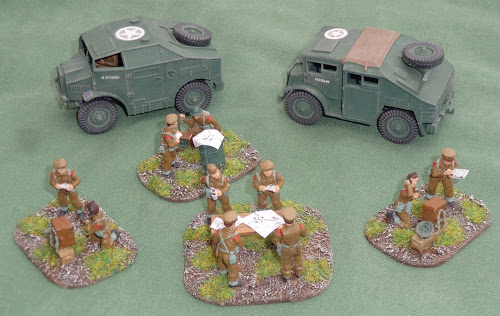 I also added a copy of extra battery command stands for my desert British. 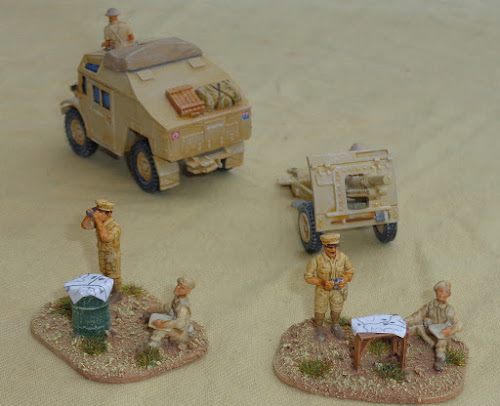 Another PSC kit from my Kickstarter stash completed. I originally tried to make the base and body separate with magnets to attach them together, this would have allowed me to create a standard version as well. However after various attempt I gave up as I couldn't get strong enough magnets in the space available. 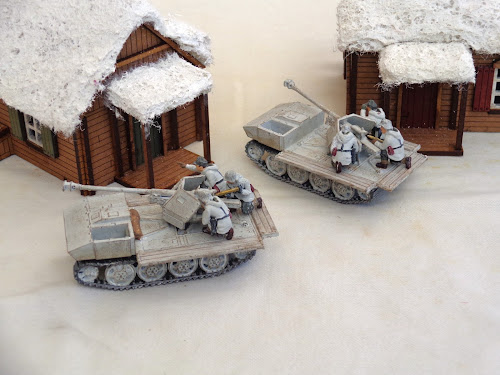 The crew are the standard PSC Pak38 figures with hoods added from green stuff to make them appear to be wearing parkas.

I've made them Beute-iful. I repainted my old British desert versions as captured versions used by DAK. The crews are the PSC 25pdr crews with head swaps to make them German 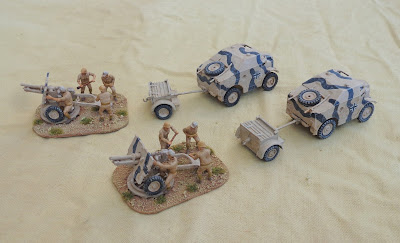 While working on the new 25pdrs I decided that there was no point leaving the rest of my British Artillery untouched as it would look out of place compared to the rest of the army. So here are my upgraded 17pdrs and 5.5" howitzers. 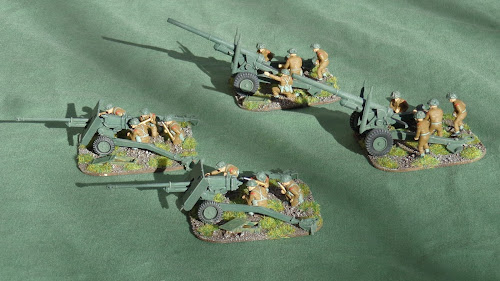 The crew for the 5.5" guns are some of the spare 25pdr crews with some large rounds added. The 17pdr crews are those for the 6pdr, but with some Sgts Mess 17pdr rounds added to replace the 6pdr ones.

All the guns needed some repairs, but one 5.5" needed most of one side replaced which involved a new barrel, trunnion and trail, which luckily I had in my bits box.

After the enforced delay due to going on holiday here is my new PSC British Artillery Regiment.

One battery has Morris Quads wheras the other two have CP Quads. 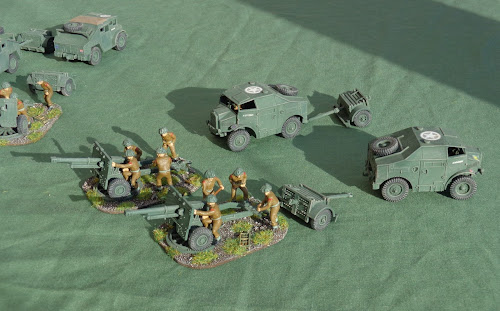 My old guns, which will be retired. Airfix hard plastic to the right soft to the left! 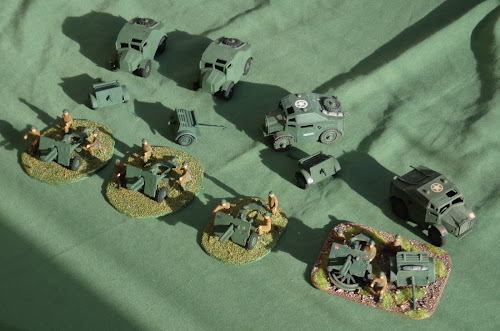 For those who like a comparison of old and new. 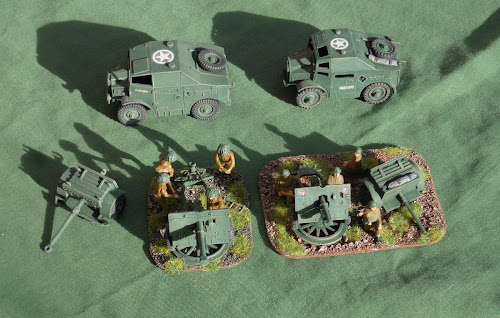 Further work is needed on the battery and regiment HQs
Posted by Fire at Will at 19:32 5 comments:

I attended Vapnartak in York very much as a "paying" customer yesterday (over 60s are free) as the Lance & Longbow society wasn't running a game, but I did spend some time manning the recruiting stand. Here's some pictures of games that caught my eye.

The men who would be kings participation game - seemed to be be good fun, must get around to playing it now I have read the rules. 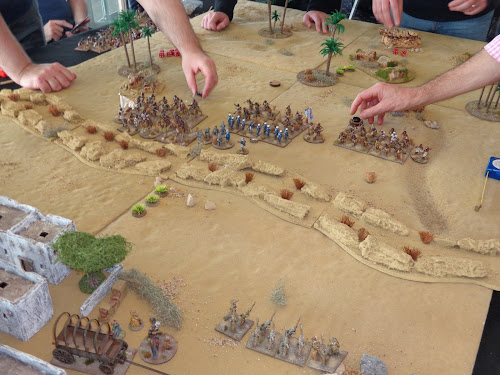 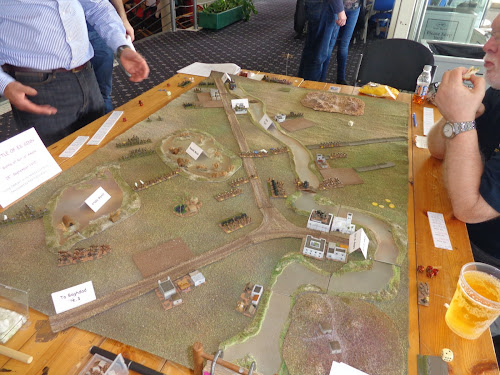 Wings of War, I've played it a number of times, but never with Gothas 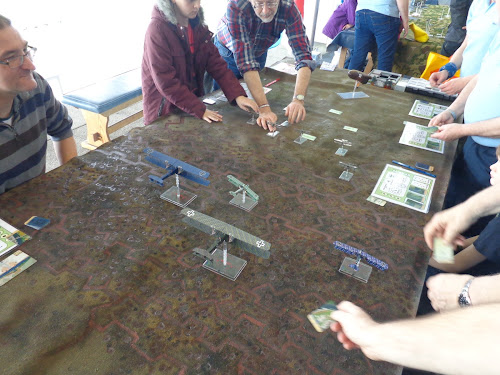 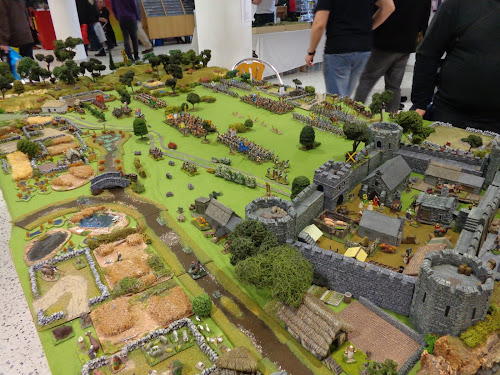 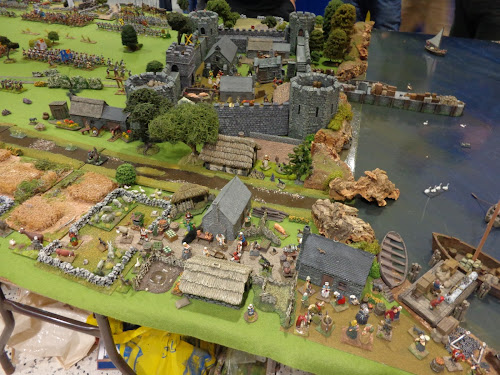 The other Kut-al-Amara game in 28mm, great eye-candy, everyone having lots of fun, just let down by not having anyone doing "front of house" 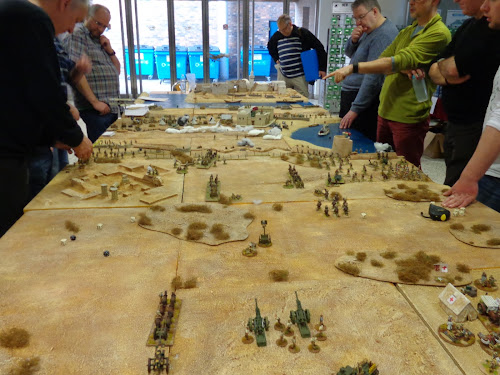 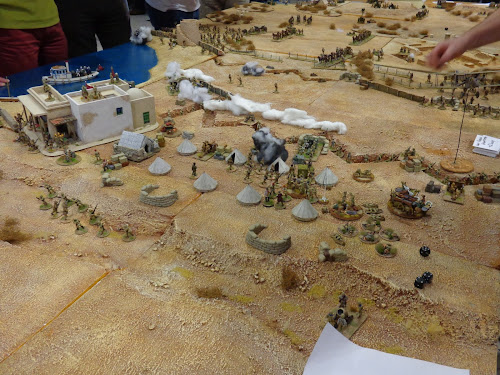 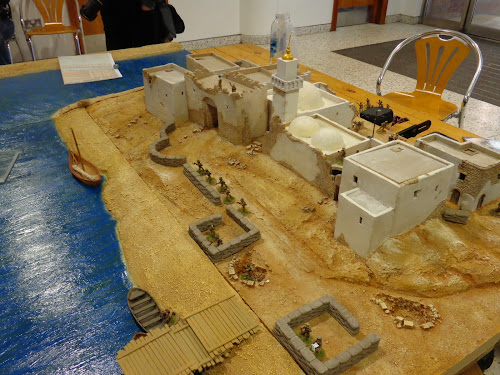 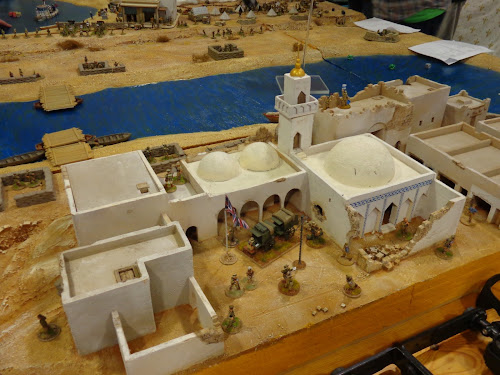 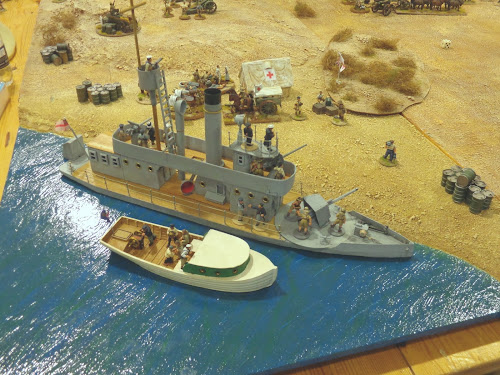 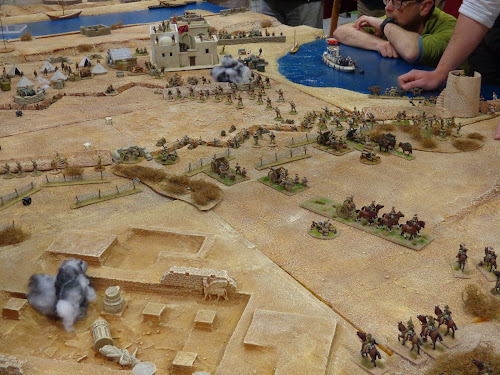 It did feel that there was a lack of games this year and there were empty corners where I think there were traders in previous years.

This month is much like last as I over planned and then went on holiday for a couple of weeks. I'm looking forward to Vapnartak in York this weekend, where I hope to get some inspiration and some bits and pieces.

So a more comprehensive list including the Kickstarter stuff.