My ECW foot regiment (Warlord figures) is almost finished, but I still haven't decided how to base them, currently I use either 1633 or WECW, but I prefer whole base systems, so I'm waiting to see what the Black Powder renaissance rule use. If I were to start from scratch I would use a 3 figure frontage for infantry and 2 figures for cavalry on a 60mm wide base.

Meanwhile my attempt to clear the Crewe, etc, backlog progresses

A nice Grille/Bison, I think it's from Cromwell, in the background a reworked Airfix Sdkfz7 that I've repaired with bits I picked up. 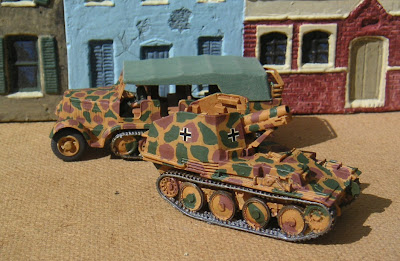 A real treat, a Milicast Tetrarch,just what I need for my British Airborne, or to invade Madagascar. 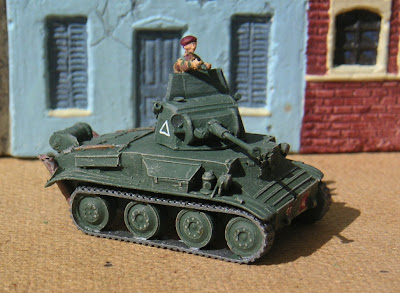 Finally a Milicast Dorchester for my 7th Armoured Division in the desert. 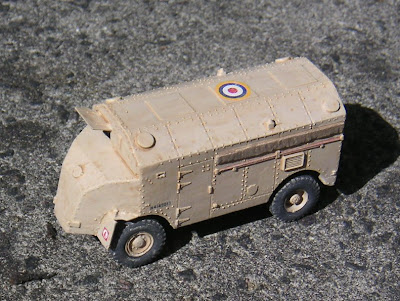 Right seems a while since I last posted anything, so here is some British bits.

To start with are a couple of Sextons made by S&S a couple of solid models, all I need to add now is some crew and I'll probably wait until the tank riders/passengers appear from Hat. 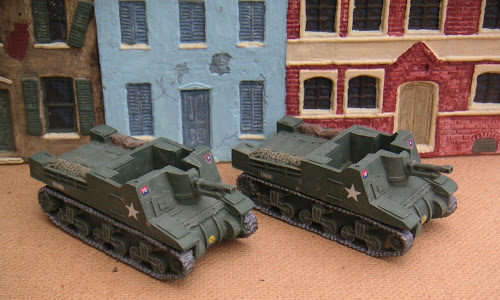 Then to add to my large number of carriers a Windsor carrier (left) that I will use for my 4.2" mortar team and a Lloyd carrier that I will correctly use for a 6pdr tow. The Windsor is by Milicast and the Lloyd from Cromwell. Again crews and some relevant stowage need to be added. 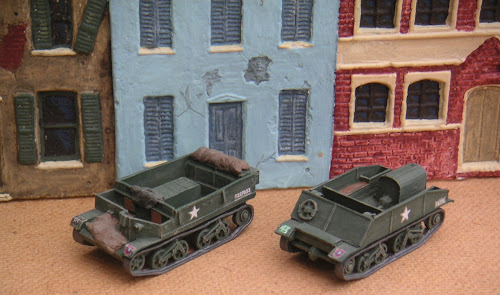 Lastly a wonderful Milicast model of a Matilda I, just the thing to frighten the Germans in 1940. 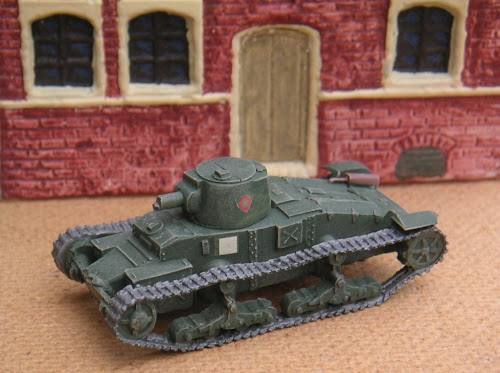 As luck would have it, a family visit coincided with the Devizes show so I got a morning there before heading off the a village fun day with my daughters.
My impression was that the show was similar in scale, etc to Gauntlet, but much better known, with more traders and visitors. It seems that one of the big attractions is the B&B and I certainly picked up a bargain, and there was plenty of stuff available, reasonably well laid out, and without the vultures seen at some shows.
No real eye candy so no pictures, but I met up with a number of wargamers and enjoyed an excellent pint of cider. So what did I buy? A large box of tanks of which I only wanted the US Para Jeeps and some Medieval Swiss Pikemen. So I now know that the US paras will be painted before the Brits. 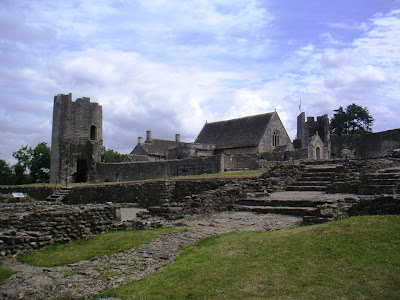 On the way back into Somerset I manged to divert into Farleigh Hungerford castle for a quick visit. The ground area was quite impressive and it must have been a substantial castle in its heyday.
Posted by Fire at Will at 19:27 No comments:

Well half a year has shot by and it’s time to consider progress against plans and how the rest of the year might pan out. As per the last two years it is a good time to check as the two big events of the year are now past.

68 bits of equipment, including 27 WW2 vehicles and 14 guns and limbers for the WSS

101 bit of terrain of which 35 pieces were rework of existing terrain ready for the Rif game.

I now need to move onto some of my other targets.

c) Some sort of Arab/Mameluke army for the crusades. – still on the back burner

d) Finally build a new 28mm ECW army using the warlord plastics broadly based on Sir William Waller's Western Association army, that fought at Lansdown, Roundway Down, Ripple Field, etc. – I’ve got the figures and one cavalry unit painted, but I don’t find the infantry all that inspiring and a PITA to assemble (and I’m a plastic modeller!)

I plan to concentrate on the ECW and completing some of the new WW2 armour I acquired at crewe in February and then move onto one of the two para brigades.
Posted by Fire at Will at 15:24 8 comments:

Moving on here are the finished hit markers for the British. In the background is one of my British regiments, the "Royal Wessex" flanked by a Gatling gun and a Gardiner gun (both lovely Jacklex models) 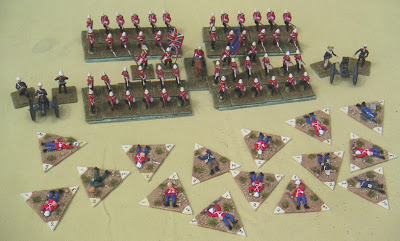 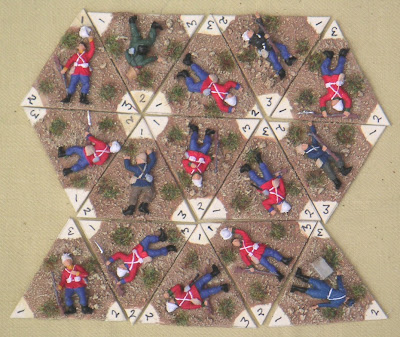 Yet another set of Black Powder casualty markers, It was just as well I put the shot/dying figures from the Esci sets to one side just in case they came in useful. 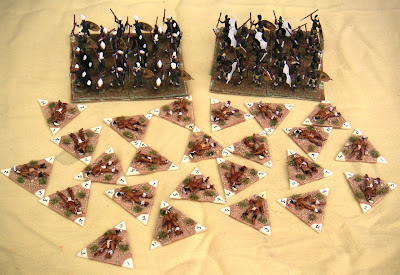 This time I created a few with 2/3/4 so I could use them with larger units. It's also interesting to note the change in my painting/basing since I produced the original Zulus back in 1985 (they are 25 years old!)
I also took a vertical shot so I could create some extra to use if needed by just printing out on card and cutting them out. Please use if useful. 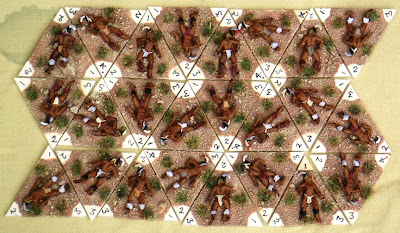 A quick update to show the progress on upgrading my trees, so far about half have been reworked. This has involved rebasing, adding new rubberised horsehair and flocking.

On the right is one of the old ones, showing how much hair it has lost (like me) over the last thirty years. The basic armature is copper wire and I just need to open it out to add more horsehair. 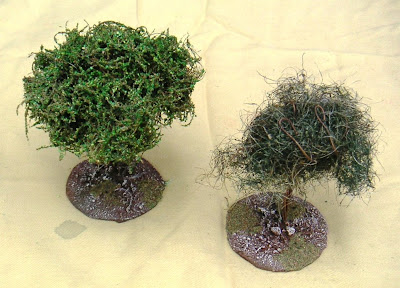 The "flock" I used was some similarly aged old scatter material, principally made up of coloured sawdust. It works quite well for leaves, but the problem now is that there is not enough to cover all the remaining trees and therefore I need to find something similar.
Posted by Fire at Will at 14:49 3 comments:

Ideally this will be more of a rest month after the sprint to get ready for the SOGG big game and then Gauntlet. So I'm going to concentrate more on what is different. 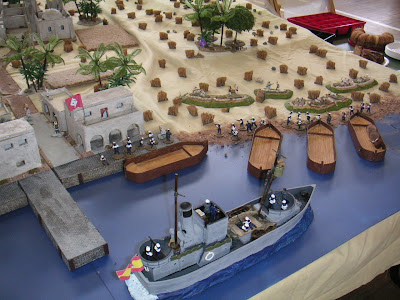 Just uploaded all my pictures from the SOTCW game at Gauntlet onto Flickr (link).

The rules were a simple set from Richard baber the editor of the SOTCW journal, hopefully he will print them in the journal sometime soon. The key parts that kept it fun and flowing was the roll every turn for ambushes and events. The events came from a deck which reflected a lot of the features of the wars against the Rifs.
Posted by Fire at Will at 07:27 2 comments:

Well after an exhausting few days it's almost arrived, and as usual I have not completed everything I would have liked. Last year it was creating all the new roads, this year I have not managed to rework all my trees, I hadn't realised quite how worn my old trees had become until I started the job. However my first impression are that the reworked trees will certainly pass muster, but I need a lot of new rubberised horsehair.

My original tree are about 40 years old and the bases were curling, but I hadn't realised how much the foliage (horsehair) had eroded, it was less than half the original diameter. What is left is OK, but whereas in the distant past I ad a free readily available supply, now I have to pay expensive prices for it so I have to be more careful as I use it.

A number of old and new trees will be in us tomorrow on the SOTCW game so please pop by if you are anywhere close. Usually the B&B is good value (and free for sellers)