I'm on a bit of the roll at the moment. These complete my Roman army rebasing project. 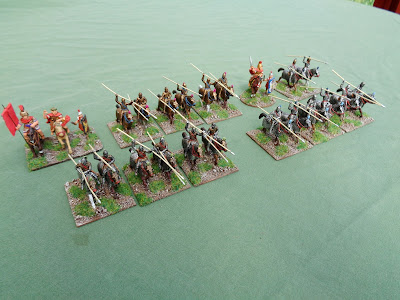 The HaT cataphracts didn't really need rebasing, but unfortunately it was a desert colour so it was not consistent with the rest. They are underscale compared to Rospaks, but on the battlefield in seperate units it's not too noticable 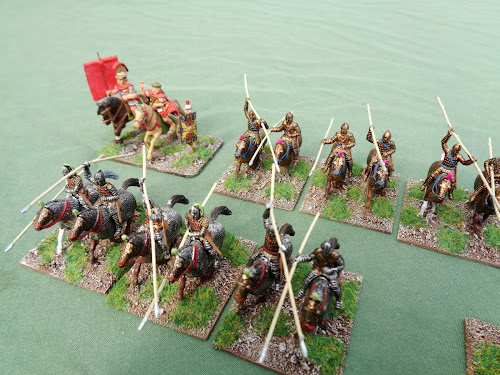 The commanders are old 25mm Minifigs, they are a bit too large/chunky. I wonder if there is anything out there more suitable? 28mm would be too big, maybe 3D printed? 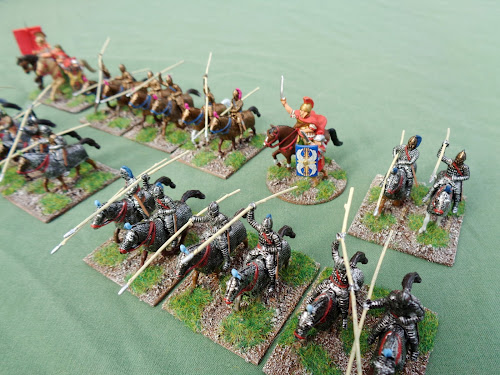 A bit harder this time as I had to deal with the broken pilums and replace all the decals so that the units looked consistent. 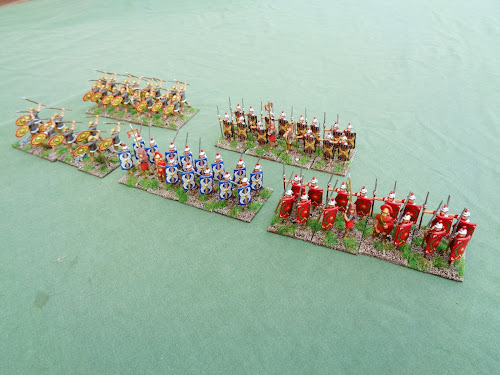 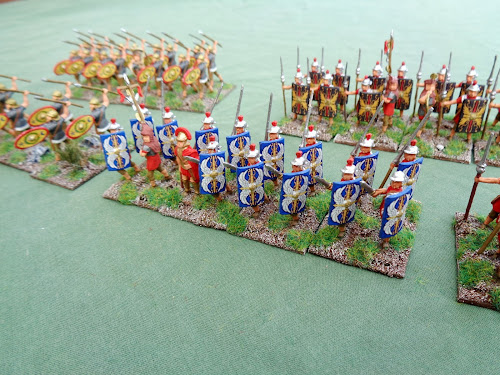 I really liked these new bonus figures that came with the Strelets Prussian cavalry and I hope they will continue producing them as a replacement for the traditional Streltsi. 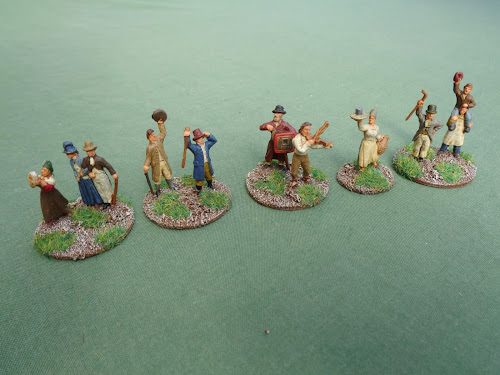 Well Andy beat me to it again, he posted his painted half packet yesterday. These are Mars figures and like many of their newer sets they are quite nice mouldings. I gave them a mix of civilian and military dress all linked by a yellow volkssturm armband. 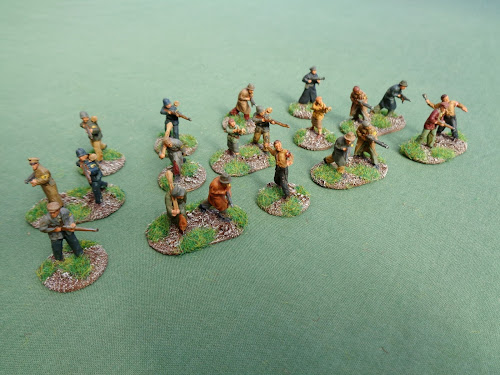 They will all end up fighting in "Fall of the Reich" games togeher with whatevery other mixed figures I want to combine them with.
Link to Andy's blog (link)
Posted by Fire at Will at 14:05 1 comment: 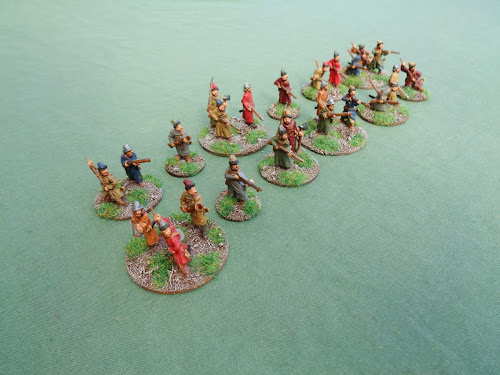 I still have 85 streltsi in the stash that I have to decide what to do with.
Posted by Fire at Will at 14:54 1 comment: 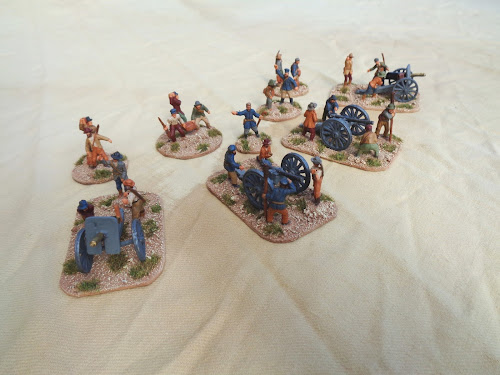 Theses are two Krupp 75mm field guns and a pair of 1pdr pom-poms from Strelets, surplus crew has been used for command and loader teams 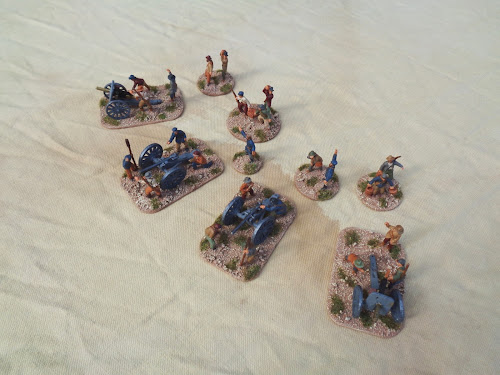 Maybe I need to add some limbers?

Just found this awesome photo of the Krupp Vorrathswagen (supply wagon) from a Krupp catalogue kept in a Portuguese museum. This is the exact model the Boers imported as well and the limber I am restoring:

Continuing the rebasing, I worked on a couple of units each of bow and javelin armed auxilliaries. Each existing unit of 24 figures bacame a close order unit of 16 and an open order unit of 8.

All the figures are Rospaks who only produced two poses. 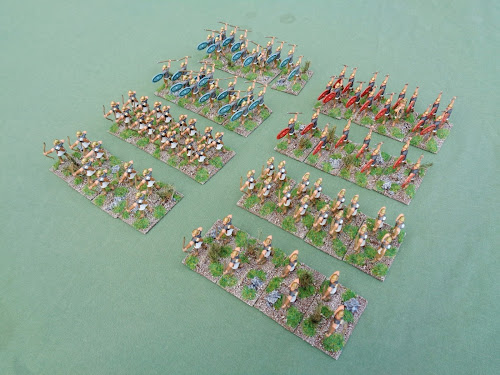 Luckily with these there was very little rework except a couple of broken javelins needing replaced. 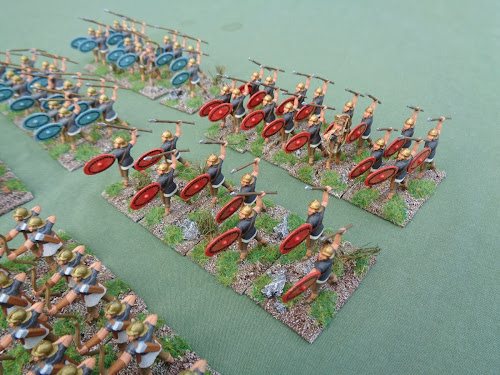 If I need to use the figures in their old WRG 6th context, then I simply have to alternate the close and open order bases 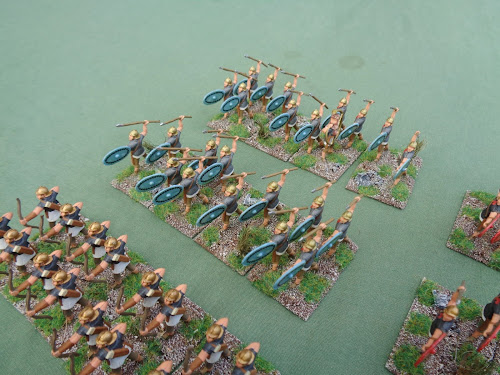 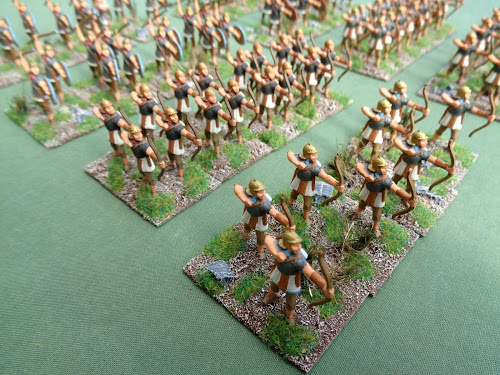 Now I'm into the more serious reorganisation and repairs
Posted by Fire at Will at 21:13 1 comment:

The latest tank crew set from Orion depicts them in Pixie suits. I shared with contents of a packet with Andy and Peter. Andy has already posted his (link)

They are lovely figures with plenty of detail 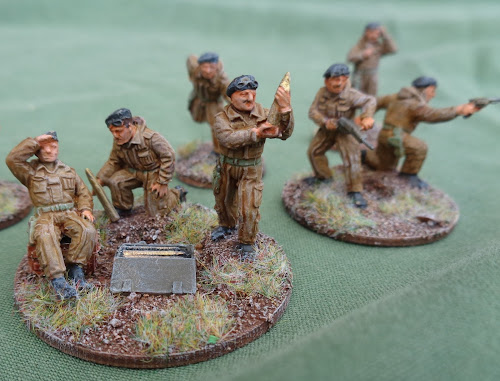 The Legions are marching 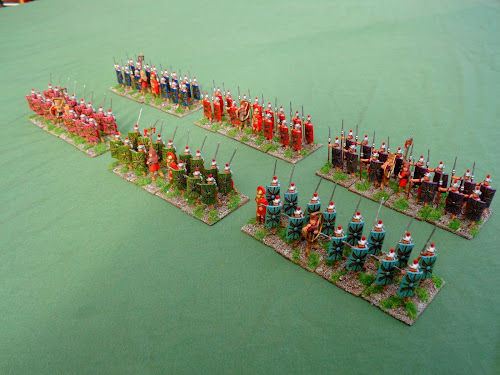 These were quite simiple as I was reducing the unit sizes down from 24 to 16. The remainders will need more repairs and reworking to make complete units. 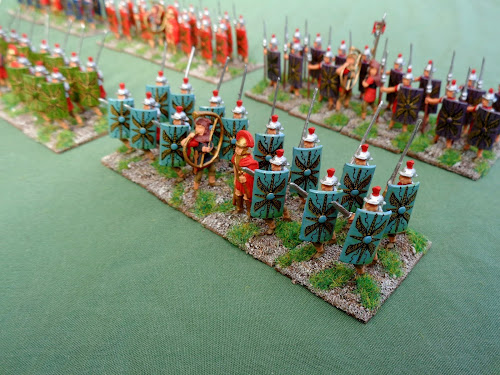 I've already got a fair sized collection of Prussian cavalry but when Strelets released their new sets I had to support their iniative. So I decided to paint a number of units that contrasted the more standard ones in my army. 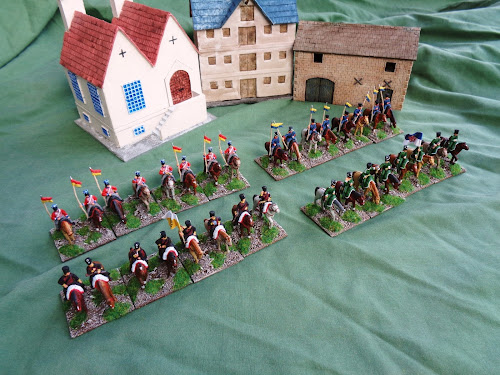 The easiest, the 7th Uhlans from Waterloo, ex Heilwig Streifcorps 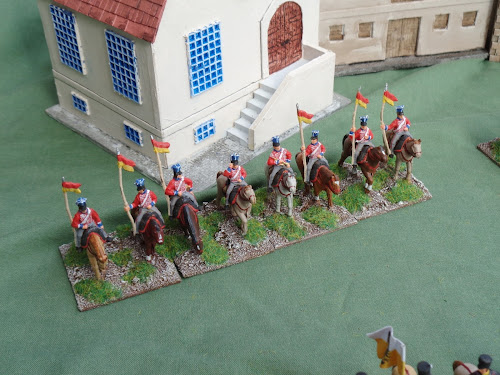 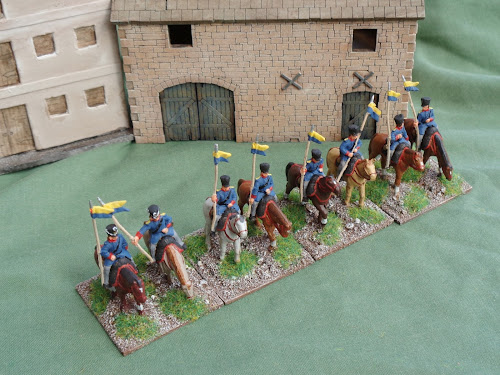 Silesian National Cavalry, basically a hussar uniform. There are two variants of the uniform with red or yellow collars and cuffs, I went for the yellow. I gave them a Silesia flag to add some more colour. In the 1815 reorganization, two squadrons of the regiment went to form the Guard Uhlans and two squadrons went to the 7th Hussars. 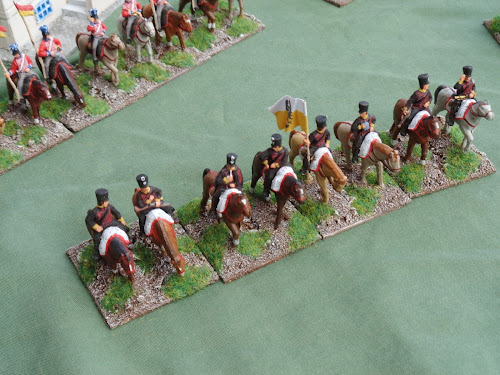 Pommeranian National Cavalry, a green variation on the dragoon uniform. Again I gave them a flag Pomeranian this time. In the 1815 reorganization, two squadrons of the regiment went to form the Guard Dragoons and two squadrons went to the 4th Uhlans. 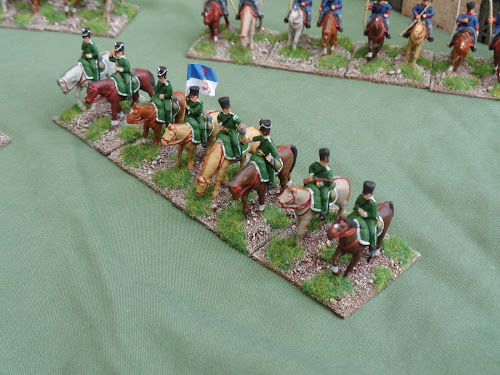 It would be nice if Strelets now produce a set of Prussian cuirassiers suitable for 1813/14 i.e. without cuirasses.
Posted by Fire at Will at 08:24 5 comments:

Stepping back in time - Roman Cavalry 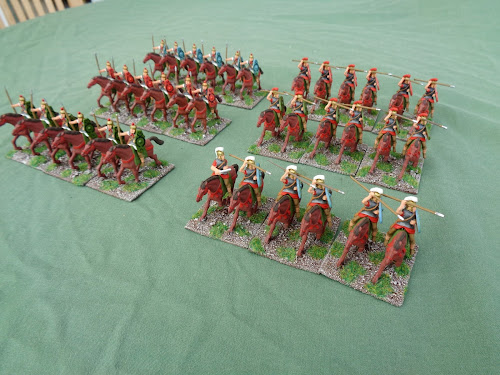 Unlike the Greeks I decided not to try swapping the arms around. Partly because I thought I might need the sword arms fort the infantry 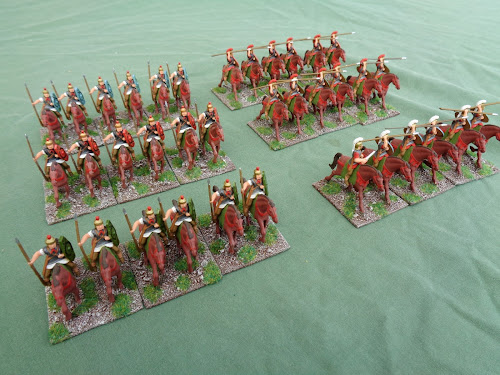 When I first saw the kit was a snake running along its length I knew I had to have one and when it came up on ebay the deed was done. 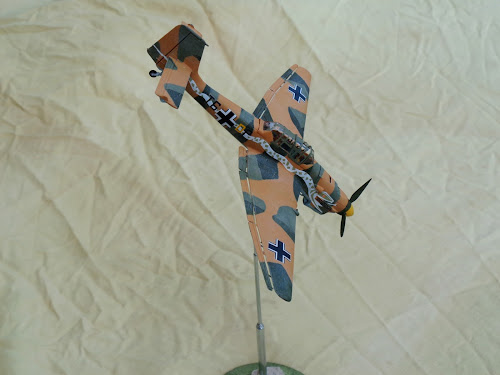 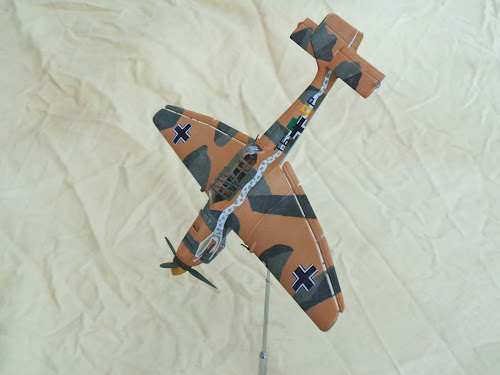 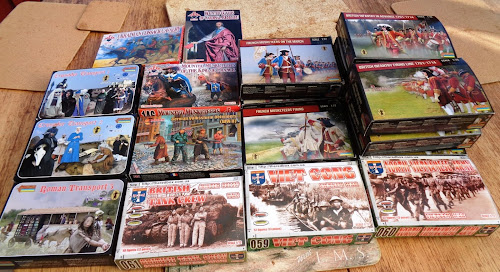 After a successful February's painting I feel I might catch up with the lost time in January(maybe?) So while waiting for another large order of figures I'll be working on:-