I'm behind on plan but my"background task" of working on the rebasing continues. This finished all the rebel militia, I have swapped some figures around to improve the appearance, but generally not bothered. 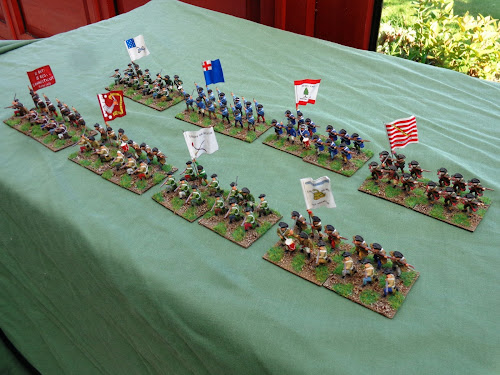 Just the commanders to work on now, and they will need extra figures added like all my other tricorne stands - something for next month.
Posted by Fire at Will at 20:19 2 comments:

I've rebased my additional continentals, in the front rank, plus a couple of units of militia and the remaining cavalry 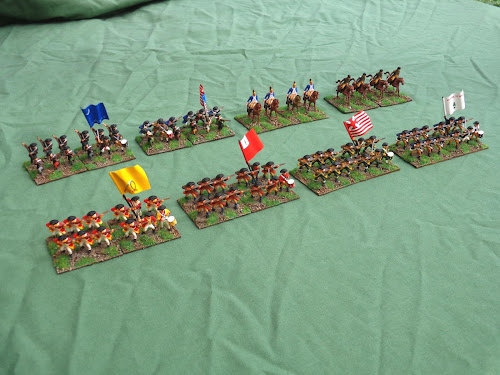 From left to right the regiments of Samuel Webb, William Lee, Henry Sherburne and Thomas Hartley. The cavalry are the 2nd Dragoons (Sheldons) and 1st Dragoons (Blands)

Very much an impulse buy when I saw it in the Early War Miniatures damaged remnants bin at York. I've patched up the four wheels and scratch built a turret. 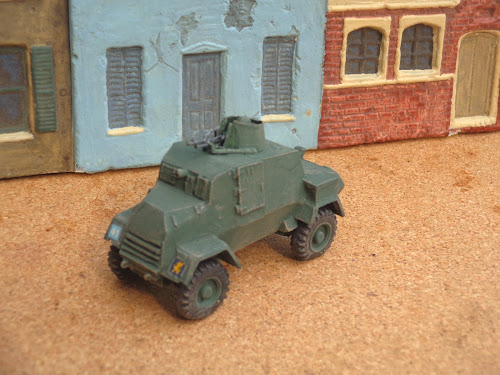 I've given it markings for the 43rd Wessex Division to fit with the rest of my forces, but I don't know if they actually used any. 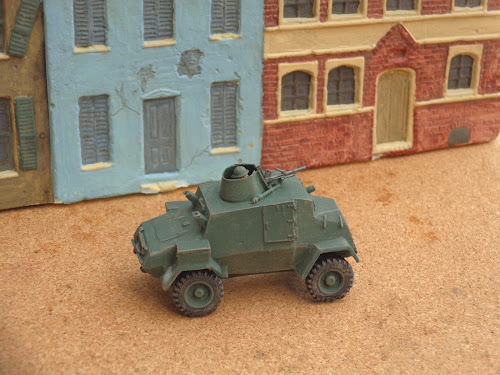 For those interested the turret was created with a cone of thin plasticard fitted and cut to shape. Then reinforced by a second layer and then the MG aperture cut out. The MG support was part of an old aircraft undercarriage.
Posted by Fire at Will at 15:57 2 comments: 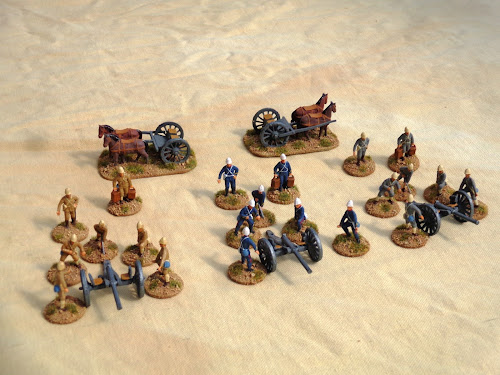 The guns are only used for the Sudan and later as the British Army reverted to muzzle loaders during the Zulu War.

I'm not sure about a few of the poses, especially the limbo dancing characters who should be adjusting the bearing by manoeuvring the wheels.
Posted by Fire at Will at 20:49 5 comments:

Up until being admitted to hospital I had been making great progress with my annual plan. The final result was 810 items made up of

I'm all behind at the moment, I finished rebasing these at the end of March. They New York brigade is my original rebels painted way back in the 70s for a Saratoga campaign. The four regiments were originally either standing or kneeling firing so I had to swap some of the figures around and also repaint them as all the coats, etc. are different. 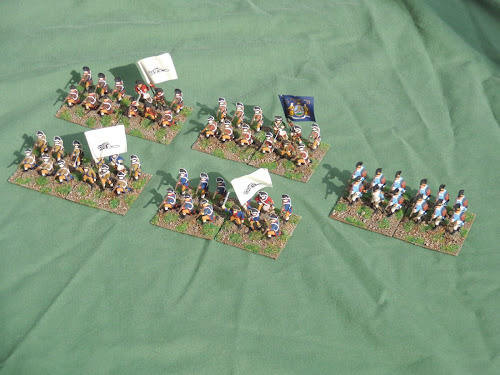 Accompanying them is a single unit of Lafayette's Light Infantry 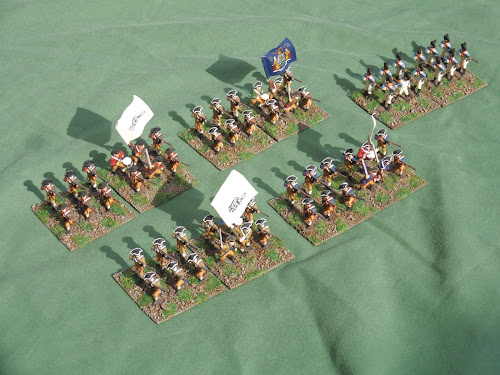 I had thought I would have a clear run through March to make progress against my 2019 plan. Typically life threw a wobbler in the middle of the month with an emergency two night stay in hospital and I'm still not back to normal as I can't paint for more than 30 mins at a time. So I have a backlog to catch up and for the rest of the month life is beginning to look complicated. Hopefully I will work on:

For Crisis Point this year myself, Andy and Richard put on a couple of games based on the proposed German/Italian assault on Malta in November 1942. The rules were Battlegroup with most of the stats from the Tobruck book

Day 1 was the airborne landing and the attempt to seize an airstrip. 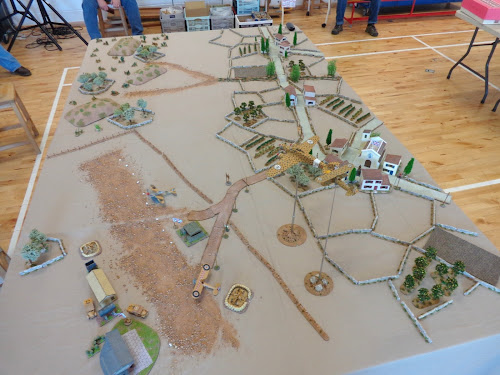 Italian Aircraft over the table 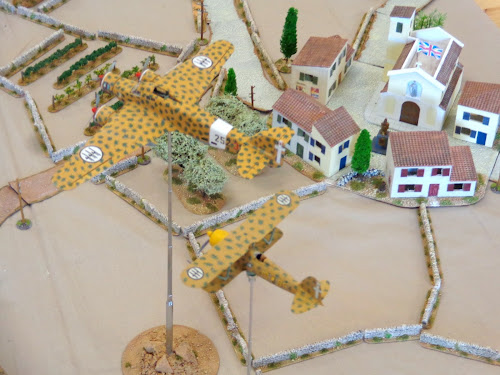 The runway, defended by an infantry platoon and a couple of bofors guns 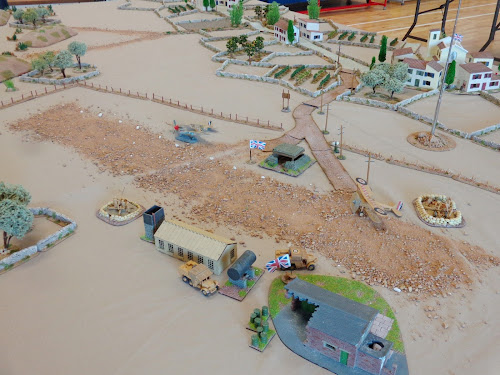 All quiet on the rest of the table, British reinforcements will arrive on the roads on the opposite side of the table to the airstrip. 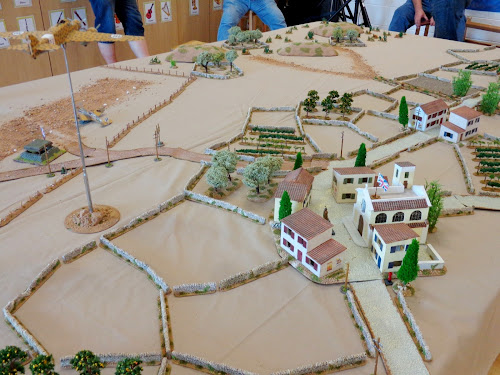 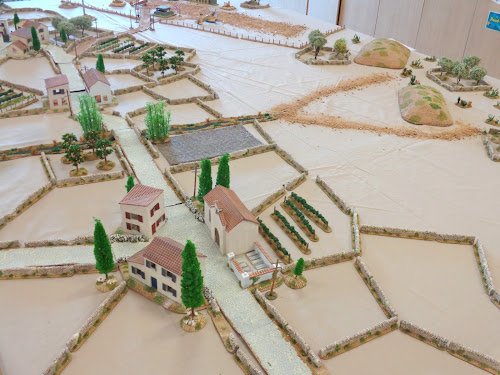 A "nice" clear area for the para drop 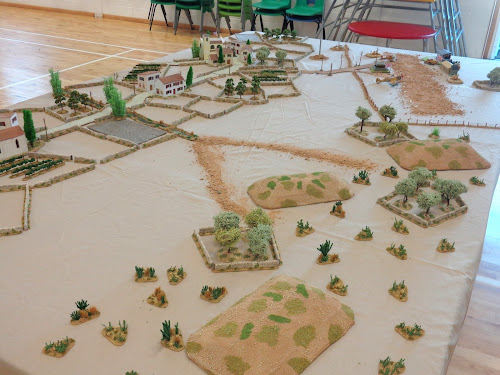 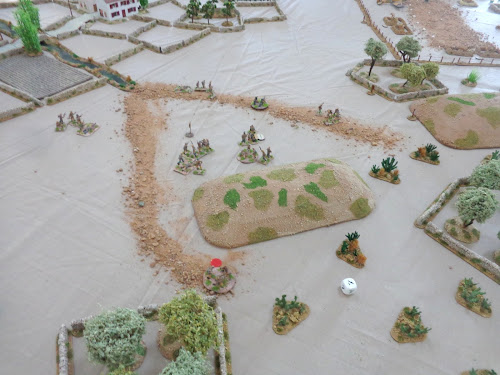 The situation after the other two platoons (one German the other Italian) had dropped. The Germans landed successfully, but the Italians managed to drop a lot of their unit in the olive groves. 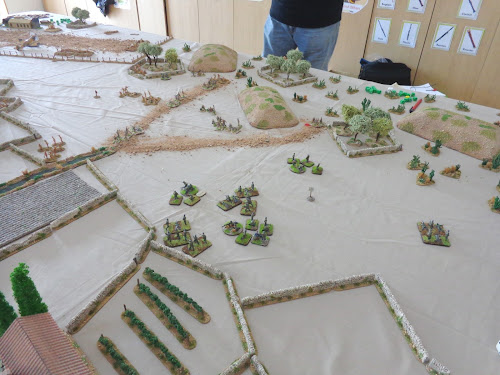 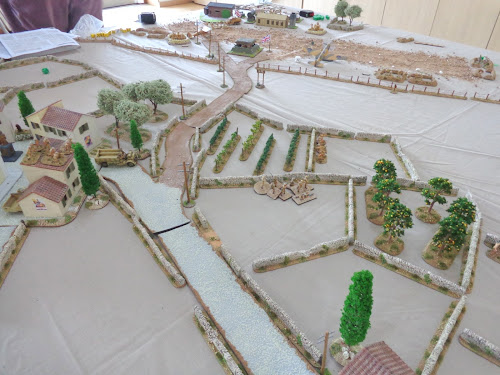 The airstrip about to fall, the Germans have taken most of the nearest end. 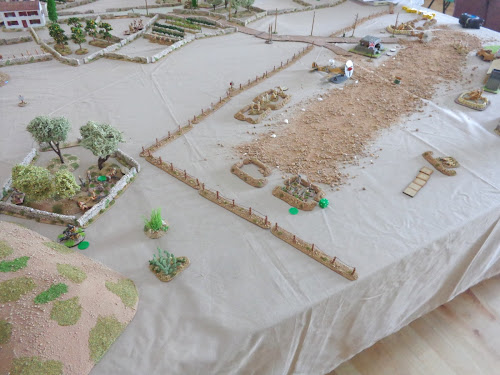 Not quite in time, a Matilda arrives 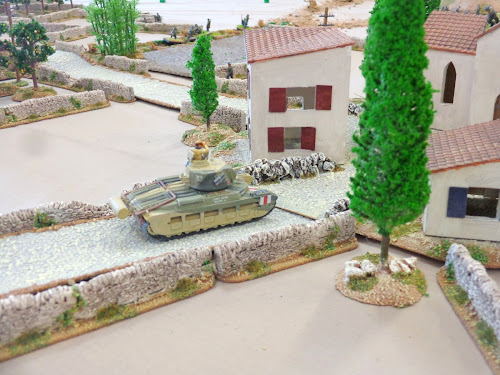 Preparing for Day 2, we skipped on from a beach landing to their attempt to meet up with the successful airlanding forces 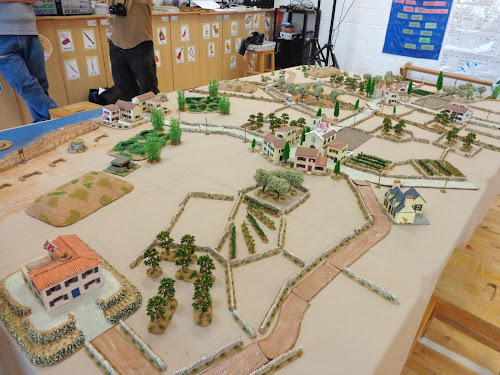 The landing beaches - the defences have been cleared and the combined German and Italian follow up forces had to break out. 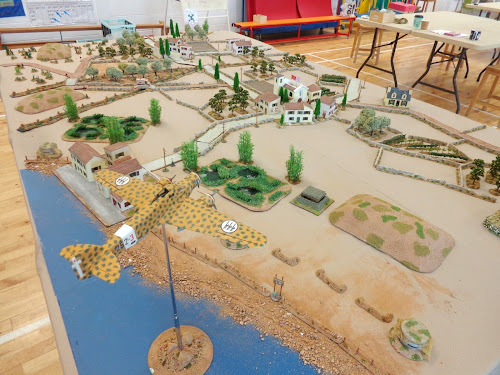 The approach for the Gebirgsjager from the airstrip. 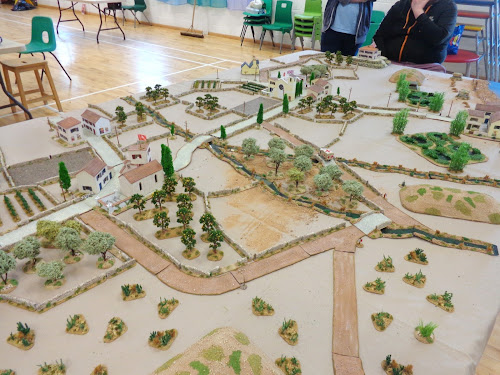 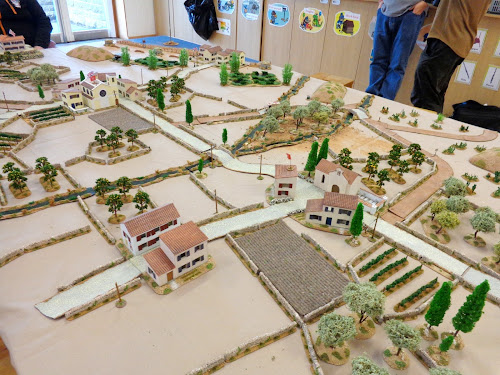 The British right flank taking a hammering from the Gebirgsjäger 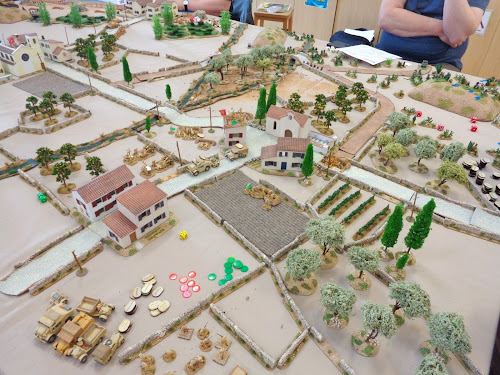 A KV-2 rumbles up from the beach, a British 25pdr managed to immobilise it shortly after and later on it was abandoned 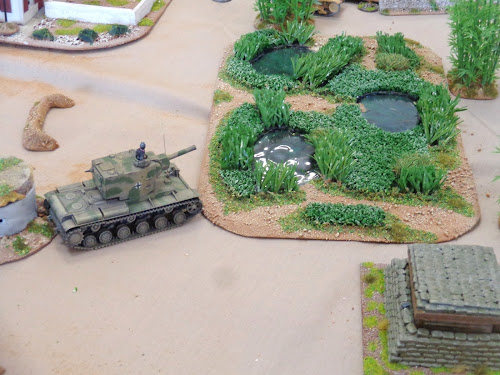 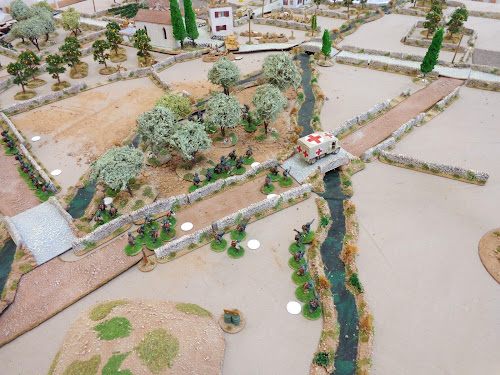 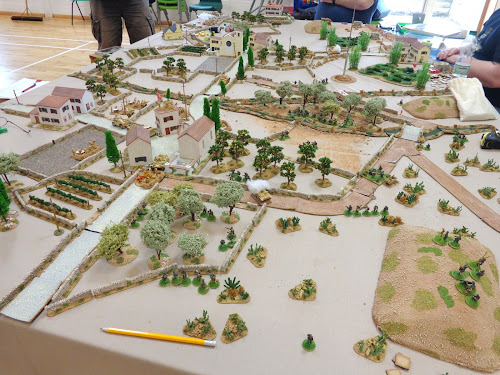 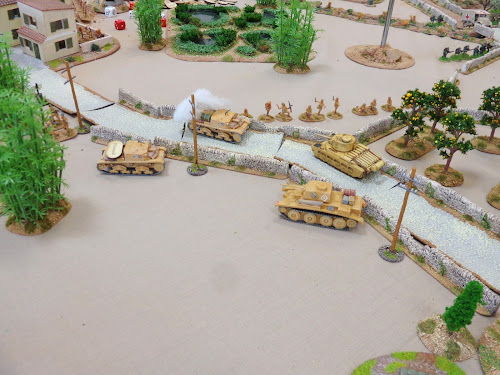 So a day of two halves both left flanks were successful 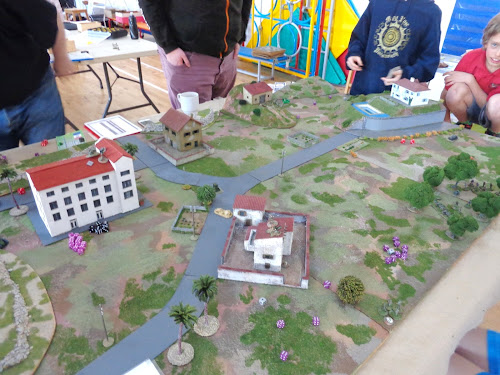 Song of drums and shakos - the French Revolution in Northern Italy. 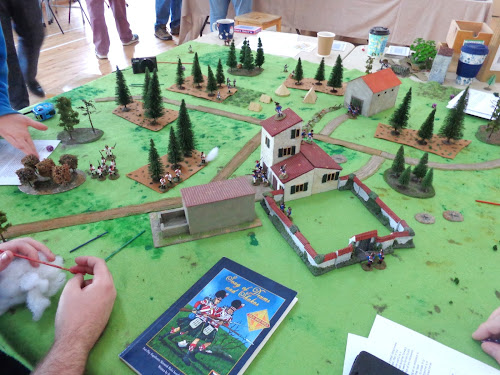 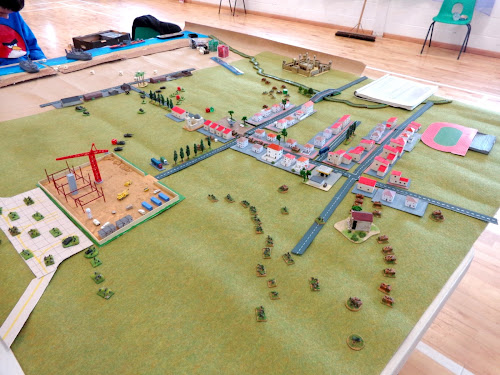