Output peaked again with 2,508 items completed an increase of 10% from last year. But like last year the amount of rework boosted my output. A quick breakdown of the output shows:-

So despite some impressive output I still did not achieve my targets for this year. However like last year there was a lot of rebasing going on.

The major project is Tricorne rebasing, covering all my Seven Years War and American War of Independence armies, this is ambitious - around 2,000 figures, but hopefully it should just be "cosmetic" as I won't be physically changing the units or bases.- The Prussians, Austrians and French Forces are completed. The British, Brunswick and Hessian cavalry are all done. What remains are all the AWI figure so these will be carried over to 2019

Painting/Modelling - moderate sized projects
Smaller projects
Gaming
Stash reduction
Just as well it's not a formal target as the stash rose from 6,946 items to 7,747 due to a number of causes

Aninteresting change of pace for the last game of the year, a big game using early ECW troops and the latest adaptations to FoG-R. The venue was at Bristol Independent Gaming a lot further south than my usual haunts and meeting up with old and new SOGG friends. I managed a few pictures from the game, which resulted in a Parliament win.

Position at the end of turn 1 with my right wing parliamentary cavalry handing back to create a difficult target for the numerically and qualitatively superior Royalist horse. 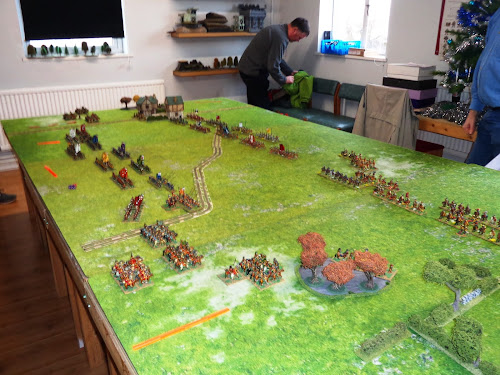 The defile of death where the Royalist cavalry were caught in a crossfire by the Roundhead cavalry and then routed in succession by Hazelriggs Lobsters, the one decent Parliamentary cavalry unit. 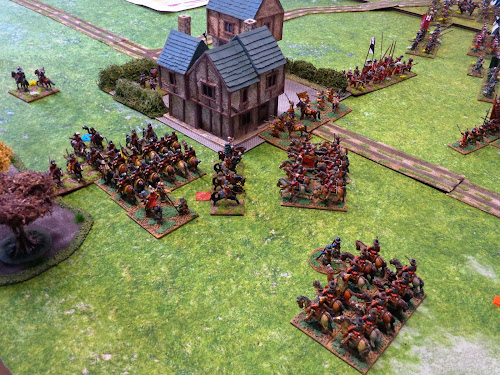 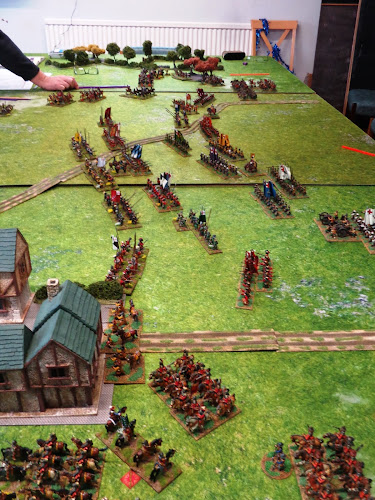 My cavalry get into action, but on my terms so the Royalist can't all attack me at once and I managed to jsu hold the line till the Royalist army broke. 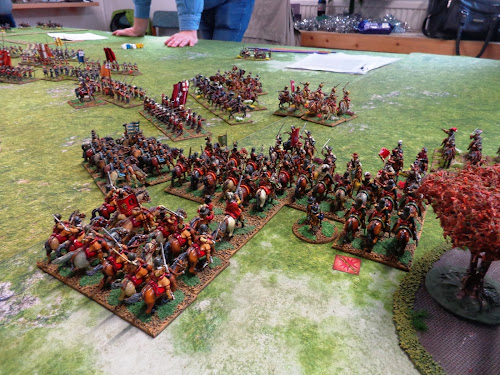 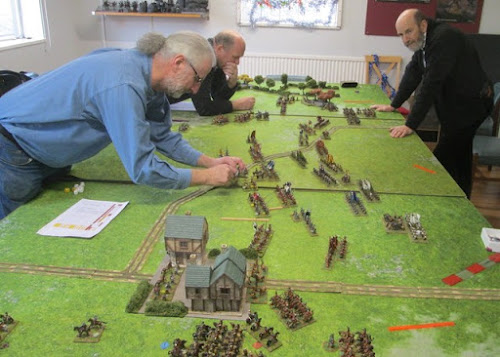 The last of this years painting bren and scout carriers for my BEF. They are marked up as the 3rd Division bren carriers (rear) and 1st Armoured Division scout carriers (front). There are no arm of service markings yet as I haven't found any with the correct numbers. 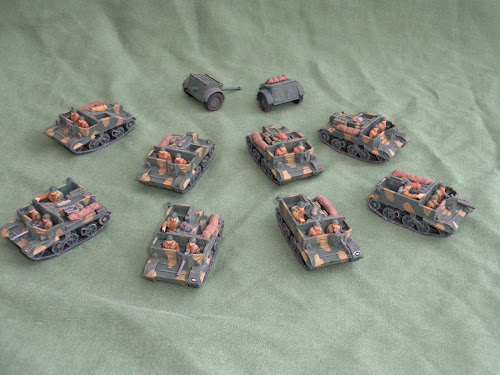 In the background are a couple of 25pdr limbers recovered with the wheels from BPM.

For those interested in the quality of the 3D printing from BPM here's a close-up. I tried to dry-brush along the grain of the printing so it didn't show up too much. 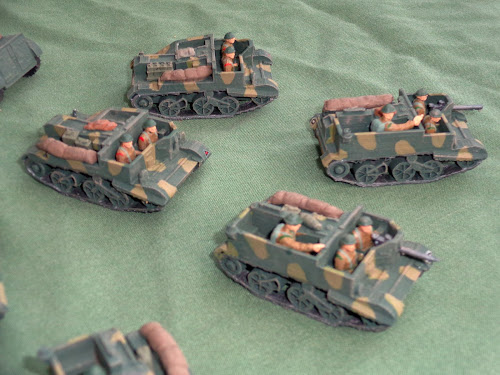 Crews are various figures recovered from the old Airfix universal carrier set!
Posted by Fire at Will at 10:44 2 comments:

While rummaging through the B&B at Recon I was surprised to find the old Esci model, so I had to buy it. I had discovered in an earlier Battlegroup Torch game that a recon team came with this and a bazooka, so I can now fulfil that need. 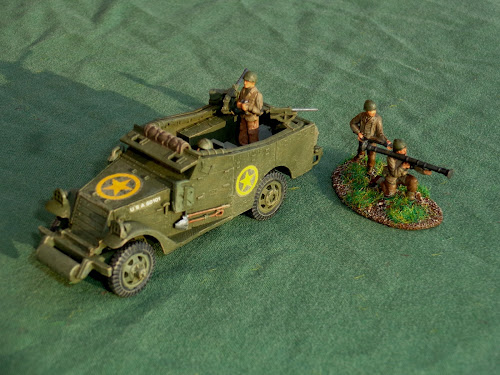 The crew with the kit were far too large, but I found a couple of suitable figures in my bits box.
Posted by Fire at Will at 07:13 2 comments:

A few old damaged models brought back to life. The Humber Mark II is the old Matchbox model, I stripped off the old paintwork and was debating back-dating it to a Mark I, but decided I needed to attempt that with a fresh model. 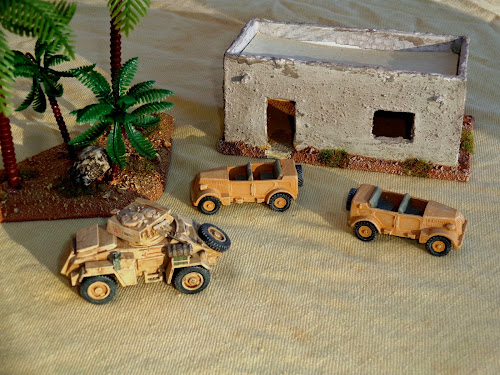 Also a pair of Fiat 508C from the EWM rejects box, various holes filled and wheels added makes useful bits for my Italians. I just need to find some suitable crew figures. The wheels were from BPM the 15mm version for the 25pdr works well for light vehicles.
Posted by Fire at Will at 06:53 4 comments:

I've assembled a selection of the Valiant infantry carts and they are all fine except for the oversized figure. I used three to make up some loader teams with old figures and the other two to make a supply wagon. The collection of Panzerschrecks makes it quite intimidating. I also rebased some spare gunners as loader teams and some old bailed tank crews. 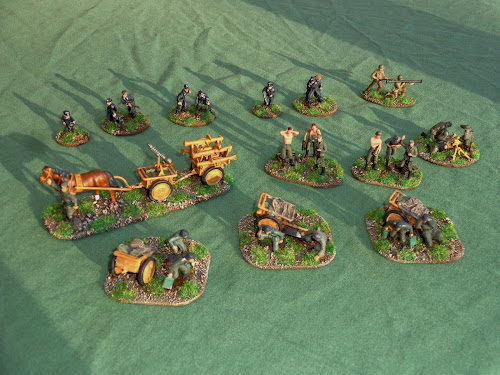 The odd horse handler comes from a Strelets police battalion. 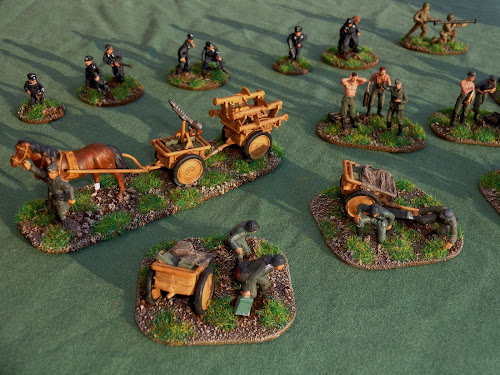 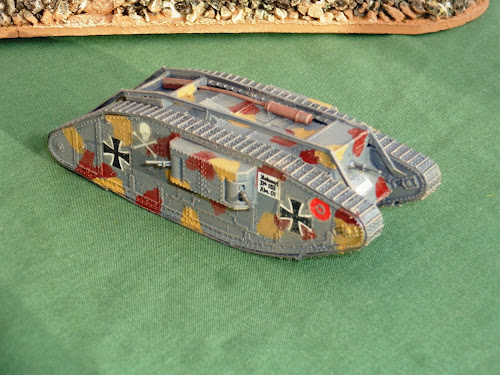 They were certainly used by the Frei-Corps post war, so it will certainly get used in my Russian Civil War games 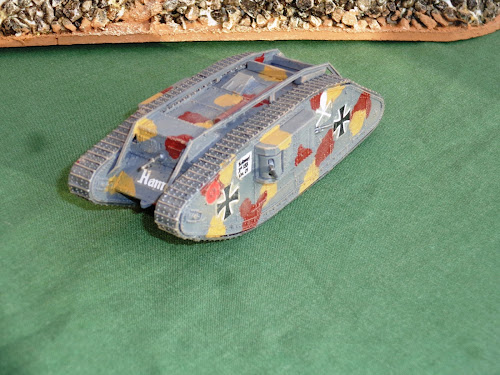 I picked up a set of laser cut Italian telegraph posts from my mate Simon R at Recon. These have now been painted up ready for use in Sicily. Not displayed on the right coloured cloth 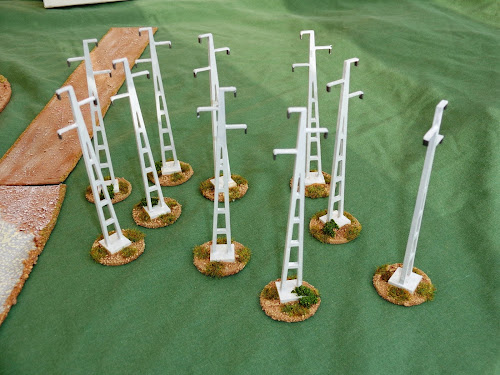 A bit more like they would appear in use 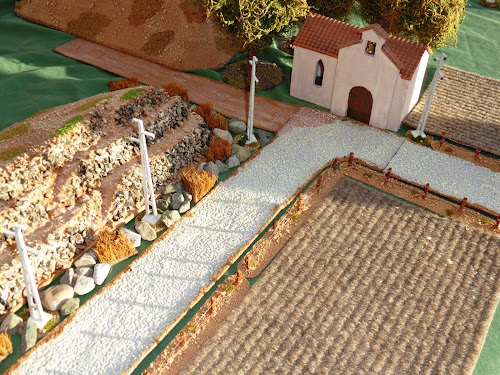 While sorting out the vehicle crews I realised that I had a couple of motorcycle combos that needed passengers, then on checking the new RF blitzkrieg battlegroups book I found I needed three more motorcycle combos to make up a full battalion. Luckily I found two Matchbox and one Zvezda combo in the stash. So they were painted, etc and I also rebased the remainder.

So here they are, Zvezda on the right, the new ones are at the front. 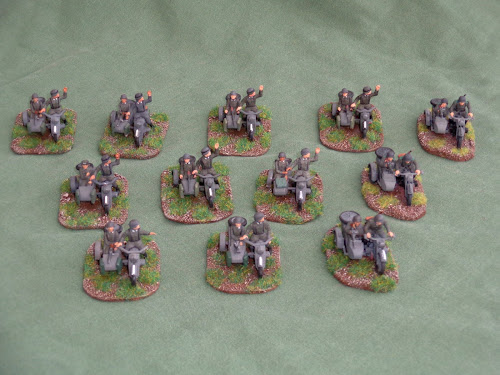 One has had a 50mm mortar added as required by the orbat.
Posted by Fire at Will at 12:54 No comments:

A couple of months ago I successfully used a couple of M3 75mm GMC as substitutes for the T19 in a game, so it was only fair tat I added a pair to my army. it's quite a simple conversion using the Italeri M3 75mm GMC as a base and replacing the 75mm's with 105mm's from their Priest kit (thanks Bob M) 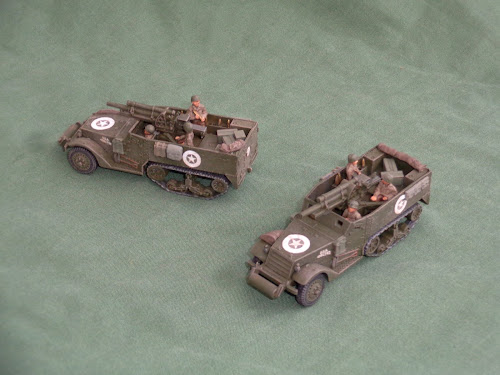 Unfortunately I left the raised internal flooring from the M3, which made it difficult to fit the crew and I think in retrospect is wrong for it too. So if I were to repeat the exercise I would cut off the gun mounting and rear fuel tanks an add them separately.
Posted by Fire at Will at 07:34 3 comments:

A quick piece of work I painted circa 90 figures to crew my early WW2 German vehicles. A lot of repetitive painting. Luckily I had enough figures due to a donation by Peter B - thanks 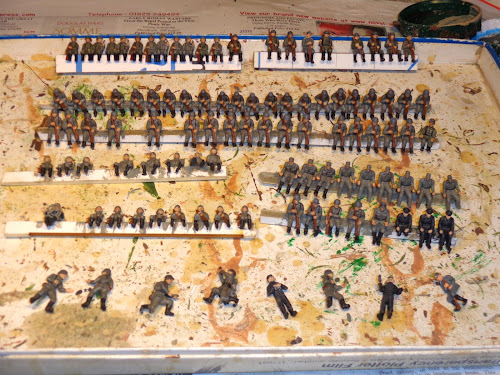 The last of my SYW figures have now been rebased, now it's only the AWI to do, but that's a task for next year.

On the left SYW cavalry and on the left the AWI, although the light dragoons can be used for both. 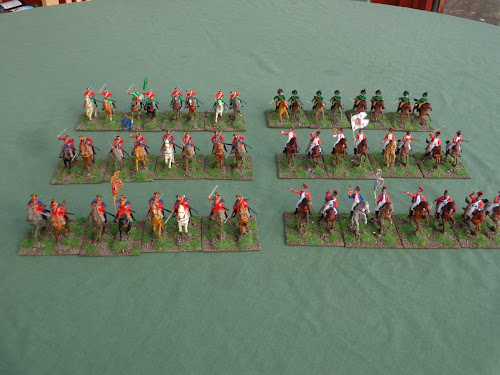 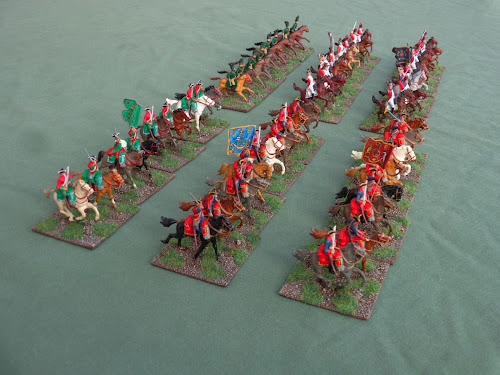 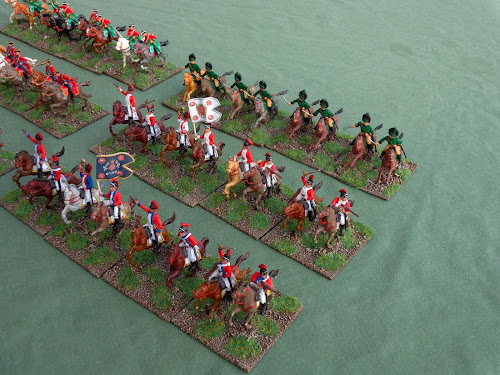 Just completed all four of my Duchy of Warsaw Infantry Regiments using the new Strelets marching figures, plus a few conversion to make up the required number of command figures. I selected the 1st, 4th, 8th and 13th to give a nice range of colours 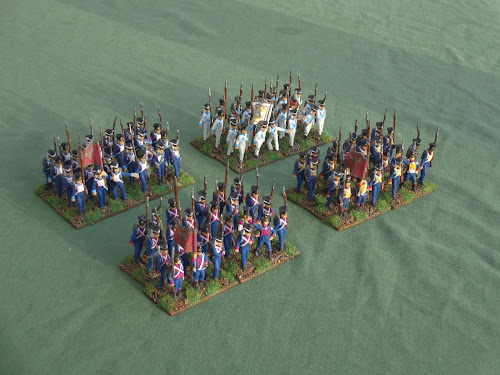 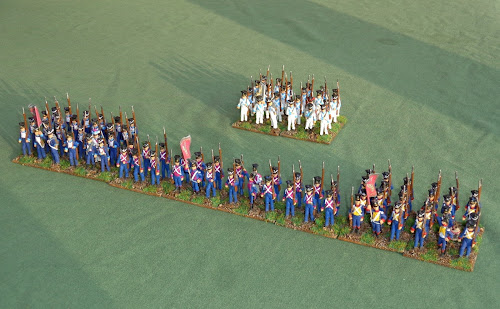 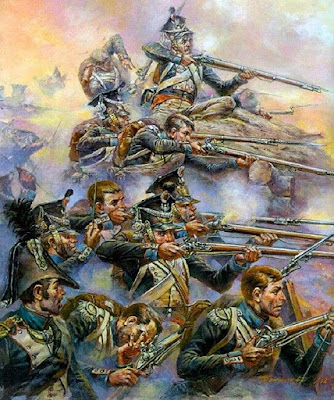 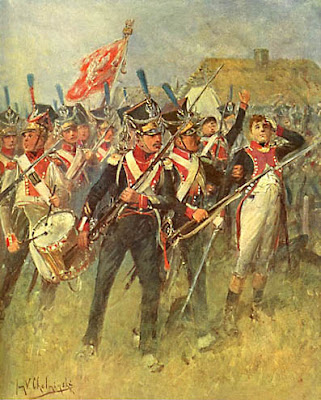 The 4th was picked because it has a reenactment group and also fought in Spain. The 13th is obvious, becuse it was the only white coated unit

After Stockton, we spent a week in the North Yorks Moors before heading home with a stop for the Recon show and participation in the Lance & Longbow game. Luckily I found the way despite the bad weather and arrived in time for the opening.

Today's game was the battle of Lewes 1264, I only took one picture just at the start as the Montfortians started their attack. 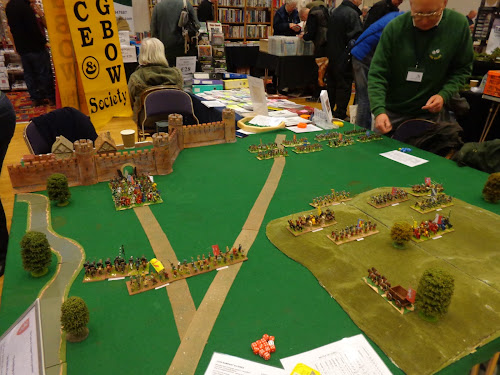 I then failed to take any other pictures of the game or any of the other games, sorry.

My acquistions from the B&B and also what various friends gave me. 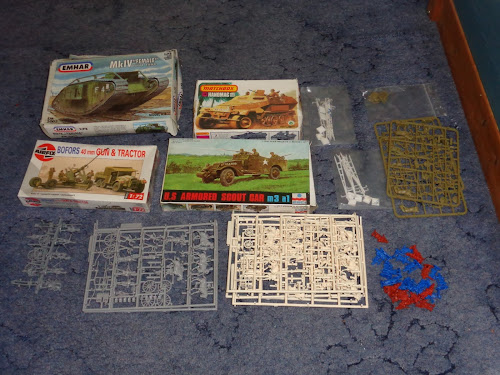 The kits will replenish my kit stash, a pair of Mark IV tanks is excessive given I already have two, but one will become a beute version. The M3 scout car was a great find on the B&B. Bob donated me yet more of the Strelets bonus Streltsy figures, and I received a selection of plastic limbers from David P, very useful. The really interesting item is the Italian Electricity Pylons from Simon R along with some German infantry carts, that will be used for some loader teams for Battlegroup.

It's the big push to get as much finished before year end.


As usual I'll fail to achieve everything I hoped for in the year, but I'll report on that after the year end.