Over on my Frundsberg blog my latest solo campaign is underway. This involves the attempt to invade the Frei Stadt by the French Revolutionary forces and one battle has been fought as the French attempt a river crossing in the same manner as the failed attempt at Huninque in 1793. Various of the characters are taking on a life of their own instead of my original plan for them just to provide context

The are rafts simply made out an old rattan blind stuck down onto card but they are quite effective. 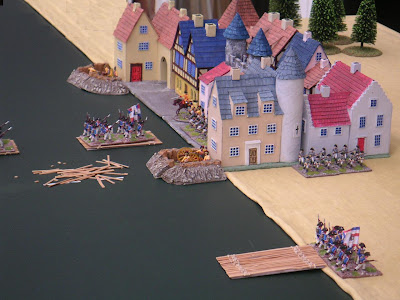 For my next attempt I'll need to contruct something like barges.
Posted by Fire at Will at 15:34 5 comments:

Yes, it's back to the fray after my holiday and since I still hadn't sorted out a minidrill/dremel yet I have kept to the WW2 theme and painted my new Hat British MG and mortar packs.

These will be used to upgrade all the heavy weapons in my four British infantry battalions (for Rapid Fire) and I suspect I'll probably retire my Airfix British or at least downgrade them to 2nd line service. Mixed in are a number of the old ESCI British, which are a close match in height, but the new Hat figures are bulkier and look much better fed/built than most pictures I have seen of British squadies.
Posted by Fire at Will at 15:05 No comments:

Back to the cold wet North West

Yes, I escaped for a week to the warm Canary island of La Palma on a last minute break and spent most of my time walking around and over volcanoes. The capital has some lovely old buildings and particularly a folly of a fortress overlooking the harbour. There is a real one but it is not so impressive. 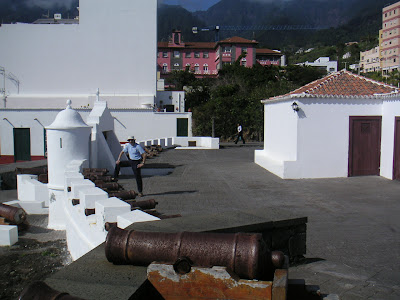 I was deprived of Internet access for the week, but I have arrived back to a load of goodies from Harfields (and no snow), there was:

The RCW figures should neatly round off my RCW forces, while the new Hat british heavy weapons will upgrade my existing British units, but may mean I decide to upgrade some of the figures, but not my original ones from Almark!. I'm undecided about the Austrian wagons as I would like to use them for the SYW, but I need to find some evidence first before starting.

The Strelets Court and Army of Peter the Great was bought for all the character figures but I was pleased to find that the infantry figures would be more than sufficient to produce a couple more WSS regiments, plus the Guards box contained a very useful general figure.

A while back when I painted my first dragoons someone asked if I was going to make some dismounted ones as well. At that time I wasn't sure what I could use, but once I got the Strelets GNW Russian Dragoons they provided me with three dismounted figures. I then compared these with the Strelets Swedish Infantry and found that those without the turned back coats could be used as Dragoons. 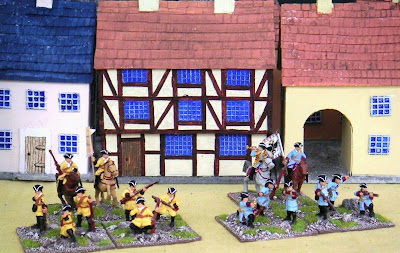 So here they are, my first two dismounted units. The mounted command stands are from the relevant mounted unit.

For a quick painting conversion I think I was quite lucky, I now need to find some more suitable figures for the other regiments.
Posted by Fire at Will at 15:13 1 comment:

A quick diversion from my usual themes is the painting of some Militia for my Imagi-Nation the Frundsberg Frei Stadt. These will be used in a planned French Revolution era solo campaign to be reported over on my other blog. 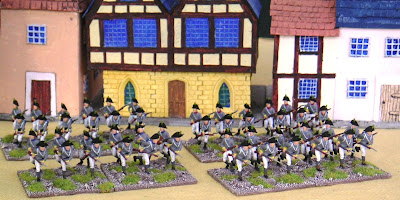 As per the previous post I was well ahead on my December so I switched to something different kicked off the month with 1940s French. My main plan for this month is to paint all the Minimi vehicles that arrived last month, however I need to invest in a mini-drill/sander to tidy up the mouldings.
In the interim a couple of ideas have emerged and moved straight to the painting table. Firstly some extra French Revolutionary wars infantry and then some more WSS infantry, which I have decided can be painted up as dragoons.
Otherwise I plan to have a quick experiment with the Warlord plastics
Posted by Fire at Will at 13:53 No comments:

During the final part of 2009 I felt that I was running out of new inspiration/ideas/periods, but I'm sure the manufacturers will release enough goodies to keep me happy.

1) As this year my intention should be to rationalise the stash again and paint/dispose as appropriate. For those interested, the stash still comprises over 7,000 20mm figures

2) Preparation for Gauntlet and the big game will take priority during the first half of the year. The big game is D-Day and I only have a limited number of new items to paint for my commitment. Gauntlet will be the Rif wars so it will not require a big effort by me, except providing terrain and maybe some rebasing of some existing Bedouin/Rif figures.

3) I also intend to complete anything new that I buy within a year of purchase, a real stretch target!!

Looking at the above I seem to have a clear run until I look at the contents of the stash, where several items really stand out as needing attention and I get a target list something like.

c) Some sort of Arab/Mameluke army for the crusades.

d) Close out the RCW/WW1 period, once Strelets produce their Red Infantry (as if any period gets totally closed out)

e ) Finally build a new 28mm ECW army using the warlord plastics broadly based on Sir William Waller's Western Association army, that fought at Lansdown, Roundway Down, Ripple Field, etc. Unfortunately most of the reference material I can remember is from Bath Library, so I'll have to plan that into my next family visit.

i) whether to start gaming the Sudan, I keep resisting but slowly units keep creeping into the stash

ii) Whether or not to paint my 6mm Ancient Visigothic and Renaissance Polish armies?

iii) Do I build a Jacobite army using the new Strelets figures?

iv) Should I sell off some of my very old figures that I never use?

v) Should I rebase some of my existing forces?

As already mentioned there are the Strelets Jacobites, and the RCW Red Infantry, already in the pipeline are GNW Russian Dragoons from Zvezda, WW2 tanks riders from Hat, plus some very useful 1805 French and Prussian Artillery.
Posted by Fire at Will at 13:53 1 comment:

Last of the old year and the first of the new - I nearly finished these before New Year, but they took until this morning to complete. Based on the last 1940s game I played I felt I needed a few more French infantry and the new figures from Caesar were just the job, nice crisp mouldings. The downside was the complete lack of any heavy weapons, so I raided my last pack of Revell WW1 French to provide a couple of MMGs, I also added a few other figures that seemed useable.

While basing I found I needed some extra figures so I raided my existing army that uses Esci WW2 French for the few I needed.
Posted by Fire at Will at 11:20 No comments: