Palm trees for the Tifaruin game

Quite a simple task, but quite time consuming given that the hardboard (MDF) bases had to be cut then bevel all the edges and finally holes drilled for the trees. The trees themselves are the last of a large batch I bought from Sugarcraft in the US. Basing is just some larger stones from the garden, plus coarse builders sand all fixed down the same as my usual bases. 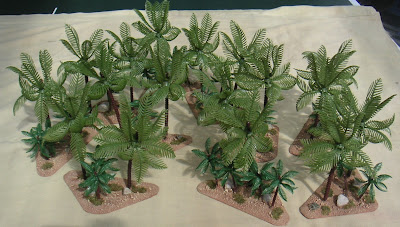 More on the SOTCW Tifaruin game here
Posted by Fire at Will at 17:52 5 comments:

First Germans for the Big Game

Since getting back from Skye my first priority has been sorting out my Germans to provide the defenders for Sword beach. I decided to rework and rebase my Revell Panzer Grenadiers plus a few other odd bits.

Here is the work so far, I still need to add the Festung paks, another MMG, tobruk crews and some panzerfaust markers.

In addition I also upgraded my German prisoners, just for a laugh

A quick Hi from Skye. Enroute I managed to pop in to the Falkirk show for a couple of hours and met up with a number of characters including Phil Olley. Here's a picture of his Thirty Years War game. 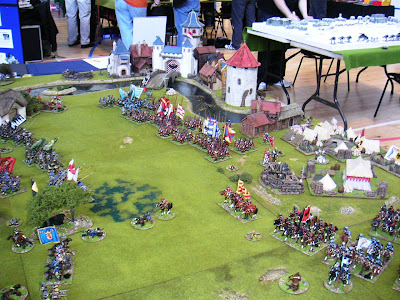 I picked up a few boxes of cheap figures mainly for my French Revolution games and a Befehlspanzer I from Frontline otherwise a cheap show.
Posted by Fire at Will at 07:13 3 comments:

Having played a few games of Black Powder and in my view the emphasis is definitely on the fun/game aspect and it produces a result reasonably quickly. It has nice touches but history certainly comes second.

I decided that using dice by the units to track casualties was not very appealing. Therefore I created a number of more appropriate real casualty counters that allow me to track up to three casualties with one counter depending on how it is positioned 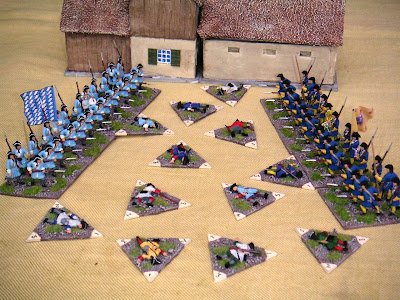 Luckily there were a lot of surplus artillerymen from the two Zvezda GNW artillery sets and some could be cut flat enough to be used as casualties.
Posted by Fire at Will at 16:49 5 comments:

Slight change this month with a (almost) two month target. This fits in with the need to prepare for the two games at the end of June and the fact that I'll be away for a while tramping the Highlands contemplating the purchase of Strelets Jacobites (or some such). So

The big game - I'm the German defender on Sword beach on D-day and I still need to:

Then there is Gauntlet. the Rif Wars game where I am mainly providing the terrain so I have to provide:

Then there are the various left overs I've not yet completed:

I got all my late war Germans out yesterday, it's was frightening to see how many I had when they were all laid out on one table. I did it as part of getting ready for the big game because I needed to decide how I would source the figures I needed. Also in the back of my mind was the feeling that the collection was in need of some culling, especially if the new figures from Plastic Soldier appear.
So here are various pictures of the army laid out with the armour to the left, infantry to the right. Reece to the front and artillery to the back. 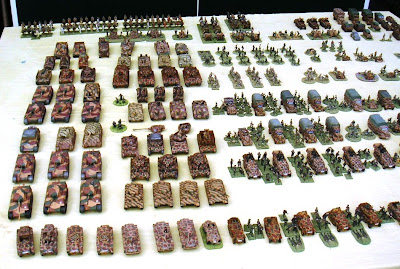 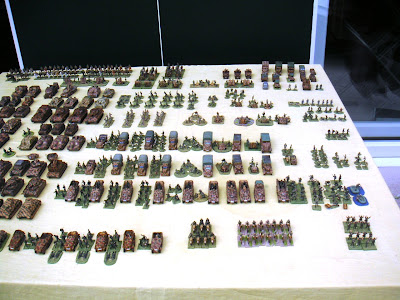 One obvious conclusion was the diversity of style given the collection spanned over 40 years collecting. It also confirmed my view that the newer washes I have been using are darker than the past. 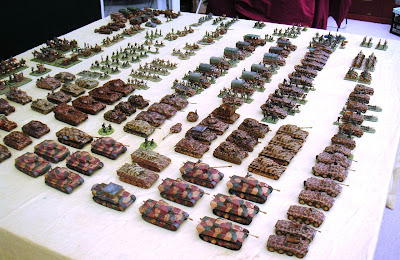 I won't identify anything, but if anyone what's to know about specific figures/vehicles leave a comment. The vehicles are predominantly Airfix, Matchbox, Frontline and Fujimi, and the infantry Airfix, Revell and Hat. 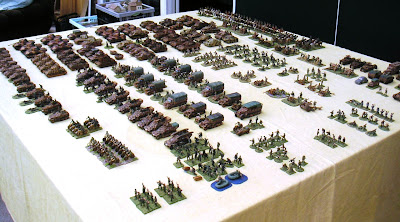 While the artillery continued firing on the enemy Captains Hubertus and Von Stamm found that they had time to settle their differences in the traditional way. 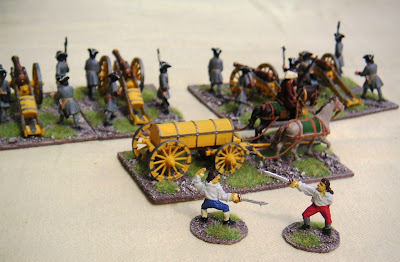 Yes, I have finished the first of the figures from the Strelets Court of Peter the I
Posted by Fire at Will at 20:42 3 comments:

Last of the Ottomans

Well two weeks ago I discovered as I neared the end of painting the Janissaries that one figure was AWOL. so I put the rest to one side until the figure turned up again. It was only when I lost the part for the 251 that I found him again. So at last here is the Janissary forlorn hope/skirmisher unit. 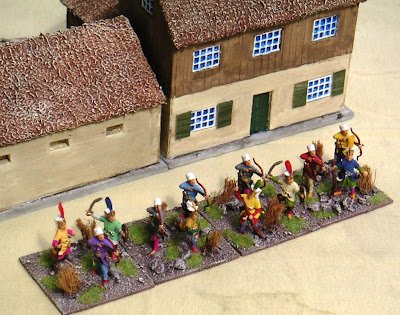 Just finished these by the end of the month.

First off is a Sdkfz 251 with wurfrahmen. This was quite a chore to build and I don't think I'll try matching up metal and plastic at this level of complexity again. The base model is the old Matchbox 1/76 Sdkfz 251 Ausf B like the rest of my early war collection combined with the SHQ wurfrahmen kit. The two were not a perfect fit and I had to make a number of compromises to make this up as a robust model. At one point a part went flying and luckily I managed to find it the next day. Phew! 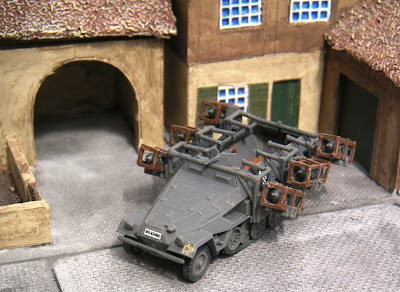 Next is one of theose Panzer rarities the Neubaufahrzug or "New Construction Vehicle". Only 5 were made, but at least they saw action in Norway when the replaced a light tank company that had sank en-route. This is a Milicast version picked up cheap at South Cheshire Militaire. 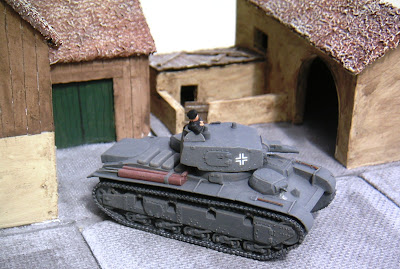 Lastly the beginnings of my forces for this summer's big game a pair of Festung Pak 50mm from Brittania. I still need to buy another couple of these.