Tidying up the "French" Artillery 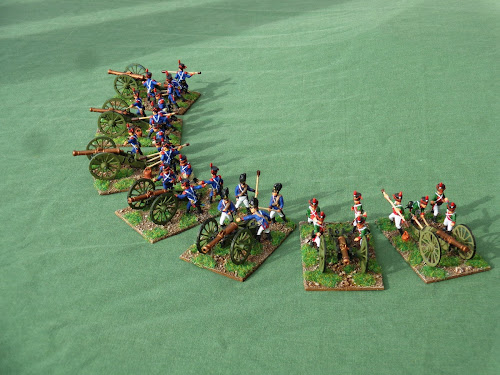 In reverse. Note I have not bothered with the packs and trimmed back the straps to look sensible. 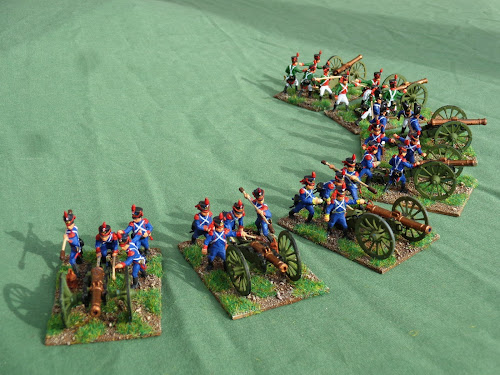 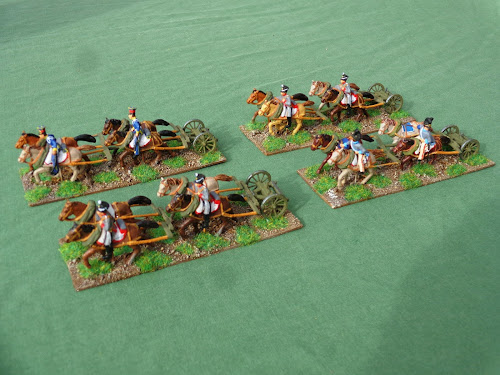 A second batch, nearest are Imperial Guard Foot Artillery, then Neuchâtel, then a pair of French caissons that I trimmed back to two horse teams, except I did't. I painted two new "limber" teams for the caissons and reused the existing limber teams for the guns. 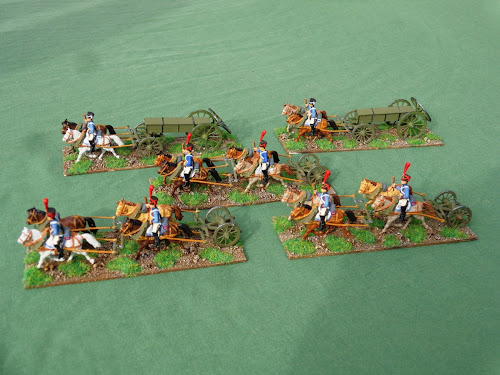 Of course you realise once you have done this that you need to upgrade the basing on the rest of the artillery!
Posted by Fire at Will at 07:36 3 comments:

A blast from the past

While working on my Ox Wagons I also rebased my venerable Jacklex British 4.7 inch Naval gun. 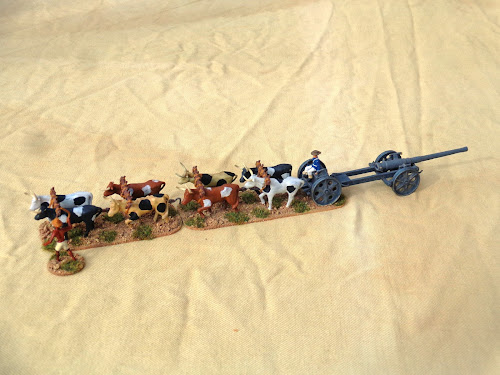 Although I do have the gun crew it has always been used in games as part of a convoy.

More details about the gun on Wikipedia
Posted by Fire at Will at 07:01 3 comments:

When I worked on the Hat Colonial wagons back in March (link) I complained about the lack of Oxen and that I would reuse my old Atlantic Oxen. I also decided that I would rework a couple of the old wagons, rather than buying any more of the Hat version. So here they are together with some reworked Ox teams. 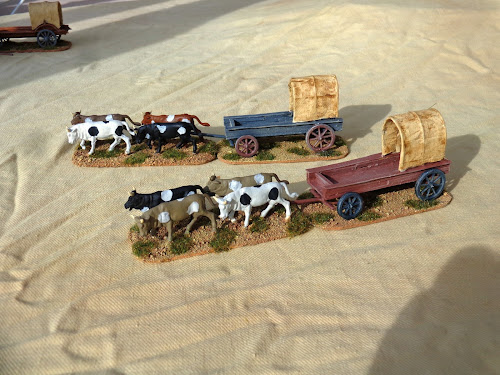 Here'e the original wagon on the left and the reworked version on the right. The HaT version is behind. Only the wheels and axles were used the rest is scratch-built. 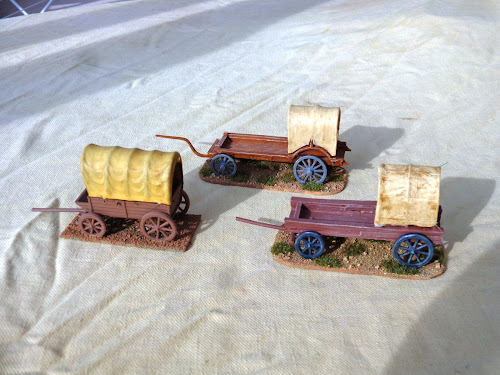 Got through these relativity quickly once I got going. These are the marching figures from three boxes of Italeri Russian Grenadiers, which are the only ones that would fit on my Napoleonic Infantry base sizes. 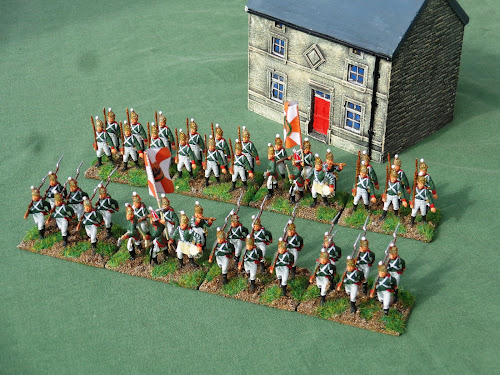 Hurrah, my operation was on Monday and after three nights I was released from hospital. So after catching up on much needed sleep my trip to Britcon was on. There isn't much eye-candy but it was a nice to get away.

Obviously I was involved in the Lance & Longbow game, the battle of Clifton a what if set in the Roses period. 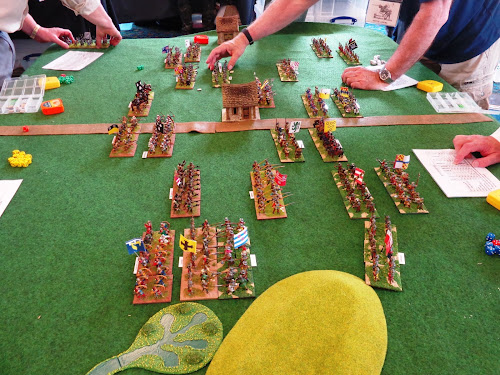 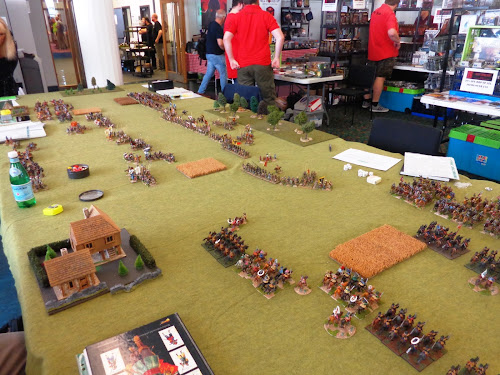 I was quite taken by the tessellating tiles from Sarissa, especially the way they had been used for a coastline 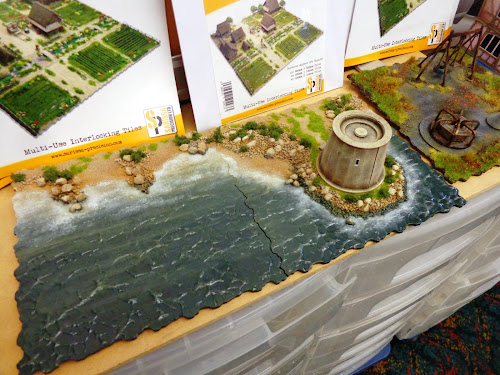 The limited booty, mostly from the B&B. I hadn't intended to add any cavalry to my 28mm Spanish forces, but a complete box for a fiver was too tempting. 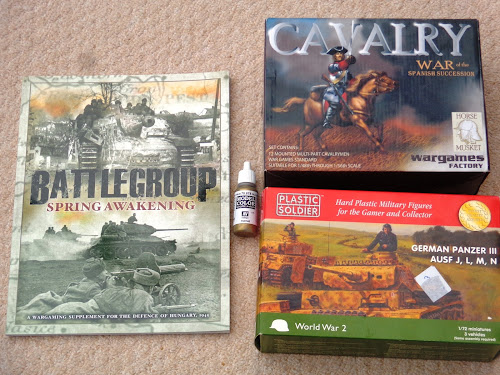 More disruption as I have a prostate operation this month so I've decided to work on what remains from last months list and then do whatever I feel like with any remaining time.


I'm hoping that my operation doesn't involve to long a stay in hospital/recovering as I'd like to get to Britcon next weekend.
Posted by Fire at Will at 12:24 1 comment:

Just in time for the month end I finished the other two Hanoverian units. As before these are the RedBox Jacobite Rebellion British Infantry. AS there were insufficient grenadiers one unit does not have any and a missing standard bearer has been replaced by an old Airfix AWI Grenadier with a head swap. 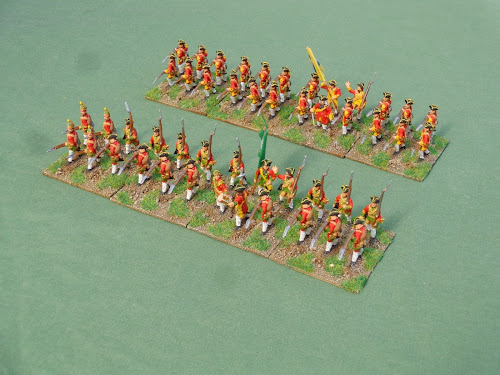 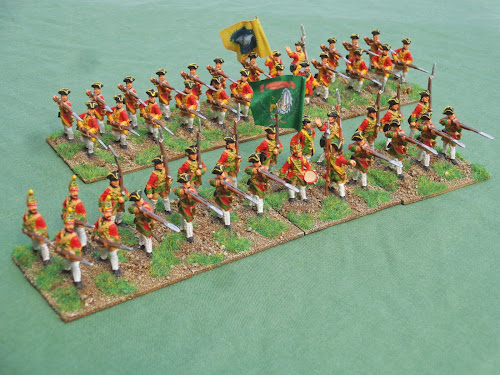 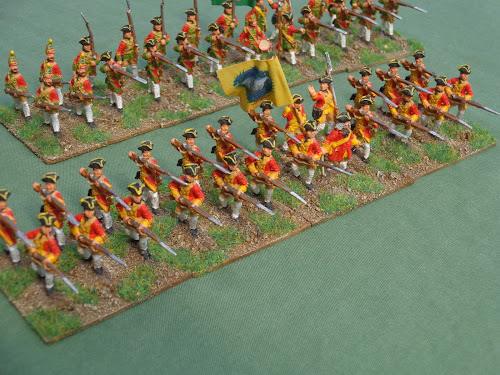