I had a certain amount of Normans based up for some Warmaster type rules using the Revell Normans, plus the original Strelets Norman cavalry. When Strelets released their new sets I decided to add them to the army and upgrade it to make a WRG 6th edition army. The new figures are an improvement on the originals, the only real fault is the shield patterns being embossed on the shields which limits the painting possibilities.

Below the Normans drawn up in wedges, and usual I replaced the lances provided with florists wire and added pennants from paper. 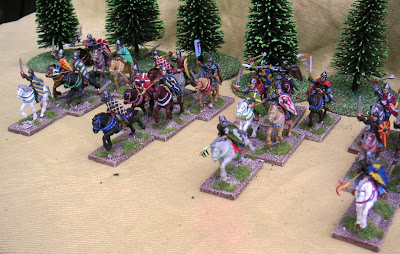 The Bretons. There is a lot of character in this set and they can be mixed in with the Normans if necessary. 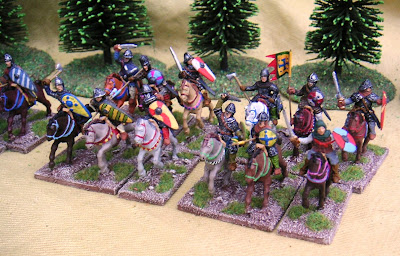 All that is now needed to complete the army is to rebase the archers as LI and it's done. Well at least until their first outing then I'll probably make some changes.

It's that time of year again, so I'm thinking of 2008 targets. I've got quite a lot on the go already, but here are my current projects/plans


Of course, all this will be heavily dependant on activities in the real world and the release of new figures, rules, etc.

After more than 35 years painting my collection of 20mm figures has now reached 20,000 with the completion of some Norman and Breton cavalry (pictures to follow soon). I would have reached this figure earlier if I hadn't sold my Napoleonic Russian cavalry.

The breakdown by broad periods is

Trouble is that it's a long way to the next milestone of 25K, so I won't achieve this for quite a few years.

Well, I must of been good this year because there was a pile of wargames goodies by the tree this year! They are mostly on a medieval theme so I am sure that 2008 will see at least one medieval army completed.

What did I get?

So this means I'm ready to build both a HYW English Army and Teutonic Knights and possibly some variants on them. The Muslims and Arabs will be used with my Ottomans (mixed in with other figures).

I also received the Osprey British in the West Indies book, so there is a future option for my French in Egypt army to fight there instead, especially as the British army in Egypt was similarly dressed. 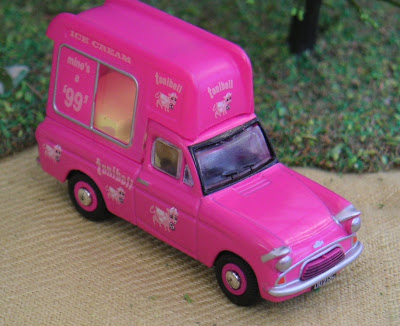 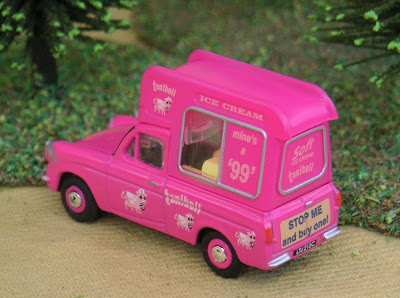 Hoping everyone has a peaceful Christmas.
Will
Posted by Fire at Will at 13:46 1 comment:

WW2 French and US Softskins

Some more of the BP Casts I picked up over a week ago. The first is a Dodge Ambulance, certainly one of the better BP Casts, the only problem was the thickness of some of the wheels, I balanced them up but they are still oversized. Having found a picture of one of these in the new Rapid Fire book, I'm quite pleased to have got one. 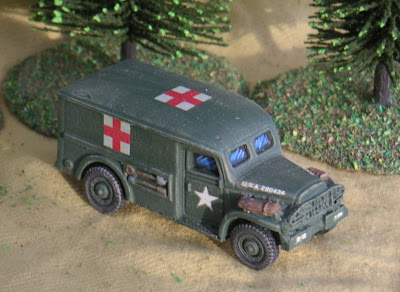 Two Peugeot DMA trucks, much poorer moulded detail and the same problems with filling of the wheel mouldings. This vehicle only started production in May 1940 so it is unlikely any were used by the French in combat, however I'm short of typically French vehicles so these will provide some necessary transport and look the part. 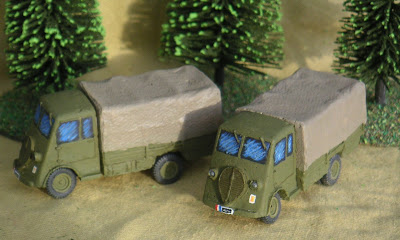 Christmas is here, I arrived home yesterday to find the book left by the postie, so I'm going to spend the next few days reading and re-reading it

There is lots of good stuff, and plenty of eye-candy

Some new orders of battle, I'll have to get some more WW1 German 77mm guns for my Volksgrenadiers, and conveniently I've just bought some RSOs, which are also needed. There are some additional scenario specific additions to the rules and the first scenario has more details on playing a divisional level game.

I would have liked to have seen more on modelling the figures, vehicles & terrain. but if the choice is that or a scenario then I'd choose the scenario. Hopefully some of this may appear on the RF site over the coming months.

Just finished the book and it's a cracking read. It gets down to the nitty-gritty of the 3 Para battle groups operations in Afghanistan. It covers both the operations and the political dilemmas behind them. It puts the recent operation to re-capture Musa-Qaleh into perspective. It should become a classic. From a wargaming perspective there are plenty of possible scenarios that can be used from simple patrolling to all out Taliban assaults on the "company houses".

I got my copy from the library, but there's a good deal at Amazon.co.uk with plenty of reviews.

While preparing for the "With Desaix in the desert" test game, I realised that I hadn't sorted out any artillery for the French, so I had to sort something out. It wasn't needed for the game as Desaix only had a couple of guns (I need to double check this), but for any other games they certainly will be required.

The figures are basically Esci French Guard Artillery gunners with the bearskin head removed and replaced with bicorne heads from their Prussian Infantry (part of the old Prussian/Austrian pack). The guns are from the Esci Crimean Russian Artillery. They look just the business, so I'm sure they will be used in the next test game.

I got this one completely wrong. It's one of the BP Casts I picked up recently. 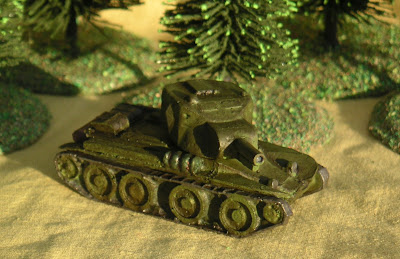 While waiting for other figures to dry I decided to get on with this vehicle as it seemed to be just a variant on the BT. On finishing it in my standard Russian paint scheme, I checked the web and found the BT 42 was a Finnish variant, using 18 captured BT 7 chassis's and mounting a British 4.5" howitzer. I don't have any Finns and rather than repainting it I'll use it as a BT 7A , which mounted a 76mm howitzer. The other problem was that my usual dark brown wash also dried quite dark and has hidden some of the detail rather than highlighting it.

The final "cavalry" unit for my French army in Egypt is the 18th Dragoons, who fought at the Pyramids, Syria, Siege of Acre, Mont-Tabor, Damietta, and the conquest of Upper Egypt.

There were five dragoon regiments involved (3rd, 14th, 15th, 18th and 20th) and three of these had pink facings so I selected the 18th as being fairly representative. The figures are the standard Hat French Dragoons, with no changes needed to reflect the campaign, but I'm sure they would have avoided wearing a metal helmet as much as possible in the heat.

If I can find something suitable then I'll be tempted to make the Dromedary Corps, which may or may not be considered cavalry.

Another item I obtained via the Trading department has been finished, these are the Orion Red Army 1st cavalry army, dressed in the characteristic budenovka . This is my second set so I've now got more than enough Red/White other cavalry as I'm using a lot of the Strelets WW1 Russian Cavalry. 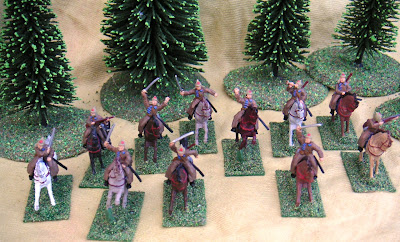 I've still got some more WW1 Russian Infantry that I can use as needed, but Im currently keeping them as a reserve. The only things I still would like for the period are some red infantry in the budenovka and some suitable generals/commisars.
Posted by Fire at Will at 21:22 No comments:

Xmas party at the club

It was our annual Xmas Deeside Defenders meeting last night with a free bar and Indian food. A great time was had by all and I won a pack of FOW (Valejo) paints in the raffle. I just missed out of the WW2 version of "Wings of War", shame!.

ID gaming from St Helens was there with a rummage box of BP Casts stuff and I picked up a selection of various bits and pieces I "need" for my WW2 armies, which will appear over the coming months. The bits included the 20mm AA guns and artillery crews I needed for my Western Desert Italians.

Also played the first working draft of "With Desaix in the desert". Everyone liked the eye candy. The rules worked OK, but there are lots of bits needing tidied up/recalculated/rebalanced. Certainly something to work on over Xmas.

I've just finished off a couple of the WW2 bits, firstly a Panzer II that I acquired as a trade, it was a bit the worse for wear, but I've managed to get it back into a form that it can be used for gaming 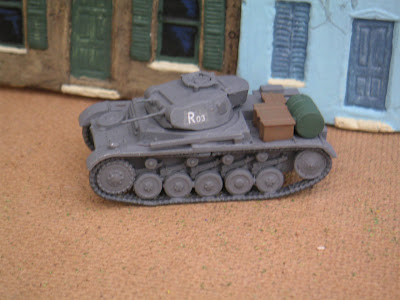 Secondly, the Italian artillery for the big game next year. The guns are the Hinchliffe range from Skytrex and comprise 2 x Ansaldo 75mm sield guns and 2 x Schneider 105mm field guns. 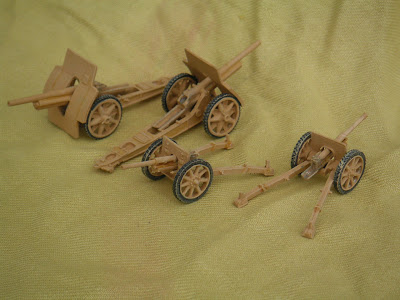 I still need to find some suitable western desert crew figures, and I may still buy a couple of Skoda 100mm field guns as well

So I now have an army to face the French in Egypt. The Mameluke cavalry has been made using the HaT Napoleonic Mamelukes, they are a bit too consistent as they only reflect one style of Mameluke dress, but they are all that is easily available in plastic. There are some suitable sets to provide additions planned, but I was not prepared to wait. Probable other additions over time will be some Bedouins and perhaps some Turkish infantry. 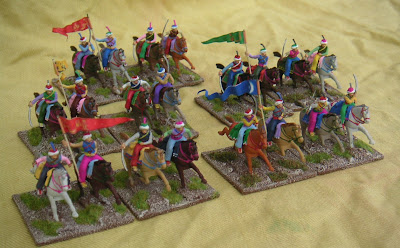 The front right hand unit has a different type of static grass, which I tied to see if it would look better for desert/arid conditions, but it's not pale/dried out enough.

I've now got to write up the rules. They will be an amalgam of my AWI and Zulu rules and the working title will be "With Desaix in the desert"
Posted by Fire at Will at 14:38 No comments:

WW2 is back on the agenda!

The Battle of the Bulge supplement is in printing so I've put in my advanced order today, looks like being a very merry christmas.

one of the pictures from inside

On the workbench - December

Given I was away for half the month I did pretty well against plan, with only the Mamelukes still to finish, so what's next?

There is still a pile in the stash to do, but nothing else seems to tempt me yet so I'll probably update the plan part way through the month, maybe some more WW2 infantry.