Just finished the last of the current batch of buildings before I concentrate on other topics, such as the Moroccan terrain for Gauntlet. 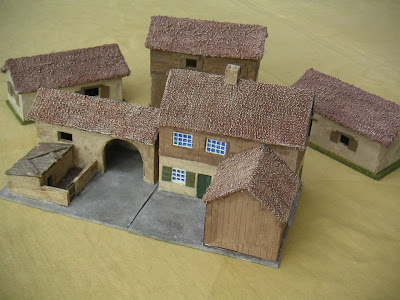 I decided I needed some more rural buildings than could be either used as standalone positions or in combinations. Therefore I created the two farm buildings shown, one very much the farmhouse and the other the stables. 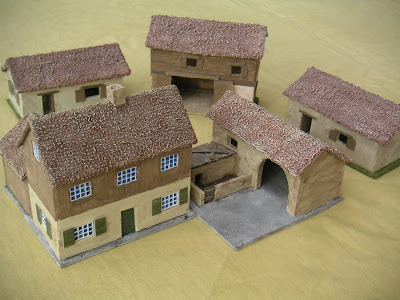 In the background are some I had created earlier for by SYW battles in Silesia. 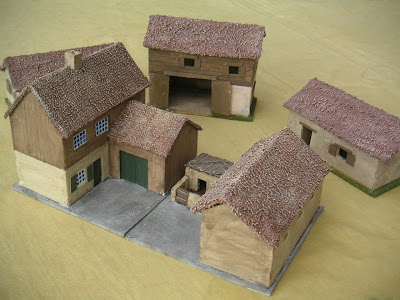 My only regret?
I couldn't find a pig for the sty.
For those that are interested the roofs are made of card with thin towelling/flannel glued on top. This was then washed with thinned PVA to harden, then painted and dry-brushed
Posted by Fire at Will at 20:08 7 comments:

Well the walls are now finished, but now looking at them I feel I still need to add a bit more. The original idea was to build enough so the city/town could occupy an edge or corner position. 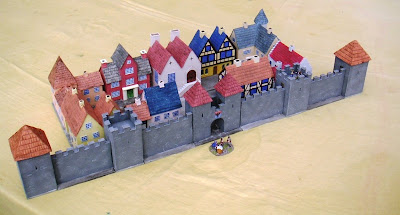 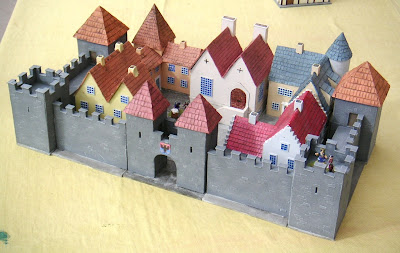 A low level view of the walls

Still I have quite a bit of work to complete over the next couple of months to be ready for the big game and Gauntlet show, so more wall building will be deferred until late summer.
Posted by Fire at Will at 11:45 7 comments:

Well, I took my wife along so it was one day at the show plus more days looking at historical sites and hill walking.

On the way going was Peveril castle near Castleton, combined with a walk round over Mam Tor, an excellent day and quite warm for the season. 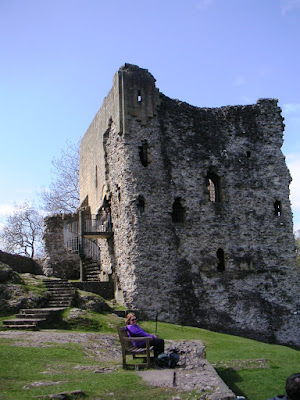 Next was onto Bolsover to see their castle, a real C17 reconstruction of a castle, plus sizable additions. The Titian Cesaers were nothing special, so luckily we managed to finish before the surprisingly early closure (on Friday/Saturday) 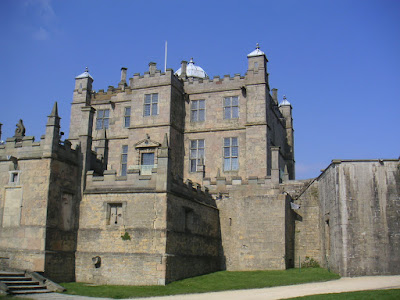 After the Triples it was off to Conisbrough Castle quite an impressive site now the access to the keep has been restored. 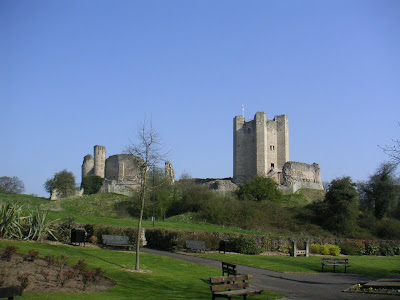 Then onto Brodsworth Hall very much a typical stately home. I was interested to see the original picture of the capture of the Royal Charles by the Dolphin in 1667 in the Dutch Wars 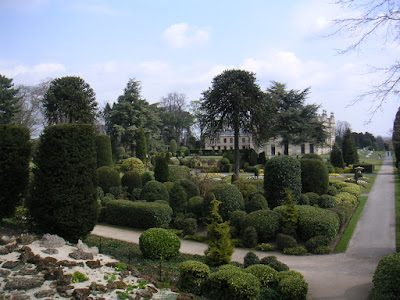 The on a wet Monday with hill fog it was back to Cheshire, missing out a planned trip up Alport Castles (a rocky ridge not an actual castle)
Posted by Fire at Will at 20:43 1 comment:

Some other games I managed to spot.

A WW2 Russian front game game, I like the terrain effect The battle of Granicus by the Ikley lads using Command and Colours, despit being only a short distance away I didn't manage to keep track of the action. Certain pieces of terrain marked the hex limits/corners 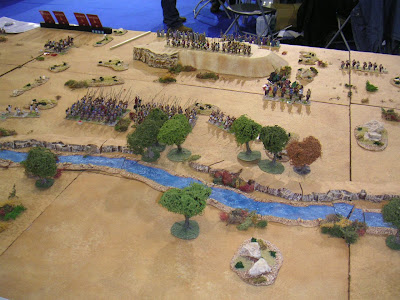 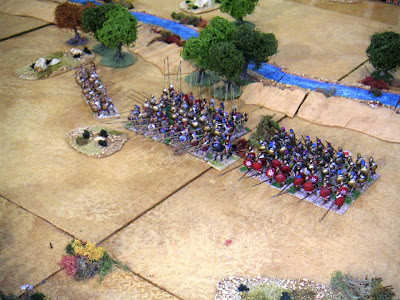 Yes, just back having combined the show with a long weekend. I was only there for the Saturday, but I was impressed with the venue with the sole exception of the B&B, which was far too cramped. That said I did manage to pick up the first dozen copies of Battlegames and some more plastic bicorne infantry. The former really pleased me as I was put off subscribing to the initial issues because of previous magazines folding taking my money with them, then it was a case of never getting around to it. The bicorne infantry came in a mixed bundle of other figures so they will go into my for sale box.

For those who were there the game was Pfeddersheim 1460 (of which I knew nothing before I arrived) but put simply it was a battle between two German armies both with war-wagons. It was put on by Bob from the L&L with an impressive array of 28mm kit.

My force arriving on table 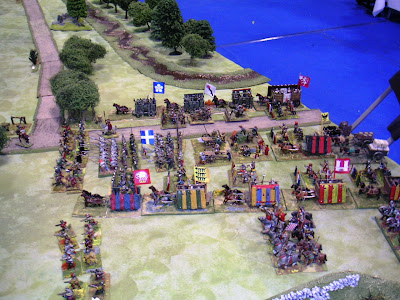 The enemy deployed in wagonburg blocking my force from.... 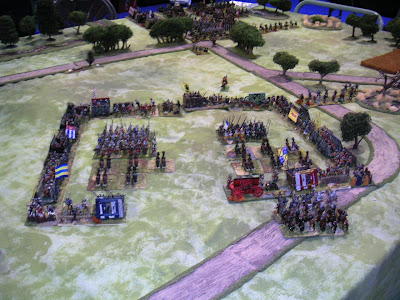 ...the relief of Pfeddersheim 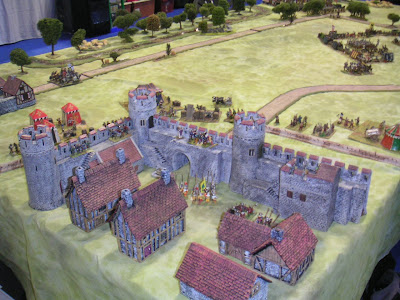 It all got very messy and the wagons are not the most mobile bits of kit. 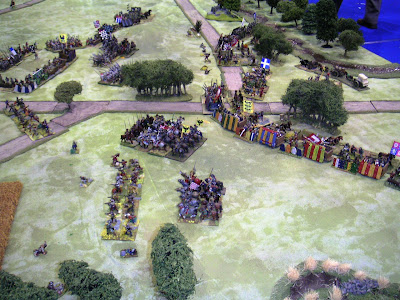 The final stage as the enemy cavalry took my pikes in flank, just after I had done the same to a unit of their cavalry. 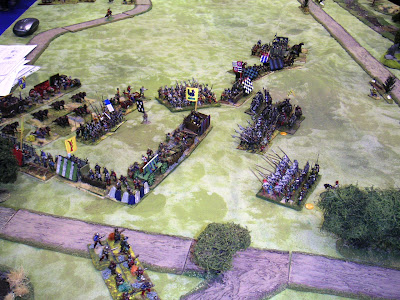 From this point on it was clear that my relief force would not get through.
Posted by Fire at Will at 20:53 3 comments:

Well I'm off to Triples tomorrow and also visiting a few English heritage sites in the area in passing so there won't be much activity for a while.

If you are at Triples then pop by and say hello. I'll be on the Lance & Longbow stand on Saturday wearing a black Deeside Defenders shirt.
Posted by Fire at Will at 15:06 1 comment:

Well, I thought I had finished with my Janissaries as I prepared to base them up. However I found that one figure was missing, so that the unit of skirmishers is still waiting until be turns up.

For a change and also why these took loker to produce I painted them up in random colours. There does seem to be some debate as to whether the rank and file were uniformed. Certainly there were bulk issues of cloth, but what happened to it then is unclear.

The other reason for the change is that this unit is almost entirely equipped for close quarters fighting with the majority having sword and shield. 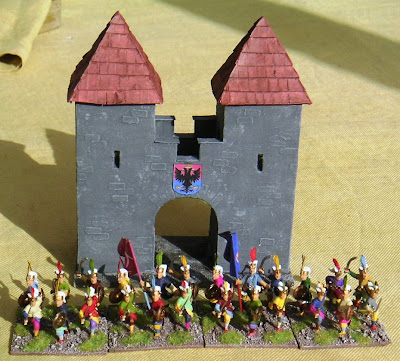 In the background is the first one my additional buildings, a new gatehouse for my city walls.
Posted by Fire at Will at 15:02 1 comment:

After the guns, here's the limbers and caissons.

These really are nice models, but to give some variety on the 4 horse teams I mixed in some horses from the Russian set.
Posted by Fire at Will at 08:20 5 comments:

Over two years ago I completed my first Austrian artillery using the Strelets figures (link), but since then I have added more gunners using the Zvezda Russian Artillery. Once the Zvezda Swedish Artillery appeared the obvious action was to replace my older figures (or at least move them into reserve) 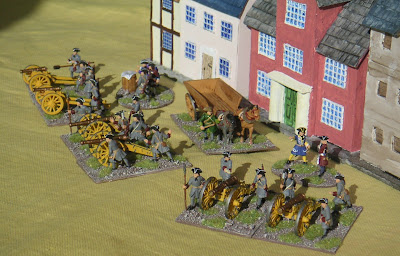 I created three two gun batteries, from front to back.

I also created a couple of command vignettes, the Swedish officer is really good in combination with the Russian officer with telescope 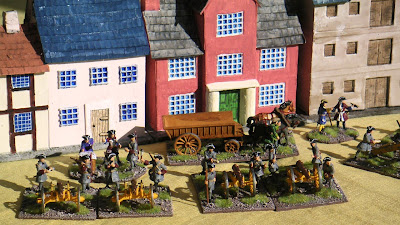 Finally at the back is a baggage wagon based on an old Airfix Waterloo Accessories set with just a Swedish figure added.

Overall they new Swedes paint up well, the only downsides are the bases are not smoothed off like their other sets, plus the multipart figures do not fit all that well, hence most of the figures used are one piece mouldings.

I now have to work on the limbers and caissons.

The little and large - Russian armour

Well the Russian armour that slipped onto my painting bench is now finished and will certainly spice up some early Blitzkrieg games.

First is the light armour, a BA64 armoured car (by Alby) a T37 amphibious tank (by Cromwell) and a SU76 (by Red Star) Then the real beasts, a T28 and T35 heavy tanks, both Red Star Models) They will certainly frighten and German player when they first see them, but in Rapid Fire they are only armour class E (the worst) just like all the light armour above. 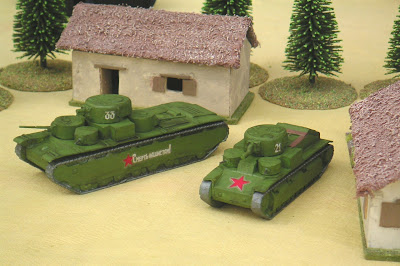 The Alby and Cromwell vehicles were really nice models finely cast and when together easily, hover the Red Star ones were not the best, it took a while to straighten out the track units and there was quite a bit of pitting on the turrets.
Posted by Fire at Will at 14:36 2 comments:

Well as anticipated the Zvezda Swedish Artillery has arrived and It has rapidly jumped onto my workbench, on the downside some items from last month are still in progress. So here's this months work plan.
Posted by Fire at Will at 15:48 2 comments:

Just been down to London for a couple of days and managed to fit in the Imperial War Museum, National Army Museum and a bit of the British Museum while I was there. 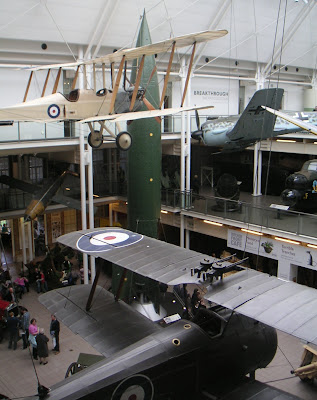 Easter holidays was certainly not the time I would have intentionally picked, all the museums were packed with school parties, families and even mother and toddler groups in addition to the normal tourists. I really enjoyed all three as it's been many years since I last visited, and although I could recognise many of the exhibits from previous visits, it's all so much better presented than 20 odd years ago.
Posted by Fire at Will at 14:51 2 comments: