This is the last of the current series of posts, dismounted Men at Arms as an alternative to using the mounted knights depending on the opposition.

The figures are dominantly Zvezda plus Revell and a scattering of Strelets. The banners are all from Dansk Figurspilsforenings Hjemmeside look under download for a great set of flags.

Now I'm just starting on the last of the medievals, the Strelets medieval levy pikemen.
Posted by Fire at Will at 08:39 3 comments:

Here is the rest of the cavalry for the army - hobilars. For WRG 6th they are classed as medium or heavy cavalry with lance, but unfortunately the figures I have are rather short of lances. 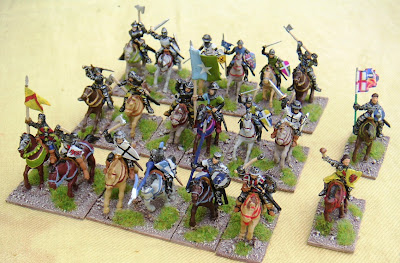 The figures come from a variety of sources many of which are different Strelets sets plus a few Italeri.
Posted by Fire at Will at 07:17 2 comments: 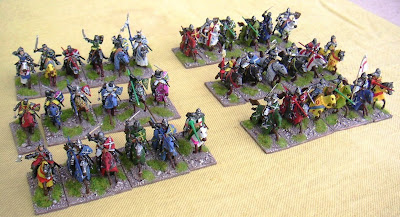 For the Men at Arms I have used a combination of figures from various manufacturers, Zvezda, Revell, Strelets and Italeri. Both the Italeri and Zvezda have patterns moulded on to the shields and horses. It seems at first like a useful idea, but there is only a limited number of poses so there is a lot of duplication, hence the mixing up of the Revell and Zvezda figures. 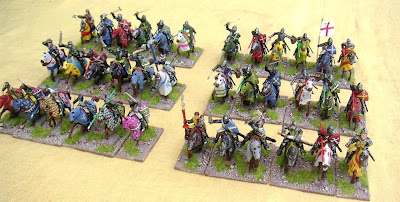 I have kept the Italeri Knights as a separate unit (front left above) as I plan to use them as False-French given they have fleur-de-lys
Posted by Fire at Will at 13:53 3 comments:

Well not quite, it's the curse of the irregular, non uniformed figures. I've got nearly 100 medievals on the go and I just seem to be adding odd bits of colour to random figures.

In the meantime I've played another French Revolution game (thanks Paul) and the rules are shaping up OK. The only problem was the terrain effects chart that needs more work, hopefully I'll post a draft on esnips soon.

Given the better weather I've been out and about and on Sunday I was cycling through Tatton Park when I was stopped by a column of Union Infantry singing "The battle cry of freedom". There was an ACW reenactment in one area of the park and these guys were marching into the Old Hall area preceded by Berdan's sharpshooters, it certainly made me want to play ACW again.
Posted by Fire at Will at 20:42 3 comments:

Well, not exactly, continuing the theme of army planning I'd thought I'd try and justify my self-imposed constraints over the years on my army building activities. (The sceptical may ask what constraints since I have 22,000 figures already painted.)
In general my constraints have been more of an attempt to force myself to complete existing armies rather than create new.
1) Stick to plastic figures - originally worked well as a rule until what became known as the golden age of plastics, new releases were slow and steady giving me time to consider how to use them. These days I can't buy even a single packet of each new release without falling behind. Plastic Soldier Review is a great help now as in the past I'd have to buy a pack just to see how useful the contents could be! This rule also only adequately applied while plastics were only available in 20mm. The rule originated when money was short and plastics were the cheap option, I also discovered that large metal armies needed transport that I didn't have.
2) Stick to a common scale of figures - alongside the boxes of figures I have many boxes of terrain and this tends to get used across multiple periods. Any new scale would entail purchasing yet more terrain to go with them. Having started with Airfix I have also stuck with 1/76 as my vehicle scale, which reduced the range of temptation.
3) Don't start an army until sufficient of the range is available - I suffered this on a number of occasions, when a manufacturer started a range and then just stopped. The Esci Crimean War is a prime example, for years I held onto Russian infantry and artillery waiting for suitable enemies, of course once I disposed of them Strelets started producing them!
4) Build both armies - having been itinerant for some of my life this had the advantage of always allowing me to put on a game whenever I was and even play solo (I was a member of the Solo Wargames Association for a number of years).
5) Why create this army? - what is so different about this period/army from those I already have? This is now a more relevant question as I could add quite a number of extra armies to my existing collection. A subset of the question is how flexible is the army in terms of different periods it can fight in or with small changes act as a different army. My new Ottoman army can cover at least 300 years. However note that this capability may cause you to create yet another army to face it in a different period! e.g. I'm currently contemplating using Spanish conquisadores against the Ottomans.
6) Make a purchasing list - there is nothing worse than getting back from a show and finding you forgot to buy something, but I find creating a list helps me to maintain focus. My list also prioritises my purchases into "must haves", "only if cheap/discounted", "for the future" plus "Xmas". The latter is issued at the relevant time of year to family so they know what they can buy me.
Finally after all that I still buy things on the spur of the moment, especially from the B&B
Posted by Fire at Will at 21:16 6 comments: