The Hat Parthian cavalry came with a few light infantry with shield/javelin and bow. I'm not sure how I will use them in what is essentially a mounted army, but I painted them so I had the choice is needed.  The main problem is that as they are add ons to the mounted sets there is only one pose of each, which makes very boring irregular skirmishing units.

My second Hobbyboss Aircraft was a Russian Mig 3 one of the mainstays of the VVS in the early part of the war.  As provided in the kit I assembled it as one used by Aleksandr Pokryshkin the second leading Soviet ace of the war with 59 official victories 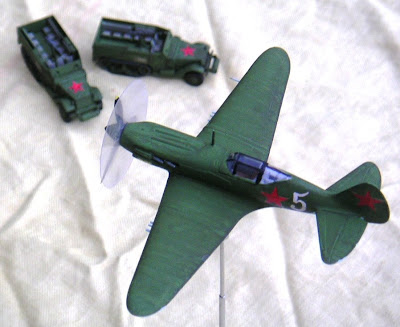 One of my Xmas presents was the Hobbyboss model of the Hawker Hurricane Mark IIc.  This is a later version with the four 20mm cannons.  The only problem with the Hobbyboss kits is that they are modelled with the undercarriage lowered and I prefer flying versions.  Therefore I had a little bit of extra work to remodel the door flaps closed.  I also decided to paint it in Western Desert colours as I will only be using it in games involving ground support and there was little of this action in North West Europe during the period when it was in significant use. 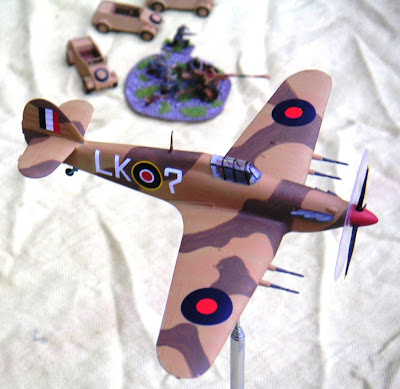 My final purchase of 2008 was a brace of Italeri fast build half tracks.  I was uncertain as to whether to bother or not as most of my WW2 armies are 1/76.  However someone over on the Society of Gentlemen Gamers posted up a comparison of the vehicles and they are almost the same as my Airfix ones.  They assembled really quickly and produced an excellent vehicle.  I decide to use these ones to provide some extra protection for my Russian Recce troops. 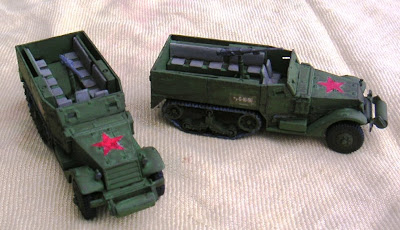 Along with the Fujimi PanzerJager I was a Pak 40, which seems a bit out of place as a Pak 36 or 38 would be more appropriate for the early war.  I still had some left over late war crew from the Pegasus infantry gun so I put them together.  The only obvious mismatch is the size of the round as the pak 40 round is almost 1 metre long. 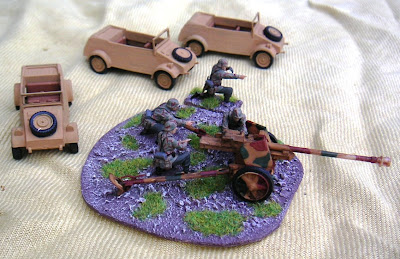 Behind the gun are a number of Eidai Kubelwagens, I am leaving them at this stage until needed as I haven't finally decided whether they will be used in the desert or Europe.
Posted by Fire at Will at 16:10 No comments:

Finished this batch of extra early war Germans on Christmas Day, but this has been the first chance to take pictures. I bought a pair of Eidai Krupp protze a few months back, as I need them as tows for my 37mm's. The reason for the purchase was that the Matchbox set only provides the truck version and not the protz (limber) version. Unfortunately only one complete kit was available, but some parts from another set were included and this included the protz part. Since I had two unassembled Matchbox kits I decided to fit the Eidai protz parts to them. It turned out the Eidai kit was larger and I ended up having to trim down the parts to fit and in retrospect it would have been easier to have scratch built the parts. The other unfortunate part was that I copied the Eidai model so I have incorrectly modelled the rear of the vehicle.

Front row left and right the converted Protz and centre the Eidai truck version.
Rear row a additional Panzer IV plus a reconditioned old model (both Airfix) and a Panzer Jaeger I (Fujimi)
I still need to add some crews to the vehicles.
Posted by Fire at Will at 10:55 No comments:

A recent WW2 game required me to have a Russian Recce Company equiped with motorcycle combinations, During the game they did not move so I didn't need to deploy some German combos that I had ready. I found that the Eidai Krupp protze set had a combo in it so I basically painted them up as Russian in case I need a unit again.

The moulding of the figures is pretty poor as can be seen above, particularly the arms of the driver, which are very spindley. The motorcycles themselves are not too bad.
Posted by Fire at Will at 10:53 No comments:

Well, after all the anticipation it was a good Christmas for presents.  The dominant theme this year was aircraft, plus a scattering of goodies for other periods.
I hope everyone else did as well
Will
Posted by Fire at Will at 11:47 No comments:

These are from the Zvezda Polish Hussar set, the central group is the actual command group provided and he will take over as the overall commander of my Poles.  The other two are just ordinary hussars but based as commanders.  I added some extra bits to fill up the bases with an Orion Janissary and a war dog from the Revell Conquistadore set 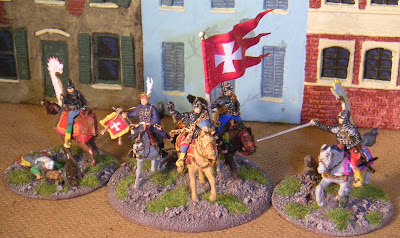 I've still got a few more bits to finish painting and I hope I'll have a clean slate by the end of the year
Posted by Fire at Will at 17:27 5 comments:

or rather Strelets Medieval Levy 1, again picked up on the B&B at Derby, they'll provide the suitable knight bait to go with my medieval armies.

quite a nice set, but took a while to paint as they were irregularly coloured.
Posted by Fire at Will at 17:19 2 comments:

I picked up a mixed bag of Macedonian light infantry at Derby, it comprised both Zvezda and Hat figures.  I hadn't bought the Zvezda figures before as they were included with the phalangites, which I had plenty already.  The front row is all Zvezda figures and they are very nice figures, the only item I felt was wrong was the helmet crests on the standing archers, which seemed rather over the top, so I cut many of them off and re-attached one to a kneeling archer.

Apologies for the quality of the images as I was forced to take them in artificial light
Posted by Fire at Will at 17:13 No comments:

Had an unusual day out on Sunday, it was the equivalent of a car boot sale for wargamers called Warboot and organised by the Manchester Area Wargames Society. There were 21 tables available to rent and I booked one for the Deeside Defenders. Access was easy, just a short drive off the M60, the only real issue was the limited parking. I didn't have any problem as I arrived early enough, but the sight of a large empty office car park nearby was a bit galling.

There were certainly plenty of bargains, especially if you were into Fantasy, Flames of War or Boardgames. All the tables were booked, but some remained empty, this included one for one of the main enthusiasts for the event. Attendance was low, maybe because of the fog, maybe due to wargamers spouses insisting on going Xmas shopping, or just because it was a new event.

I broke even, managing to reduce my stock slightly but finding enough bits to buy.

Will I participate again? Certainly, it was a much better atmosphere than the normal scrum at a B&B. It made us wonder about adopting a more formal approach like this for Gauntlet.
Posted by Fire at Will at 07:56 1 comment:

Back across the Pennines for another show, this time Recon at Pudsey, near Leeds. This was my first visit and it seemed much more laid back than the bigger show at the Royal Armouries. Not as many traders and games, but lots of friendly people to talk to. Yet again it was Marignano 1515, its last outing and for the Swiss a conspicuous success as with the dice gods smiling on them they stormed across the ditch and eliminated most of Bourbon's command before Francis and the french reserves got into play. 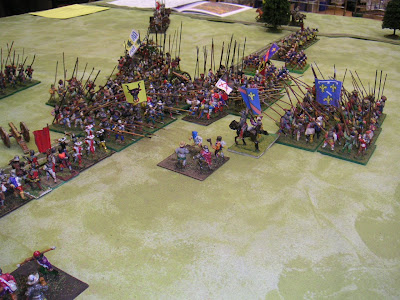 On the purchasing front, I bought very little, as I had to avoid items on my Xmas list, so

The real temptation was the new buildings from Total Battle Miniatures as they were demonstrating their new black powder building range with a Napoleonic game. Luckily for my wallet it was 15mm rather than 20mm.

Another year has almost flown by, so I really ought to look back at my plans and progress against them.

Other activities are preparing for Recon at Leeds this Saturday and then Warboot in Manchester a week on Sunday. Oh and of course Xmas.