Some WW2 bits and pieces

First a twin 13.5mm AA gun for my French and a command version of a M5 light tanks (I copied a version based on the M8 HMC). The AA gun is from Early War Miniatures and the M5 is made up from left overs from the PSC kit. 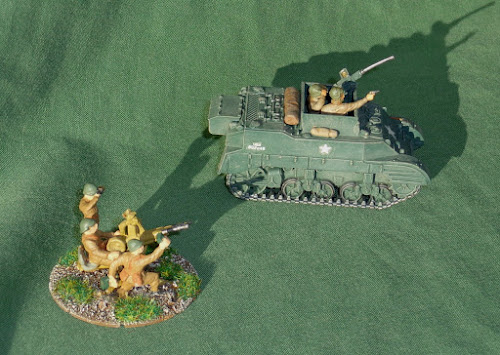 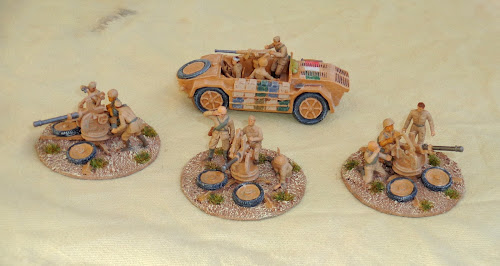 After almost a month of painting odd bits of colour I've completed five units of Russian Noble cavalry and a couple of commanders to go with my Strelsy.

The figures are all Zvezda, mostly their Russian Noble cavalry, but includes some Polish Hussars to make up the numbers 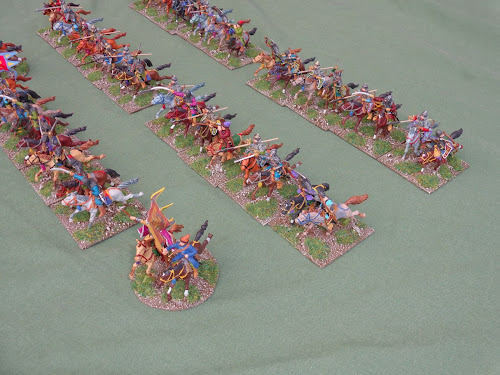 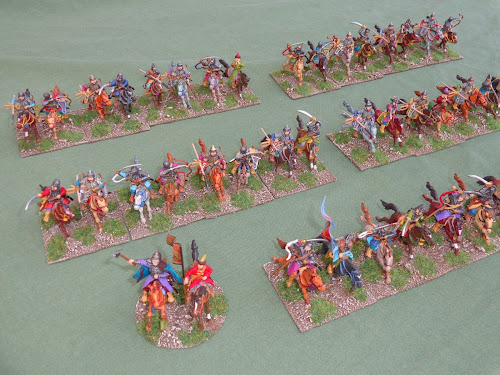 German panzers in the snow.

I was a bit bored of painting Russian cavalry (well underway now) so I decided to assemble the three Panzer IVs I bought at "not Derby" and paint them for late war winter games. 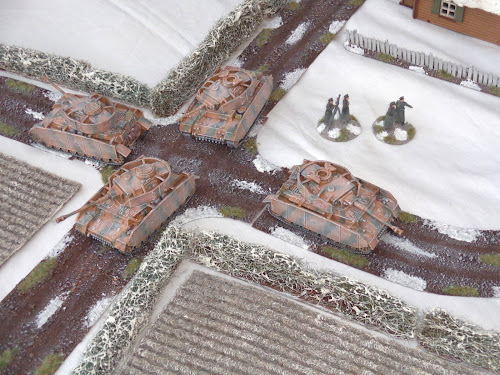 I also had a spare Plastic Soldier Company Panzer III, so I added side and turret skirts plus upgraded the gun with a Matchbox 50mm L60. I'll probably use it as either a command or artillery observation vehicle. 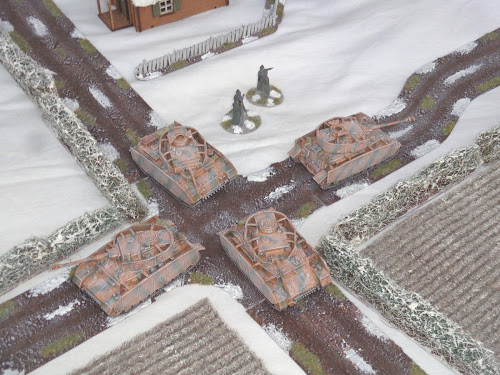 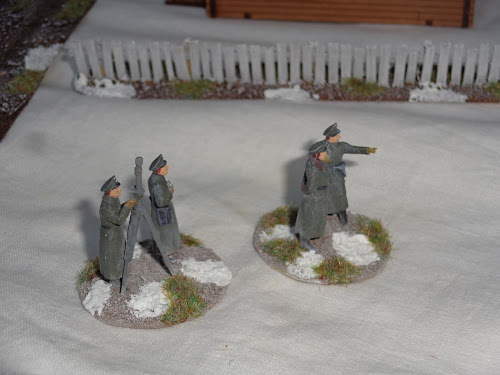 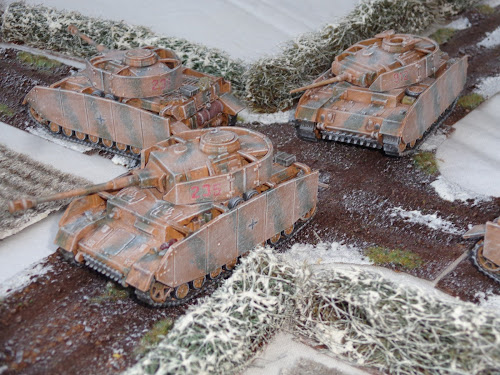 Another small bit of rework, I replaced the turrets on my old Airfix sdkfz 222 with the version included with the Plastic Soldier sdkfz 250 kit 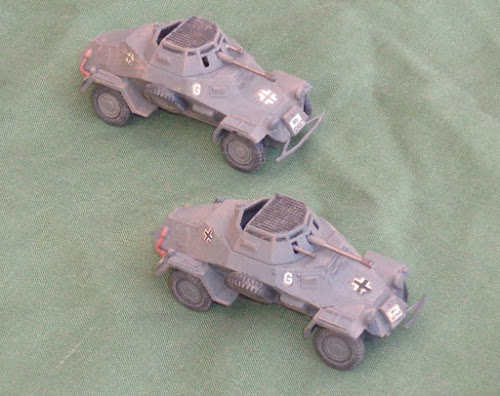 Of course it wasn't until I took the pictures that I spotted that 3 out of 4 had the MG in the wrong position! 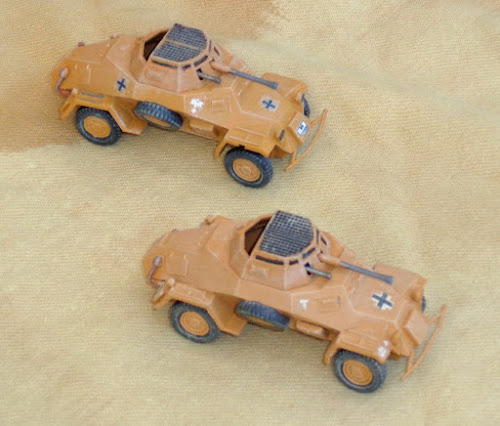 Another little job ticked off. I purchased some metal replacement Mark IV turrets from Rolf Hedges to upgrade my old Matchbox Humber Mark II Armoured Cars to the correct version for NW Europe in 1944. 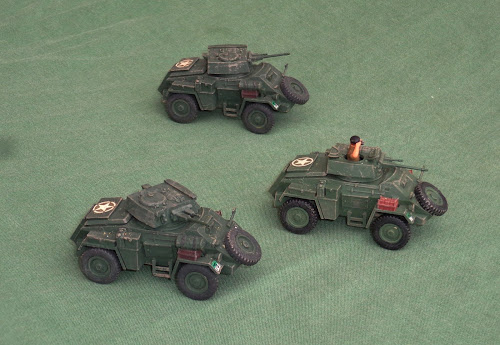 After, interesting to note the difference in colour even though I used the same Humbrol enamel colour, it has probably faded a bit too. 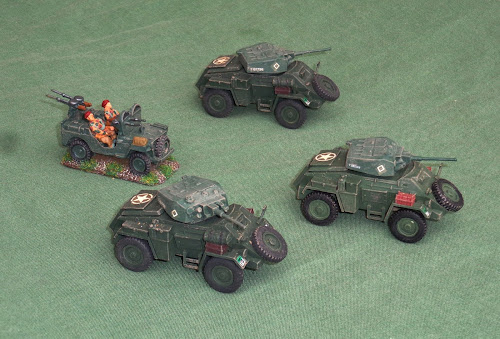 Tagging along behind behind is a SAS jeep that I bought at Newbury
Posted by Fire at Will at 12:12 4 comments:

Not forgetting the Germans

A couple of odd-balls out of the EWM miscast box. A Pionierkraftwagen to the left and a Steyr 1500 truck to the right. Both painted up for early war. 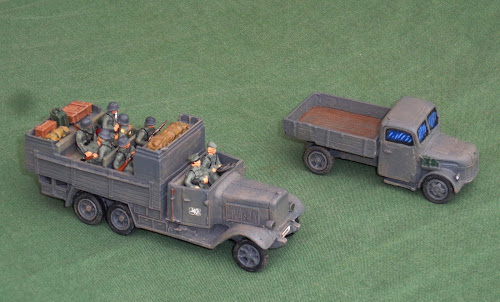 The Steyr came without a cab and I couldn't find any pictures showing this vehicle without one (until I finished it of course) The lucky thing was the RSO was made by the same manufacturer so I used the top from a left-over Plastic Soldier RSO cab and fitted it on top. 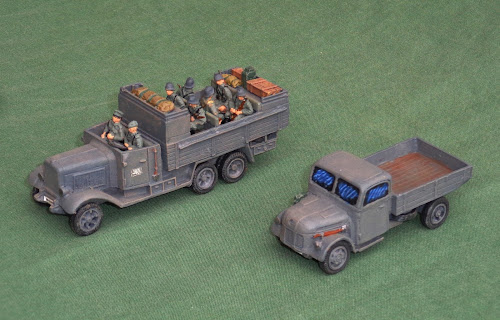 The Pionierkraftwagen is a big beast and I now feel the need to acquired a trailer with some assault dinghies on it. The crew are HaT tanks riders cut down to fit.
Posted by Fire at Will at 14:55 4 comments:

Keeping up with the Italians

Having found a pile of repairable vehicles in the Early War Miniatures mis-cast box at Newbury and "Derby" I have been working on repairing them. At the front two variants of the TL37 as a tractor and a light truck. The rear pair were acquired at Newbury without wheels so I used some old Airfix Scammel wheels for one and press-cast the others from Greenstuff using a Oyumaru mould. 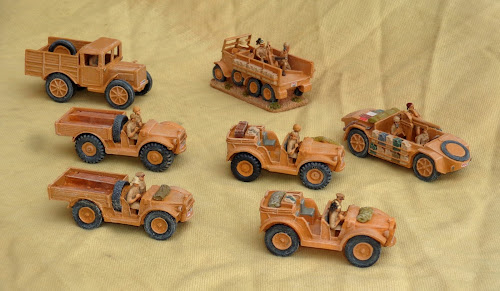 Back left was the most complex repair a Breda 40 artillery tractor, where as well a filling the various casting errors I also had to re-create the cab-top. At the back right is a AS42 Sahariana, where I've added a scratched up 47mm AT gun.
Overall, quite time consuming, but satisfying to recover what would otherwise be wasted.

I missed the back centre, which is a Ready to Roll Douvenque with a 20mm Breda AA. All the crews have been modified to fit and come from a variety of sources, mainly the left-over drivers from the PSC 25pdr kit. They were given Reiver replacement Italian heads. I understand from Gary at Sgts Mess these are still available but not included on their website yet.
Posted by Fire at Will at 12:01 6 comments:

Over on Beano's Forum a user called Beano Boy posted about using Oyumaru to create simple moulds. These can then be used with greenstuff to create simple duplicates of a master. Here's my first attempts at creating some extra wheels using an old wheel from an Airfix Scammell. 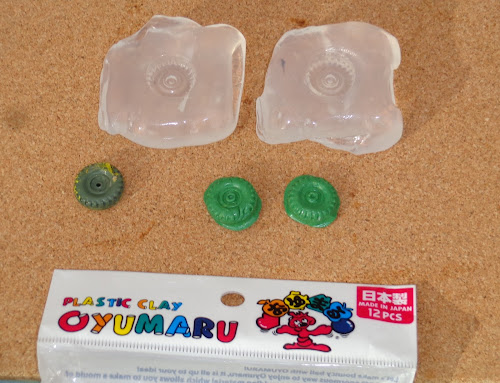 Quite a sucess for a first attempt, but the greenstuff needs to be left a while longer than normal to harden fully.
Posted by Fire at Will at 20:59 3 comments:

Some more units to add to my hybrid Great Northern War/Seven Years War Swedish army. As before I have used the Zvezda GNW Swedish Cavalry to produce two units of Cavalry and two of Dragoons. The uniform hardly changed between the periods and I have used the references on Kronoskaf for the uniforms and flags 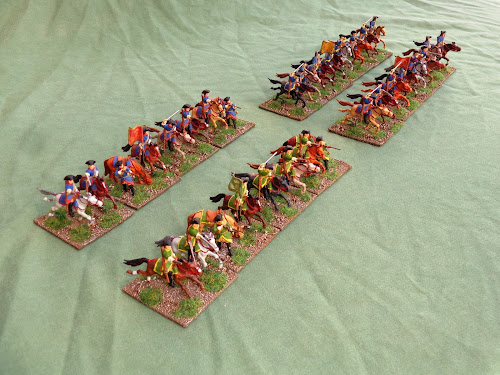 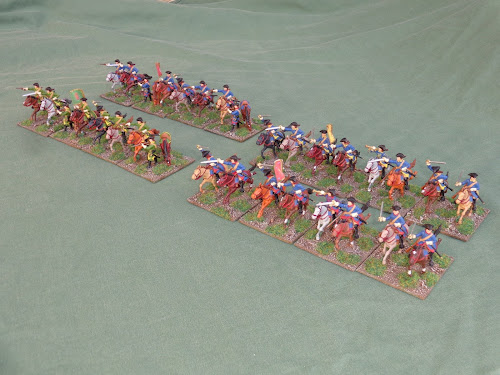 I've not based the two officers yet as I haven't decided whether to add extra figures to the command base.
Posted by Fire at Will at 14:47 2 comments: 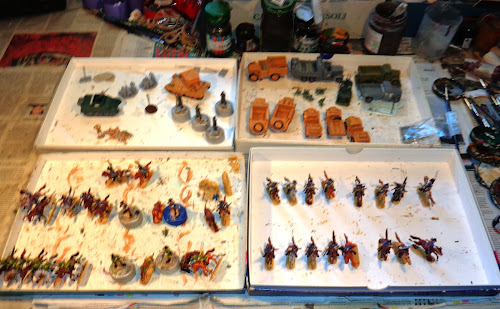 The front two trays have the nearly finished Swedish cavalry, the back trays contain an assortment of various vehicles mostly Early War Miniatures rejects that have been repaired, plus a Zvezda German winter HQ group and MMG teams and a French 13.2mm AA gun.

Other items to be worked on this month

A last few bits for October - the Wargames Illustrated vignette of the Eve of Edgehill, plus an extra couple of bods found in a box of lead down at the club. 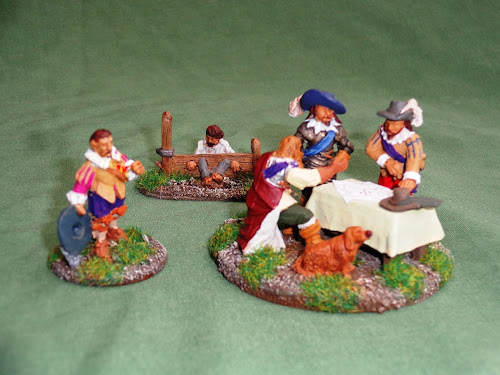 Shame I don't have any 28mm Royalists, they will just have to be objective markers! 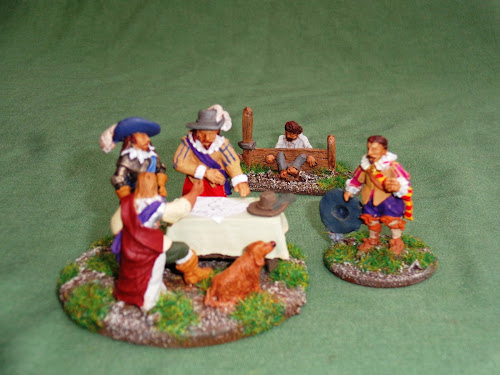