The latest item from Will's construction company is this Chateau'ish type building. Given the limits of the modular base It couldn't be much larger. Both faces are identical the fron looks onto normal roadway, which is slightly reduced in width because of the depth of the building, however two bases of figures will still fit. 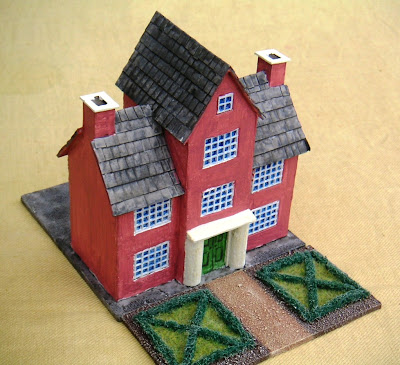 To the rear I added a formal garden module, it's very low so troops can easily move over it. It's just done simply with pan scourers and static grass.
Posted by Fire at Will at 14:26 4 comments:

From the same source as before and using a few oddments I have painted up another Jannisary Orta or rather two part Ortas. There were not enough figures to make a good looking four base unit so I made a pair of two base units that will be used together. 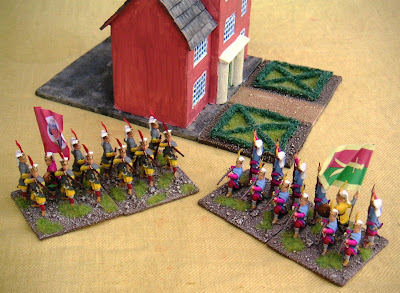 Another advantage of splitting the figures this way is that if I ever acquire any more figures it will be easy to expand both units and keep them consistent with the rest of the army.
Posted by Fire at Will at 14:19 No comments:

Thanks to Thomas I gained some more Ottomans while at York and I've now added another unit of sipahis. As before I have given the rank and file a consistent uniform this time a linen shade to contrast with my previous units (link) 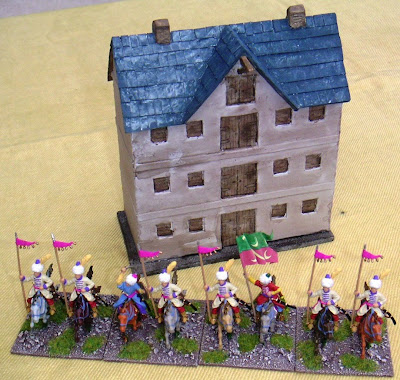 In the background is the first of my new buildings to be completed a granary. Hopefully its generic enough to be used almost anywhere in Europe and not just around Essling.
Posted by Fire at Will at 16:03 No comments:

I bought a couple of packs of the latest Zvesda offering from Netmerchants. A really nice set of figures and equipment. they will certainly mett my needs to complete/upgrade my WSS artillery. 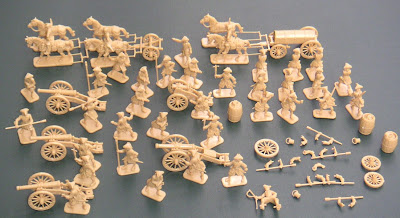 At the back a four horse limber and two horse caisson - different horse/figures from the russian set and I wonder if they could be mixed to give better variety. ( A bit to late for me)

To the left are the three 3 pounder guns, all nice crisp mouldings and easy to put together unlike Hat's offerings.

Centre is the single six pounder and a howitzer so the equipemtn is well covered.

There are 32 foot figures most of which are one piece mouldings, but a number have the plug in arms almost the same as in the Russian set.

The odd part is the left overs due to the sprue mix. There are two spare limber wheels, one 3pdr gun wheel, a limber rider and a gunner without arms. This surprised me as I would have expected better planning across the sprues.

Overall a better set than the Russians and easier to use for the WSS.
Posted by Fire at Will at 20:10 6 comments:

Not bridges in the Bailey bridge sense, but rather ones built to a standard scale to fit in with my SYW buildings. The standard footprint is 60mm x 60mm or 120 x 120mm. This means that my standard 45mm square based units will fit neatly.

I just got started, then remembered the article in the wargames annual by Charles Grant, so I added the partial and completely damaged versions as can be seen. In normal use the intact versions at the rear will be used. Construction is a mix of foamcore and hardboard. 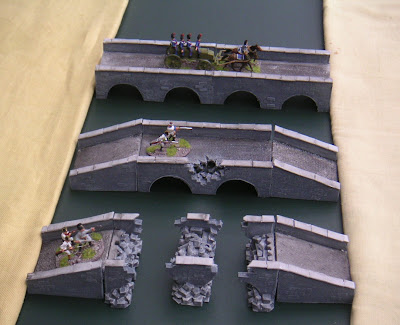 Trouble is, now I'm wondering whether to add one or two extra short sections to give more flexibility.

If anyone is at WMMS tomorrow you can find me on the Lance & Longbow stand
Posted by Fire at Will at 19:31 8 comments: 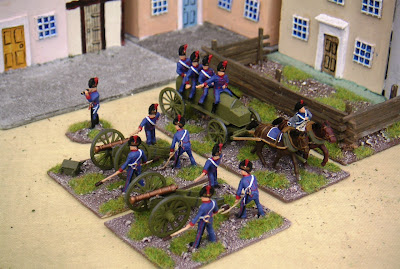 The figures are the old Airfix Napoleonic RHA figures, not quite correct but close enough. The train driver has had a head swap to give him a bicorne.
Posted by Fire at Will at 13:25 1 comment:

Just a quick post to illustrate progress to date on the granary and chateau. In the front is a bridge section being built to the same dimensions as the rest of the buildings. 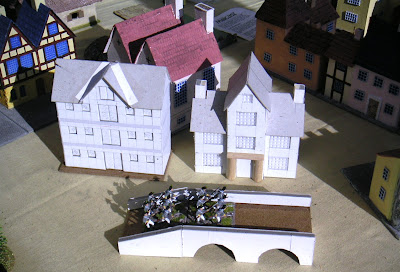 I've also decided to add a couple more buildings, etc. More detail on these when I get started on construction.
Posted by Fire at Will at 14:18 2 comments:

I picked up a couple more of the Pegasus small buildings on the B&B at York, I really like these and I had bought their larger set but found them to big for normal 20mm gaming so I sold them on.

I decided to make sure that they were different to my existing models, but on checking I found that the thin cardboard bases had warped over this winter so it was a complete rebase job. 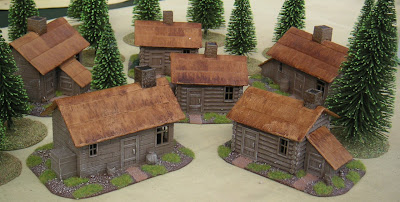 So it was out with the jigsaw and cut a new set of bases from MDF this time. The basing on all the houses is now to my current standard with the two new building to the front. I've added the outbuilding in different positions and added other bits to give a bit of variety.

I just wonder if I should have bought that other set that was on the B&B at crewe!
Posted by Fire at Will at 21:21 6 comments:

In the last of today's sunshine, here is my latest War of Spanish Succession unit, the Prince Franz-Ernst Dragoons from Hesse Darmstadt. The figures are as before from Strelets, but this time a mix of the Russian Dragoons and the mounted figures from the Guard of Peter the Great set, plus a few horses from the Revell TYW cavalry to make up the numbers. I picked it because it was close enough to by Hesse Kassel regiments and it also had green uniforms a colour I had not used so it would add to the variety. 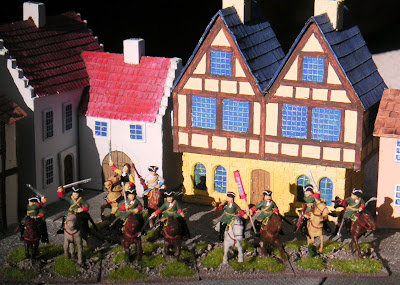 Since I acquired a few more figures on Sunday I'll have to find another suitable couple of regiments, one of dragoons and the other of horse grenadiers.
Posted by Fire at Will at 16:07 1 comment: