So back across the Pennines to support the Lance and Longbow, plus a chance to do a bit of catching up, it was nice to meet some faces from the web.

I was too late on the B&B to pick up any real bargins, but found "Trobruk, the great seige reassessed" by Frank Harrison for GBP 3.00, which might help me with the big game next year. I also acquired some artillery from Hincliffe (2 x 75mm + 2 x 105mm) to bolster Brescia which I will command in the game.

Other acquisitions were the Osprey "Armies of the Ottoman Turks 1300-1774" and "French Soldier in Egypt" to give me more inspiration on my current projects and a Hobbyboss Aircobra for my Russian WW2.

Not much eye-candy at the show, but there was a nice looking RCW game using Red Actions and a pirate game using WSS figures that got me thinking of possible scenarios with my existing figures (plus a few purchases of course!)

As expected, in the L&L game, I lost playing Biocca 1522, but one unit of Swiss pikemen actually pushed its way over the defences and defeated a counter attacking pike block before succumbing to a flanking counter attack, so I consider my performance a success .It seemed quiet, but some of the traders seemed to be happy with their turnover.

On the workbench - October/November

Running ahead of schedule for once, so what have I got planned?

The last planned unit for this month. These are lovely figures from Hat, and it first all went well, the elephants stuck together fine with ordinary polystyrene adhesive. I've been very careful to insure that the HaT figures are really washed well after getting some that were really greasy. It was the figures that went wrong, unlike the elephants there are no pegs or anything to locate the figures onto. At first they seemed to stick OK, of course once painting got really underway a couple of them fell off. So it was out with the hot pin to weld them into place. 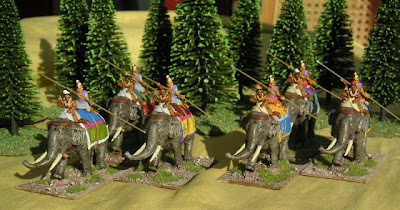 The next challenge was the pike as the one provided was bendy and would have really failed it I had glued it. So it was out with the florists wire heat it up over the candle and position carefully so it welds itself into place. This normally works on the first attempt, but with the extra soft Hat plastic it took two attempts for most figures and three for a couple. 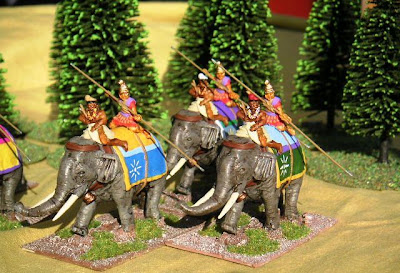 Overall they painted up OK

Sorry to see them go

After 30 years service, I have parted with my Hinton Hunt Napoleonic Russian cavalry.

Over the years they fought in many actions, but their weight was always a constraint. They were originally bought to provide cavalry to go with my Springwood Russians ready for a club refight of Borodino. With the release of most of the Russian cavalry in plastic I gradually built up a second cavalry force and tended to use them instead. They consisted of the following units all 20 figures strong:- Akhtyrka Hussars Kiev Dragoons (HH Prussian Dragoons painted as Russian) Ekatarinoslav Kuirassiers Don Cossacks (Blue tunics) Bug Cossacks (Green tunics) Some close ups 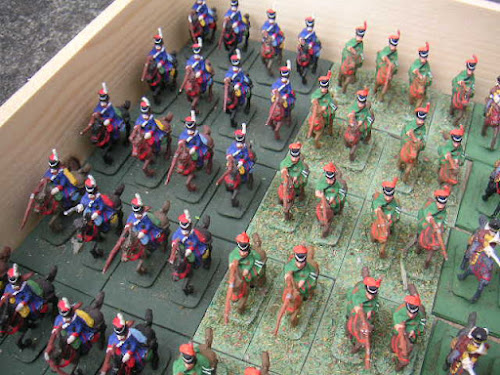 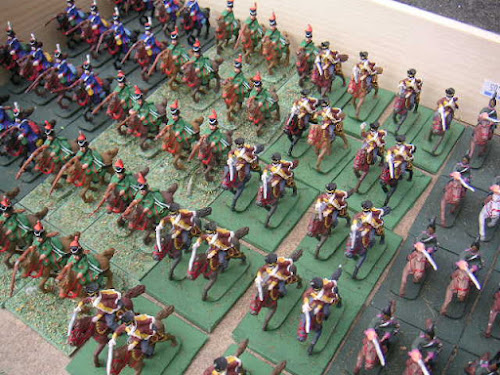 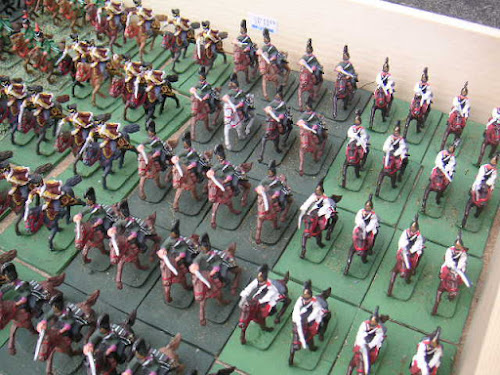 You'll be sadly missed guys, hopefully you are going to a good home Will
Posted by Fire at Will at 16:31 No comments:

Well, I tried to access the Gentleman's Wargame Parlour last night with no luck, then I heard that it had been closed down. I'm not sure what happened, but it was a great forum with a lot of great guys, really inspiring figures and scenery, etc. plus I was looking forward to the big game next year.

Another set of units to face the French in Egypt, this time Nubians as faced by Kleber, as he advanced into upper Egypt. 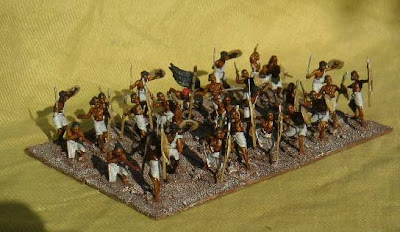 These are the Waterloo 1815 dervishes and they are really nice figures. There are a few Esci Muslim warriors use to make up the numbers. The basic colout scheme is a base coat of sand plus a wash of brown ink, then a very light grey for the cloth. Gets me thinking about doing the Sudan again, oh dear!

Here's the units I've created to use as either Cairo/Alexandria militia when facing the French, The figures are dominantly Esci "Muslim warriors" with a few Waterloo 1815 dervishes added.

They are not expected to do well, but hold ground, especially behind fortifications, etc and provide a general nuisance value.

The bases are a bit to plain, but I've not yet decided how to improve them. I want some sort of vegetation but the static grass I've got is far too green to use. I'll see what I can find at Fiasco next weekend.

It's taken a long time, but now they're finished. The figures are by Caesar and while being very nicely molded some figures do tend to be overbalanced and I had to add wedges to straighten them when basing them. I'm also not sure about whether to add more vegetation to the bases?

I've based them for a set of rules called "DBA in the new world" and I'll just be using them as another unit of auxiliaries in my Aztec army rather than as a stand alone army, but perhaps I'll add more at some point in the future.

After adding standard bearers and officers to my existing landwehr units I had quite a few painted figures to hand, rather than put them to one side to replace losses I painted up a few of the Hat Prussian reserve infantry figures as landwehr. For the others I just repainted the facings and the whole unit became a battalion of Pommeranian landwehr. 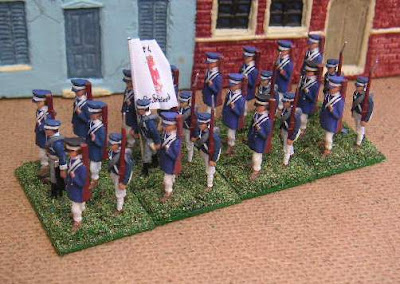 That should be the end of my work on the Prussian infantry as I've no more figures left and I now have 33 battalions in close order completed, certainly sufficient for any normal game. The only component of the army now understrength is the landwehr cavalry.

I've finished the Pegasus German trucks and they were a pleasure to build and look good as well. 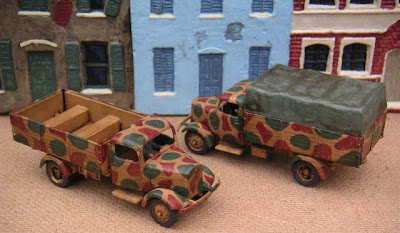 The only part I am not sure about is the bench seats in the back as they reduce the flexibility of how I can use the vehicles, but it's a minor quibble. I'm certainly looking forward to whatever else Pegasus bring out in their quick build range even if they are 1/72 rather than 1/76
Will
Posted by Fire at Will at 14:06 No comments:

As I mentioned previously I found I had some Italeri Mongol light horse that could be used as Tartars. I've painted these up and they will either be used for rennaisance games with my poles/cossacks or with my Ottomans for the period up to the WSS. 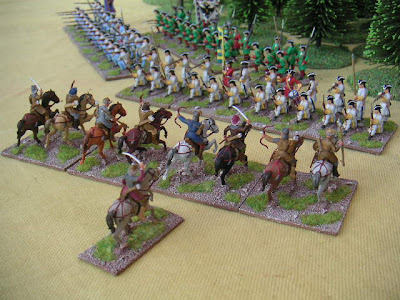 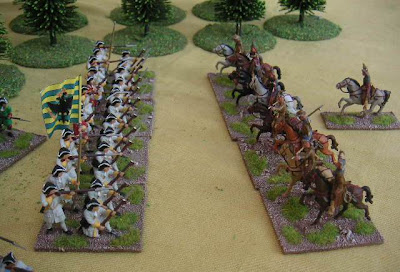 I ended up doing all three regiments in one batch, and it's great once they are all finished, even though it took a while to get here. 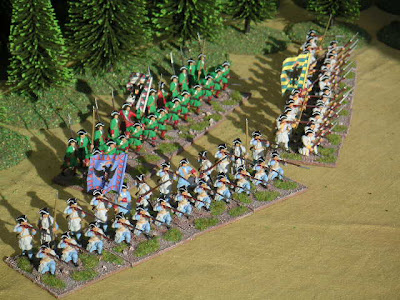 I have painted the Wallon regiment Los Rios (green coats) and the Regiments Koenigsegg (light blue facings) and Eck (yellow facings), for standards I have just used whatever was available and looked most suitable. 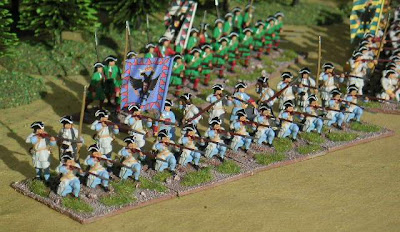 I now have a complete small army, and need to concentrate on their opponents the Ottoman Turks, where not everything is available in plastic yet.

Yes, I got diverted by trees. I have a lot of trees produced many years ago and I intend to upgrade them sometime soon. However I was in Modelzone in Liverpool and my wife in an attempt to distract me from the range of plastic kits said "they've got nice trees..". Well they were, and when I eventually emerged from the shop my only purchase was a bag of conifers. It makes a nice addition and they will replace those old plastic roco ones that always fall apart. 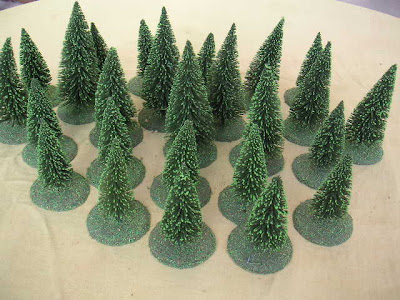 The bases were made out of hardboard cut using a hole borer which gave a nice chamfered effect when I got it right. But cutting 25 bases was not as quick as I had hoped! To complete the bases I just used some old coarse scatter material fixed with PVA.

Yes, more Prussians, this time the II/10th Reserve Regiment (22nd Line) at the back made up entirely of Springwood second version Prussian line. Because they arrived second, I've always used them as reservists, really because I'd already painted the regulars by the time I bought them. They are wearing the blue uniform issued late in 1813. The standard is a retirefahne from Silesian IR Nr.2 (#11) their stammregiment.

In the front is another version of the same unit, it can't quite act as the I or III batalions as their uniforms were different, although the III had a very dark grey almost black tunic. They will either act as the III batalion or as the mythical Frundsberg Frei Batalion. The figures are a complete mix, in the front rank are Revell prussian line infantry, then behind in groups are (L to R) Hat Lutzows, Springwood Prussian line and Hat Prussian reservists.

On the workbench - October

Where to begin?, September has been a bit of a disrupted month with jury service, trading figures and a delivery from Harfields. So what are my plans (hopes) for painting/completing this month?

The other action is to continue trading so I hopefully convert my stock of "undesirables" into "needed" figures, watch the trading department for details