Latest US for WW2

Due to a slight diversion, I hadn't managed to take any pictures of my latest units. These are inspired by the latest Rapid fire book for the Battle of the Bulge. I'm still not happy with the webbing colour, so it may change.

First off, a reece unit as involved at Foy Notre Dame, I've only painted the figures, the vehicles are from my existing collection. I used the Revell WW2 American Infantry for the bulk of the figures, with only the 60mm mortars and figures added from the Esci US Soldier set. The organisation is quite different from the original version in the RF suppliment so I need more M8's (The ones shown are fron Frontline). Typically I have more MG armed jeeps left over from the old organisation (these are Carama jeeps plus SHQ crews) 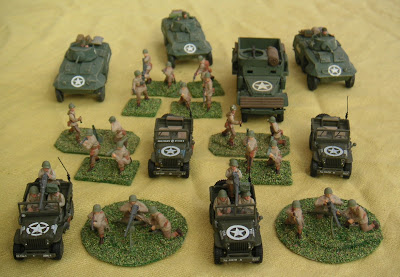 Next was an Engineer battalion, the figures this time are mainly the Esci US Soldier set,plus additional bazooka teams from their WW2 French Soldier set. I now need to change over a couple of 6x4 trucks to Tipper trucks, plus a boat trailer and they'll be done. 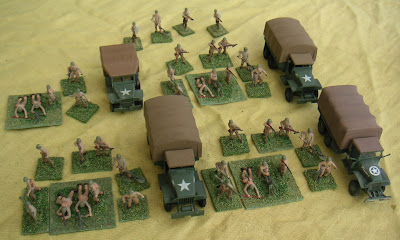 With Desaix in the Desert v0.2

I've just uploaded a copy of the latest draft of the rules onto esnips at link. I'll be playing another test game again on Thursday

If this link works OK then I'll share some more rules, etc this way.

Although I'm heavily involved with DIY, I managed to send off an order to Harfields for some figures, prompted by receiving the latest catalogue with some 2nd hand bits I "need". So what did I get/plan to do with them?

I missed my anniversary!

Suddenly realised that it's been over a year since I started blogging. The annivarsary should have been on the 15th January and I obviously should have painted a special unit to celebrate. Oh well, at least it wasn't my wedding anniversary that I missed.

Well it's been quite a week with virtually nothing done wargaming wise as the kitchen is being refitted. I'm half way through pinning the parthian horse archers. This involves driving a ordinary pin up through the base of the horse, straight through the body of the horse and then into the rider. If I aim correctly I can drive the pin through the centre of the saddle.

Why pinning? I use it whenever there is inadequate support for the horse, which is usually when less than three legs are on the ground. In this case the gluable plastic flexes so much that I'm sure the paint will flake quickly, especially on singly mounted figures. With the harder plast used by Italeri, Zvesda and previously Hat I've not had to bother much in recent years. I used to be a constant necessity with my old Airfix figures. The upside of the soft plastic is that pinned right through the horse is easy and hence the abity to fix the rider on the same pin. I was having problems welding the riders in place with a hot pin so this technique has worked out OK.

I have also started assembling the Pegasus log buildings, and it's become apparent that they are far too large for my normal 20mm gaming, so I'm trying to decide the best means of disposal at minimal loss.

Back to the DIY now

Finally from Vapa, some pictures of the North Hull groups game, full of nice ideas for my western desert stuff and the big game 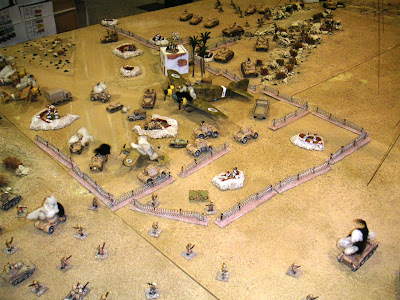 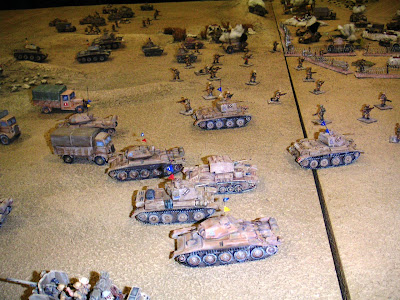 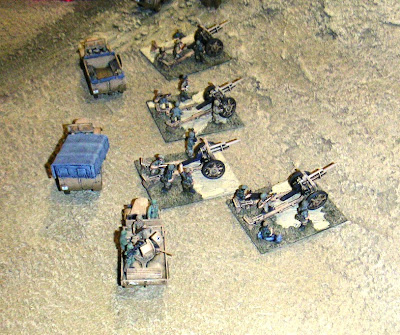 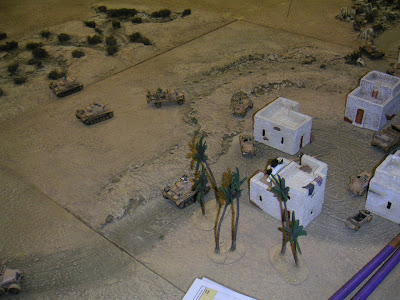 Another quick escape to the bar saw me meeting up with some of the guys from the Society of Gentlemen Wargamers who are involved in this years big game "Battleaxe". Note the 7th armoured shirts for the "Allied" players, hopefully we'll get something for the Axis.

Just missing Simon who took the picture
Posted by Fire at Will at 20:28 No comments:

Vapa was good on the purchasing front as well, during the periods I managed to slip away I acquired:

It was great being able to move around and get to almost all the traders without problems. The venue is excellent and the only problem was a pinch point near the SHQ stand. The only downside was that there was nobody selling any plastic figures, so I'll be putting in an order to Andy Harfield shortly.

It was a long day yesterday, all the way to York and back leaving home at 7am and returned at 6pm. It was my first visit to the current racecourse venue and I was very impressed. The last time I visited was in the dim and distant past when it was held in the confines of the Merchant Venturers Hall in York.

I was involved with the Lance and Longbow Society and playing the demonstration game. This time it was Vikings v's Picts played to WHAB rules, which I hadn't played before, but part of the warhammer suite of rules so they became familiar as we played. Below the obligatory tea break and discussions. 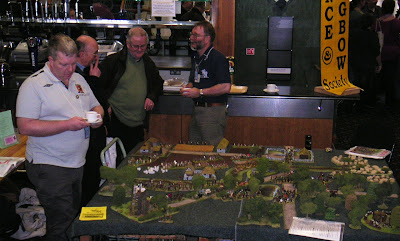 The Vikings (myself) had to get their pillage from the left to the right side of the board, presumably back to our ships, while the picts on the far side of the table tried to prevent this and recover their stolen goods. 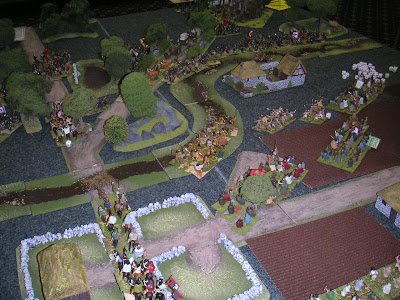 The crunch point, the wagons coming from the right had to keepto the road, which involved passing the junction next to the ford. Above pictish cavalry have just attacked the viking archers who had not yet got into position to cover the crossing/junction. They didn't shoot well enough and were only saved by a counterattack from a viking unit just off to the left. In the centre the pictish skirmishers are crossing the river to attack the wagon train (they nearly succeeded but a couple of beserkers saw them and caused major damage. Further to the right the picts are starting to move on the viking left. The beserks are a vicious single shot weapon in WHAB, once they make their attack they die.

Overall a hard fought game with a marginal victory for the Vikings.
Posted by Fire at Will at 14:23 4 comments: