Very much an impulse buy when I saw it on ebay. For some games I needed something smaller than the old Airfix pontoon bridge set and this set in resin from Anyscale Models was just what I needed at a reasonable price. Although I could use it as is, I felt it needed ramps so it would work better as drop on terrain. 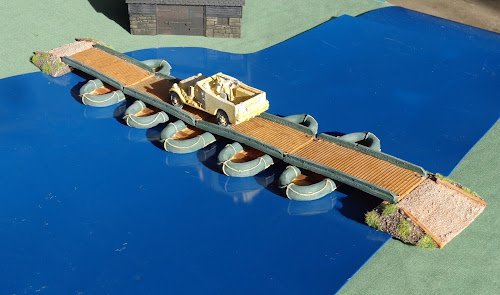 The ramps were simply made out of old foamcore. I also built an extra pair so I could create two smaller bridges 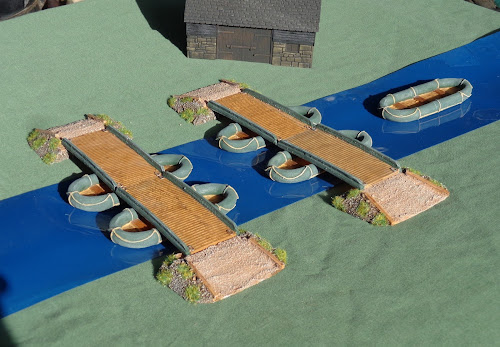 The white scout car is work in progress and just added to show the scale of the bridge as just suitable for trucks and very light armour.
Posted by Fire at Will at 07:44 2 comments:

I had to spend a week down south with my family, but luckily the date coincided with a Rapid Fire game in Bristol, where a late drop out meant a place was going, Success!! I was a commander of part of the Fallschirmjaeger division defending Carentan from US paras and the 2nd Armoured Division. A great day out with some old and some new friends. I didn't try to keep a complete record of the events and took very few pictures as most of the fighting took place on the opposite edge of the table. The scenario is a composite of the mini campaign in the Rapid Fire ... where all the tables actually interlink. 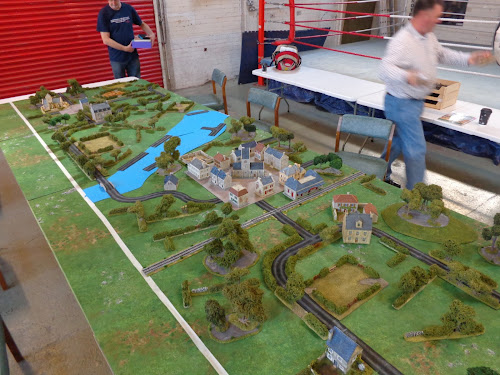 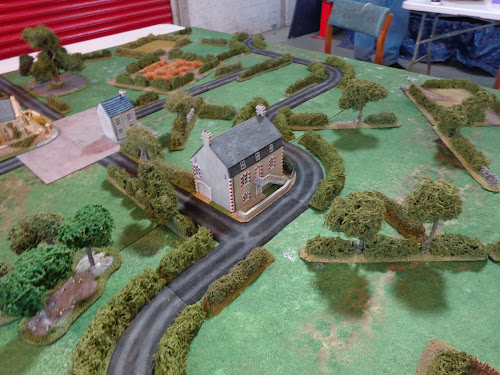 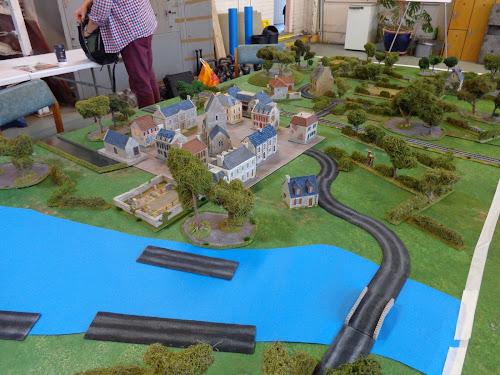 Carentan, the major objective, I had to old this, and look how close it it to the US base edge 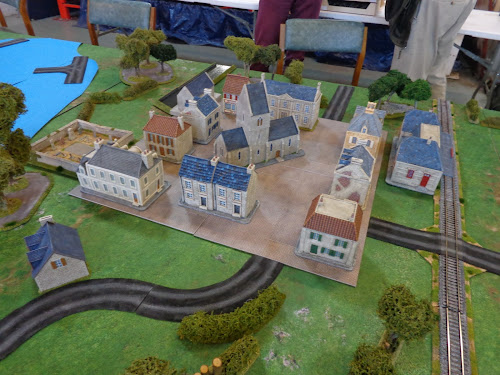 US paras advance with M10 support on St Come-du-Mont 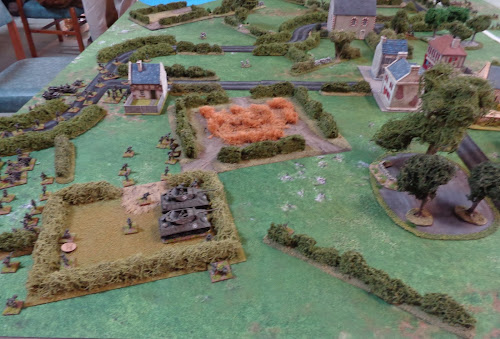 17th SS arrive just in time to stop the US outflanking Carentan, a blazing Stuart marks their furthest advance. By this point a series of lucky (and unlucky for Charles) die roll meant the US para assault on Carentan was driven off leaving the task to the US 2nd Armoured! 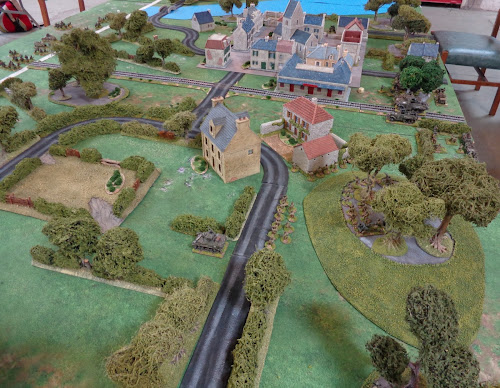 The awful moment loads of armoured infantry and tanks arrive, One building has been ruined, but I'm holding on the the fringes. 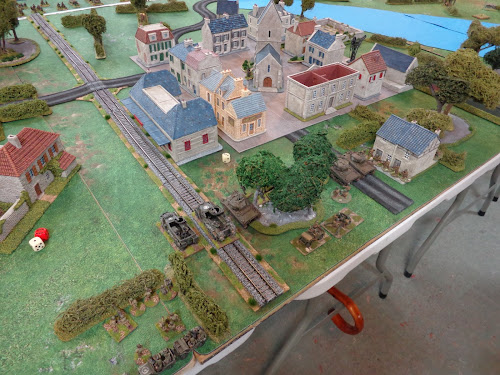 Slightly later as part of the 2nd Armoured flank Carentan , they get a fright from a FJ unit that had been lurking in the station, but they were unsuccessful with a panzerfaust attack and have suffered the consequences. 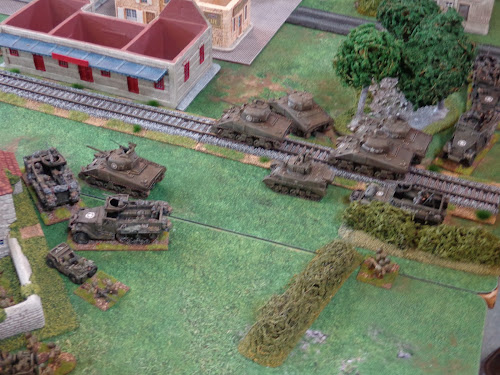 meanwhile across the inundation the US paras are also advancing slowly 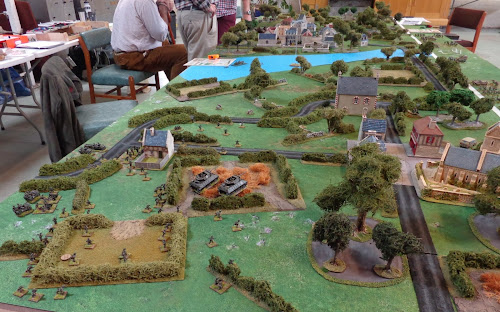 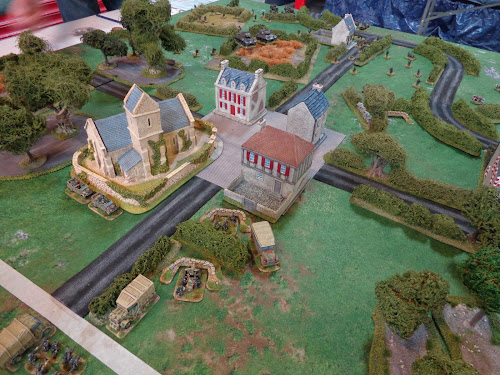 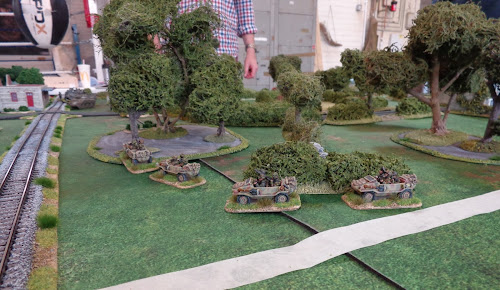 Our 105mm battery, that switch support between myself and Rob as needed 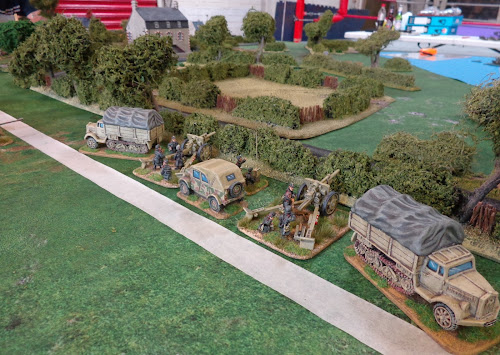 17th SS to the rescue. Just after my greatest success with a single Panzershreck team taking out a Sherman and a Stuart after patiently skulking in the bushes a horde of SS Grenadiers arrive an commence a counter attack 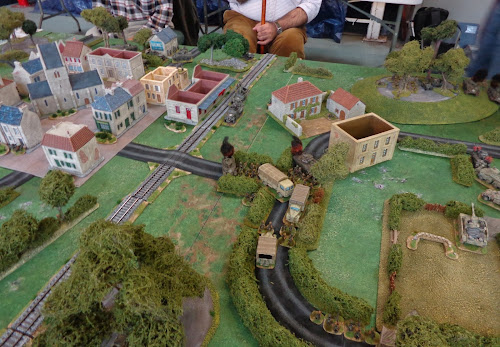 More devastation being inflicted on the US armour (they then suffered a number of low morale throws leaving only one armoured infantry battalion on the table. 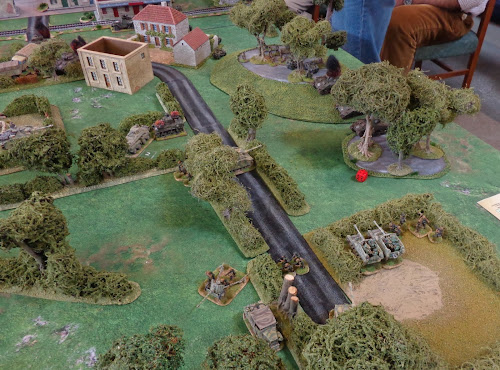 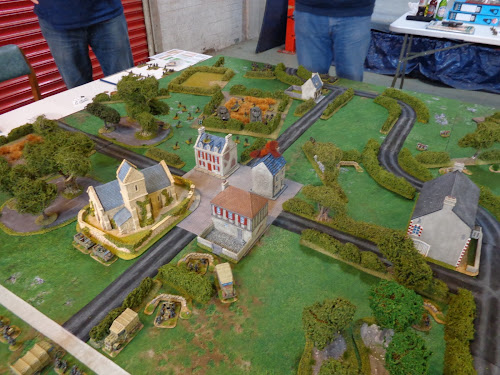 Shortly after the 17th SS Aufklarung stormed into Carentan and evicted the last GIs holding a building by the crude but effective close assault then opening up with all available weapons once it was repulsed. I was quite relieved as I was only a couple of casualties away from a morale check, which could have at any point left Carentan open to capture.

Overall a difficult game, the 5 foot width was very restricting and ideally there should have been an extra foot on the US side to allow better deployment, etc. I'm not sure that Rapid Fire really copes well with urban fighting (more thoughts to follow)

Thanks to everyone for a great days gaming

Continuing with the third of my war-parties, this one is Shawnee, made up of the Strelets Tecumseh figures for the war of 1812. As before each war-party consists of two warband and two skirmish units plus command. 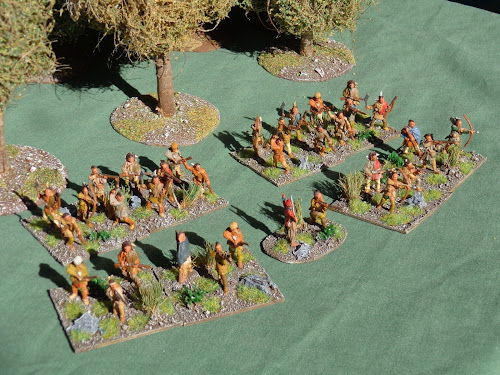 Bice figures, but dressed for somewhat cooler weather than the Italeri Indians. The commander is of course Tecumseh in the very speculative British generals jacket. 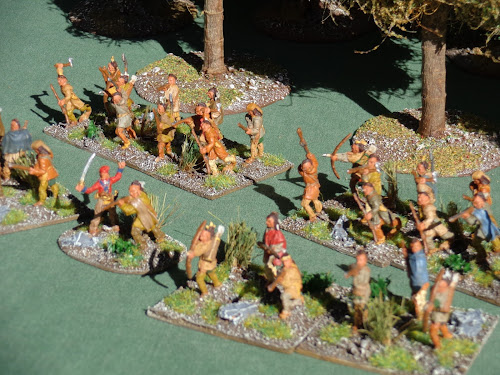 With the completion of the Persians I've passed the 28,000 painted 20mm figure mark.

So by period I have

A trio of units to add to my Alexandrian successor armies. Although the figures are Persian I'm sure similar attired unit would have fought for the various Asiatic successors. 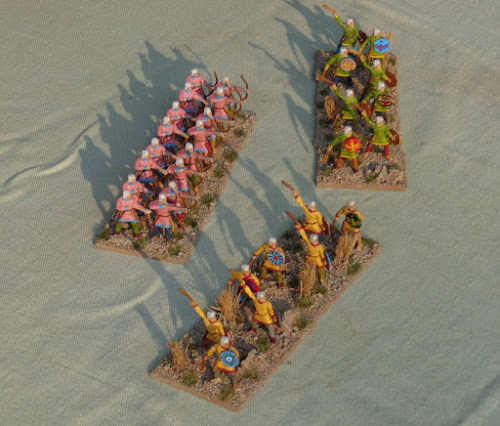 Figures are from the Hat Persian Light Infantry. These were the obvious units to make from the figures available in a single box. I might consider making some more units if I can find enough figures to make head swaps a possibility. The Babylonian archers would be possible in open order, but I see them as much more a close order unit. 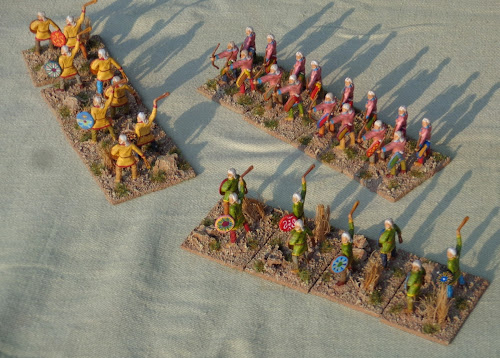 Raised by Major Rogers in 1755 Roger's Rangers was a significant colonial unit in the French and Indian wars and commemorated in the famous film of the St Francis raid "Northwest Passage" The figures are from the Waterloo 1815 set Roger's Rangers and provide a useful set of figures based on the film.

I created a couple of skirmishing units, a command stand plus a couple of casualty markers. 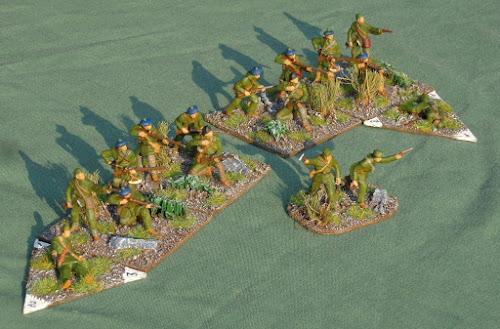 The figures are a bit large, but in separate units they should be OK 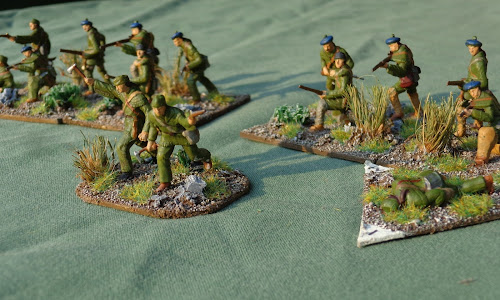 I'll be using them for both the AWI and the FIW.
Posted by Fire at Will at 19:42 No comments:

Back from North Wales

Had a week off walking the coast paths of the Lleyn peninsula. The weather was a bit mixed and I had some fun navigating in hill cloud. In passing I managed a couple of historic sites.

Criccieth castle, originally built by Llywelyn the Great, but enhanced by Edward I and II a stunning location. 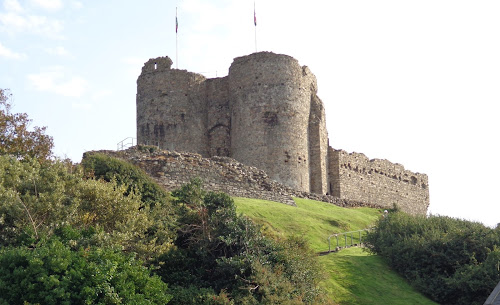 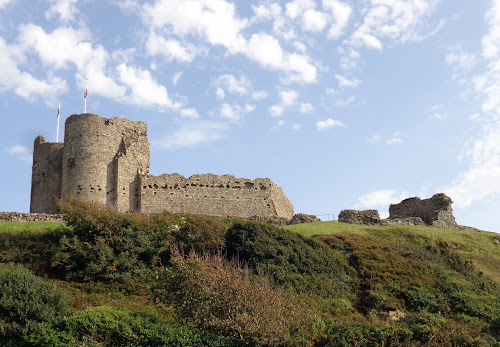 Tre'r Ceiri, the largest of several hillforts in the area that was in use until at least the 4th century. 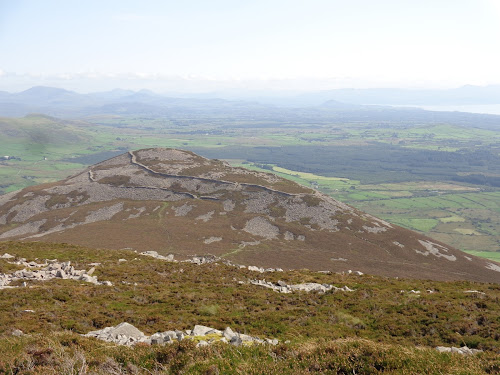 The walls are quite rough stone but over two metres wide and the site is covered in the remains of roundhouses. 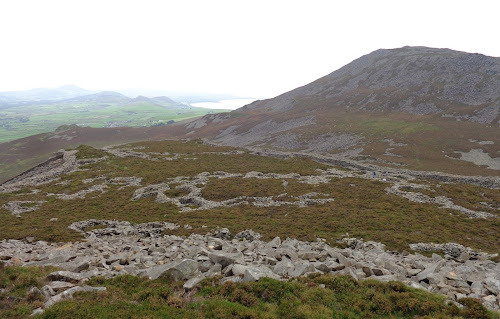 Now back to some painting

The Black Powder supplement "The Last Argument of Kings" has a French and Indian wars scenario, that needs more Indians than I currently have painted. So it was convenient that I picked up some extra Italeri AWI Indians, I painted most of these up so I could reorganise my existing figures into two war-parties.

I also took the opportunity (!) to rebase them all because the originals were all based as skirmishers for my AWI rules. Part were kept as skirmishers, but the more aggressive looking figures were transferred to warband bases. Each war-party consists of two units each of skirmishers and warband each comprising two bases. A couple of command bases finished off the project 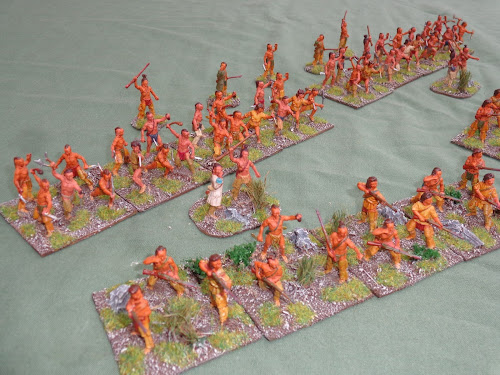 Having got ahead slightly in August I've decided to tackle several of the remaining items on the year plan. I think it's important to keep up the momentum as I'll get distracted once the PSC kick-starter 25pdrs arrive. So the main theme is the French & Indian War