My other unit of Hussars this month are from my imagi-nation and represent the Schwartzgarde Hussars. Originally I had intended for the braiding to be red, but I was so pleased with the effect of the white undercoat I left it as is. Therefore the figures are very similar to the Prussian hussars. 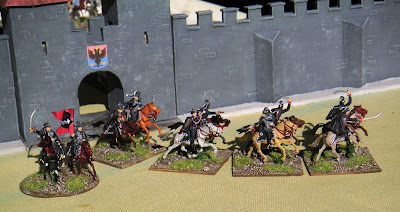 The figures are from Zvezda and are substantially larger than the Revell equivalents.

The commander of the Swartzgarde, Count Vladislav, has his own personal standard.
Posted by Fire at Will at 16:02 2 comments:

As far as I can discover the Piosasque Hussars were never used on the battlefield, but only acted as a small gendarmerie unit, but I'm not letting that stop me from using it. 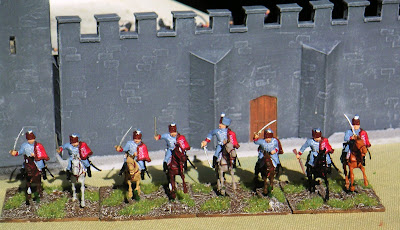 Uniform is taken from the Leuthen Journal and the only thing I'm not certain about is the colour of the pelisse. Figures are the classic Airfix Hussars, but mounted on the new Zvezda SYW Prussian Hussar horses.
Posted by Fire at Will at 18:01 6 comments:

Some more rework, this time an Airfix 88mm and tractor, they had been sitting to one side for a while, then I found some suitable crew figures.

Also in the picture, another pair of £1 acquisitions the Matchbox sdkfz 11 and a Fujimi sdkfz 222.
Posted by Fire at Will at 06:49 3 comments:

Here are more acquisitions from the Crewe show, they were all assembled at £1 each, but there was an amount of rework needed to make them presentable, including removing excess adhesive.

After the Russians here is the German equivalent from the Zvezda Art of tactic set, the German 20mm Flak 38. Quite a simple model and reasonably easy to assemble, with the exception of the sight, which had no fixing point. It might be bad moulding as one of the models did have a slight impression of a possible hole to fit it into, but given I had assembled the rest it was impossible to drill it out. 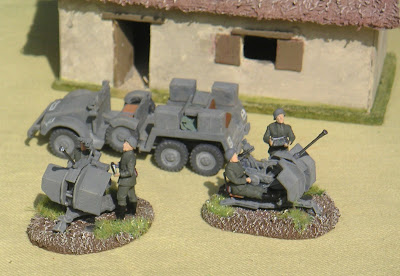 In the background is a Eidai Krupp protze that I picked up for a £1 at the Crewe Modelling show and painted at the same time.
Posted by Fire at Will at 11:25 No comments:

Just what I needed for my Russkies, a couple of 37mm AA guns. These are sold as part of Zvezda's Art of Tactic range and at only £2.50 each they were a good buy. Assembly is quite straight forward and the crew is provided. it obvoiusly shows it's Bofors lineage, but I don't know it can be used for other bofors versions yet.
Posted by Fire at Will at 12:46 1 comment:

While preparing for a game a couple of weeks back I picked up my fusiliers to find several figures loose from the base and the flag still needing fixed from the last time they were used. So I decided it was time for a rebase and touch up. Unfortunately I couldn't find an easy way off re-fixing the flag without damaging it, so it has now retired after over 30 years service. The unit has also changed from the 7th to the 23rd Foot. 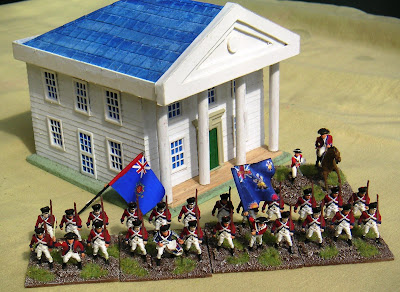 In addition I also rebased my German (Hessian/Brunswick) grenadiers, just to see how much easier it was to rebase figures that were still firmly fixed to their bases. 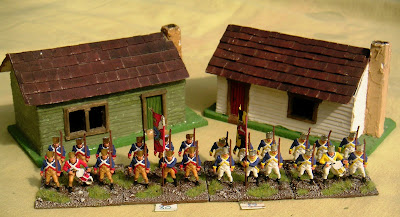 Overall starting from existing basing didn't save much time, so for other units I may just rebase from scratch.
AWI blog
Posted by Fire at Will at 15:19 8 comments:

With the recent good weather I've been able to continue work on upgrading my trees, The remaining twelve trees were treated with my new sawdust mix, it's lighter then what I used to use, but that should provide some contrast. 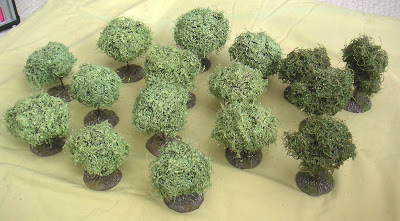 In addition I finished four new trees made using plant prunings for the trunk/branches. The big problem here was fixing them securely to the base and I ended up drilling out a pilot hole and then using a countersunk screw to fix it in place. Quite a bit of effort for a marginal improvement in appearance. 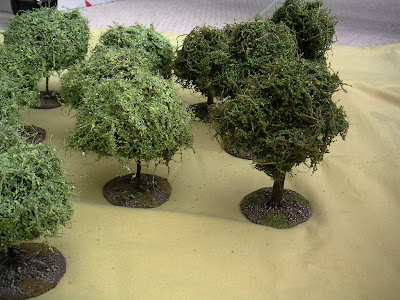 A before/after picture is in an earlier post
Posted by Fire at Will at 21:29 4 comments:

Right, the army is now finished in terms of pure Swiss units, Under WRG6th lists it can be made up with various allies, I'll be using various other figures from my collection for this. Longer term I would like to add some more crossbowmen and some handgunners (wish Strelets would bring out a set of these) So Halberdiers, this are organised exactly the same as the pike, with 8 figures to be attached to each cantonal pike block. 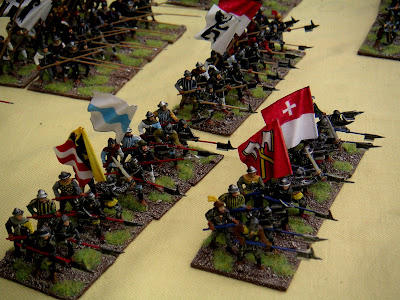 For those who like to see these things, here's a close up of the halberds, made using paper/card added to the end of a welded on bit of florists wire. The shiny one was an attempt to fix the part provided in the set, it looks OK from this direction, but wasn't worth the effort. 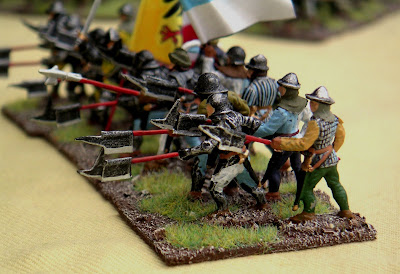 Crossbowmen, the flag was a copy from the Osprey book. 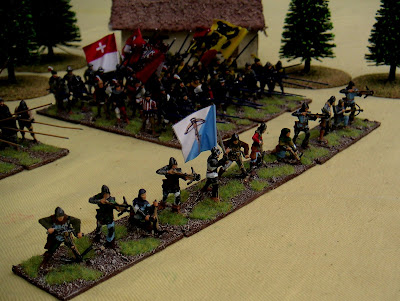 The whole army emerging from the woods 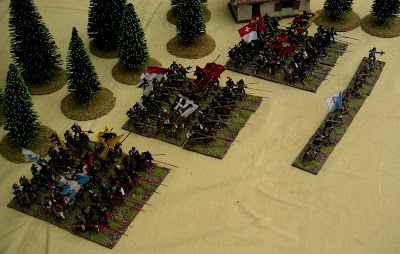 A slight waste of a gloriously sunny day spent at the northern branch of the RAF Museum. Having done Hendon earlier I felt obliged to visit Cosford as for years I have driven past it always saying maybe next time I'll stop off to have a look. Instead I planned a special visit to coincide with the Shropshire Military Modelling Show.

Although it has similarities with Hendon it is quite complementary with more emphasis on the Cold War and a differnt range of aircraft. The TSR2 is particualrly impressive. I didn't take many pictures as there was so many traders and society stands around. 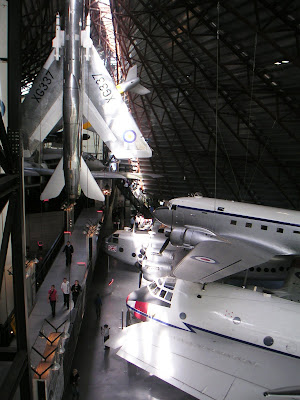 Obviously for an aviation museum most of the stands are aviation related, but it's always useful to look at the broader aspects of the hobby. I have to build a P38 Lightning in the Aegean for this years big game, but I haven't been able to find any references, I tried the booksellers, but no luck except for a very expensive sealed copy, but then near end I found a copy of the relevant Ospey Aircraft of the Aces for sale on one of the club stands, sucess!

I also picked up the new Zvezda 20mm German flak and Russian 37mm AA, and they are nice crisp models. I think they will jump the painting schedule!

Rather than head straight home I popped along to Wroxeter to look at the new Roman villa. 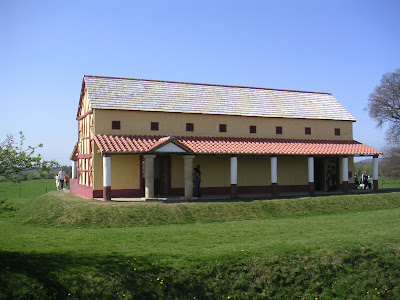 I was a bit dissapointed, but I think this was due to have been been to Pompey/Herculaneum recently. It certainly helps people to understand the site.
Posted by Fire at Will at 21:32 2 comments:

Not the most exciting aircraft of WW2, but the most common fighter used by the French in 1940, so only having a Dewotine at the moment the M.S. 406 it was an obvious addition to my forces. 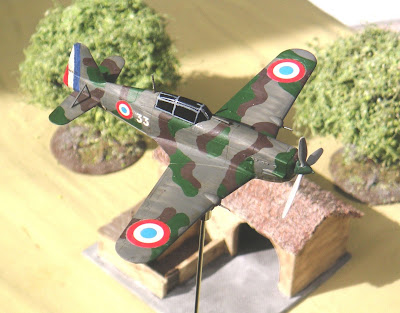 Not only did I have problems with fitting the pilot (like the LA-7) but the Hobbyboss kit only came with British and Finish decals, so I had to buy some second hand ones. Then the trouble started, the first roundel disintegrated as I tried to position it and part of the second broke up. Therefore I experimented with painting the decals with acrylic varnish first. This gave the decals sufficient strength to position them carefully. Maybe next time I'll give a bit more though to which kits I request for Christmas.
Posted by Fire at Will at 17:19 5 comments:

First of my aircraft now done, a Soviet LA-7 as operated by Ivan N. Kozhedub, 176th GFAR. I've gone for the two-colour grey upper surfacebecause it seems a better fit to the evidence, but also so I could use it for winter games. The model is by Hobbyboss. 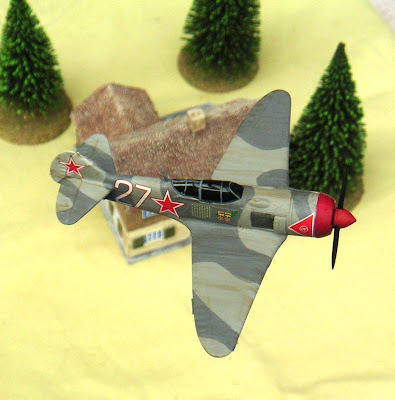 In the above picture the stand has been removed. 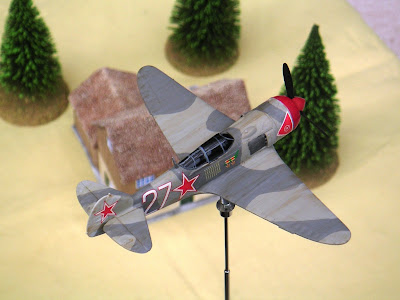 While writing this I also realised that I need to create some aircraft bases for use on snowy terrain (white cloth)
Posted by Fire at Will at 14:37 7 comments:

Looking at my posts it feels like slow progress over the last month, but progress was being made. I now have a clear idea of what terrain is needed for the Gauntlet game and have started cutting more bases for the walls, plus sorting things out for various future projects..