British Infantry for the Sudan 1885

As followers might have guessed, I've been away on holiday and I had to make a change of plan on the painting front ready for this weekends club event. So I switched over to producing some more British for the Sudan.

These are completed, not quite the correct uniform, but close, using the old Esci Zulu War British. 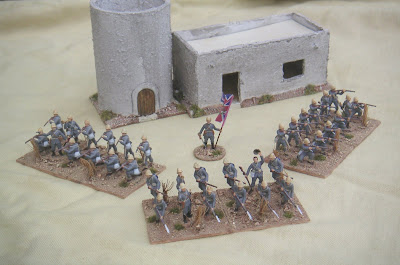 Unfortunately the extra cavalry won't be ready in time.

However I have made progress on the Matilda Scorpion and it only needs markings and a heavy drybrush to complete it. 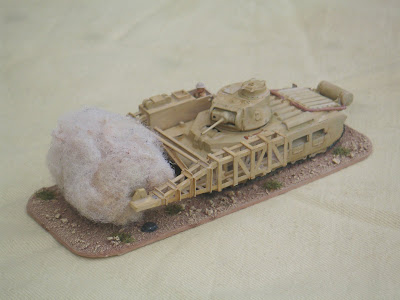 If you are nearby please pop in to see us at the Airbus Sports and Social Club, at Broughton, Chester CH4 0DR, this weekend

While working on the basing for the scorpion I also rebased the remainder of my Italian infantry. The majority were rebased for last years big game. Figures are mainly Waterloo 1815 plus a few Italeri. 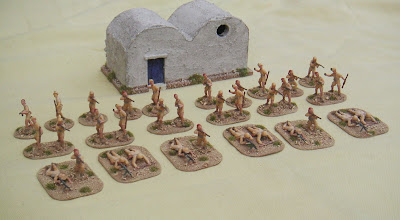 I only need these to make up numbers when using early period Italians who have less heavy weapons.

With the basing completed, its back to assembly. I also painted some parts of the vehicle that may be difficult to reach when completed.

The right hand side is now fitted and checked against the left. Now I have added the main support beam, which is why I replace the kit track guards with the moulded on spare tracks 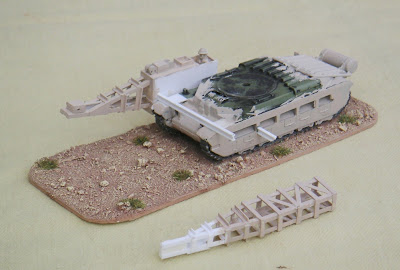 Well after a disrupted weekend, some progress at last on the Matilda Scorpion. Both side frames are now complete. There has also been a change of approach, since I found the frames were offset from the hull sides, hence the supporting frames added to the hull. 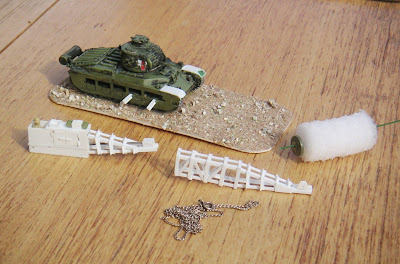 I also decided that I would model it in action, so I cut a core out of some packaging. I'll fix some chain to this and then cover it with some cotton wool "Dust".

Normally I wouldn't base a vehicle, but I think this one may be a bit fragile and front heavy.

Mojo, unlike the Sherman flail the Scorpion had a separate engine and the early versions had an operator seated with it. The later models had controls connected through to the tank.

Archduke Piccolo, the 2 pdrs in the last post were by Minim and have a resin base and metal gun and shield. Still trying to find a crewman to fit.

My conversion of a Matilda to a Flail version is progressing slowly as it's quite fiddly and I'm trying to make sure the angles, etc. turn out right before I do anything irretrievable. 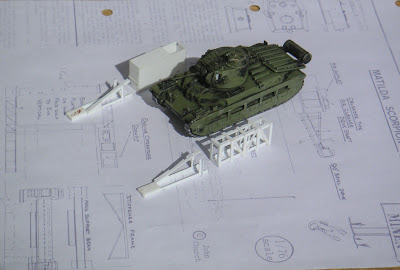 The Matilda, is an old second hand one, that I have cleaned up, hence the residual paintwork. 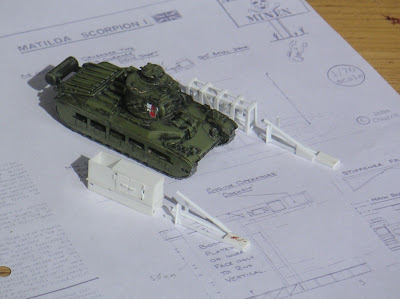 While the glue dries I've started work on the 25pdrs and I've only got three quads and some more crew figures to build now. 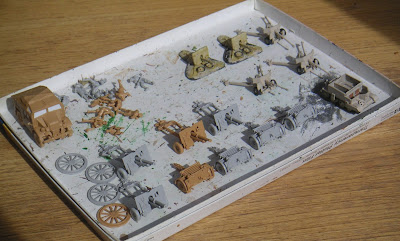 All the priority this month is preparing for the Big Game, but with one exception I have everything needed, but I'd like to tidy up some of the units, which will probably involve rebasing.

Some more substantial progress in sorting out my Italian AT guns. Originally all I had were the Waterloo Folgore gunners and guns, but I have reworked them with new Italian heads by Riever so it was clearer which units they were from. In addition I added in a spare German 37mm Pak 36, occasionally used by the Italians and a couple of 47mm guns made by Minimi. 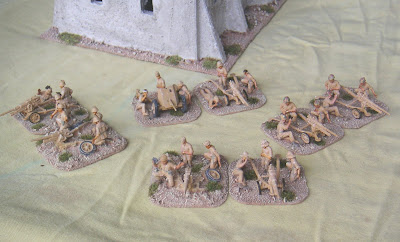 Rebased to current standards they will be added back into their units forcing me to get on and rebase the remaining old based Italians, still around 100 figures.