The final stage of my rebasing my British and Germans for the AWI and SYW. I had already rebased most of the British officers, but I needed an extra mounted officer for the C in C plus a commander for my SYW cavalry brigade I had forgotten about. For the Germans most Brigadiers had an extra figure added. For their commander I added a suitable figure for Reidesel who commanded the Brunswick forces in the Saratoga campaign. For their SYW cavalry I added the Hessian Lieutenant-general Prince Christian Ludwig of Isenburg-Birstein in his white regimental uniform 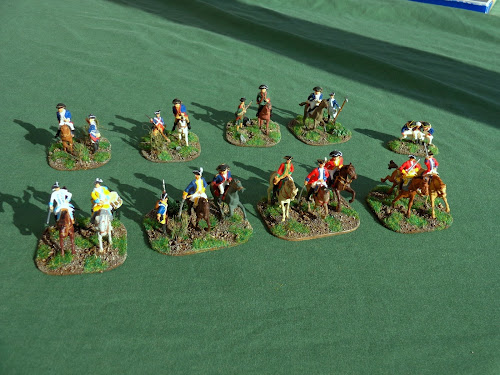 Now onto the American Rebels
Posted by Fire at Will at 12:05 No comments:

Back to the Revolution and the French army of the orient with the 7eme bis Hussars. It was the sole Hussar unit in the army. Figures by Strelets. 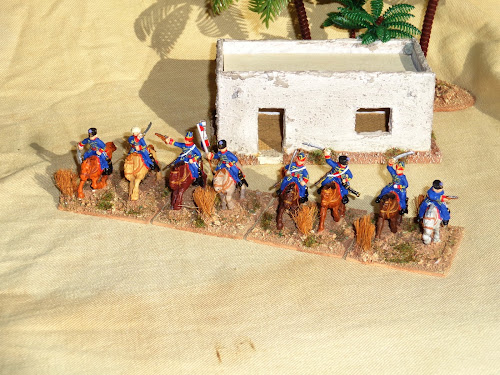 Strictly I should have replaced the incorrect saddle cloth, but if I did that I would really have to replace the shakos with peaked mirlitons as well, so I just left them as is. Here's a correct version by Eugene Leprieve. 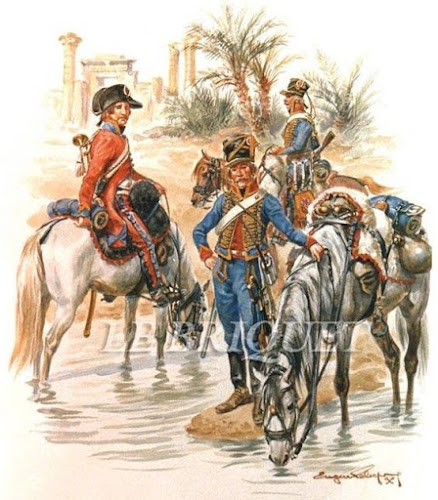 Although in similar condition to the Brunswicks with regard to brittle plastic disease these Hessians suffered from a lot of paint flaking. It seemed that every time I thought I had touched them up another flake would appear. In fact the last occurrence was a hat flaking just as I finished the basing. 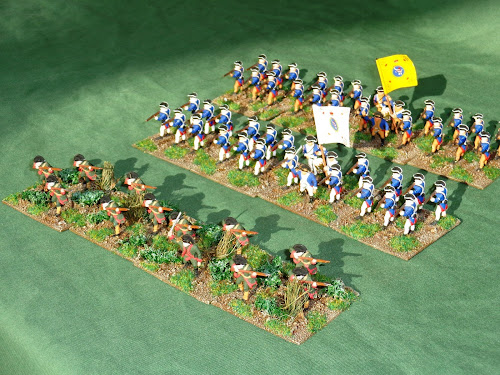 The two infantry regiments are Von Trumbach (later Von Bose) with white facings and Von Donop with straw facings. Plus some Jaegers to deal with the pesky Rebel riflemen. As all the positions were identical I had to rebase them to give the appearance of echeloned for firing, originally the rear rank were firing at the heads of the front rank! 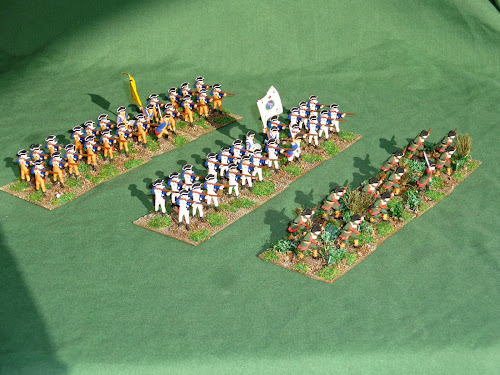 Many years back I acquired an Italeri Union Artillery set, which included a Mortar. I assembled and painted it and the crew at the time, but couldn't decide how to base the figures up so they were consigned to the "painted but no current use box". The Wargamers' Forum had a "shelf queen" challenge and I thought of these, but the challenge ended before I rediscovered the mortar. I have now found it and based up the crews so it can be used as either side. 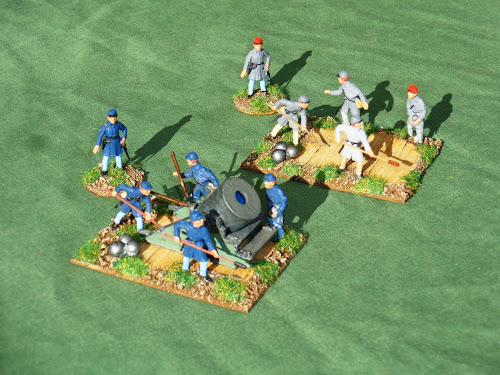 British Infantry in Egypt 1800 - doubling up

It's been a while, because three batches of painting gradually merged into one big batch and here they are finished. I had to shuffle some figures around to make up the units correctly, So the Foot Guards are completely new figures except the officer and standard bearer. 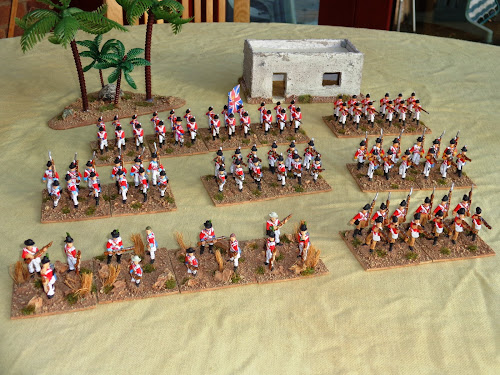 The combined units, quite an impressive force. 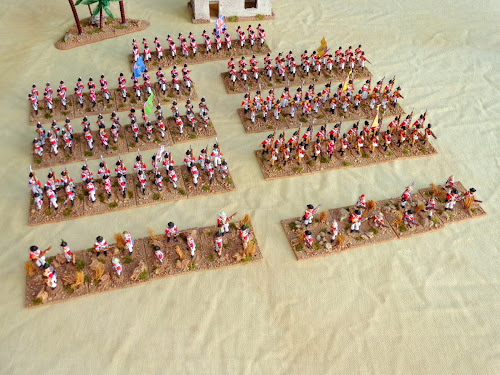 Working on these has been a trip down memory lane as they are among the oldest figures still in my collection. They were originally painted in the early 70s as my contribution to the Bath Wargames Club's Saratoga campaign. No sign of the dreaded brittle plastic disease and there is still plenty of flex in them as was demonstrated by the need to repaint almost all the musket barrels and ankles. 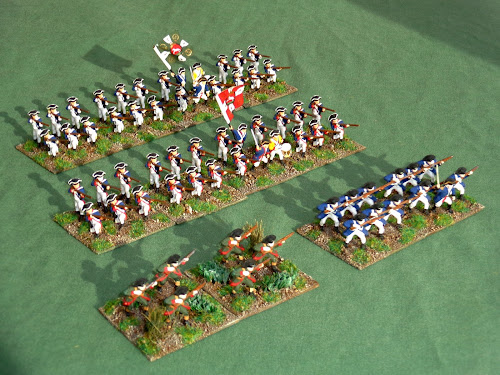 Front to back, Light Battalion (including a Jaeger company), Regiments Von Specht and Von Rhetz . I also took the opportunity to mix up the poses between the two infantry regiments so the front ranks were kneeling and the rear standing firing. 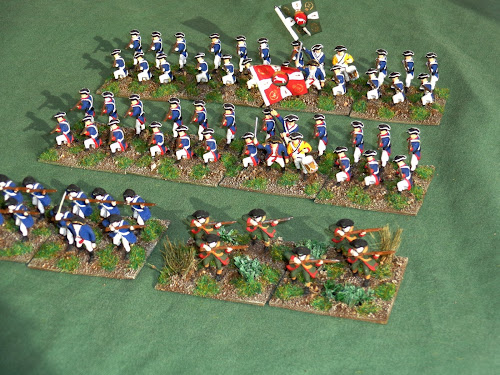 Overall a lot of effort that might have been better spent painting some replacement figures, but the memories would have been lost.
Posted by Fire at Will at 13:58 5 comments: 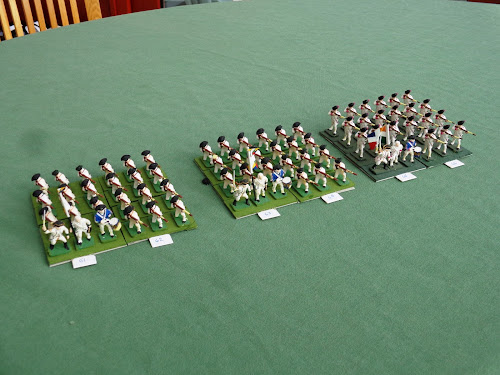 Continuing on with the rebasing my British command bases have had an extra figure added. In addition I painted up two new units some light infantry using the Call to Arms figures and a dismounted Light Dragoons using the Strelets British Light Infantry in Egypt. Finally a Hessian artillery guns and limber. 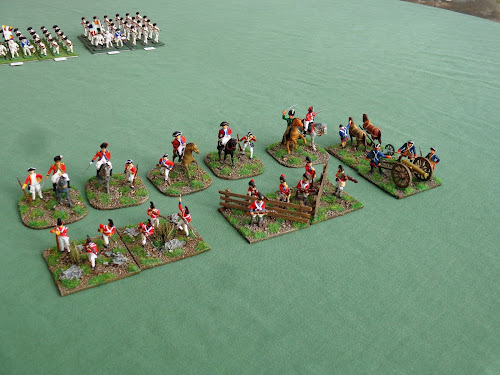 I thought it would add a bit of interest to add a fence to the light dragoons base. 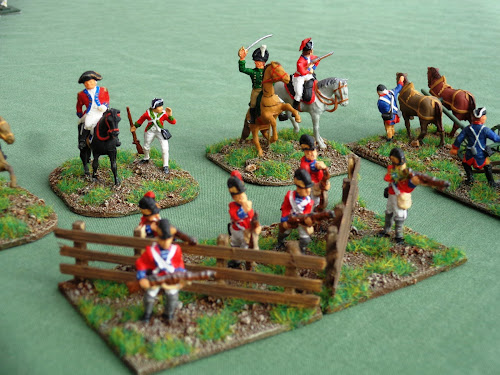 Another month has flown by, not difficult when you take a couple of weeks out to get some winter sun.

A early start to cross the Pennines into Yorkshire for Vapnartak, always a great beginning to the wargaming year. The show seemed quite busy and for longer and I was heavily engaged on the Lance & Longbow stand and didn't get a chance to play in our game. As a result I didn't get to take as many pictures of the eye-candy as by the time I got around several of the games had finished. However I did get to speak to a lot of folk through the day.

We had quite a number of participants for our game of Stanford Bridge 1454 a Nevill v's Percy bash. 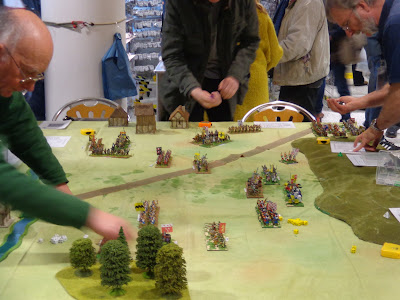 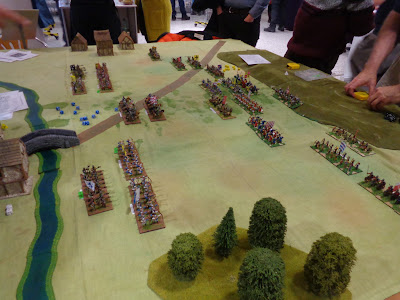 The usual YWS static game of the arrival of the Queen at Bridlington in the ECw. 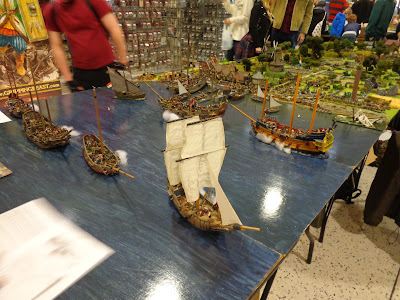 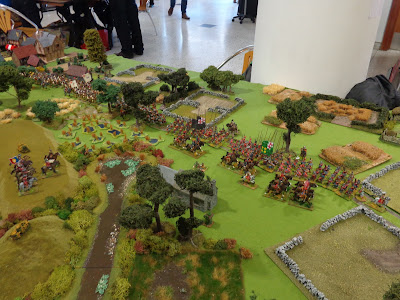 Again more of the same with a variation of the WW1 middle-east game. 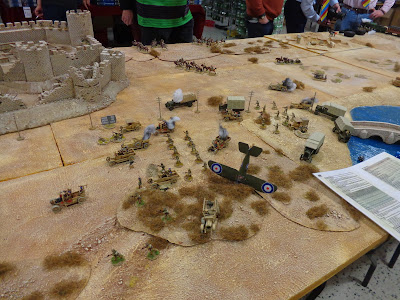 The arabs derail the train! 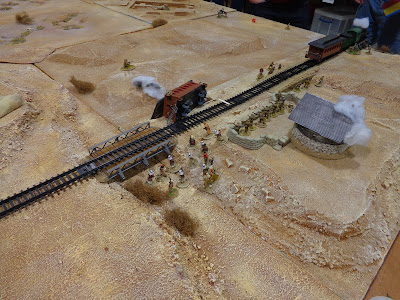 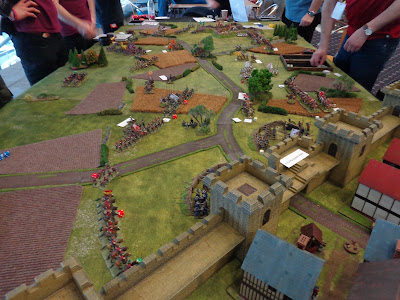 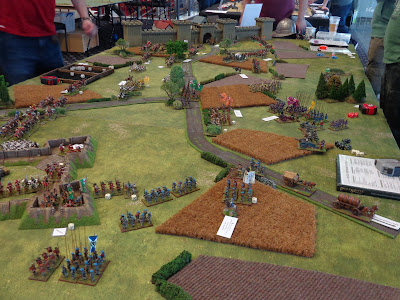 Indiana Janes and the ... lots of nice modelling. 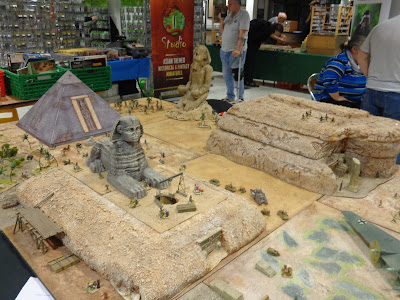 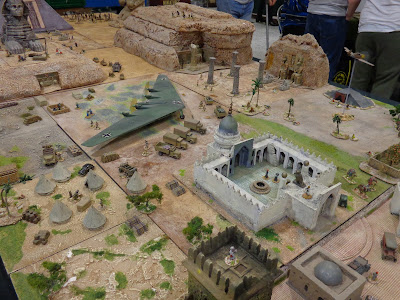 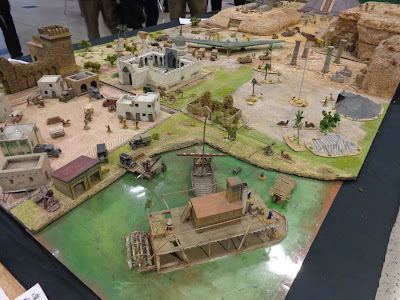 The other advantage of being busy was that I didn't spent too much just three discounted boxes of plastic figures from the tablesale, three wrecks from the EWM miscasts box plus the new 20mm Valiant Germans and a Ready to Roll Humber LRC.
Posted by Fire at Will at 21:38 1 comment:

I've sorted out my army surplus ready to take to Vapnartak on Sunday, weather permitting. A mix of old painted figures that I've replaced, plus remnants from various projects. 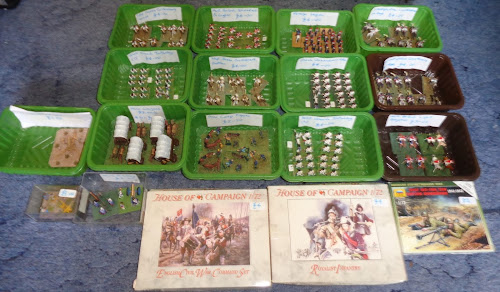 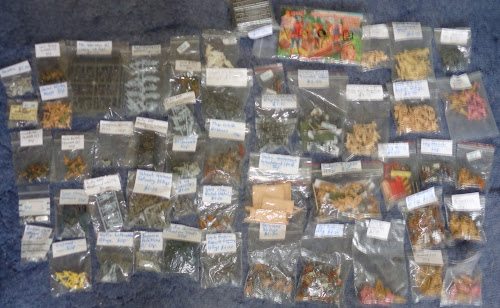 I'll be on the Lance & Longbow stand so please say hello if you are passing, or even join in the game of Stamford Bridge 1454 a Neveille v's Percy bash.