Off to Vapa tomorrow

An early start to get to York tomorrow. Seems like I've got a lot of people to catch up with when I'm there. Plus I've got my Xmas money to spend.

I have completed the Boxers but I won't get chance to photograph them and post them until Monday at the earliest.

If you are there, I'll be on the Lance & Longbow stand, or spending money with the traders.

Having finished four more regiments, I thought it was time to review my Austrian forces.

It's now a reasonably substantial force with 6 full infantry regiments, 3 battalions of infantry (half regiments) one battalion of grenadiers, a regiment of jaegers and a battalion of lights. This is supported by two regiments of medium cavalry and two of light. The artillery has 4 foot batteries and 2 horse batteries. 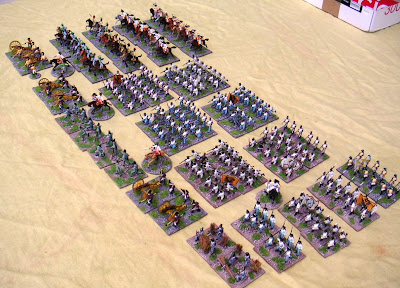 I still plan to increase the Frundsberg contingent from one battalion up to two full regiments plus a jaeger regiment. 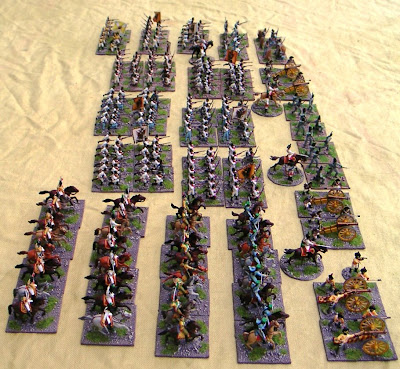 Initially I'll use my AWI rules with some modifications to give a period feel.
Posted by Fire at Will at 13:07 5 comments:

Yes, there has been a bit of a gap in posting, but I've now completed 4 full 24 figure Austrian regiments for 1800, which took a while. All of the units are taken from the Marengo OOB. So I have two German regiments, Hohenlohe (Light Brown facings) and Wallis (Pink), and two Hungarian, Anton (Dark Red) and Spleny (Dark Blue). This over-expansion was due to some rather enthusiastic trading, and I couldn't resist using the figures. In addition it means I will also increase the Frundsberg auxiliaries and still have some spare bicorne figures left over for conversions. As another consequence I'll have to expand the French. 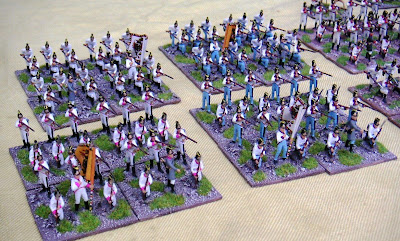 For those that are interested the flags are almost the last of my flag sheets acquired from Almark many years ago.
Posted by Fire at Will at 19:57 1 comment:

Yes, it seems like good things arrive in three's. First there was the new Rapid Fire book in pdf form covering Russian tank units 1941 to-1942 (link). I'm only part way through, but it is full of lots of different units that can be used in various scenarios. The only downside is that, as always, I'll need more vehicles, and not just the common ones.

Second was my new laptop, delivered this morning, I've been deprived of my own computer for over 3 years and this will enable me to capture my thoughts/jottings as convenient to me. The only downside is learning to cope with Vista. Hopefully, once I have it working OK, I can try Tony De Lyall's computer version of my AWI rules as I suspect my Basic version will not work on the new machine.

Finally, shortly after the laptop the postie delivered the Tabletop Teasers book (link), a quick flick was all that I need to convince me that it was an excellent purchase and will produce lots of memorable games
Posted by Fire at Will at 19:22 No comments:

Another Christmas present completed(*) This time a Messerschmitt Bf 110E-1. I don't have many large aircraft and this might be the beginning of a trend as there are a number of heavy fighters and light bombers that tempt me. The only problem is storage as they do tend to take up a considerable amount of space. Being able the disconnect the aircraft from the aerial helps. The planes are then packed away in bubble wrap until needed. 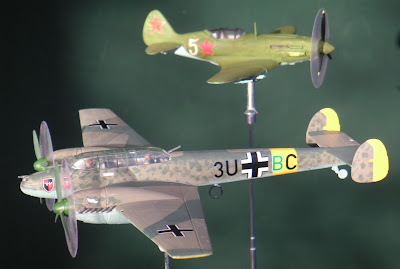 The model is by Revell and I was pleased to find it didn't have too many parts so quite a quick build, but painting the mottled camouflage took a while using a bit of sponge. The aircraft itself is modelled as the one flown by Hptm Ralph van Rettberg of Stab II ZG26 in Russia June 1941 (hence the MiG 3 in the background)

* yes, I spotted that the rear wheel hadn't been painted after taking the picture.
Posted by Fire at Will at 13:18 1 comment:

The high point (depending on your perspective) was that I reduced the plastic stash by nearly 4,000 figures. This was done by a mix of trades and sales at shows. The trades were the most beneficial as they provided me with figures that I would otherwise had to buy and also figures that are no longer commercially available. Certainly trading via the Trading Department and other forums worked well.

On the painting front I completed 1,374 items, down from last years performance of 1,559, but the itemised performance shows a significant shift in emphasis.

So a massive shift towards cavalry and medievals, reflecting my objectives of completing Parthian (virtually all cavalry), Teutonic Order (medieval and lots of cavalry) and HYW English (only foot so far). Hidden amongst these figures are all the Italian forces mustered for the Society of Gentlemen Gamers big game and the sudden flurry of AWI activity was occasioned by work on 2nd Saratoga.

The rules for Desaix in the Desert are now usable, (but subject as always to ongoing refinement) and a first draft for 1683 is almost ready.

Hopefully I've been updating all my blogs more often, but the Frundsberg one has fallen off during the latter part of the year, but watch out, they will start action in Italy soon.

Other highlights of the year includes lots of refights of Marignano with the Lance & Longbow Society; the Andrevian civil war game at Gauntlet, and the Gentlemen Pensioners Borodino game all interspersed with the regular club games at Deeside Defenders.
Posted by Fire at Will at 20:35 3 comments:

1) The SOGG big game of 1941 – I need to produce a RF battalion of Greeks and a company of Gendarmerie, plus some Australian figures to modify my desert British into Australians.

2) The other is the SOTCW game at Gauntlet where my main effort will be on terrain as any figures not provided by others will be available from my existing collections. I'm intending to provide some “extras” such as the Auster AOP.

If 2008 was an ancient/medieval year, then I think 2009 will be a consolidation of the armies produced last year and earlier (e.g. sort out army lists add any odd extras and use them) e.g.

I’ve still got a stash of nearly 7,000 figures, so I will continue trading/selling figures, but certainly not at the level of last year.

Purchasing, in line with the above, I’ve no major plans so it will be whatever strikes my fancy in the coming year, with one exception... the plastic 28mm ECW figures as they will really tempt me to expand my small metal ECW force.
Posted by Fire at Will at 19:15 1 comment:

A change of emphasis in January from the end of 2009, although I'm still going to build a Me110 that I got as a present, the main items will be Boxers and Austrians.
The Boxers are my "surprise build" over on the Guild - I nominated five different forces that have always languished low down in my painting queue and this one was selected by the Guild members.  I'll use the figures in either Boxer Rebellion colonial games or for the back of beyond.
The Austrians are the result of a trade though the Trading Department by which I obtained them in exchange for some model kits.  Very useful as the figures are very difficult to find at reasonable prices.  They will be painted to provide more support against the Revolutionary Wars French.
Posted by Fire at Will at 08:07 No comments: