A little extra from the oddments tray - These are Valdemar figures that I bought on ebay as I thought they would be quite suitable for the Grand Master and his entourage. All the rest of my Teutonic Order is based for WRG 6th, but for this I decided to make a more imposing command group for Hail Caesar, etc. 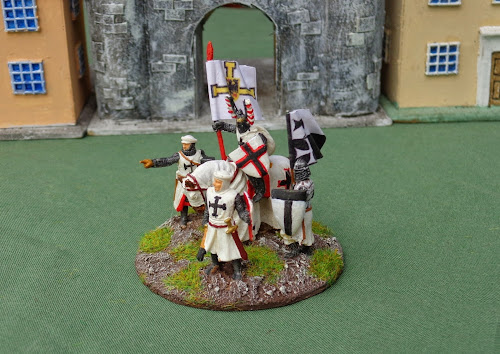 My original plan had been to create two Austrian grenadier battalions for the War of Spanish Succession, but instead I decided that one would be Bavarian and I'd paint each as two separate sub units so they could be used when necessary as small units in Black Powder. 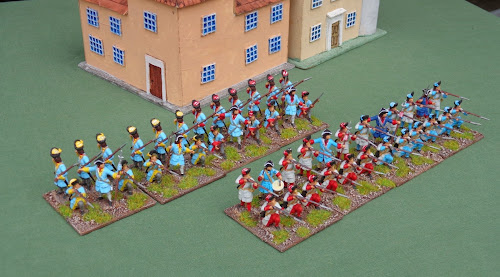 The figures are Zvezda GNW Russians with Hat Napoleonic Austrian grenadier bearskins. I've been quite surprised so far that gluing the two together with superglue gel has worked well despite the handling in painting, etc.
Posted by Fire at Will at 22:00 No comments:

While working on the Saxon guns I realised that when I sold off my original Strelets Great Northern War artillery I hadn't replaced some of the guns and crews with the new Zvezda ones. So here are my replacement Frundsberg and Swedish guns and crews. 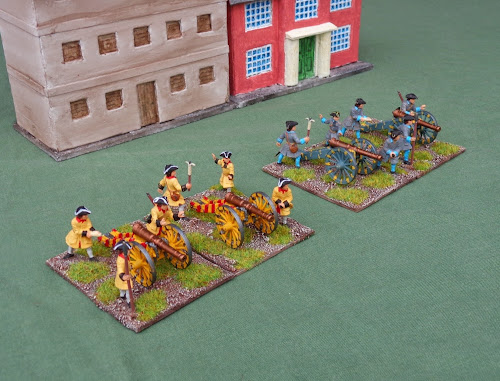 To add some more variety to my forces for the Great Northern War/War of Spanish Succession I decided to paint my "spare" couple of infantry units as Saxons. In addition I added a couple of guns. The figures are Zvezda and the uniform/painting guidance came from Dan Schoor's excellent Notes on the Saxon Army 1700-1716. 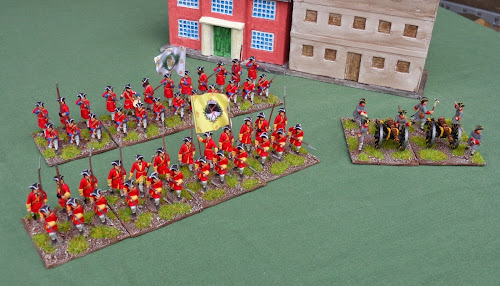 Of course I now need some more cavalry to keep the force balanced.
Posted by Fire at Will at 16:10 5 comments:

Or two weeks in purdah as I've had no internet connection for a fortnight while BT dug up the village and swapped everyone phone lines around. It's amazing how much you come to depend on the resources of the internet and regret not downloading some of those details you need to finish off some figures and vehicles.

Hopefully service is back to normal and hopefully I start adding some updates tomorrow.
Posted by Fire at Will at 13:13 1 comment:

A quick look back at my plans shows I've got quite a bit of catching up to do, but for once I've got hardly any US to paint and even those can wait till I pick up a few more bits at the Recon show in December. Hopefully, despite being in Bath again, I'll make substantial progress on the following:

Given my success with my last conversion of the Pegasus model, I acquired another pack and converted one to the third vehicle for my Rapid Fire US Field Artillery Battalion. I tried to find something different to do with the second model, but ended up just adding a winch to the front and did the same with the converted model as well. 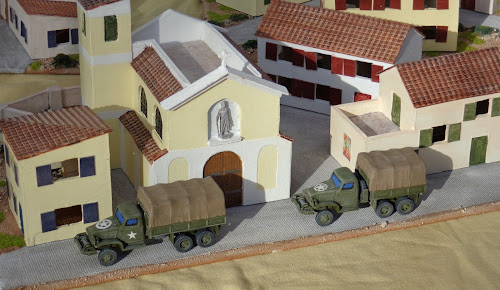 The backdrop are my Italian buildings used for the SOTCW Salerno game played a few years ago and I was reviewing them to see what would be needed to be done to use them for for next years SOGGy big game, where I've volunteering to provide the terrain for one table

I decided I wouldn't stint on the commanders for my forces and created enough for each variation to have their own even though I could swap them around. They're mainly based in threes as per most of the Rapid Fire schematics. 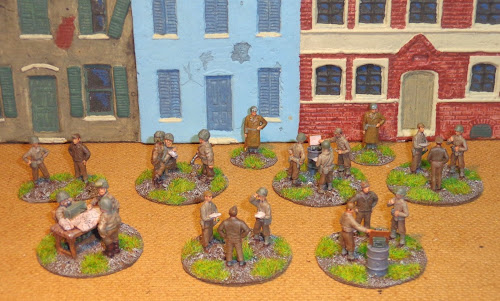 The two triads to the left are Britannia and will be used for my Armoured Combat Command. The rest are SHQ with a few Airfix USAAF figures mixed in, two triads will be used for the Infantry Regiment command and the other two for the artillery battalion HQs.
Posted by Fire at Will at 07:51 4 comments: