Seems to have taken ages, but here are the bulk of the Swiss, 96 pikemen. It took a while working out how to assemble them and what proportion of pike to halberd I should use. I ended up with a 2:1 ratio, so the next stage is modelling the halberds on the next 48 and then painting them. They are organised as three large pike blocks that can also be split in two, each half relating to a canton,(more or less). All the figures are MiniArt Swiss Pikemen. 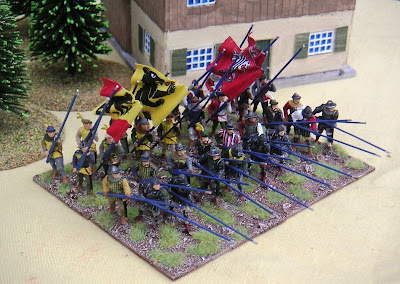 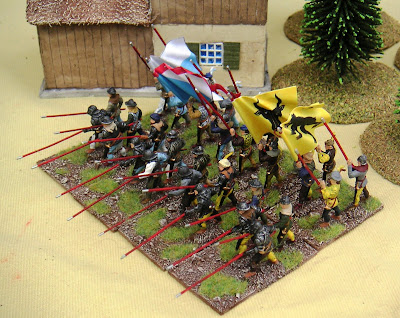 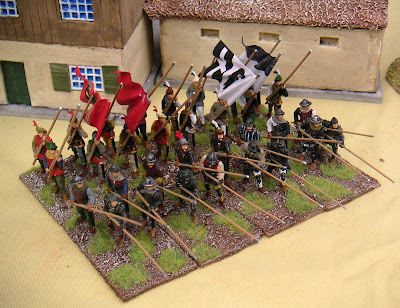 All the pikes are welded on replacements from florist's wire Figures are based for WRG 6th, but the front rank pikes have extra depth.

After what seems like a long wait, Deeside Defenders has a new website.
http://www.deesidedefenders.co.uk
Posted by Fire at Will at 17:17 3 comments:

Been stuck in a bit of a modelling rut as various projects have stalled for one reason or another. On Thursday at the club, Pete and I had a quick check of the plans for the Boxer game planned for the SOTCW at Gauntlet(*) this summer. 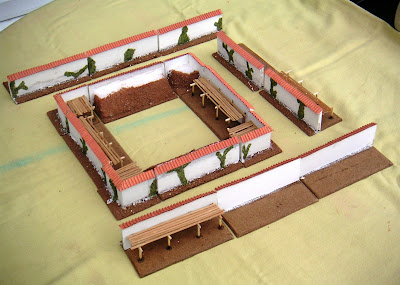 Pete also posted a version over on the SOTCW events blog containing his figures.

The walls are basic foamboard, these were quite rough on one side so I made a virtue of this and added some vegetation over the rougher areas. Tiling is just a strip of corrugated card.

The main effort is adding the firing steps, I've added two sorts so far a timber frame and banked up earth, but I will also add a stone step to the others, but this can be removable.

Result of the test was I now have a clear plan of what is needed, which is about triple what I have done so far. This will also include gates into the legations and also some broken sections.

* Gauntlet will be held on 2/3 July at Broughton Wings Club, Chester CH4 0DR. Unfortunately there are problems with the club website at the moment.
Posted by Fire at Will at 09:28 5 comments:

Had a very enjoyable day out at WMMS apart from some very slow trucks on the A41 on the way there in the morning. Lots of impressive games and each time I left the stand I remembered too late to take my camera and vowed to remember it on the next attempt!!.

Among others I met Ubique a fellow blogger, it's always nice to put a face to a name and he has posted some pictures of the games. Hopefully Alumwell will post some pictures on the club website shortly.

Not a great deal of purchases

Only managed to sell one of my mate's books on the B&B, what a disappointment, seems I am cursed to having these around the house for a while longer. I also sold four old WW2 British trucks, which I had converted from the Airfix Austin K2 Ambulance and now replaced with the QLTs/QLDs that I painted earlier.
Posted by Fire at Will at 13:46 1 comment:

The last of my extras are these Hessian and Brunswick cavalry, which enable my AWI Germans the opportunity to operate in Europe, again under contract to the British Government.

On the left are Hessian Hussars, Von Militz Kuirassiers and Lieb Dragoons. On the right are Brunswick Hussars, Karabiniers and Prinz Fredrich Dragoons.

The Brunswick Prinz Fredrich Dragoons did not exist in the SYW, but it does mean I can use them as cavalry in the AWI as well, if they had found any horses.
Posted by Fire at Will at 13:52 No comments:

I'll be there, but there won't be a Lance & Longbow stand, so I can be found helping out on "Dave Lanchester books". It does mean I'll get some more time to browse the traders and displays.
Posted by Fire at Will at 13:41 No comments:

Just completed a pair of the new Airfix QLT/QLDs. A great kit, with hardy any issues in construction, just fixing the windows in place and I suspect the tarpaulin on the QLT is a bit fragile. The decals were also a great selection allowing a good range of options. 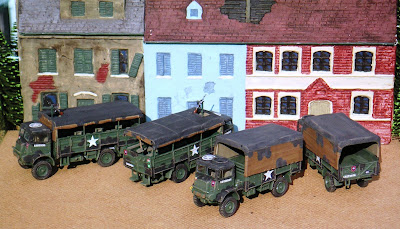 As per most of my Northwest Europe British, these are marked up for the Guards Armoured Division and the QLTs for the 5th battalion Coldstream Guards.

Like my French, the main weight of the army comes from my AWI collection and the only additions are cavalry. In the front are the 16th and 17th Light Dragoons, full strength version of the same figures (Italeri) and units I have for the AWI. Behind are the Kings Dragoon Guards, 4th Dragoons and the Royal Horse Guards.

At the right rear is another home made caisson.
Posted by Fire at Will at 10:39 No comments:

While I had my camera handy I took some photos of the extra units I created a while back to make my AWI armies capable of fighting in the Seven Years War.

Firstly the French. As you would expect it is just artillery and cavalry as the infantry is well covered in my AWI army. behind the guns is one little extra, a unit of engineers.

To the left, Chasseurs de Fischer, Orleans and Royal Cravattes
Posted by Fire at Will at 10:59 1 comment:

A couple of generals 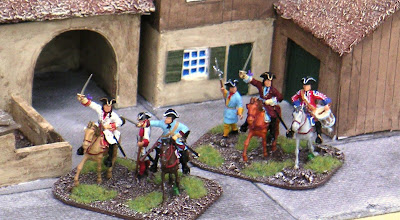 The mounted figures are from the excellent Zvezda GNW Russian Dragoons, I would use more of the mounted officers but I'm not sure what else to do with the rest of the set.
Posted by Fire at Will at 13:51 1 comment:

Ok, fresh from my success from last month another stretch target

Plus I still need to get some legation walls sorted.