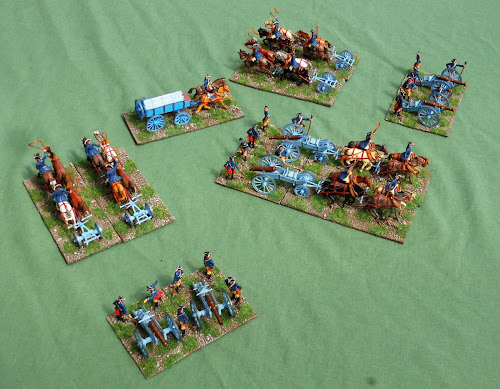 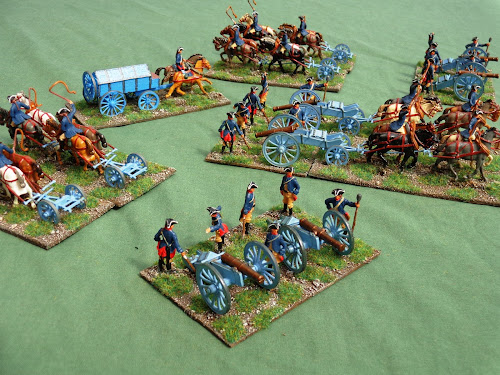 Only the commanders still to do, but I plan to add a few extra new figures to the bases.
Posted by Fire at Will at 07:27 1 comment:

Phew, that was quite a task, 264 figures rebased 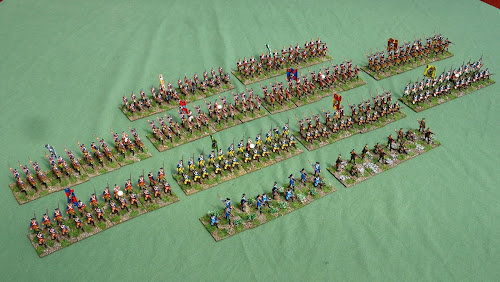 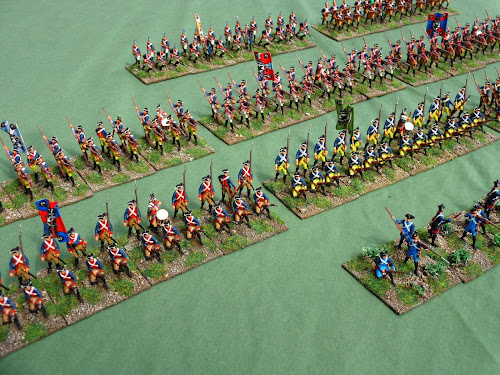 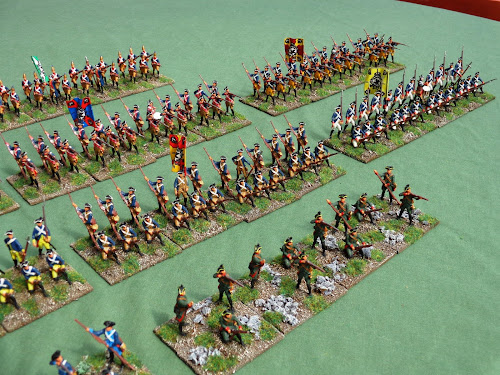 Some more rework, this time a very old ditched road and stream I created for a refight of Lutzen 1632. Finding it in the bottom of a drawer was a light-bulb moment - just the job for Hell's Highway. The ditch was reduced in size and the whole thing textured and painted. The stream has become a canal. 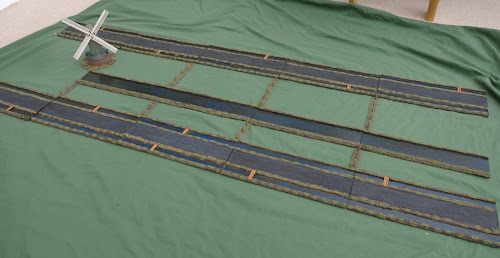 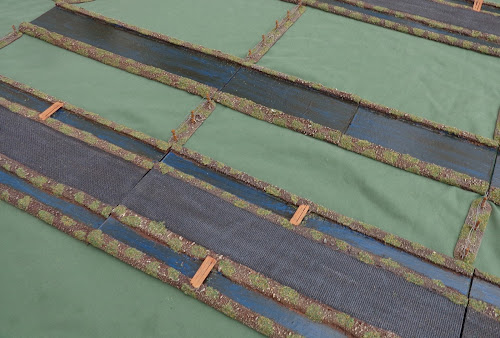 Here's a picture of the original game 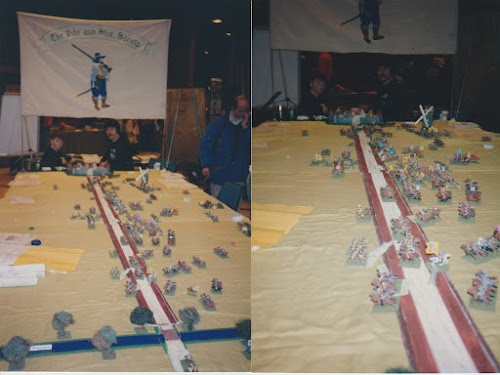 Obviously I now need to create bridges and more canal sections plus linking roads to Hell's Highway
Posted by Fire at Will at 14:06 2 comments:

A relatively simple start to building some terrain for the Battlegroup Market Garden weekend next month.

The wire fences are all new build, whereas the old Airfix windmill which, has seen some service over the years, has now been repaired and rebased. The aircraft base was just re-textured to match. 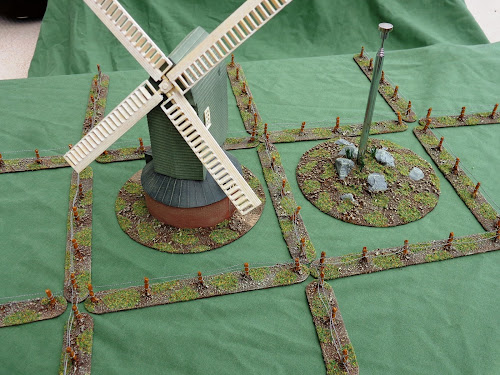 Another impulse purchase as I have no plans to refight the battles around Salonika in WW1, but these figures from Strelets seemed a very suitable unit for the Russian Civil War. 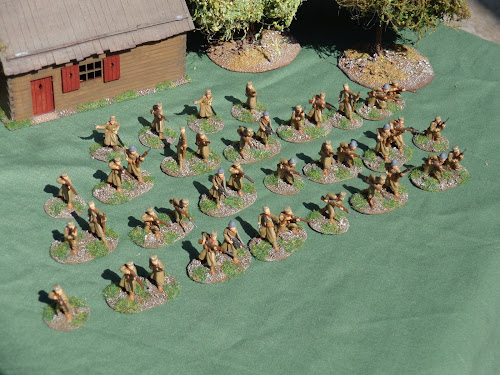 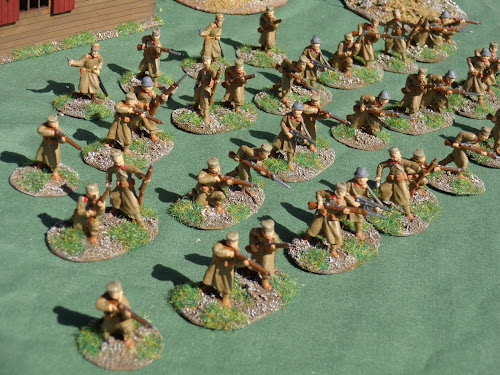 M9 half track for the Ardennes

Appropriately completed on the first summery day for a long time. These are the PSC British M9 half tracks given a tilt and then painted and US decals for use in the Ardennes. 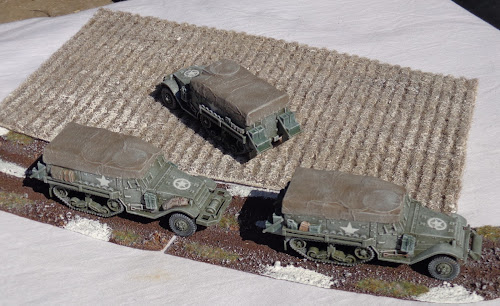 The tilts were the old Airfix ones cut and extended to fit the PSC model then covered with tissue.
Posted by Fire at Will at 15:14 3 comments:

Luckily I managed to get some rebasing done while I was visiting my daughter. These units were originally painted twenty years ago and in general the paintwork has lasted well, just the swords to touch up. I also repainted the colours where the "fluorescent" pink had seeped through in the period just after painting. 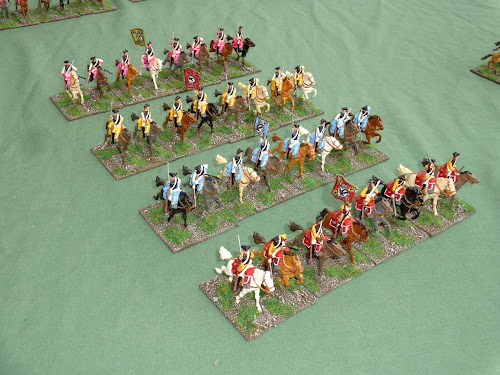 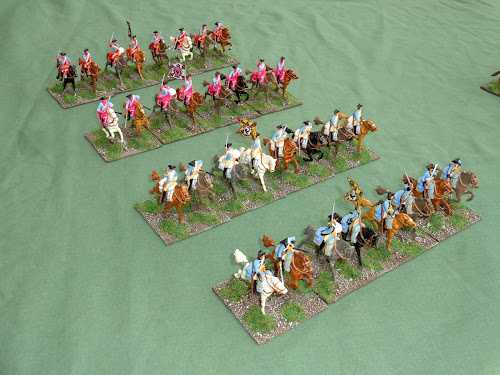 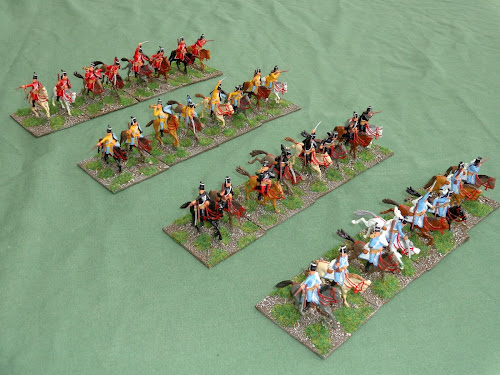 I've started on the infantry, but they are going to take a bit more effort.

The entire army as originally based can be seen here SYW Prussian Army
Posted by Fire at Will at 08:43 3 comments:

Progress to date is 299 items so a rather slow start and quite a few bits were not in my plan!

Looking at my plan for the year

The major project is Tricorne rebasing, covering all my Seven Years War and American War of Independence armies, this is ambitious - around 2,000 figures, but hopefully it should just be "cosmetic" as I won't be physically changing the units or bases.- I've just started on the Prussians

A change in theme this month as I have to concentrate on preparing terrain for the Battlegroup Market Game game in May (there are still Allied and Axis places available via PSC) The main requirements are canals, wire fences and rural Dutch style buildings.

Otherwise I'll be finishing off the items from last month (below) and making a start on rebasing my SYW Prussian Army.