have you seen my friends?

Yes, it's a Romanian R1, made by Milicast and part of my Crewe purchases. It's really tiny as you can see compared to a couple of Panzer IIIs I have smartened up. Two points intrigued me firstly 11 vehicles reinforced the Romanian 2nd Armored Regiment in Czechoslovakia in 1945 and secondly that new models were purchased by Ethiopia in 1948! 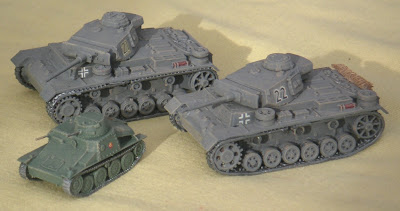 My other effort was on a befehlswagen III for the Afrika Korps, the modelling was the same as my earlier version and at the same time I worked on a couple of extra Panzer IIIs 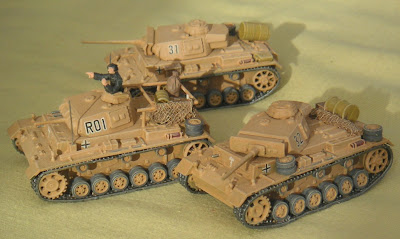 Hopefully I'll post my other desert stuff once I get back from Leeds.
Posted by Fire at Will at 20:08 3 comments:

This time for the AWI or SYW. 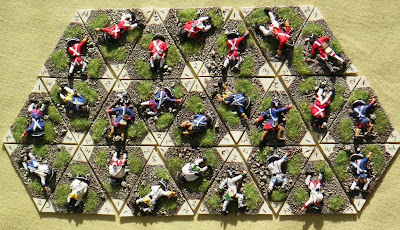 I sorted these out at the same time as the Napoleonics, but they have taken longer as some figures are composites to get the right effect.
Posted by Fire at Will at 19:35 No comments:

At last some progress, first off the HaT cavalry guns, rather too wide and also only provided with the howitzer version. To make the normal gun version I used some left over Airfix RHA barrels. They are rather too wide so it is going to be difficult to find some suitable plastic riders. 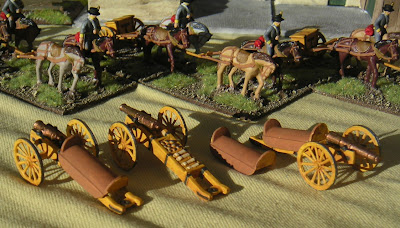 As I already had sufficient (converted) limbers for my Napoleonic Austrian army I decided to convert the drivers into the earlier 1798 style with grey coats and round hats for my Revolutionary Wars Austrians. Given the rather rounded shakos it was an easy job to cut them off, reduce by 2mm, add a circular chad from my hole punch and reassemble. On further checking I found that they were foot not horse artillery limbers 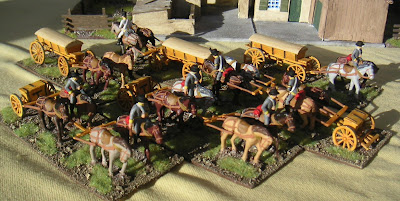 The caissons were split three ways one each for the SYW, Revolution and later Napoleonic wars. 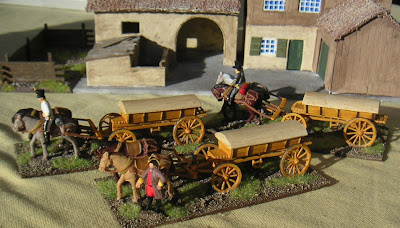 Certainly I'm going to look out for some more round hat conversions.
Posted by Fire at Will at 19:55 5 comments:

The benefits for keeping all those dead Airfix Frenchmen for so many years have at long last been achieved. Here are my latest Black Powder casualty markers. 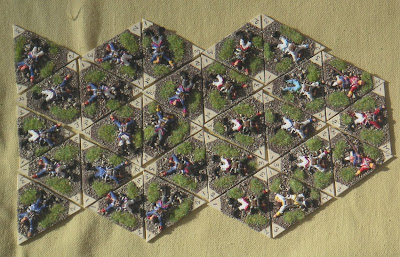 I've taken a picture from above so I can copy and print lots more to use when needed, please do the same if you want.
Will
Posted by Fire at Will at 19:53 4 comments:

AS mentioned on my previous entry I couldn't resist painting some of the Russians from Plastic Soldier and here they are.

The figures at either end are part of my existing collection, which are mainly plastic copies (on right) of the Esci hard plastic Russians (on left). I suspect my decision will depend on the contents of the support pack when it appears.

I'm very impressed, but in a dilemma what to do as I already have sufficient Russians, they could just do with a tidy up and rebase after more than 20 years service
Posted by Fire at Will at 16:42 2 comments:

After failing to realise how far through the month it was when I last posted and Taking a longer holiday than planned, I've got quite a bit carried over this month.

By the end of the month I'll be at Fiasco

Only slightly behind the French camp I've completed another set of figures from Strelets, this time the Court of Peter the Great.

These are based as individuals as there are no obvious vignettes and they will play various roles in my Frundsberg Frei Stadt. In line with this they have not been painted up as the specific historical figures that they represent
Posted by Fire at Will at 13:29 1 comment:

Some eye candy to add to my Napoleonic battlefields. After many years I found the first Strelets product their French Camp. It makes up into a number of nice vignettes, the only unusable item in the set is the wagon, which is far to crude to use.
Posted by Fire at Will at 17:22 3 comments:

While finishing the French camp I also completed a number of generals that had been hanging around for a while for various periods.

From left to right; Napoleonic Polish general from Strelets; a pair of French Revolutionary War Austrian colonels from Italeri (I've swapped some heads so I have a line and a grenadier colonel); A spare Italeri Napoleon converted to use as a French Revolutionary Wars general; and a WSS Austrian general (from the Revell SYW Austrian set) with a Strelets aide.
Posted by Fire at Will at 17:15 No comments:

I was was at the Derby show on Saturday and spent most of the day on the Lance & Longbow stand, still, it's quite useful to be in one place so other people can find you, so it was useful to meet a number of old friends and also meet some new faces from the forums I visit.

I did manage to get away for a short time, but I didn't find any bargains on the B&B so I had to get my fix from the traders. Even then I didn't find everything I wanted.

First off two packets of Zvezda Dragoons of Peter the Great, lovely figures, but I've some concerns. Firstly most of the dragoon horses are identical, which reduces the variety and secondly the plug in arms, which yet again done fit all that well. I de-sprued one packet to get a better look and to consider my options. The officer and one other figure (left) will be used for a command base; the dismounted figures and horse holders (centre) will provide the extra dismounted dragoons I need; finally there is enough mounted figures (right) to provide another mounted regiment.

I also went along and bought the figures that had been tempting me ever since the York show, the Plastic Soldier 20mm Russians. Again I got one sprue out of the packet and assembled them, they went together so easily and look tremendous. Trouble is I have an awful lot of Russians already so I need to consider carefully how I will use them. I'll probably paint up these few and then wait until the support weapons appear before making a final decision. 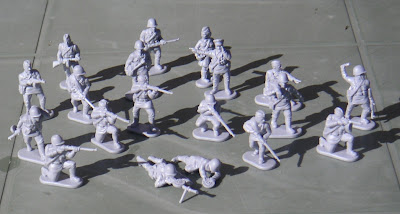 A long term project is to build a Afrika Korps force for Rapid Fire and one major requirement is for lots of Kubelwagens, so I made a start by buying these ready assembled and painted ones from Skytrex. 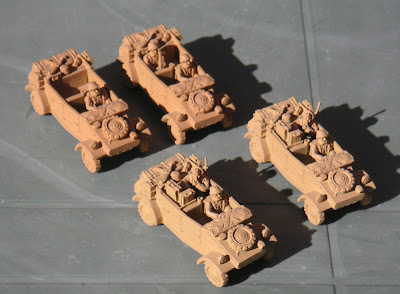 Finally I also picked up a cheap packet of Revell SYW Austrians for my next Frundsberg project
Posted by Fire at Will at 16:33 No comments:

Phew, quite exhausted with over a weeks walking on the coasts and hills of Pembrokeshire. But I did manage to fit in a number of sites on the way. 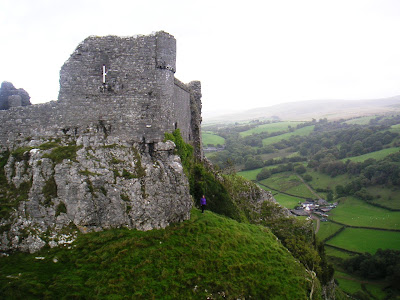 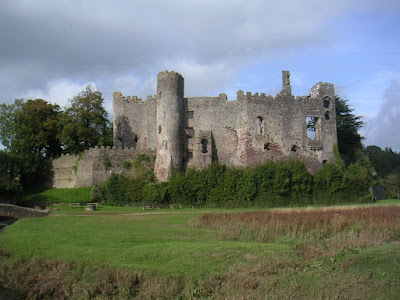 Carrew castle (Pembrokeshire council owned, so I didn't look inside as I had visited 20 years ago) 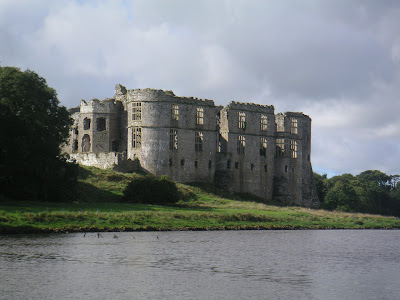 Pembroke Castle, (not CADW but well worth a visit) - William Marshall's tower 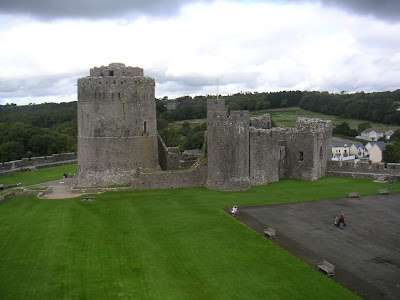 A model of the original 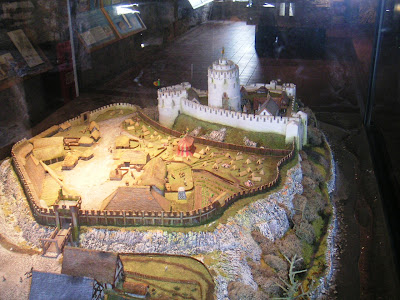 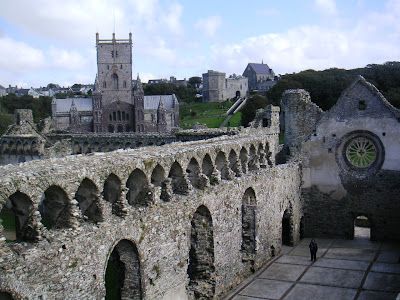 Cilgerran Castle, quite impressive for its location 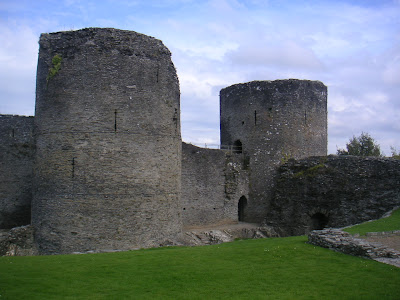 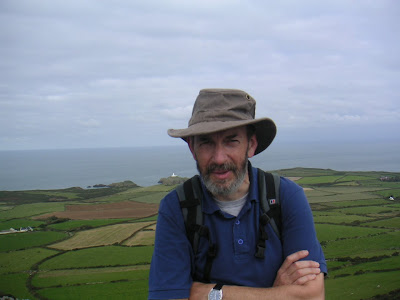