Quite a mixed bag of figures were needed to create my Dervsh cavalry. The majority are HAT Almoravid Light Cavalry mixed in with the Waterloo Emirs (remounted) some Airfix Bedouins and Strelets Mamelukes. Again like the infantry and camelry I've used different coloured patches to distinguish the units. 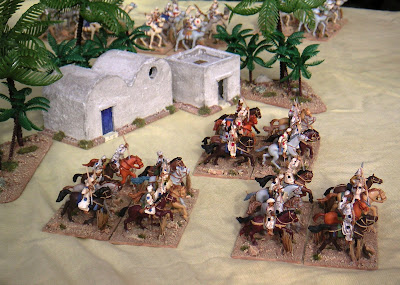 Good game using the El Teb scenario down at the club last night and much fun was had with a number of blunder rolls by the British (Martin). Now considering trying the Thud and Blunder campaign rules that are available on the Black Powder Yahoo group.

A great idea to use the HAT Almoravids! I will try it myself soon.

What I had in mind with these guys was them to let fight some British in 1685 Tangier but you are right, they are good for a few more hundred years:-)

Great stuff as always. I saw your earlier suggestion about using the Almoravids as Dervishes, and I immediately planned to copy you (including the other elements you have mixed in here). I doubt mine will ever look as nice as yours, and they certainly will take a lot longer to complete. Thanks for the inspiration!

marvellous employment and perspectives on your pictures! I like the different geographical places of warfares. Please post more pictures!
Monseigneur