We reconvened on Sunday to continue the battle. here are the positions taken just before we got started with the Prussians still holding both Ligny and St Armand. 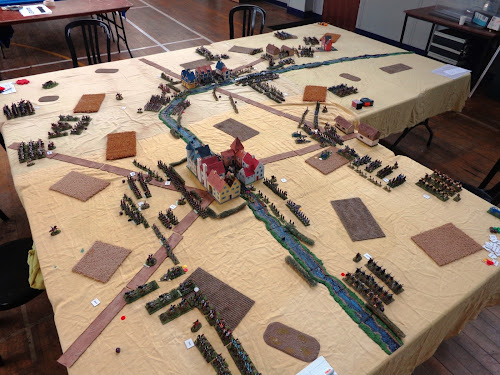 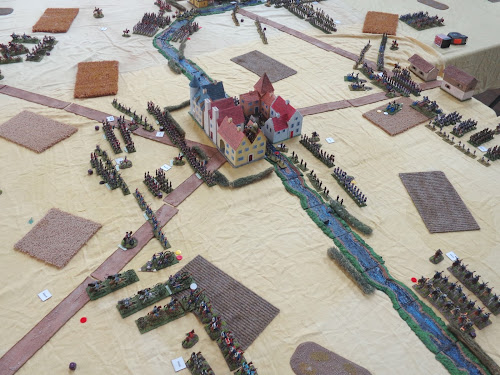 The Prussian threat to the the French left has been contained by the arrival of Walthier's cuirassiers. 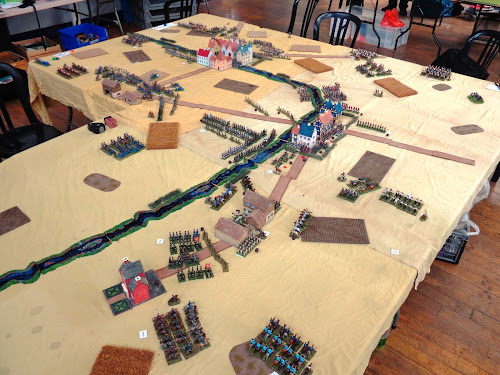 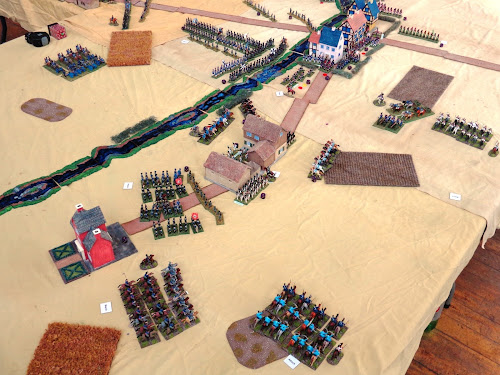 In the centre the French Young and Middle Guard are negotiating the Ligny brook. 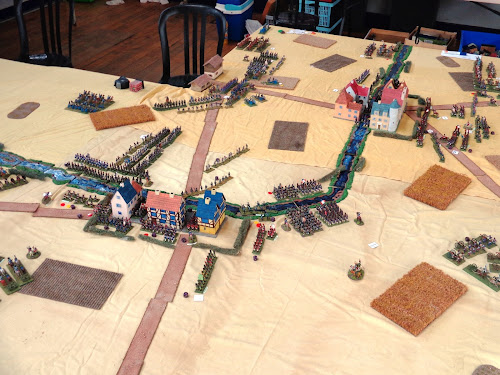 Walthier's cuirassiers clear away a Prussian cavalry brigade after one of it's unit was panicked by rumours of enemy to their rear, however the Prussian infantry have partly pushed their way into La Haye 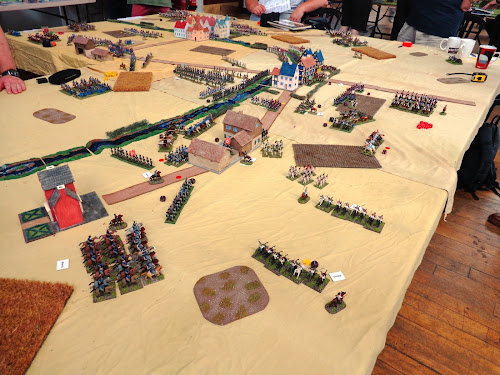 In the centre Prussian reserves move to close the gap in the centre and confront the Guard. In Ligny the Prussian Landwehr succumbed to artillery bombardment by the Guard artillery allowing Gerard to get a toehold in the village. 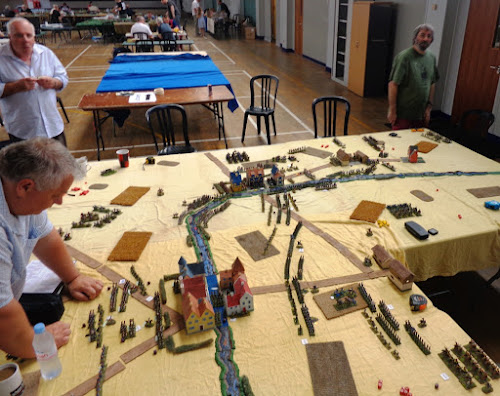 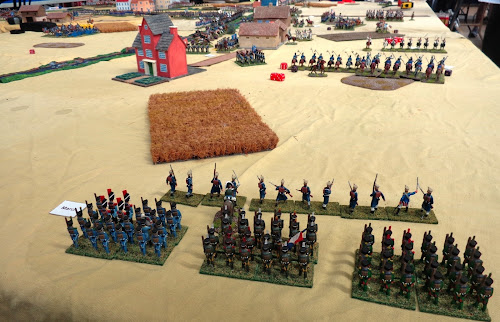 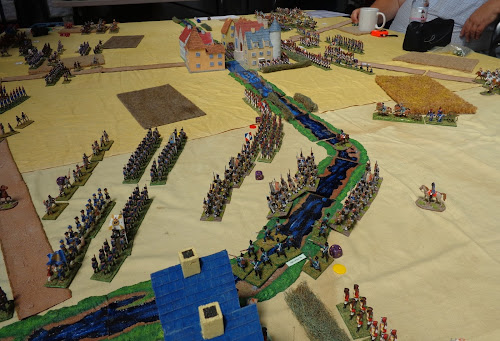 The cuirassiers were pushed back on the French left, but the Old Guard cavalry had arrived! 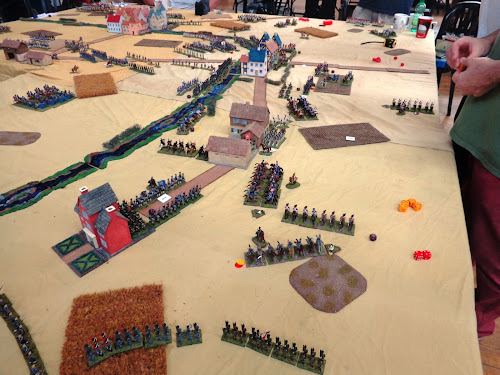 That wasn't expected!, a drawn combat between the Gendarmes d'Elite and the landwehr cavalry results in a draw with both sides shaken. In the mutual morale test both unit rolled low and were broken! 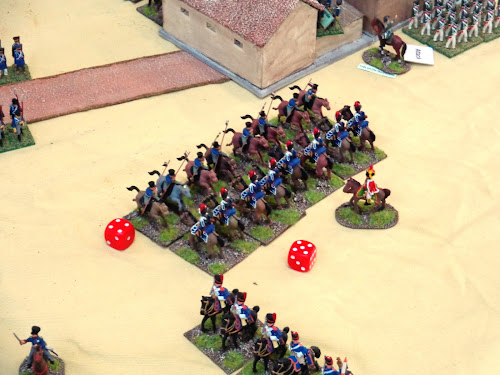 Another shock for the French two battalions of the Young Guard are broken. 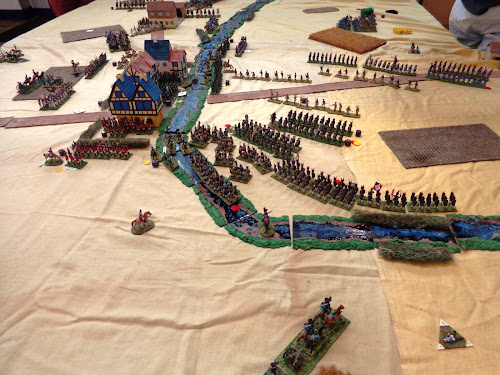 But by now the French have nearly captured the whole of Ligny, but one sector holds out. 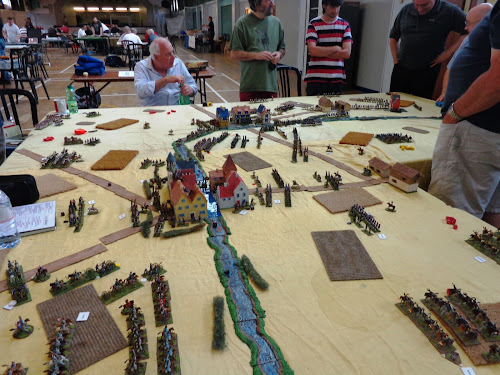 The position at close of play, the centre is stalemated for now, the Old Guard infantry never came forward to support the rest of the Guard, and in St Armand some fresh Prussians slipped back in after the exhausted French left them an opening! 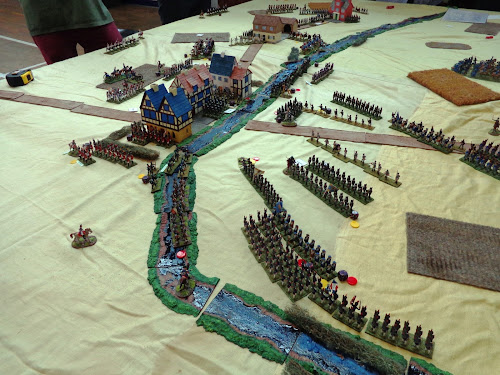 Overall everyone had a great couple of days and when the scores were tallied up it was a marginal Prussian victory.

Fabulous re-fight Will. The struggle for the villages, particularly LIgny, seems to have been of similar epic proportions to the real thing, as is expected.
Not expected were those bad results for the guard. I bet the French player was miffed?!!