My first two units for my French army of the revolution/Egyptian expedition era. The two units are the 7ieme Hussars (bis) and the 22ieme Chasseurs both of which were in Egypt.

The figures are an amalgam, the bodies are Revell SYW Prussian Hussars, as they have the mirliton with flame, and the horses are from the Italeri French Hussars and the Hat Chasseurs a Cheval respectively. I built them as full strength regiments (4 bases), although I will generally use a single "squadron" (2 bases) for most Egyptian battles. 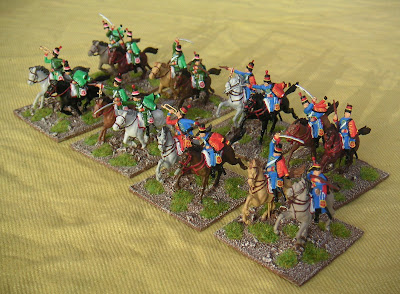 I enjoyed painting the these units and hopefully they will be in action soon once I finish the Mamelukes as I will then have enough units for both sides for a small battle.
Will
Posted by Fire at Will at 21:58

Very colourful figures! Do you think to paint French infantrymen with their typical egyptian hats?